When the Vikings attacked Paris: 10 jarring things you need to know 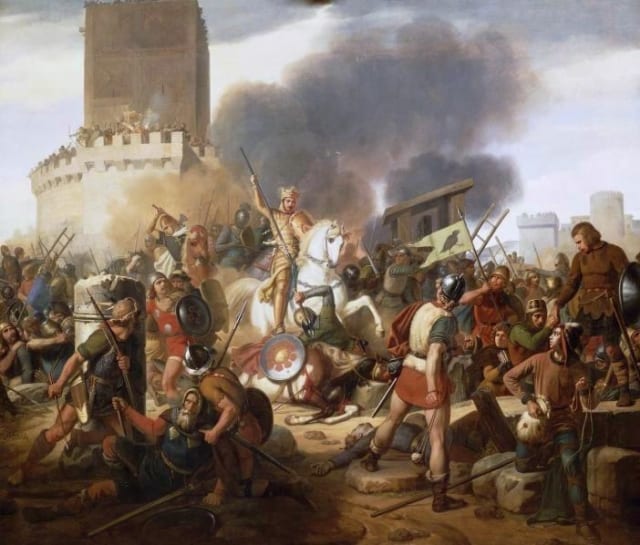 When the Vikings attacked Paris: 10 jarring things you need to know

People have inhabited what we now know as Paris since the 3rd century! The first tribe was a group of Celtics called the Parisii, which is where the name Paris stemmed from.

Paris began as a small riverside town and eventually grew to an important trading post. The waterfront location was really attractive to several other tribes and kingdoms as time went on. One group, called the Vikings, recognized the importance of Paris, and made it their mission to take over the growing city. Understanding the Vikings’ involvement in the formation of Paris is essential to understanding how Paris became the city we all know and love today.

Who knew that the Vikings played such a major role in forming Paris?! Well, it’s true, and here are 10 jarring things you need to know about when the Vikings attacked Paris in 885-886.

1. The Vikings were a really unique group 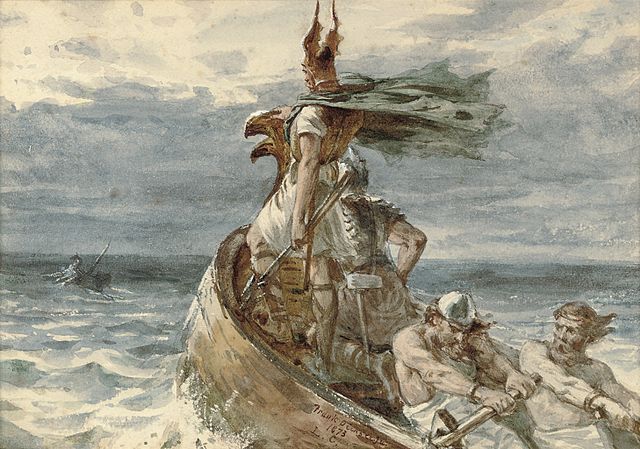 Before the days of trains, cars, and airplanes, people mainly stayed in the area that they were born for life. Leaving your village was unthinkable for people in the Middle Ages! Well, everyone except the Vikings.

The Vikings were a group of people who lived in Scandinavia, which in modern times is an area in Northern Europe made up of Denmark, Norway, and Sweden. This area was pretty special, as in Scandinavian tradition anyone who had royal blood has the right to be a king. This meant that there were constant battles over who was the ruler.

When things got a little too crowded in Scandinavia, the Vikings decided to expand their horizons to the rest of Europe. Royal Scandinavians who couldn’t manage to claim their kingship in their home territory began to try their luck at ruling other areas, including Paris.

2. This wasn’t the first Viking attack on Paris 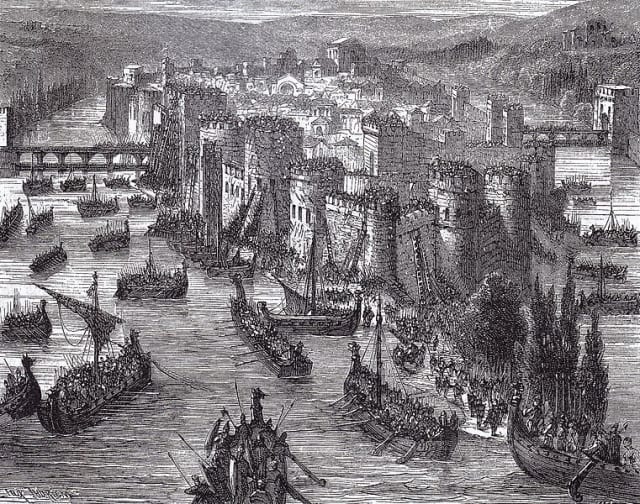 At the time, the people living in Paris were called Franks. The Frankish ruler was named Charles the Bald assembled his troops to try to defend the city from the Vikings. The troops were not able to fend off the Scandinavian invaders, and Paris was sacked and pillaged.

The Plague soon reached the Vikings and many of their men died. However, it took a bribe of 7,000 livres (the currency at the time) of gold and silver from Charles the Bald to get them to leave the city.

3. Paris was a really important stop on a trade route 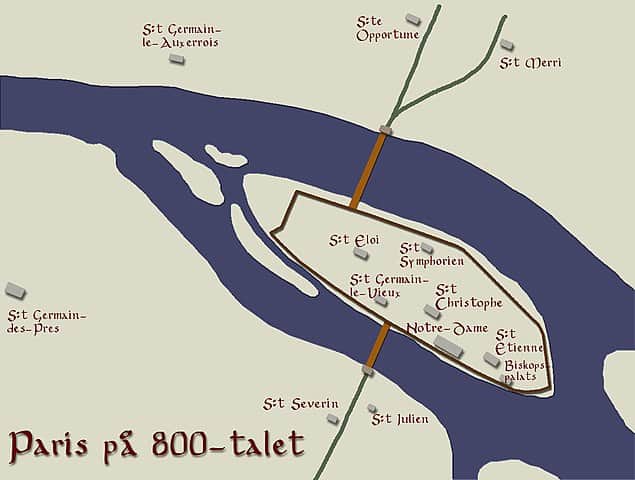 Reconstructed map of Paris, France, in the 9th century by Sven Rosborn – WikiCommons

One reason the Vikings wanted the control of Paris was that it was a really important stop on a trade route. The Ile de la Cité in the middle of the Seine River had been a major stop on the north to south trading routes since the 3rd century.

In the early days, Paris trading with other small cities in the vicinity, but as more time went on it was incorporated into longer trade routes. Control of this important trading stop would have been really attractive to the Vikings.

4. The Vikings tried to invade the city for years 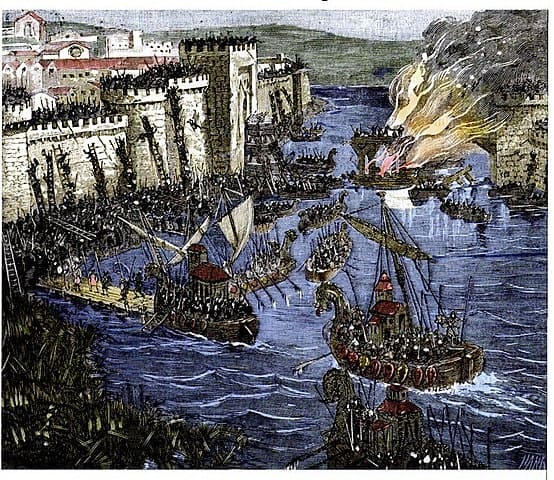 Although the Franks were able to get rid of the Scandinavian invaders in 845, the Vikings would continue to invade the city until the Siege of 885.

The Vikings would return to Paris 3 times throughout the 860s. Then, in 864, the Franks attempted to fortify Paris through the use of bridges that connected the mainland to the Ile de la Cité.

These footbridges did protect the city for some time, but when the Vikings arrived in 885, they were able to overcome Paris due to the fact that the Franks were under-armed and ill-prepared. 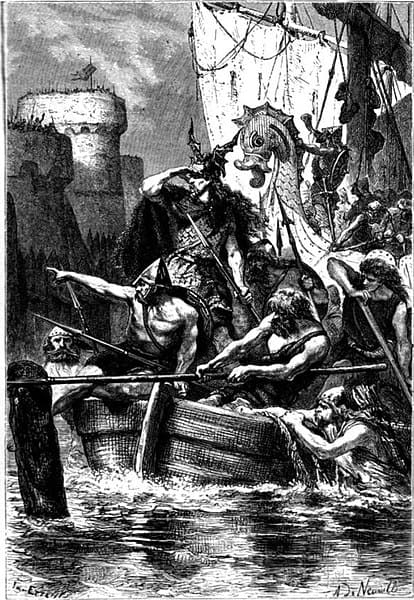 In late November 885, the Vikings began a siege on Paris. Before they arrived, Duke Odo of Francia constructed 2 towers to guard the footbridges that were up to that point protecting the city from outside invaders.

The Vikings originally asked Paris for tribute, or a tax, in order to avoid a violent siege. Paris refused, and the Vikings began their attack. They attacked the northeast tower with catapults, battering rams, and other medieval weapons. They also set three wooden ships on fire in order to take down the wooden bridge. They succeeded, and successfully overcame Paris.

Just because they were defeated doesn’t mean that the Franks in Paris didn’t put up a fight against the Vikings! In addition to constructing the two watchtowers, Duke Odo formed an army of about 200 men.

When the Vikings first arrived in 885, they were met with a shower of hot wax and pitch (a mixture made of tar). Then, when the three burning ships took down the footbridge, Parisians decided to ask for help. Duke Odo called on the Frankish leader, Charles the Fat, to step in and help them.

7. The Vikings left Paris after a few months 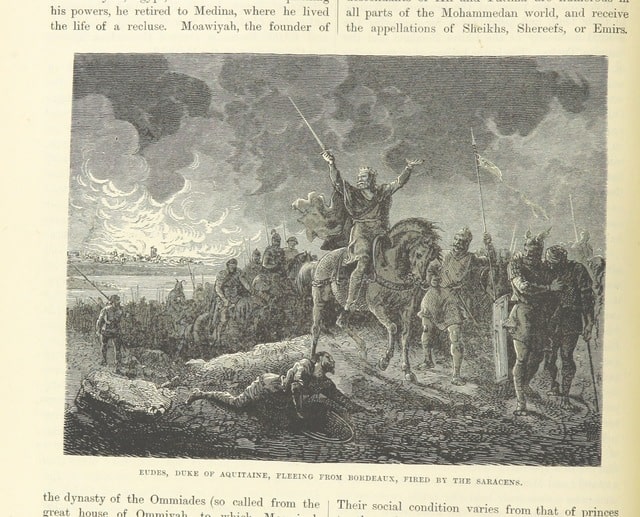 The Vikings are wanderers by nature, so it should come as no surprise that they soon became bored with Paris. After the footbridges were taken down, several Vikings decided to continue their pillaging elsewhere.

These Vikings moved onto the surrounding areas of Paris like Chartres and the Loire Valley. While they were gone, Duke Odo pleaded with the Frankish troops to help them. Henry, Count of Saxony, led a group of soldiers to Paris. The soldiers were already very weak from marching throughout the winter, and their efforts failed.

Then, Duke Odo managed to speak to Charles the Fat directly, and Charles agreed to help save the city.

8. The French leader bribed the Vikings 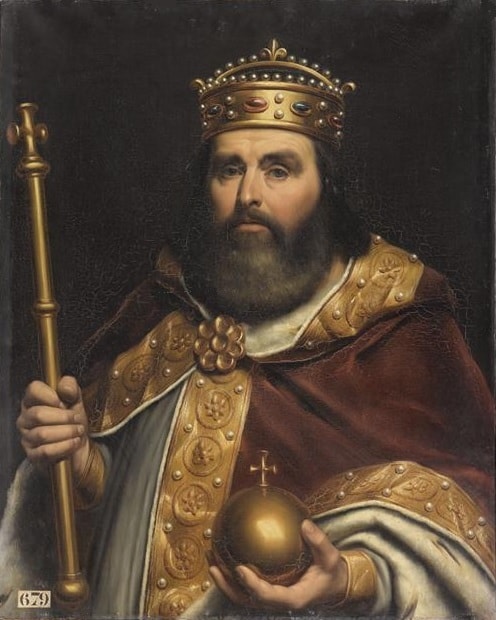 During the summer of 886, Duke Odo, along with Charles the Fat and his troops, arrived in Paris. They managed to fight through the Vikings and get into Paris. Then, in October, the Franks had the Vikings surrounded.

However, Charles the Fat did not want to fight with them. He decided to pay them a bribe of 700 livres to get them to leave. Not only did Charles pay them off, he also decided to let them pass through Paris in order to get to Burgundy, where they planned to continue to pillage.

9. Which caused Parisians to turn on him 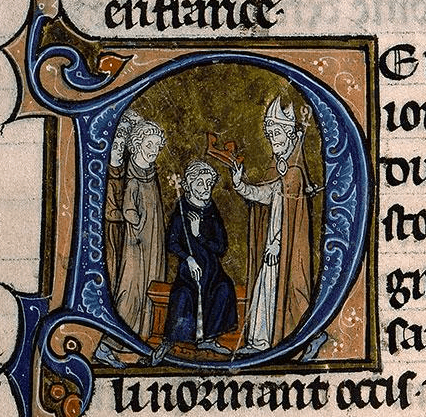 The Coronation of Duke Odo – WikiCommons

The Parisians were furious that Charles the Fat paid the Vikings off and planned to allow them to pass through Paris via the Seine. In the end, they refused to let them pass by the river and the Vikings were forced to drag their boats across the land in order to get by.

From then on, the Franks began to hate Charles the Fat due to the bribe. In 888, he died and Duke Odo took control of the kingdom. Under his rule, Paris remained safe from Viking attacks.

10. The attack marked a turning point in French history

The Siege of 885-886 marked a turning point in French history. Charles the Fat belonged to a Frankish dynasty called the Carolingians, and his death signaled an interruption in their rule.

As mentioned, Duke Odo was named king of the Franks after Charles the Fat died. His brother, King Robert, would rule after his death. This pair of brothers were a part of the Robertian dynasty, which was a branch of the famous Capetian dynasty. To help you understand their importance, the last King of France, Louis Philippe I, belonged to the Capetian dynasty.

The history of Paris is so rich, and there is so much to learn about how the City of Lights was formed. The Vikings played a major role in the creation of Paris, and I hope you enjoyed learning a bit more about the Siege of 885-886!

If you want to learn even more about the history of Paris, you’ve come to the right place. We offer plenty of walking tour options to learn all there is to know! Click here to take a peek at all of our options, and to make your booking!