Unique Places to Stay in Paris

Unique Places to Stay in Paris

Unfortunately Paris isn’t the kind of city where you’ll find accommodation in the form of an outdoor dome, or a portable mobile home you can park along a picturesque European coastline.

Paris thrives on class and practicality. The most unique accommodation you’ll find in the city are the themed boutique hotels that have taken their interiors to new levels of creativity.

Hotel Off Paris Seine in Paris

As it stands, I would class the Hotel Off Paris Seine as the most unique place to stay when visiting the French capital.

This is the city’s first floating hotel, built entirely on two giant hollow barges joined by a transparent communal space that runs through the center of the facility. The hotel encompasses two stories. 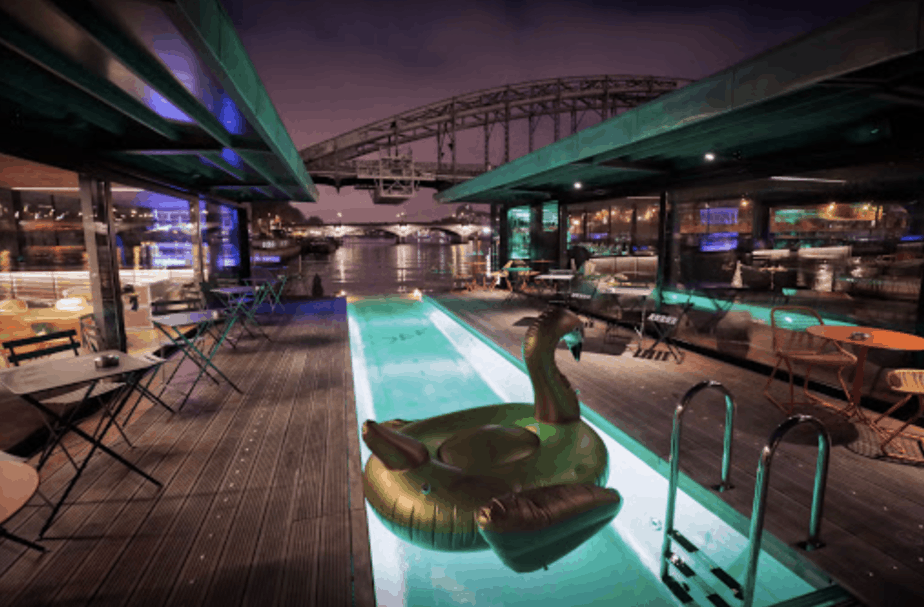 Floating on the Left Bank of the river Seine, not far from the Notre Dame Cathedral, this hotel has taken the city by storm. Being able to sleep on the calm water’s of one of Europe’s most famous rivers is attracting travelers from all over the world.

The hotel design is distinctly modern. All of the rooms feature natural light and brightly colored furniture. Hot tubs can be added at additional cost.

Since swimming is not permitted in the Seine, the middle communal sector that connects the two barges is fitted with a pool that runs through the center.

The story of how the Mason Souquet came to be a form of accommodation in Paris is what makes is distinctly unique.

You’ll find this lap of luxury in Piaglle, just next door to the Moulin Rouge and surrounding restaurants.

Prior to and during the Revolution, Pigalle became the unofficial red light district of Paris, and the remnants of this time remain here today. It was known as the sleaziest yet most fun neighborhood in the city; filled with brothels, strip clubs and even an opium den. 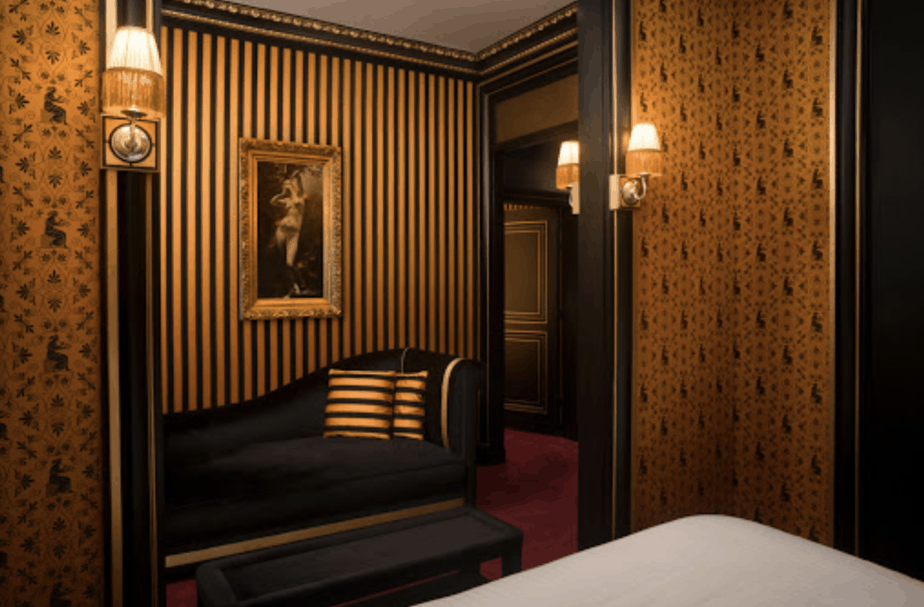 The Mason Souquet was built into an abandoned brothel; the most famous one in all of Pigall, in fact. It was known to have attracted kings from across the continent, and important individuals from around the world.

Today the hotel is one of the most opulent places to stay in all of Paris. The interior architecture has been retained, and there is a distinct brothel-like appeal to the dark, intimate design of the rooms.

When I consider the name and the look of this hotel in the 2nd arrondissement, it gives me the visual of a child sitting in front of blank paper, designing a hotel interior using a pack of brightly colored crayons.

That’s exactly what each of the rooms inside of Hôtel Crayon Rouge look like, only a lot more classier than a child would probably manage. 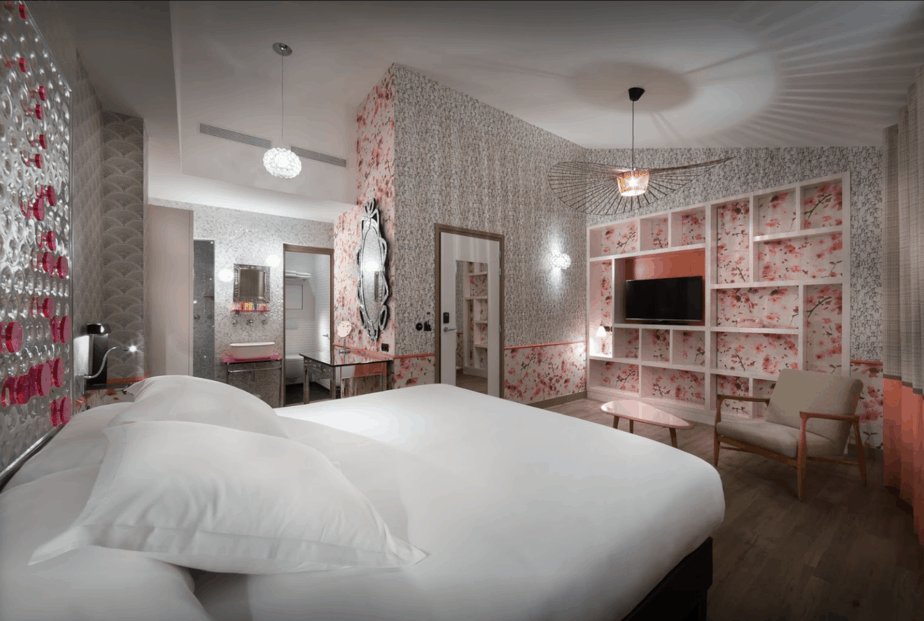 This hotel takes itself seriously, but in a quirky, funky way that you rarely see in boutique hotels in Paris. While most of them opt for a 1920s or French Cinema vibe, this one went in the direction of a wonderland.

It’s 70s nostalgia, if you will, combined with a taste of 90s chic.

They also do a wonderful breakfast buffet each morning!

Vice Versa is a bit over the top for my personal taste, but unique it is indeed.

The entire space is the definition of kitsch; I can’t imagine what conversation took place in the business meeting prior to this hotel’s creation.

There are seven levels to this hotel, and each one has been designed to reflect one of the seven deadly sins. Yes, read that again. 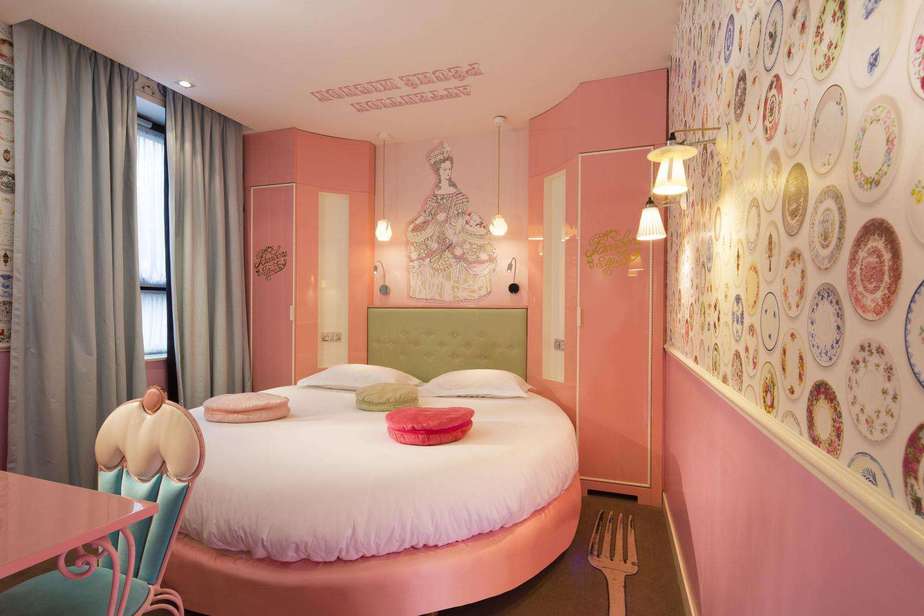 The floor representing gluttony, for example, looks like the inside of a children’s cupcake shop, complete with a cake-shaped chair and teapots for lamps.

The communal space was made to represent heaven; giant angel wings made of white feathers watch over you as you hesitantly maneuver your body around the all-white furniture and floors.

Don’t even get me started on the floor representing greed…

A Hotel in the Palace of Versailles near Paris

This last unique place to stay in Paris isn’t quite in Paris at all. It also doesn’t actually exist… yet.

The Palace of Versailles is the most popular trip for travelers to take outside of the city. Most treat it as a day trip, getting all of their sightseeing done in under a day or perhaps spending one night in the main village.

This year, a tender was put into motion that intends to occupy three sections of the Versailles Palace in order to build a luxury hotel on the historic grounds. 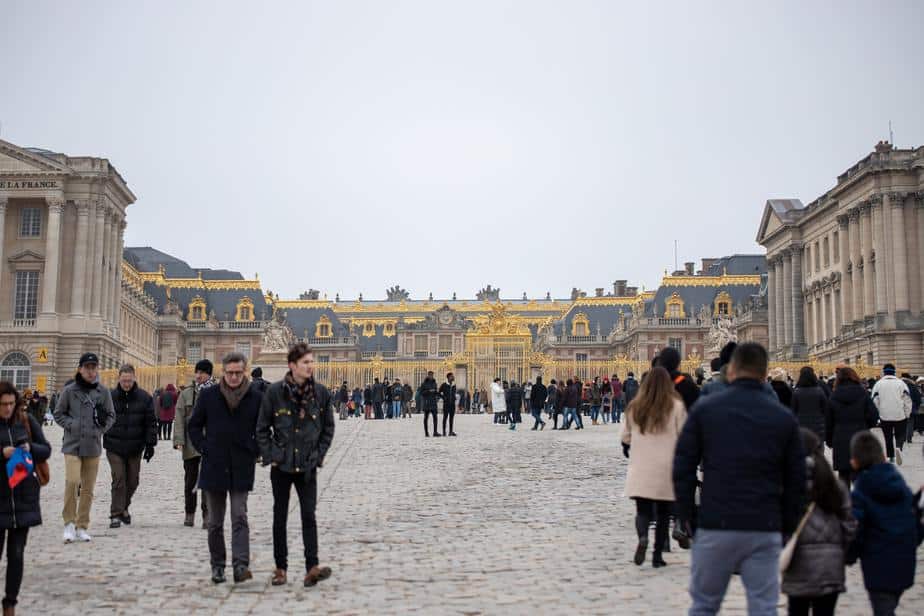 So far, the hotel is estimated to cover 2,800 m2 of the palace grounds, and will cost between eight and fourteen million euros to complete. The Versailles locals are supportive of the additions, seeing this as an important improvement to the historical monument.

While this might not be an accommodation option yet, once completed, the hotel in the Versailles Palace will be France’s most unique place to stay for those who can afford the experience.

For now, let’s stick to what is currently in existence, like the free guided walking tours through both Paris and Versailles. With accommodation covered you really only need to worry about exploring the city, and these are the best ways to do just that!