Top 10 things to do near Gare Montparnasse 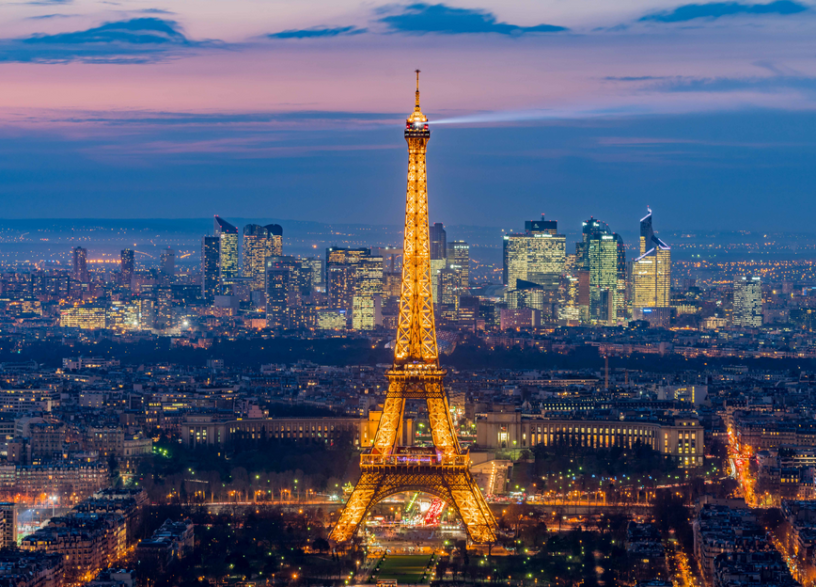 Top 10 things to do near Gare Montparnasse

The Gare Montparnasse is one of Paris’ busiest train stations and serves the regions to the West and Southwest of Paris. Fortunately, the Montparnasse station is located on the border of several arrondissements; making exploring Paris easy even on a short layover.

So whether you’ve got a train transfer or just want to kill some time before heading to the station, there’s plenty to see and do nearby. Here are the top 10 things to do near Gare Montparnasse. 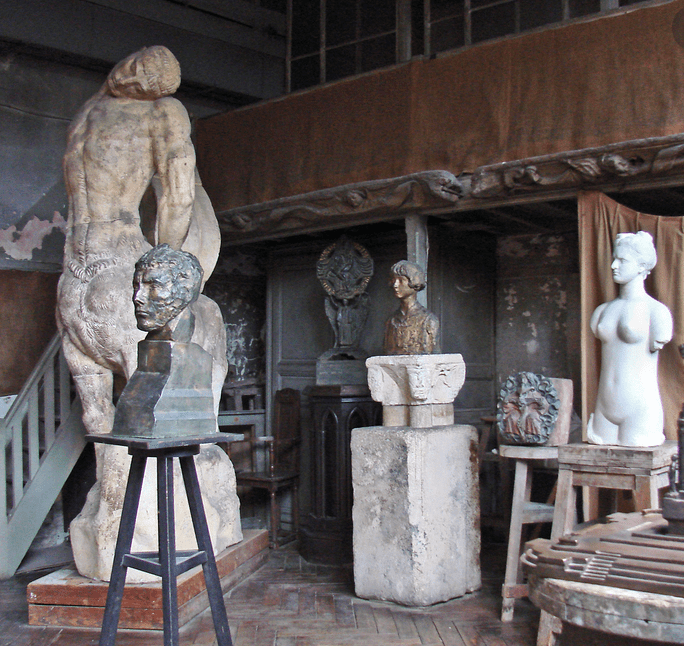 Have some extra time at Gare Montparnasse? Why not head to a museum! Musée Bourdelle features the works of Antoine Bourdelle, a famous French sculptor and student of Rodin. In addition to the galleries, you’ll get to visit his former studio and sculpture garden. The museum is located just a short walk from Montparnasse station, so it’s a great stopover if you’ve got a couple hours to kill. 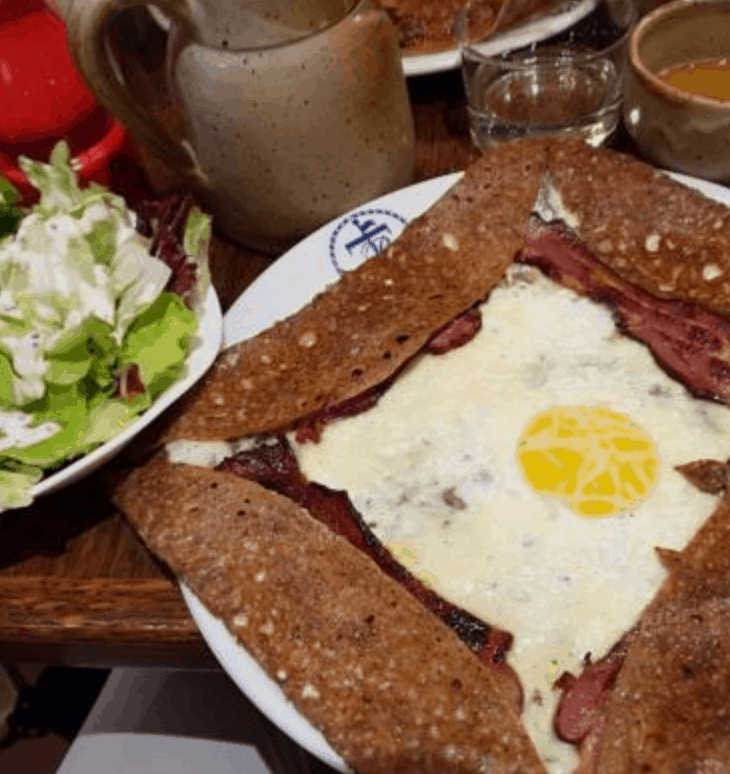 Photo courtesy of Ty Breiz – Uploaded by them

The neighborhood surrounding Gare Montparnasse is home to a ton of traditional French crêperies. My favorite is the Ty Breiz crêperie, which is just a five minute walk from the station. Here you can try a selection of authentic Breton crêpes, both savory and sweet. And you can choose whether to dine in or take out, so it’s easy even if you have to rush back for your train.

3. Take in the best view of Paris from Montparnasse Tower 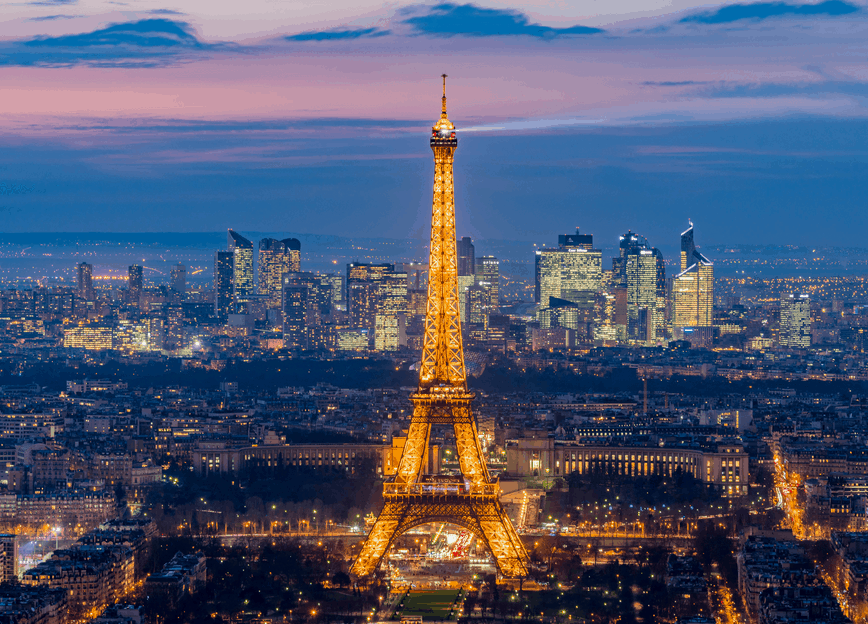 Many people don’t know that the best view of Paris is actually from the top of Montparnasse Tower. Standing 59 stories high, the Tour Montparnasse is the tallest building around. The 360-degree view from the observatory is unparalleled so you’ll see all the Parisian monuments – without the eyesore of the tower itself!

Just a two minute walk from the Gare Montparnasse station, a visit to the Montparnasse observatory is well worth it. And you can book your tickets in advance, if you want to squeeze in a visit before your train leaves!

4. Go for a stroll in the Cimitière du Montparnasse 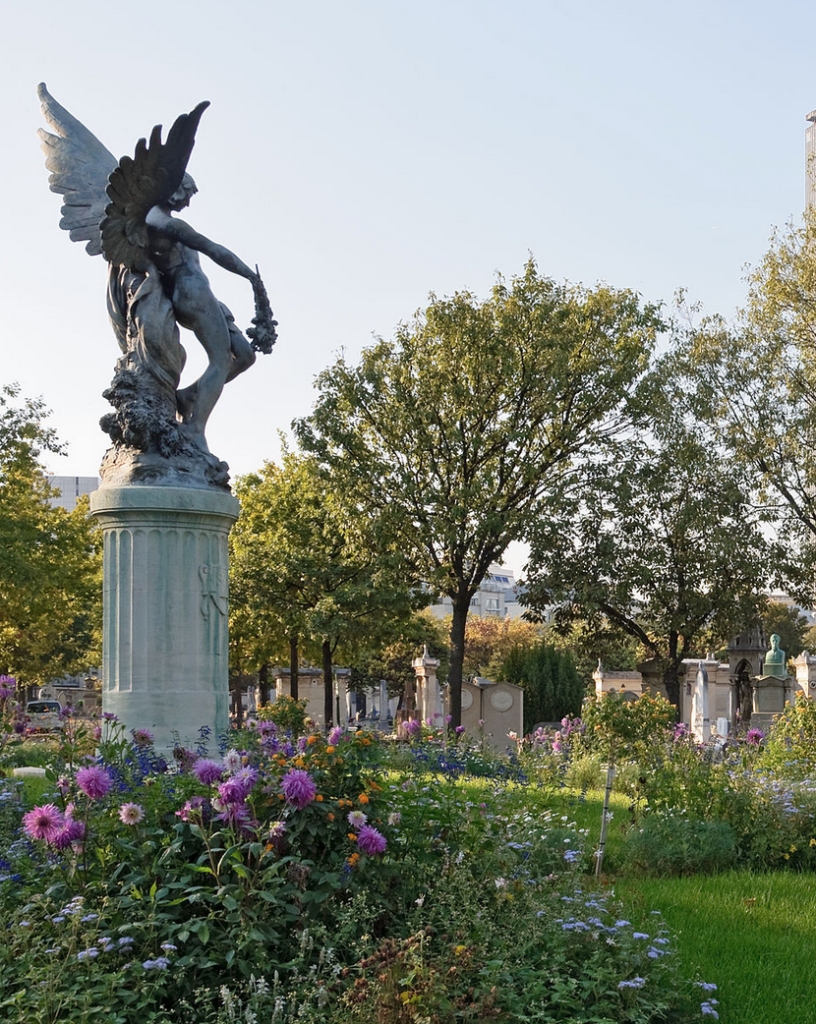 While a cemetery may seem an unlikely fit for one of the top ten things to do near Gare Montparnasse, but I think you’ll be pleasantly surprised. The Cimitière du Montparnasse isn’t your typical cemetery, but rather more like a city garden. Cobblestone pathways lead in between elaborate tombs and statues, all beautifully interspersed with flowers and greenery.

This is actually the city’s second largest cemetery and is where many of the Left Bank artists and writers are buried. You can visit the tombs of Charles Baudelaire, Serge Gainsbourg, and Simone de Beauvoir here. 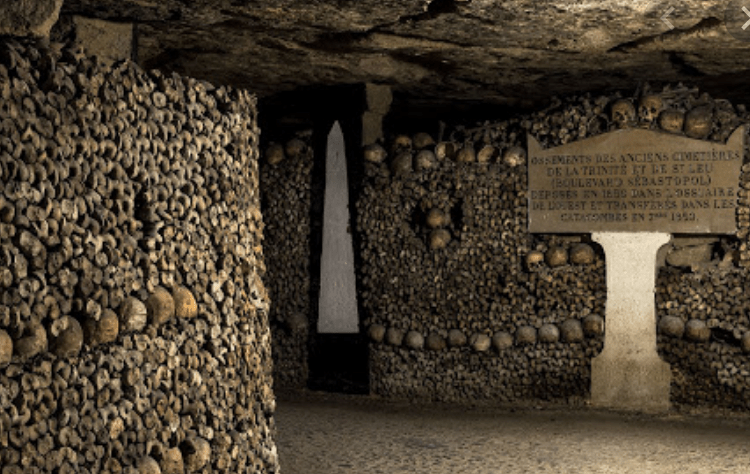 The Paris catacombs house the bones of over six million Parisians. Their remains were uprooted from the city’s overflowing cemeteries and moved to these abandoned quarries during the late 1700s.

While the catacombs are decidedly one of the city’s creepier attractions, they are very popular nonetheless.  The catacombs are easy to get to from Gare Montparnasse, and you can walk there in about fifteen minutes, or take the metro and be there in ten. But to make to most of your visit, I’d recommend giving yourself a few hours as the entrance queues can be quite long.

6. Check out some contemporary art at Fondation Cartier 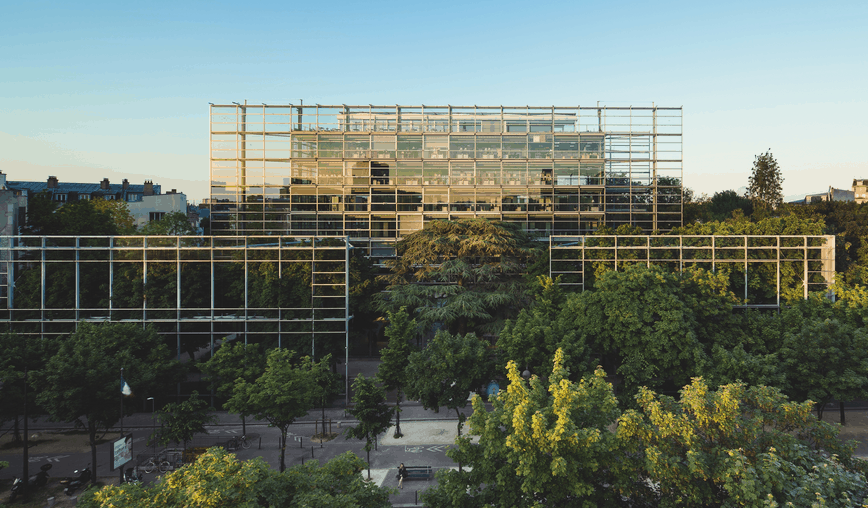 Photo courtesy of Fondation Cartier – Sourced from their official website

The Fondation Cartier is a contemporary art museum in Paris’ 14th district. Here you’ll find contemporary art from big names as well as little known artists. The collections span every medium from photography to design and even film making.

And this is one museum that’s just as impressive from the outside as it is inside. The bright, glass pane building encompasses a lush garden – all designed by Jean Nouvel. Back in 1984 the President of Cartier gave the museum to Paris, and the space has been open to the public ever since.

If you’ve got an hour or more to spare, a visit to this museum is one of the best things to do near Gare Montparnasse. And it’s conveniently located on Boulevard Raspail, just a few minutes from the train station.

7. Relax in the Jardin du Luxembourg 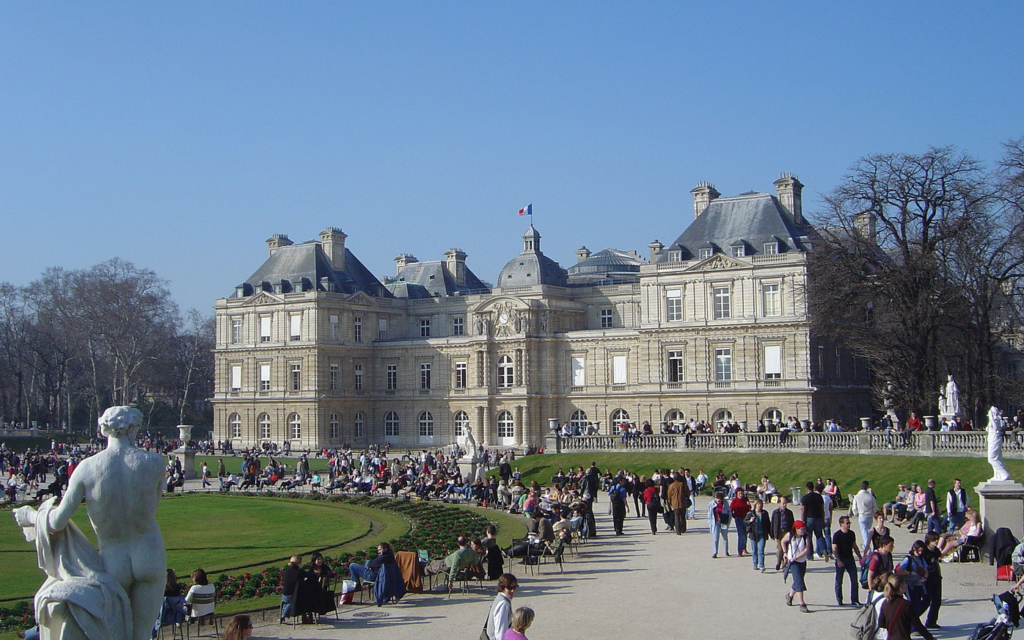 One of the city’s most beautiful parks is just a short walk from the Gare Montparnasse. The Jardin du Luxembourg covers 23 hectares. It’s a tranquil escape right in the middle of Paris! The garden was created in 1612 by Marie de Medici, the wife of King Henri IV. A lot of the original architecture and statues remain today. And in fact, if you head to the northeastern edge of the garden, you can visit the Medici fountain which has been especially well-preserved.

The garden is separated into two halves, French gardens and English gardens. They meet in the middle at the large fountain and frame the Senate building just behind. While there are several restaurants and food stands in the park, my advice is to bring a picnic. Pick a nice quiet spot, pull up a chair and enjoy your picnic like a true Parisian.

8. Go to the Eglise Saint-Sulpice 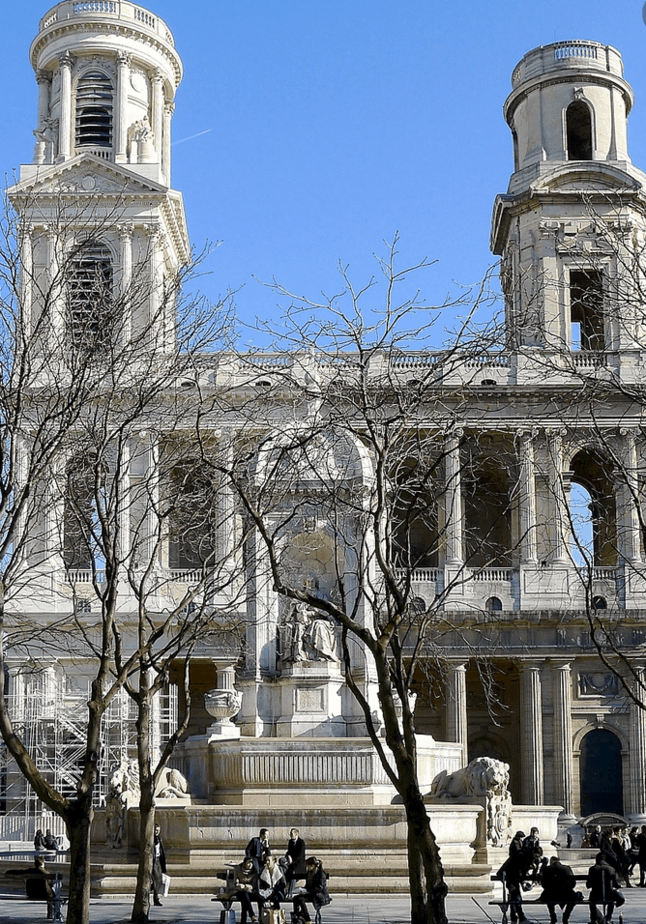 Easily recognizable from its two stone towers rising above the city, the Saint-Sulpice cathedral is one of the city’s largest and most important churches. Constructed in 1646, Eglise Saint-Sulpice has survived a very long time.

And thanks to a hefty feature in The Da Vinci Code, the church is more iconic than ever. Plus, now that Notre-Dame is under repair, all of Paris’ church events and religious holiday services are held in Saint-Sulpice.

Despite its location in the 6th arrondissement, it’s actually within easy walking distance of the train station, or take the metro to be there in a flash. You can have a stroll through the Baroque impressive church; the high ceilings are accented by intricate yet huge stained glass windows. Once you’ve visited the church, why not enjoy a coffee by the fountain afterwards. And if you still have time, join our guided walking tour of the area!

9. Do some shopping at the Bon Marché 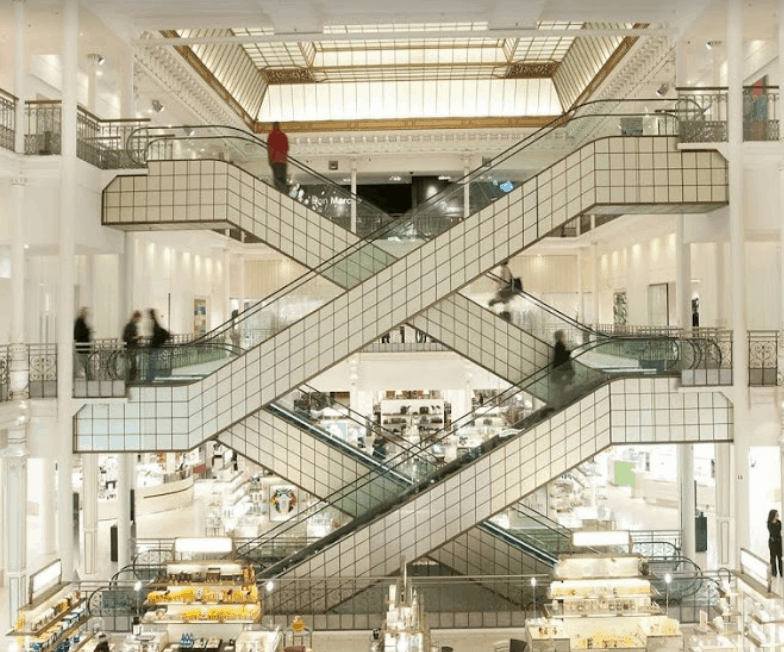 The Bon Marché – Photo sourced from their official website

The Bon Marché is one of the city’s nicest department stores. While not as famous as the Galeries Lafayette or Printemps, the Bon Marché is decidedly higher end. You’ll find three floors dedicated to apparel and luxurious fashion (most designers have a corner boutique in the store). But they also sell accessories, jewelry,  furniture, and home wares making this a great spot to gift shop.

If you’re hungry, there are plenty of options. Head next door to their gourmet grocery store La Grande Epicerie for an array of gourmet restaurants and deli style food counters. Or grab supplies for a picnic on the train, you’ll thank me later.

And luckily, the Bon Marché is actually located near Gare Montparnasse (within easy walking distance). So you’re in luck if you’re hoping to fit in a bit of shopping or a gourmet meal before your train! 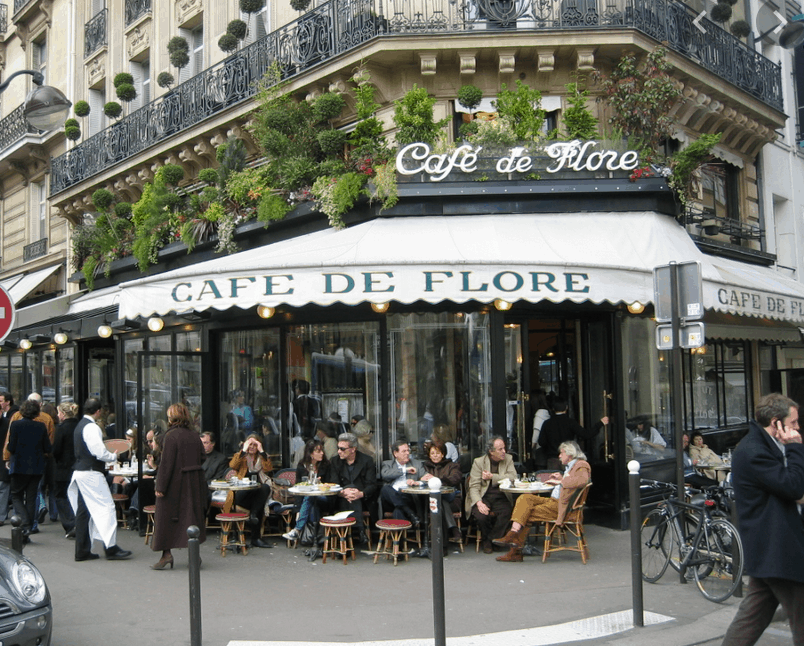 One of the best things about traveling through the Gare Montparnasse is it’s so central. You can pretty much explore the Left Bank no problem, even on just a quick stopover.

One of my favorite areas near Gare Montparnasse is the Saint-Germain neighborhood. Historically the center of the café movement and home to artists and Belle Epoque thinkers, Saint-Germain has a special vibe. The Boulevard Saint-Germain is home to plenty of historic cafés and upscale boutiques if you fancy some shopping.

From Gare Montparnasse, you can be in the heart of Saint-Germain in just 7 minutes, or about 20 minutes on foot (you can cut through the Jardin du Luxembourg for a more scenic route). So if you’ve got a couple hours before your train, come explore the ins and outs neighborhood on our guided walking tour!