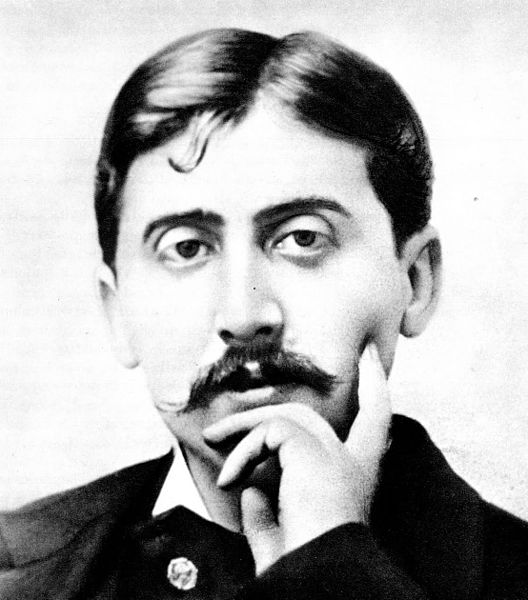 Marcel Proust is a renowned French author that lived and worked in the 19th and 20th centuries. This guy really loved to write, and produced the longest novel ever published. Most, if not all, of his works are semi-autobiographical, and touch on his childhood and adult life as well.

Proust’s works have inspired countless other authors, and there is even an expression in French that originated from his masterpiece. He lived an interesting life and there are plenty of fascinating facts about him. Keep reading to learn my favorite 10 interesting facts about Marcel Proust!

1. Marcel Proust was born during a tumultuous time in France’s history

Marcel Proust was born in 1871 in an area of the 16th arrondissement in Paris called Auteuil. This area is known as being one of the most expensive places to live in the city, and many wealthy families lived (and still do!) there. 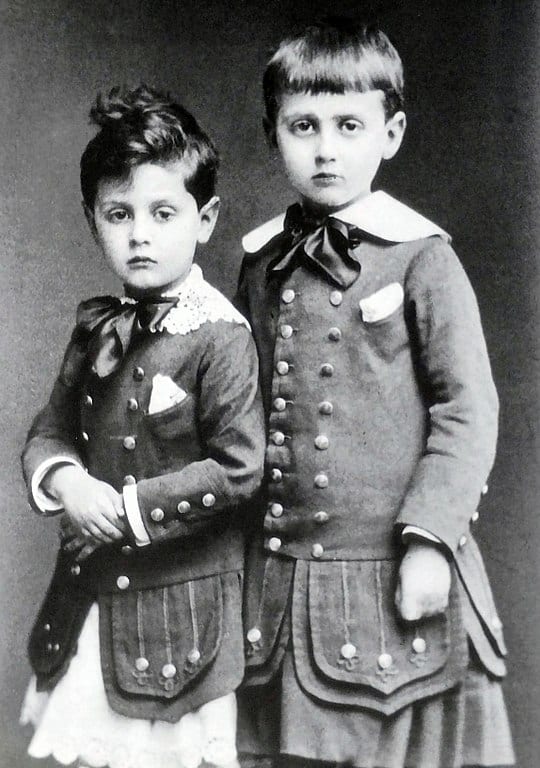 Robert and Marcel Proust (right) in 1877 by Modeste Chambay – WikiCommons

Proust’s father was a pathologist, which means he studied the cause of diseases, and his mother was known for her interest in writing and reading. She even went on to help Proust translate British author John Ruskin‘s works.

Proust was born at the end of the Franco-Prussian war, and was just an infant during the uprising of the Paris Commune in 1871. Much of his writing reflects the massive changes that were occurring in France at the time. Notably, Proust reflects on the decline of the upper class, and the rise of the middle class.

2. Marcel Proust is best known for his seven volume novel, In Search of Lost Time 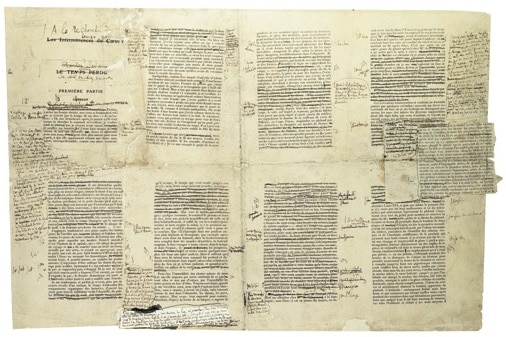 In 1909, Proust began to work on what would become his masterpiece. À la recherche du temps perdu (In Search of Lost Time) is a seven volume novel that took Proust nearly 13 years to complete.

The novel follows the narrator’s reflections on his childhood and adulthood in Paris in the 19th and 20th centuries. It is generally considered Proust’s masterpiece, and has been translated into several languages.

The novel touches on themes such as loss of time, lack of meaning, memory and social changes happening in France at time. It was published in France between the years of 1912 and 1927.

Since its publication, In Search of Lost Time, has awed critics and inspired several authors like Virginia Woolf and Vladimir Nabokov. 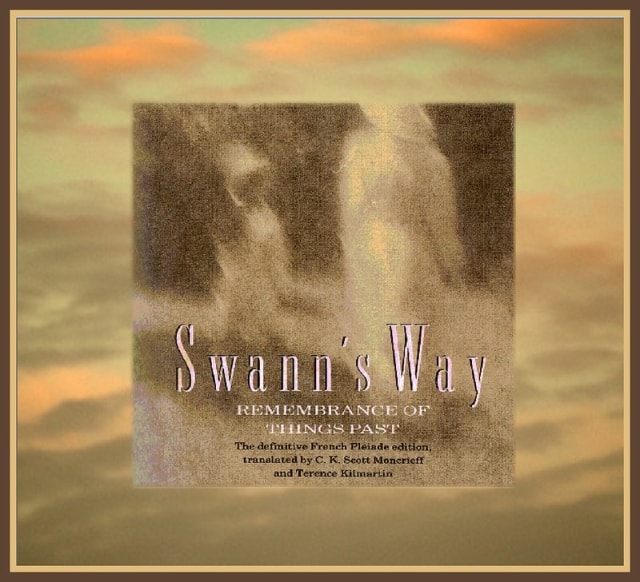 In Search of Lost Time comes in at a whopping 3,200 (the word count sometimes reaches 4,000, depending on the edition) pages and contains over 1.2 million words. The length can make reading the novel intimidating, and I personally have only made it through the first volume!

Proust worked on the novel from 1909-1922, and he was known for editing and adding new material to finished volumes throughout the years. It is assumed that he knew the structure of the novel since the beginning, but this didn’t stop him from going back over his work and editing it.

The last 3 volumes of the novel are generally considered as unfinished, as Proust died before he had time to reread and edit these sections. His brother Robert oversaw the publication of these volumes after Proust’s death.

The 7 volumes are as follows, in English: 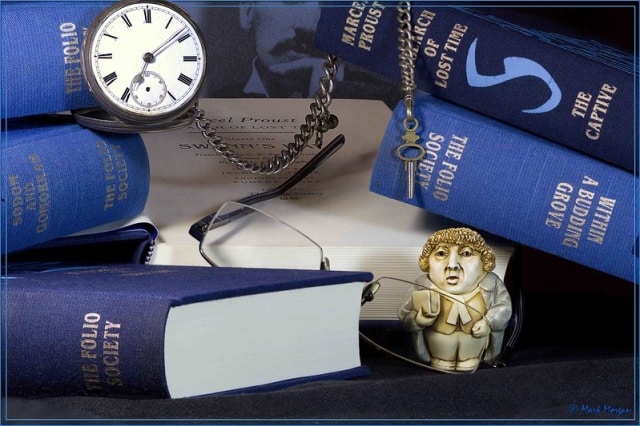 In Search of Lost Time by Marcel Proust. Image by Mark Morgan – Flickr

5. Marcel Proust’s masterpiece was turned down by several publishers 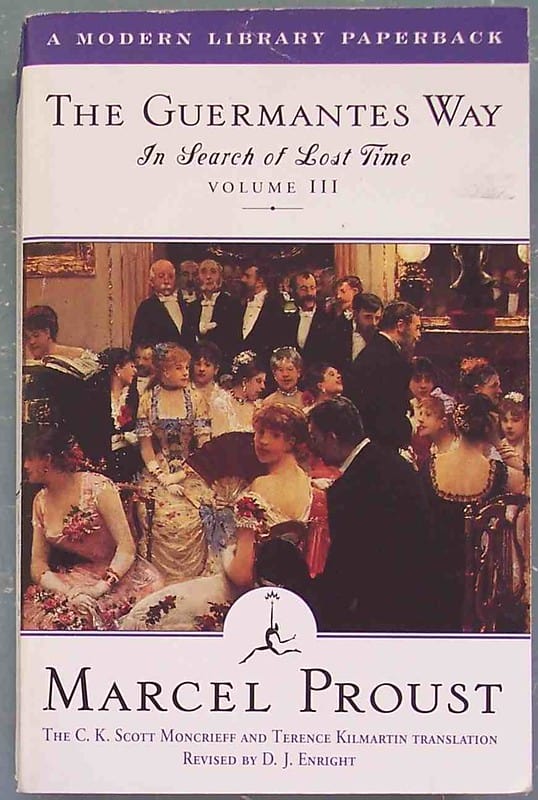 In Search of Lost Time Volume 3: The Guermantes Way by Drümmkopf – Flickr

When Proust sought to publish the first volume of In Search of Lost Time called Swann’s Way, several different publishers in Paris turned him down. The famous writer André Gide was given the manuscript, in the hopes that he could push the Nouvelle Revue Française, a literary magazine, to publish it. Gide also rejected it. Gide went on later to apologize to Proust, telling him that it was the biggest mistake of his career.

Feeling discouraged, Proust decided to publish the book on his own dime. The publisher Grasset agreed to publish the first volume, if Proust paid for it. Swann’s Way was published in 1913, and was met with critical acclaim.

After the success of the first volume, the publishing house Gallimard (which also published the Nouvelle Revue Française) offered to publish the remaining volumes. This time it was Proust’s turn to turn them down, and decided to stay with Grasset. 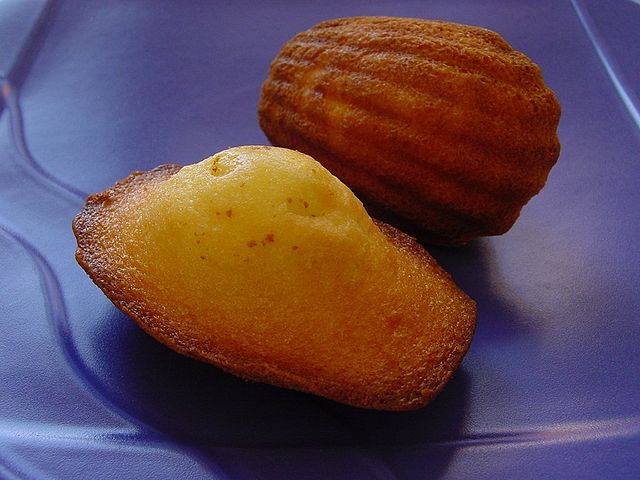 The madeleine cakes that inspired Proust by Bernard Leprêtre – WikiCommons

The French expression, “La madeleine de Proust ” (Proust’s madeleine) references a section in Swann’s Way. The section describes a moment in which the narrator’s mother serves him a madeleine and tea. Proust describes the moment in great detail, and the narrator that it reminds him of a time when his mother gave him the same snack as a child.

In the book, the narrator is overwhelmed with the emotions and memories that come flooding back when he eats the madeleine. It is just one of the many moments in In Search of Lost Time that examine memories and the affect they can have on a person’s life.

You can use the expression when you want to describe something that inevitably reminds you of something from your childhood. For example, my mom would always make me hot chocolate on Christmas Eve, and whenever I drink hot chocolate I am taken back to these moment. Hot chocolate is my madeleine! 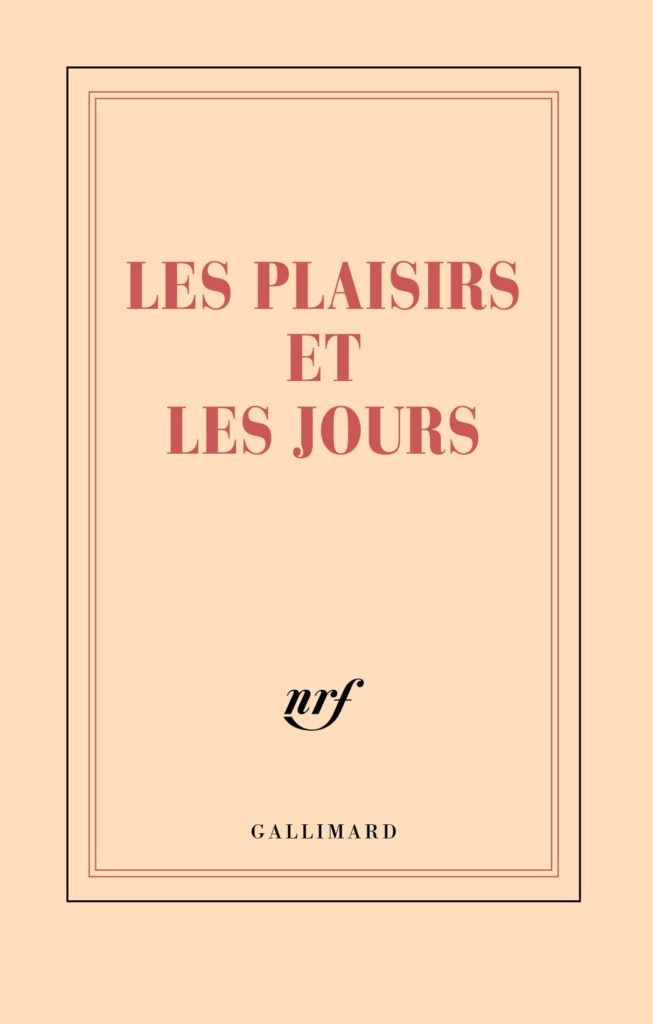 Proust is by far most well known for In Search of Lost Time, but this wasn’t the only piece of writing that he produced! When he was in school, he published articles in several different literary magazines. He also contributed a society column to the journal Le Mensuel.

He helped to found a literary review called Le Banquet, in which he published several pieces.

In 1896, Proust published a collection of poetry and prose called Les plaisirs et les jours (Pleasures and Days). The book included an introduction from Anatole France, a prominent novelist at the time, and illustrations by Madeleine Lemaire, who was a famous French painter.

Proust also began working on a novel in the same year. It is called Jean Santeuil, and was published posthumously in 1952. It is considered unfinished, as Proust gave up working on it in 1899. Critics say that it contains inklings of the same themes that can be found in In Search of Lost Time, although they aren’t as well developed as in his masterpiece. 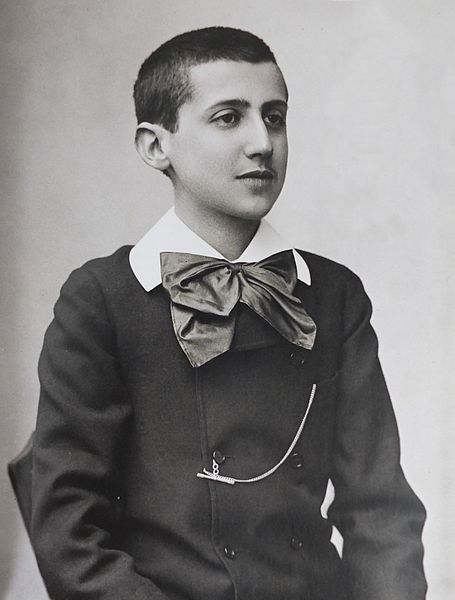 I already mentioned that Proust’s father was a pathologist. Bizarrely enough, his own son had a disease in which he could not explain the cause. In the late 19th century, doctors weren’t aware of the causes of asthma.

Proust’s asthma had a long lasting affect on his life. He had his first serious attack when he was just 9 years old, and from then on he was considered a “sickly” child. Although he excelled in school, he was constantly sick.

After Proust’s mother died in 1905, his health continued to get worse and worse. Due to his illness, he was known to sleep all day, and stay up all night writing in bed. He spent the last 3 years of his life confined to his bed. 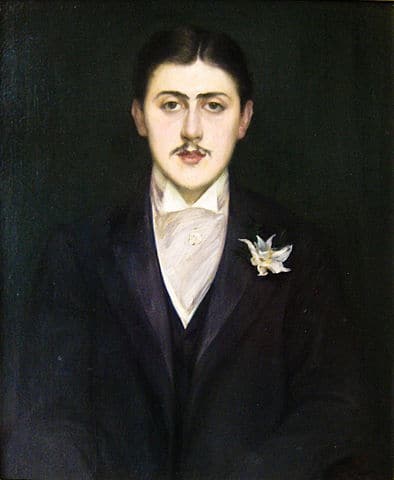 Proust never officially came out as being gay, but this is understandable if you consider the pressures of the day to be heterosexual. Despite the fact that he never came out, his friends and family were aware of his sexual preferences.

There are many references to homosexuality in Proust’s works. One of the main characters in Sodom and Gomorrah is a closeted gay man, which one can assume was inspired by Proust’s own personal experiences.

Proust was secretly in love with his secretary, a man named Alfred Agostinelli. Critics say that Proust based the character Albertine, a woman who the narrator of the story obsessed over, on Alfred. Albertine emerges for the first time in In the Shadow of Young Girls in Flower.

Proust was so in love with his secretary Albert that when he expressed an interest in flying, Proust bought him an airplane. Albert would go on to tragically die in the plane.

10. Marcel Proust planned to end his masterpiece after just 5 volumes 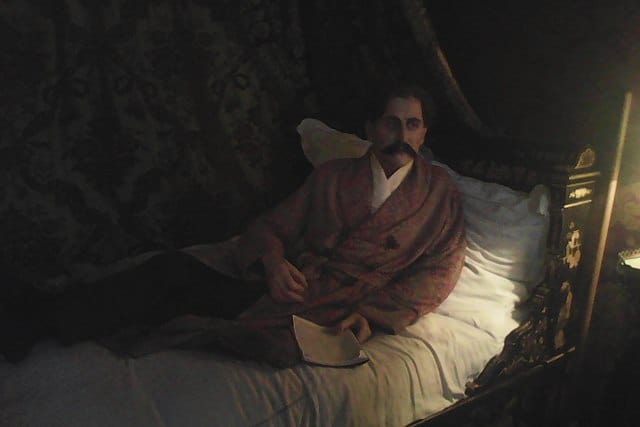 I already mentioned that Proust was confined to bed rest during the last 3 years of his life, but that didn’t stop him from continuing his craft. Although Proust was ill, it seems that his illness inspired his writing, and pushed him to work hard.

If you remember, In Search of Lost Time contains the longest sentence ever published. Some scholars say that this was inspired by the fear that he had towards dying: if he stopped writing, he may die and never be able to continue.

In the spring of 1922, Proust told his housekeeper/secretary Céleste Albaret (who helped him proofread and edit his writing) that he had wrote the word “end” at the end of The Prisoner, the fifth volume of In Search of Lost Time. The pair began the task of editing the manuscript to go off to publication.

On November 18, 1922, Proust and Céleste stayed up until 3:30am working on the manuscript. Proust died a few hours later.

The last 2 volumes of In Search of Lost Time were developed as Proust was writing Swann’s Way and In the Shadow of Young Girls in Flower. After his death, his brother Robert gathered all of the notes and unfinished texts that he could find and published them, completing the final 2 volumes of the masterpiece.

I hope that I have inspired you to pick up a copy of In Search of Lost Time! I definitely plan to go back to it soon and try again. Maybe I’ll have better luck if I try the English translation!

Proust sadly died at the age of 51 after battling pneumonia, that was aggravated by his asthma. He passed away in the midst of doing what he loved best: writing. His legend lives on today, and he is celebrated around the world for his craft.

If you want to learn more about famous artists and writers that lived and worked in Paris, I recommend that you join us for a walking tour! Our local guides know all there is to know about famous French personalities, and they are sure to have a few more facts about Proust to share with you!

Click here to learn more and to make a reservation!