Top 10 Facts about the Pompidou Center in Paris 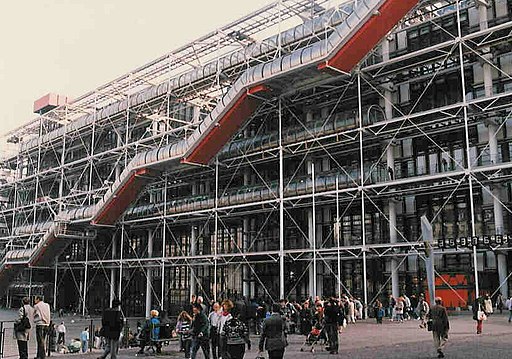 Top 10 Facts about the Pompidou Centre in Paris

The Pompidou Centre in Paris is called the Georges Pompidou National Art and Cultural Centre in full. It is a French National Cultural Centre named after France’s former president Georges Pompidou who commissioned it but unfortunately did not live to see kits completion and opening. This one time, most frequently visited cultural monument in the world boasts a distinctive style, with its industrial-looking exterior featuring brightly colored exterior pipes, ducts, and other exposed pieces.

1. The Pompidou Centre in Paris is a major tourist attraction 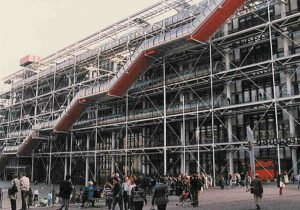 Granted, the Pompidou Centre is bound to attract visitors as it houses the museum of modern art after all. However, the numbers are astonishingly high- about 4 million people visit this museum. In the first two decades since its official opening, the Pompidou Centre welcomed more than 145 million visitors! The Centre’s novelty also attracts people who just want to appreciate the views of the building-the center has seen visitors who ride the escalators outside of the building to get a glimpse of its views.

The Pompidou Center holds many exhibitions and many visitors attend them. A record-breaking exhibition was the 2013 Dali exhibition that attracted more than 790,000 visitors. When you break it down, you will appreciate the monstrosity of it- the center had at least 7,000 visitors daily during this particular exhibition! 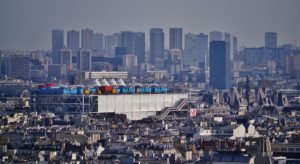 While one might only see bright colored tubes hanging outside the Pompidou Centre making for a beautiful architectural piece, they are color-coded as per functionality. The blue ducts are for climate control, green pipes for plumbing, yellow pipes for electrical wires, and the red pipes for circulation elements for health and safety.

The Pompidou Center tubes make for a colorful facade. For this, the Center has been referred to by many names, such as ‘an oil refinery’, ‘ship in a dock’, ‘Notre- Dame of the Pipes’, ‘avant-garde eyesore’ among others. 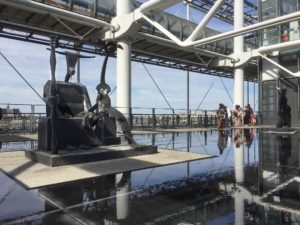 The Pompidou Centre in Paris is an unusual looking building that may depict insanity to some critics or high-end construction to others. The building is actually done in high-tech architecture, also called structural expressionism. This is a type of late modern architectural style that came up in the 1970s. It uses elements of high- tech industry and technology in building design.

4. There’s more than one Centre Pompidou 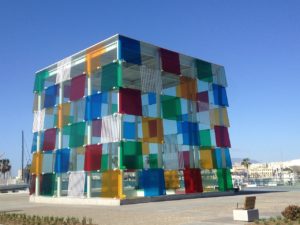 Pompidou Centre’s novelty and utmost success is demonstrated in its opening of multiple regional branches in France as well as internationally. There is a Pompidou branch in Malaga, Spain, Brussels in Belgium, Hong Kong, and Shanghai in China, Dhahran in Saudi- Arabia and pop up versions of the building in Mexico and Brazil.

Within France, there are Pompidou Centre branches in Metz, Chaumont, Libourne, Maubeuge, and Massy. The Pompidou Centre in Paris earns from the use of its brand name and use of the collection in temporary exhibitions.

5. Pompidou Centre boasts one of the largest art collections in the world 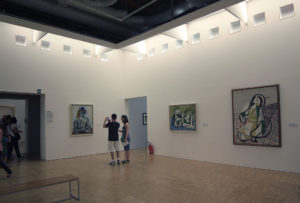 Picasso on display at the Pompidou Center- by Edal – Wikimedia Commons

Pompidou Centre in Paris holds a total of 50,000 pieces of art, which include paintings, sculptures, drawings, and photographs.

The Pompidou Centre collection is one of the largest in the World! However, most of these are in storage or rented out to regional and international branches. Less than 1,000 pieces are actually on public display in France. 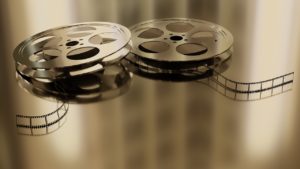 “Moonraker” the 1979 James Bond spy movie that was one of the highest-grossing James Bond movies features the Pompidou Centre. One of the rooms on the Centre’s fifth- floor was integrated into the movie- used as an office located in a space station. 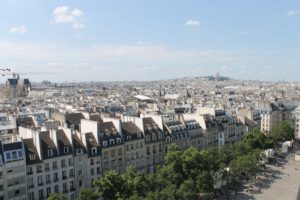 You have to brave the tubes of the Pompidou Centre to get to the rooftop for the ultimate reward that is breathtaking views of Paris- a panoramic view of Paris from the rooftop in particular beats any other.

8. Pompidou Centre hosts one of the world’s most visited museums on the world 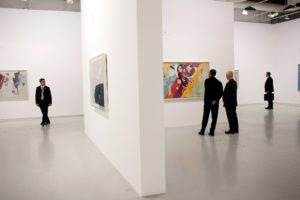 Le Musée National d’Art Moderne is one of the world’s most visited museums in the world. Its sheer size is intimidating- it sits on two whole floors of the Pompidou Centre, enough to accommodate its modern art pieces. It is also counted amongst the largest museums of modern art.

Pompidou Centre on its own also lists as one of the top 10 best museums to visit in Paris.

If you thought the Pompidou Centre was intimidating as it were, with its pipes and trappings in plain sight, there is more- there is an imposing 25-foot tall mobile sculpture right outside the Centre Pompidou. This sculpture has been named ‘Horizontal’ and has been sitting at this location since 2012. What a way to say “welcome to the Pompidou Centre!”

The Horizontal must have been ‘happy’ to break out as it had been in storage for around 20 years. Credits to this interesting finishing touch to the Pompidou Center go to Alexander Calder, an America Sculptor.

10. Pompidou Centre is an assembly of steel 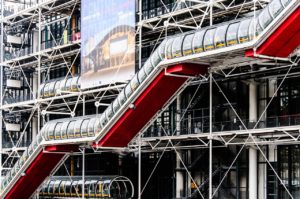 Steel and pipes of the Pompidou Center- Pixabay

With its Structural Expressionism style, it is expected that the Pompidou Center called for a lot of building material. A huge amount of steel went into its construction, compared against the glass and concrete. A whopping 15 million kilos of steel was used in its construction, while reinforced concrete was used to cover 50,000 cubic meters of it. 49,212 square feet of it is covered by glass.

Pompidou Centre is said to resemble a huge spaceship for its style, use of colour and material. Its exposed superstructure sure is one of a kind. Paris is a city with many magnificent buildings. From the famous Eiffel Tower, Arc de Triomphe, Notre Dame Cathedral among others, Pompidou Centre bears a stark difference- its style’s uniqueness and unusual look is actually a sight for sore eyes and a different type of grandeur.