Top 10 Facts about the Opera Garnier in Paris 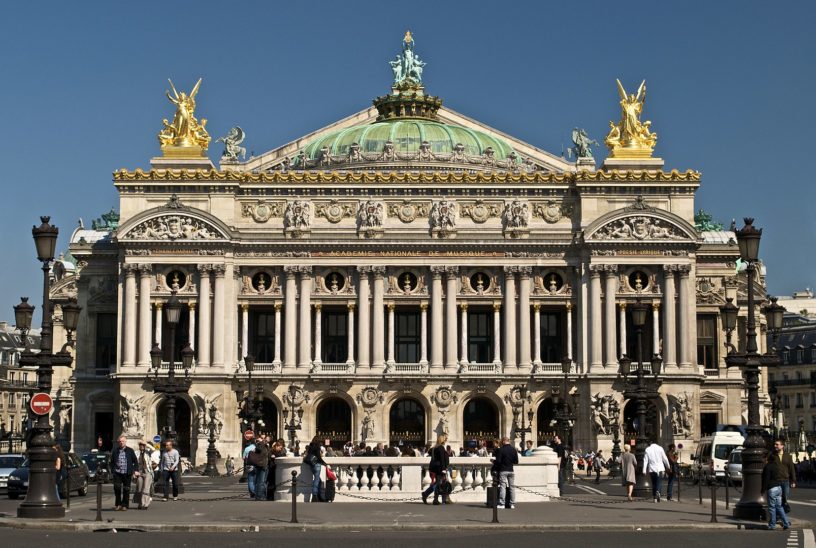 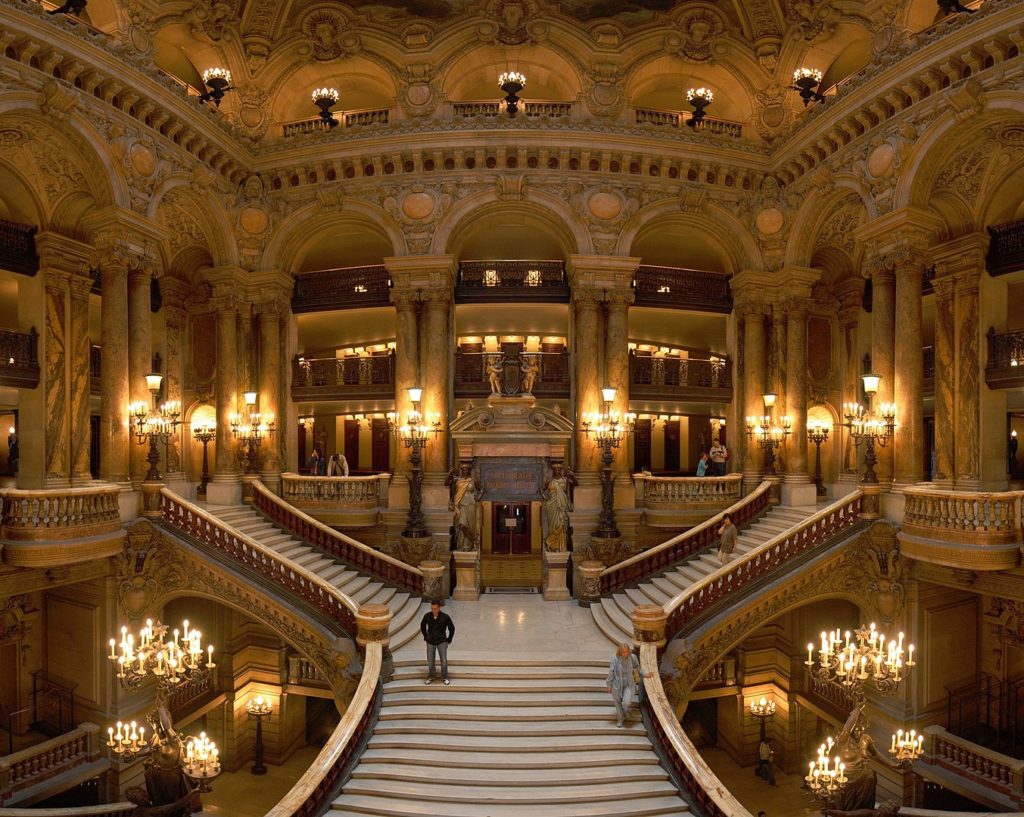 Top 10 Facts about the Opera Garnier in Paris

The Opera Garnier in Paris is an epic landmark and is said to be a typical Beaux-Arts structure. The building is characterized by its extensive exterior that has ornaments from the Neo-Baroque decorations.

This massive building has a seating capacity of 1,979 people at one go. This makes it one of the largest theatres in the world.

The theatre was home to Paris Opera Ballet before they moved to their current location at Place de la Bastille. The Opera house has been in use since the 19th century. It was constructed under the rule of the second empire in France.

A competition for the best design of the Opera house was conducted in 1860 and out of 171 architects that submitted their designs, Charles Garnier emerged the winner.

Here are 10 facts about the Opera Garnier in Paris.

1. The opera house was commissioned by Napoleon III but he never attended any concert

The construction of the Opera Garnier was inspired by a tragic event. In 1858, the emperor, Napoleon III had gone to the opera that was at Rue Le Peletier along 9th arrondissement.

Just as he was parking his coach, there was an explosion that reached his horsemen. Luckily, he escaped unharmed but eight of his men were killed and several others were wounded.

This attack was planned by an Italian revolutionary, Felice Orsini. After the failed assassination attempt on Napoleon III, his security and comport were prioritized.

The new Opera house as designed to have a private entrance and a special box where the emperor would sit.

2. The chandelier in the Opera Garnier was designed by Garnier 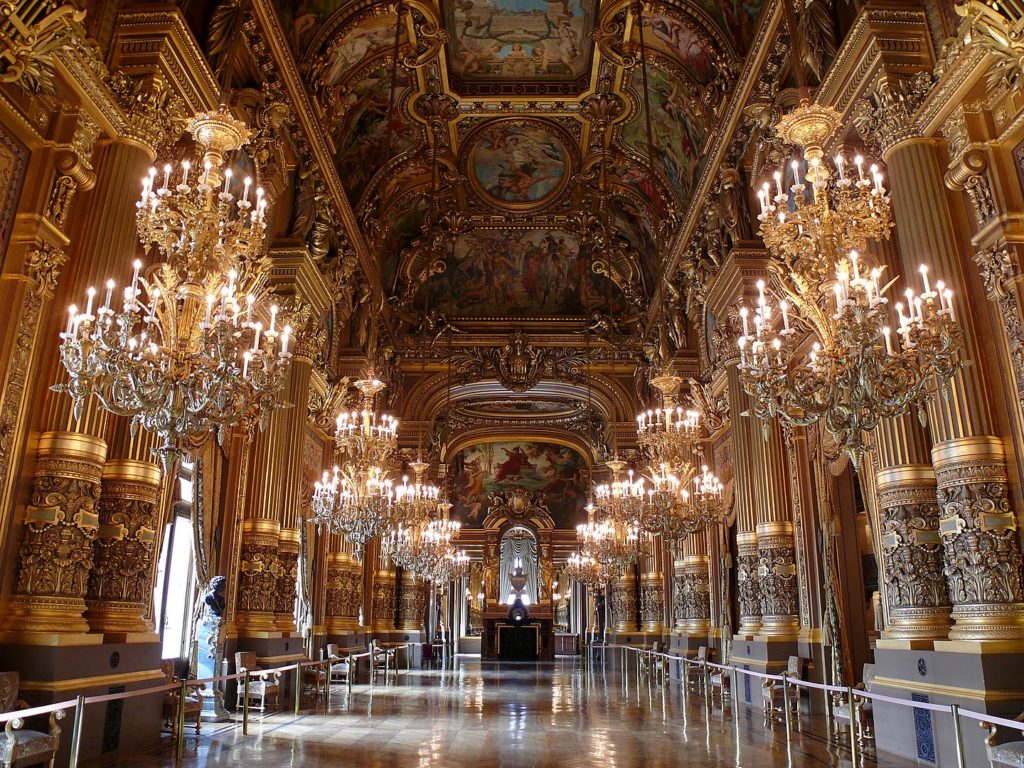 The famous chandelier which hangs from the ceiling of the Opera Garnier weighs 7 tonnes of pure bronze and crystal.

This beautiful chandelier was designed by Garnier himself.  He then handed it over to Jules Corboz to prepare it. The chandelier cost 30,000 gold francs.

When it was completed it was installed into the Opera house through the ceiling into the cupola over the auditorium for cleaning.

It was so huge that the people that sat on the fourth level complained that it blocked their view of the beautiful ceiling that had been painted by Eugene Lenepveu.

The 7-tonne chandelier, unfortunately, fell in the 1890s and killed a member of the audience.

3. The marble used in Opera Garnier are from different countries

Garnier hated iron and did not envision the staircase in the opera housing built of iron. He, therefore, covered the grand staircase area with marble to mask the metal.

The luxurious staircase used 30 different kinds of marble, from 8 different countries, made entirely with unique pieces.

He ensured that when one walked into the grand foyer, they’d be able to enjoy a beautiful view of the balconies, the chandeliers and the mirrors at the hall-of-mirrors-Esque.

An impressive 2.5 kilograms of gold was used to decorate the entire building.

The marble used on the ceremonial staircase is made up of white, red and green marbles. The marbles were imported from different countries and were the exact quality that Garnier needed in his work.

The construction of the Opera house was halted after Napoleon III was ousted and sent into exile.

The Prussian war broke out and the unfinished building was converted into camp where they stored food and straws. The fall of the Second Empire and the Paris commune stalled the construction of the Opera.

The construction of the building continued shortly after the Opera Pelletier was destroyed by fire.

The façade of the building was inaugurated in 11867 but the entire opera house was opened to the public in 1875.

It was officially opened by the Marshal of France and President of the French Third Republic among other guests.

Construction of the Opera house took 15-years to complete due to the interruptions it experienced.

5. Construction of Opera Garnier was a costly affair 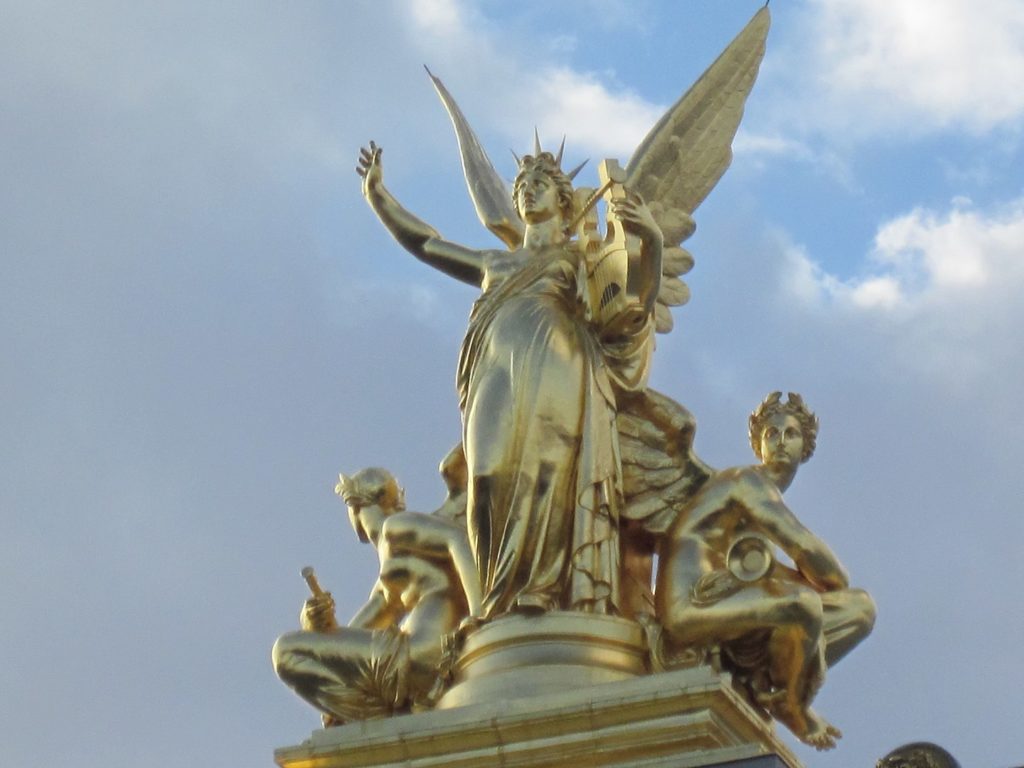 Opera Garnier was an expensive project that the empire then set to achieve. A lot of planning and designing went into visualizing Garnier’s brainchild.

The best architects, designers, sculptors were tasked to the construction of the Opera.

There were 14 painters, 73 sculptors, several mosaicists and other artists that took part in creating the beauty that the Opera Garnier is today.

Several sculptures, frescos, and mosaics can be found within this majestic opera house. It is estimated that the entire construction cost 20 million gold francs.

6. The grand staircase at Opera Garnier is more than a staircase 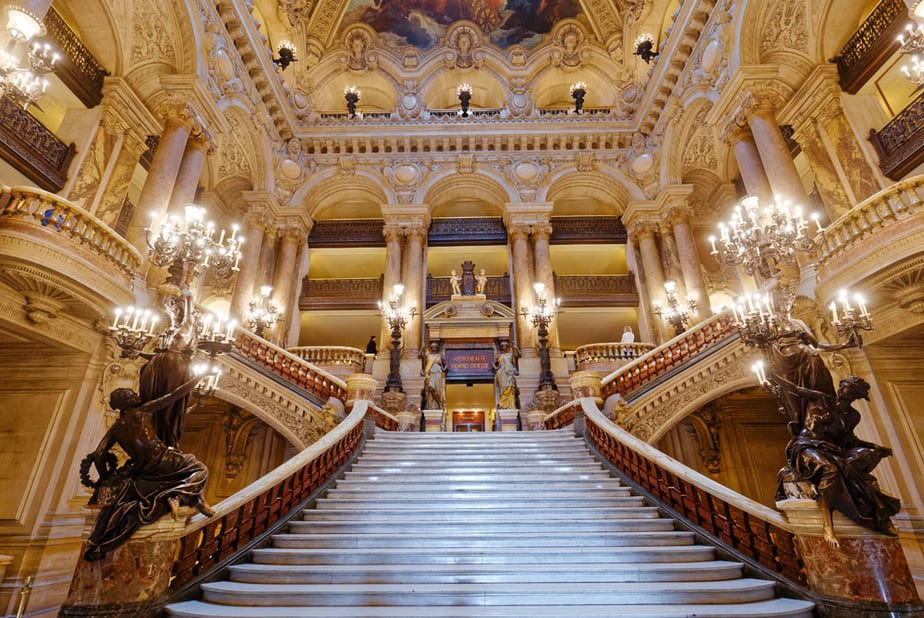 When constructing and designing the grand staircase in the opera house, Garnier designed it in such a way that it would be perfect for people watching.

The steps are shallow, when women would go upstairs, their ankles barely showed. Those that went to the opera were both of high class and middle-class people. The opera house was not just about music but also a show of class.

People wanted to be seen and see others too. The open staircases and balconies easily made this possible for those present.

7. There is a lake under Opera Garnier

The construction of Opera Garnier was constantly interrupted by the flooding of the swamp on its site. They drained the swamp for seven months but the water table beneath the opera house would occasionally fill with water.

The architects decided to build a concrete reservoir underneath the building and used it for plumbing and evacuating water infiltrations.

The lake, not a real lake though, is part of the Opera Garnier and has various tales explaining its existence.

The lake is currently being used as a controlled diving environment by the in-house firefighters of the Opera house.

8. There is an unseen resident at the Opera Garnier

The Phantom of the Opera which was written by Gaston Leroux in 1910, is said to have been inspired by a true story event. It is believed that a ballerina’s skeleton was discovered in the Grand Palais before the opera house was constructed.

Another tale is that a pianist known as Ernest was hurt in a fire and widowed in 1873. He went to the Opera house for shelter and soon started haunting the corridors with an eerie cry.

Whenever the rich went to the Opera house, they would go adorned in their most expensive jewellery. They would only wear then for the Opera and remove them once done.

This led to the establishment of banks around the Opera house. The rich would go in get their valuable jewellery and return them for safekeeping.  The banks would open until late when the Opera ended.

The banks are still there at present-day but they do not open until late as they used to.

10. The most talented artists-built Opera Garnier 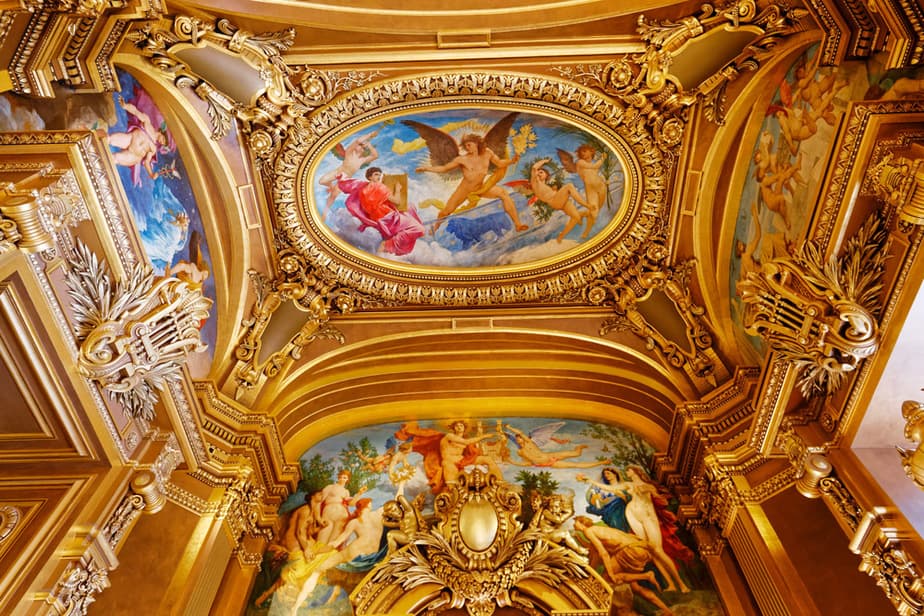 The ceiling of the octagonal salon By isogood – Wikimedia

The construction of Opera Garnier was an expensive affair and so was the team that was involved in the construction. This group of talented artists was carefully vetted and selected by Garnier.

He also selected the finest materials that were used in the construction of the Opera house.

The other two famous works in the museum that are valuable are the Dance art by Carpeaux and the fresco on the auditorium ceiling that was done by Chagall.