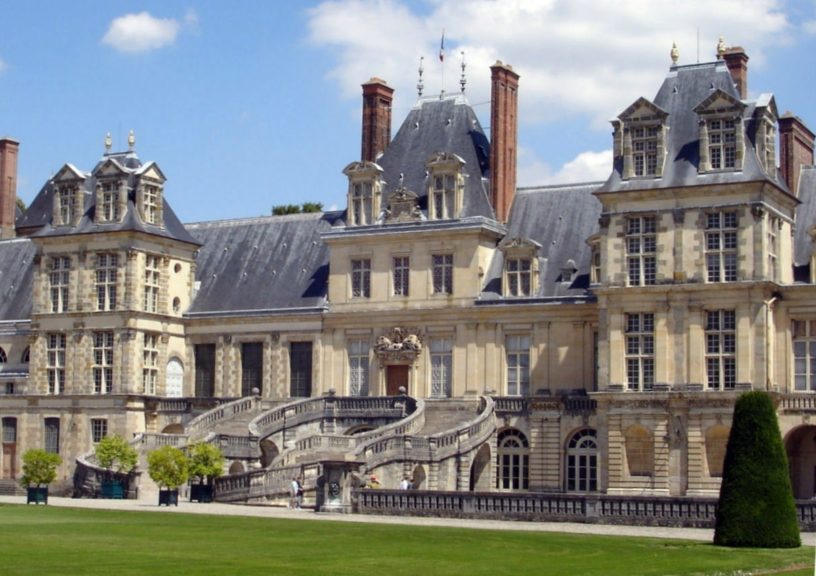 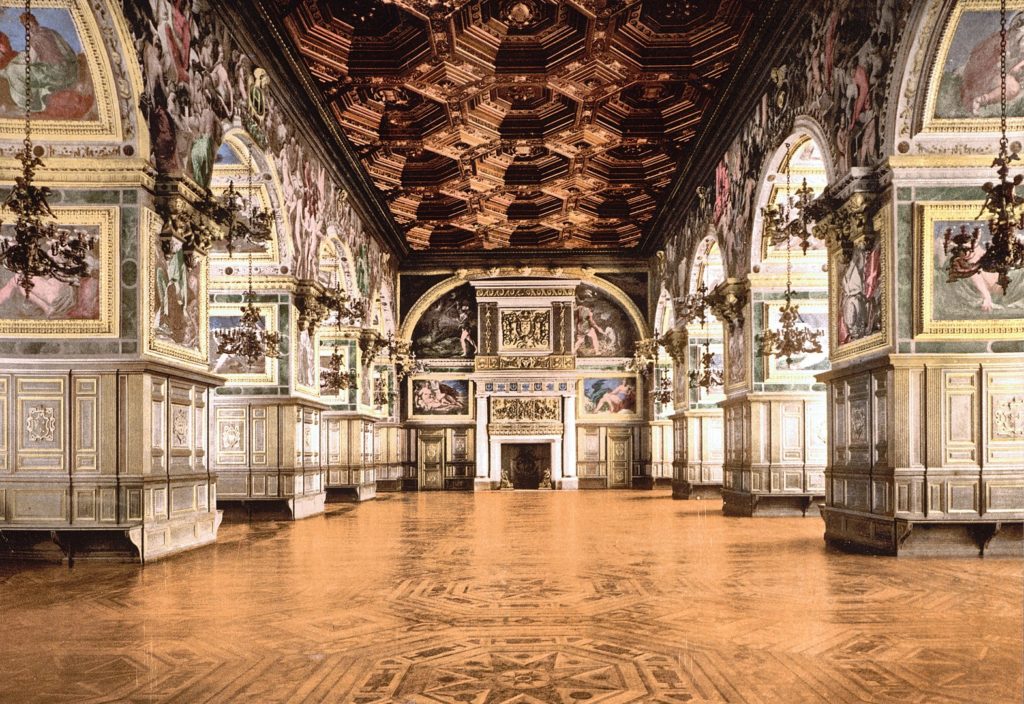 Château de Fontainebleau is located 34 miles southeast of central Paris, in the commune of Fontainebleau. It is one of the largest French royal châteaux from medieval times.

The castle served as a residence for the French monarchs. Some of the monarchs that lived in the castle include Louis VII, Napoleon III, Francis I and Napoleon I. the last two monarchs had the most influence on the palace.

This palace was named a UNESCO World Heritage site in 1981, before that it became a museum in 1927.

The palace is close to one of the most scenic forests for quiet and pleasant strolls. There are more than 1,900 rooms in the castle and you can also find an exhaustive list of all the previous tenants of the castle.

1. Chateau de Fontainebleau was a favourite of many Royal residents

Several monarchs and emperors called the palace home. Henri II lived in the castle between 1547-1559, Catherine de Médicis and Henri IV between 1589–1610. Catherine and Henri IV had their Flemish and French artists create a second school of Fontainebleau.

Napoleon Bonaparte also spent some time at the castle and did a few renovations to his liking. Another Emperor that loved the palace was Napoleon III.

2. All rooms open to the public at Chateau Fontainebleau are fully furnished 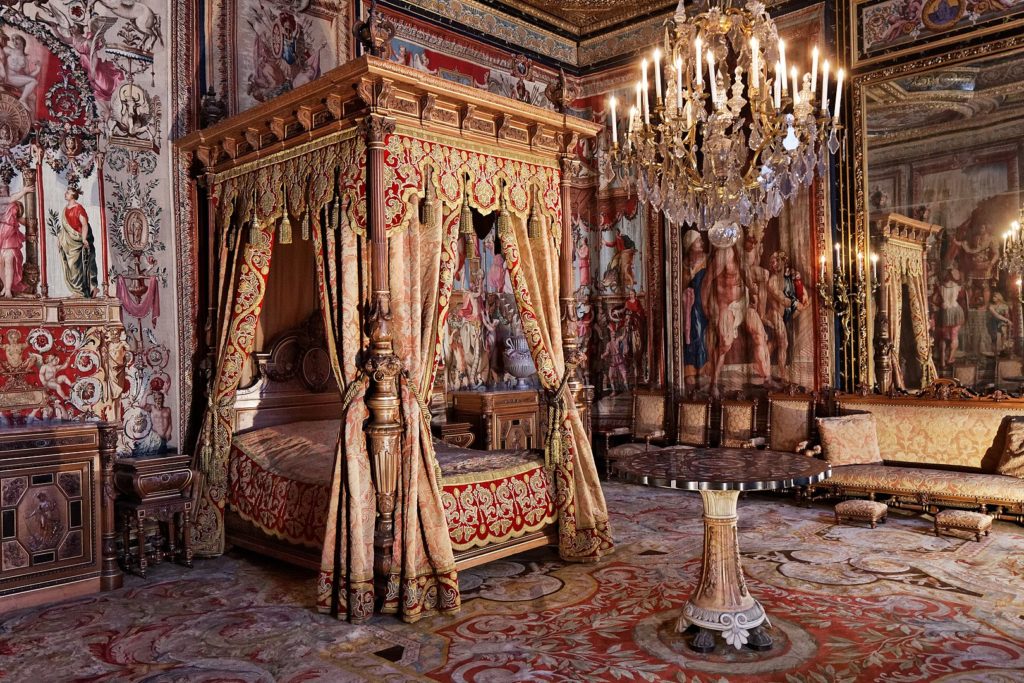 Bedroom of the Queen-Mother Anne of Austria By Thesupermat – Wikimedia

When you visit the Chateau de Fontainebleau, you will be given a tour of all the beautifully furnished rooms. Although there are at least 1900 rooms in the castle, you will only get to visit

The castle was built on 130 acres of land and surrounded by beautiful parkland and well-manicured gardens. Inside the rooms, you will get to see all the beautiful art and marvel at the architecture.

Napoleon I ensured that the palace was well furnished after he took control after the French Revolution. All the valuable items that were in the palace had previously been sold in an auction leaving it bare.

One of the furnished rooms is the Napoleon Museum showcasing items that were used by his family.

3. There are five irregular courts at Chateau Fontainebleau 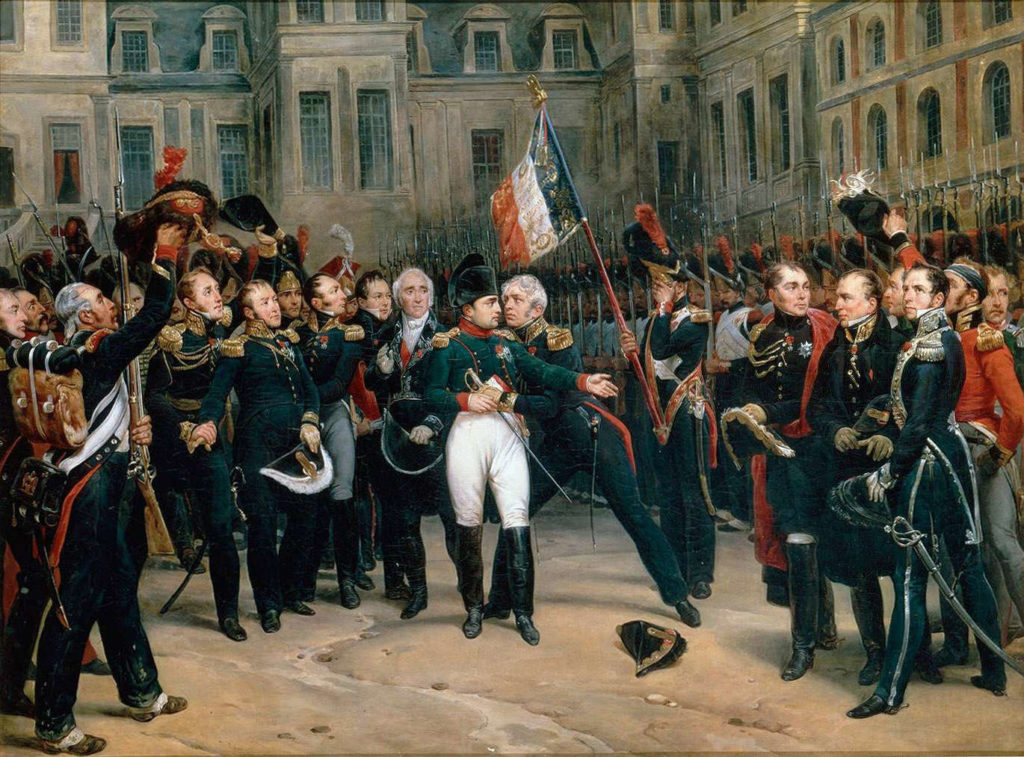 Since the palace was occupied by different monarchs and emperors, each of the occupants has their taste. Some renovated the castle, other added wings, while others ensured the gardens were well landscaped.

This led to the creation of five irregular shaped courtyards. The oldest was oval-shaped but turned to a U shape by Henri IV who preferred it that way. This courtyard has the keep which the only surviving piece of the medieval castle.

Courtyard of the White horse is the largest and as the main entrance of the castle. This is the same courtyard that Napoleon I bade farewell to his guards before he was ousted and sent to exile. 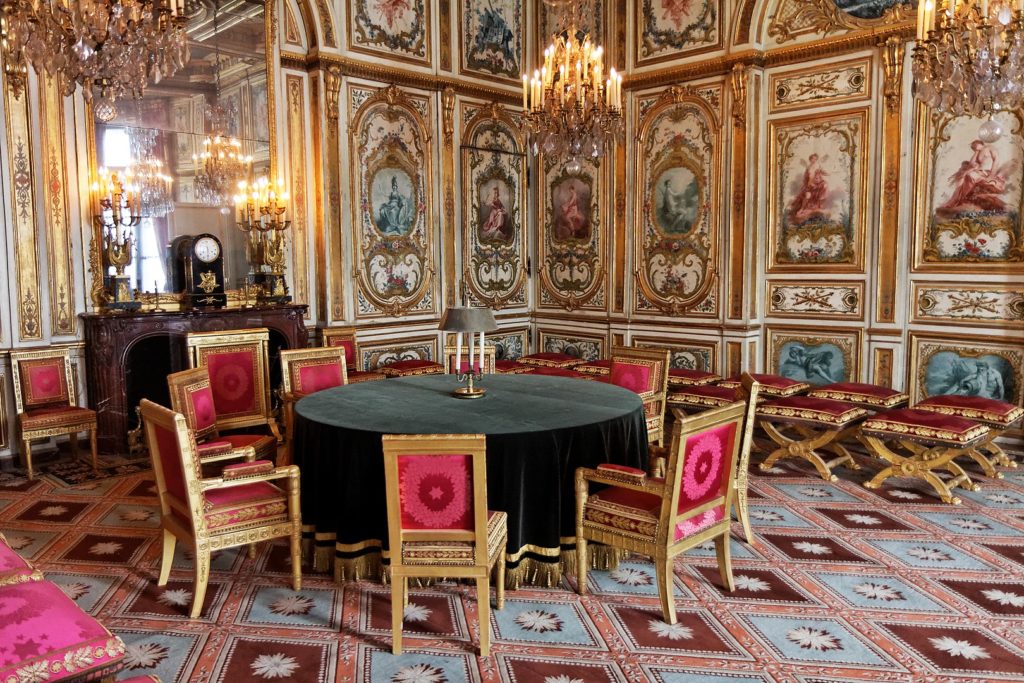 The previous occupants of Chateau de Fontainebleau had expensive tastes when it came to interior decoration.

They also occupied the palace at different times hence the richness inside. While walking into the different rooms, one cannot help but notice the mix of elegance, informality and fresh and clean styles.

The styles presented in the palace are from the 16th 17th 18th and 19th centuries. It is amazing how all these styles harmoniously complement each other.

Through the styles, one gets a glimpse of history and the personalities of the previous occupants.

The most impressive rooms in the castle are the Francois I gallery that is so beautiful. It was for the king’s private use and he never left the key but went everywhere with it.

5. Louis XV got married to Marie Leszczyńska at Chateau Fontainebleau

Another fact about this castle is that special events were celebrated in here. One of them is the beautiful wedding between Louis XV and Marie Leszczyńska in 1725 at the trinity chapel.

Another special event was the christening of Napoleon II in 1810. The Salle de Bal was also used for receptions and banquets.

The 30-metre-long ballroom is famous for its mythological frescoes, marquetry floor and Italian-inspired coffered ceiling.

6. Chateau Fontainebleau was once a German headquarter

During WWII, the Germans turned the castle into their headquarters. It was liberated by the allied forces and part of it became the headquarters of the Allied forces while the other was used by NATO from 1945 to 1965.

7. Marie Antoinette never slept on her bed at the palace 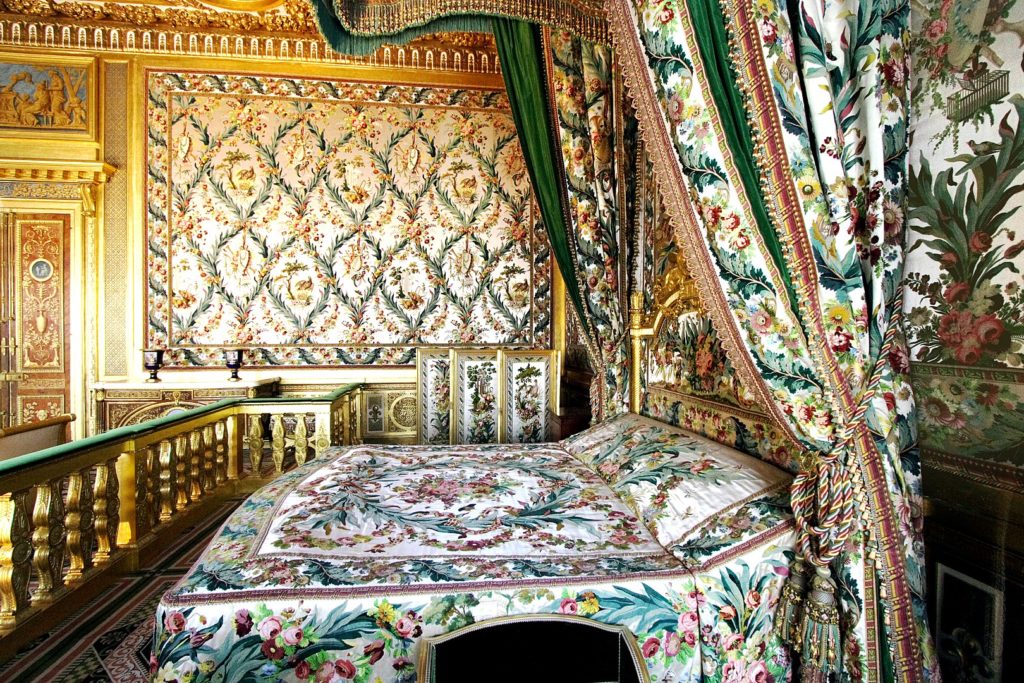 The bed of Marie Antoinette By ignis – Wikimedia

Marie Antoinette was another occupant of Chateau de Fontainebleau. The special Queen’s bed-chamber was used by all the queens that resided in the palace.

Some of the notable queens that used it were Queen Marie de Medici and empress Eugenie.

Marie Antoinette was however not lucky enough to use the bed-chamber. Before moving in, she asked that the room be redecorated to suit her taste. She was executed before her cosy and expensive bed arrived.

During a tour of the palace, one can see the room which is still intact.

8. Belongings of former monarchs are still intact at the Palace

The Chateau de Fontainebleau had different tenants over the centuries. The tenants who were emperors and queen each left something behind that identifies their taste.

There is a special room that showcases household items, jewellery and clothing that was used by the monarchs. One of the rooms is specifically dedicated to Napoleon I and his family.

Personal belongings and famous hats are on display. Another room shows the baby stuff of Napoleon’s son such as his baby crib, toys and books.

There are paintings, furnishings, a well-stocked library, clocks and cupboards.

Many important events in France and world history took place within Fontainebleau such as royal births, baptisms and marriage arrangements.

In this very palace, important treaties were signed and proclamations issued. Pope Pius VII stopped by the palace on his way to Paris to crown Napoleon as the Emperor of France.

He was arrested and imprisoned at the castle for two years.

Walking through the castle and the rooms available for public viewing, one will notice the different art pieces each telling its story. Whenever a new monarch took control of the palace, they would redecorate it.

With alterations that were made, a beautiful blend of pieces from different times merged.

Some monarchs changed the layout of the palace by building new courtyards. The couples that took great care of the palace was King Henry IV and Queen Catherine de Medici. They designed a beautiful garden with flowers following the French and Italian Renaissance style.

Louis XIV destroyed King Henry’s floating garden and, in its place, built a wing to the palace.

Napoleon who preferred an open landscape demolished everything that was built by the previous occupants.