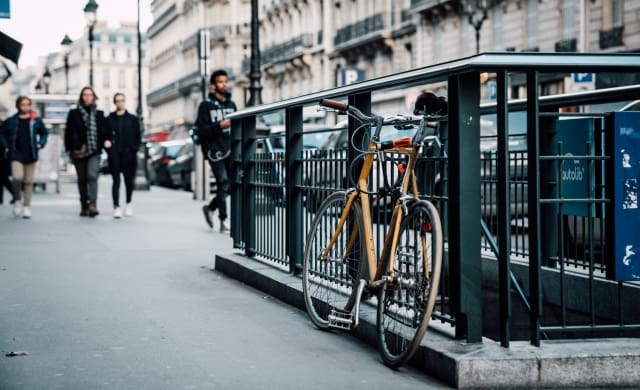 There are several different options when it comes to exploring Paris. You could walk, take the metro, take a taxi or…hop on a bike! My favorites have got to be walking and by bike.  There’s just so much more freedom!

Today, I’m going to be focusing on how to get the most out of a bike ride through the French capital. There are countless bike tour companies out there, and it can sometimes be hard to choose the right tour.

Don’t worry, that’s what I’m here for! I’ve done some research and come up with the top 10 bike tours in Paris. 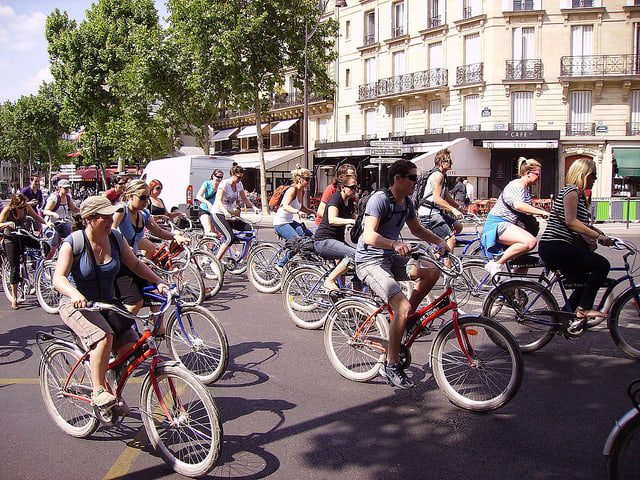 I’m always on the hunt for a unique experience in Paris. This is especially true when I get Paris veterans as visitors. They’ve done all of the usual activities, and want to do something a bit different!

In search of something a little more interesting, I stumbled across Fat Tire Tours’ Paris Tour de France bike ride. This was the perfect activity to do with my uncle, a cycling fanatic.

This bike tour takes place just once a year, on the morning of the final day of the Tour de France. If you don’t know already, the last leg of this famous French cycling race ends in Paris, under the Arc de Triomphe, to be exact.

You’ll have to wake up early for this one, as you’ll have to in order to beat the crowds. Ride along the same route as the Tour de France riders, and end your tour with a light breakfast in front of the Eiffel Tower!

Nothing like a Paris Peloton to kickstart the week 🚲 🚲 🚲 🚲 . 📸: @paris.with.elleandam

If you’re not a Paris veteran, and are more interested in learning more about the basics, I present the Parisian Day Tour by Bike About Tours!

Bike About is one of the most famous and best reviewed bike companies in Paris, so their introductory tour of the city had to make it on my list. You’ll definitely see some of the major Parisian monuments on this tour, but what this tour really focuses on is the hidden stuff.

This is why biking is so great! You have access to most of the off-the-beaten path areas of the city that you just can’t get to by car. Your guide will show you secret passageways and gardens, all while filling you in on all of the most important historical facts about Paris that you need to know.

If you want to learn more about Paris, and also want to explore some of the less touristy areas, this is the bike tour for you.

Bike tour by: Bike About Tours 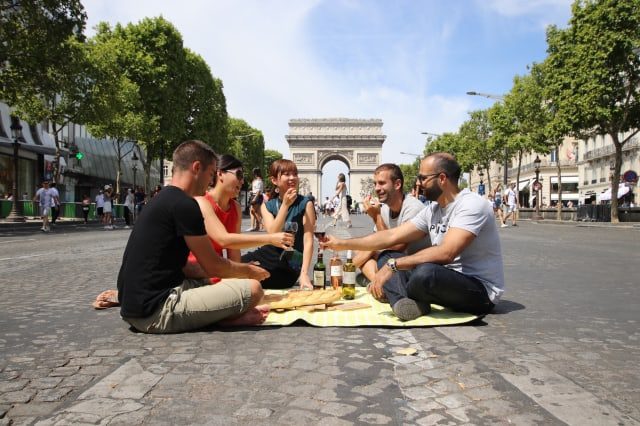 The concept behind the bike tour company First Day in Paris is simple: their expert guides want you to have the most rememberable first day in the French capital ever! First Day’s mission is to help you feel like a local in Paris.

In keeping with their name, First Day in Paris wants to spend your first day in the city with you. Think of them like the friend in the city that you never had, who is enthusiastic about showing you around and filling you in on all of the important advice you need to know to enjoy Paris to the fullest.

I love the concept behind their Bike & Wine tour. You’ll meet your guide in the afternoon after lunch, and hop on a bike. You’ll see landmarks like the Eiffel Tower and the Louvre, and you’ll also make a pit stop to play pétanque, the unofficial French pastime that is suspiciously similar to bocci ball.

And the wine? That comes at the end of your 5.5 hour long tour, where you’ll be able to enjoy a glass (or two) with some cheese on a picnic blanket – like the real Parisian you have now become!

4. Best of Paris by Bike Tour 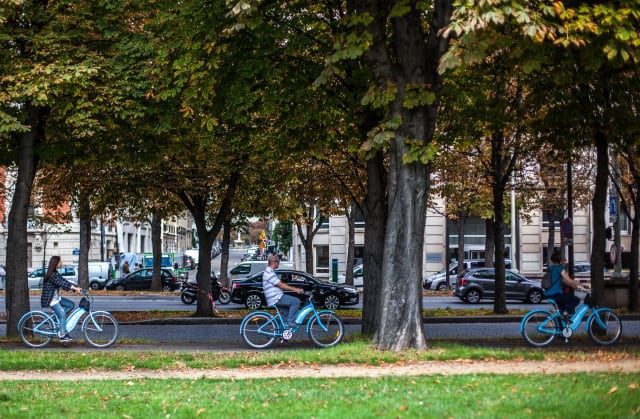 The Best of Paris by Bike Tour is for you if you want to take a cruise along the Seine River, which separates the Left Bank from the Right Bank. Most of the major Parisian landmarks are situated along the Seine (we’ll let your tour guide explain why), and so a bike ride along the banks of the river is truly an excellent way to soak in all of those must-see monuments!

Enjoy view of the Notre-Dame, Eiffel Tower, Louvre and Orsay museums and the Champs Élysées. You’ll also get plenty of attention from your guide, as this tour is limited to small groups. Plus, the guides know what you all are here for…pictures! Never fear, there are several photo op breaks involved on this tour.

Paris is known as the City of Lights, although not for the reasons you may suspect. The nickname originally stemmed from the fact that a lot of scholars and philosophers began to congregate in Paris during the Age of Enlightenment, thus making Paris an “enlightened” city. Enlightened City…City of Lights, you get the idea!

That being said, Paris is stunning by night, with all of the lights sparkling as well! That’s why this Paris by Night Bike Tour by Holland Bikes is on my list. Cruising around the city streets is even more enjoyable with the sparking lights on the evening in the background.

On this bike tour, you’ll pass by landmarks such as the Opera Garnier and Place Vendome. Your guide will awe you with valuable information about the areas and monuments you’ll see along the way! What a perfect way to work up an appetite for a yummy French dinner. 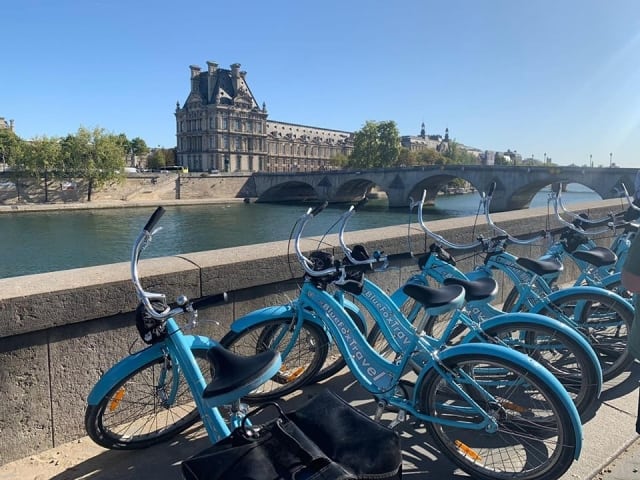 You already know that I love to explore Paris in the evening, and if you were paying attention, you also know that I love hanging out by the Seine River. So, it should come as no surprise that I recommend this Paris Night Bike Tour + Boat Cruise by Blue Fox Travel!

You also already know that most of the major Parisian landmarks are located on the Seine. With this tour, the locations you couldn’t see while on bike, you’ll get to admire on the special boat cruise portion, on the famous Bateau Mouche.

The biking portion of this tour focuses on monuments like the Eiffel Tower and the Louvre pyramid. Then, once you board the boat, you’ll get to admire the beautiful bridges of Paris from the best seat in the house. 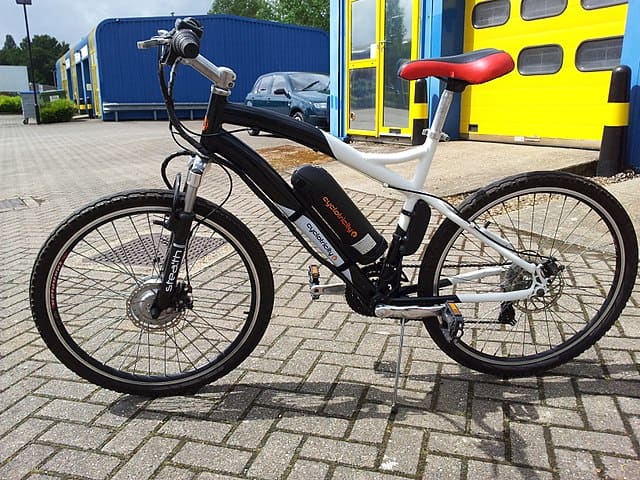 Paris Charms & Secrets Tours is one of the top rated outdoor activities on TripAdvisor with their Bike Tour. There are several things about this tour that make it unique: the famous monuments, the secret locations, the interesting anecdotes and the eclectic bikes used on the tours!

The electric bike feature is a great value add for those with mobility issues, or those who are worried that bike tours are too strenuous. Let the electric bike do the work for you as you admire Paris in all of its glory!

The guides at Paris Charms & Secrets are true experts in the lesser known facts about Paris. Pay attention, and you’re sure to impress your friends and family with interesting tales about one of the most well known cities in the world.

8. Bike and Brunch: The Best of Versailles

I needed to include at least one bike tour of the Versailles Castle on my list! Versailles isn’t technically Paris, but it is close by, and is included as a must-do activity for many visiting the French capital.

Boutique Bike Tours’ Bike and Brunch tour is a thing of dreams for history buffs and brunch enthusiasts! Meet your guide in Paris and ride the train out to the castle together, where you’ll stop to pick up your bikes before heading to the château.

You’ll likely work up an appetite after exploring the castle and gardens, so after you’ve finished exploring you’ll stop for a picnic lunch on the Royal Grounds of the Versailles Castle. If you close your eyes, you can imagine that you’re lunching on the lawn with Marie-Antoinette and King Louis XVI. 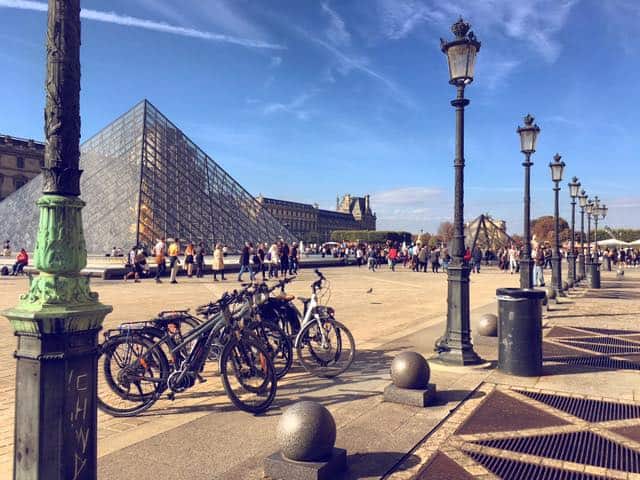 The E-Bike Tour from Paris by Martin & Friends is another bike tour that uses electric bikes! No more excuses like tired legs or achy knees, you can try out this tour! You’ll see all of the best sites of Paris in just 3.5 hours.

The guides are the best part of this tour, which is reflected through their 5-star TripAdvisor reviews. Even if you’re a little bit nervous about navigating Paris by bike, you will immediately be put at ease through their knowledge and expertise.

There are also plenty of short breaks along the way, which are filled with photo shoots, French pastries and chocolate and coffee or tea. Experience Paris the Parisian way!

10. Paris Unplugged: Cycle With the Insiders

If you’ve been to Paris before, you probably recognize Velib’, the bike sharing system in the city. You’ll feel like a real local on the Paris Unplugged tour, as the bikes you’ll use are indeed Velib’! Which makes sense, as this tour is brought to you by a company called Like a Local in Paris.

There are two different options to choose from. The first, begins at Notre-Dame, and continues along the Seine. You’ll also see the « love lock bridge, » the Louvre, views of the Eiffel Tower and some other off-the-beaten-path locales.

Option two will take you to the best viewpoint of the Eiffel Tower, an old abandoned tunnel, the oldest house in Paris and more.

No matter which option you choose, you’re sure to be impressed by all of the interesting and unique information you’re sure to learn from a local guide!

No more excuses! You now have a list for 10 bike tours to choose from the next time you’re visiting Paris. I hope you’ve enjoyed the options that I’ve laid out for you, and I also hope that I’ve saved you some valuable time. Time you can use to look for some good restaurants, or walking tours for example!

If you’d like to join one of our walking tours, click here to learn more about all of the different options and to make your booking. We have several different tours to choose from, including some free tours, and some speciality and private options as well!