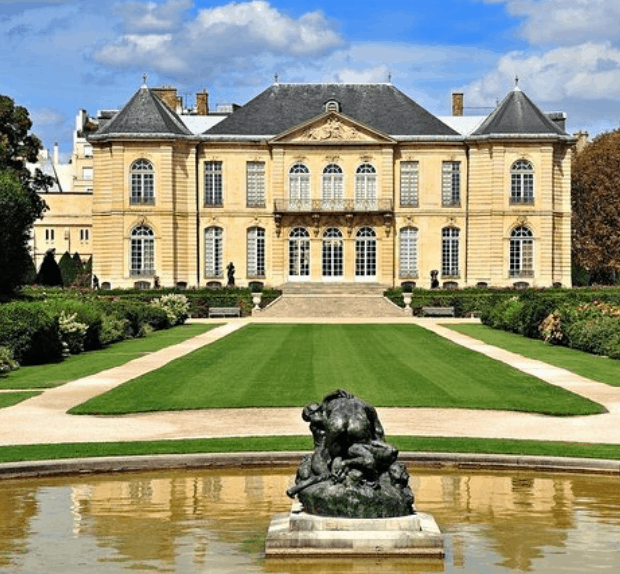 Paris is without a doubt a museum-lovers dream city. There are over 130 museums in Paris, with one dedicated to just about any subject imaginable from Impressionist art to the city sewers.

You’ve been to the Louvre, but what else does Paris have to offer in terms of museums? The answer is, quite a lot! Here’s a local’s guide to the top 10 best museums to visit in Paris. 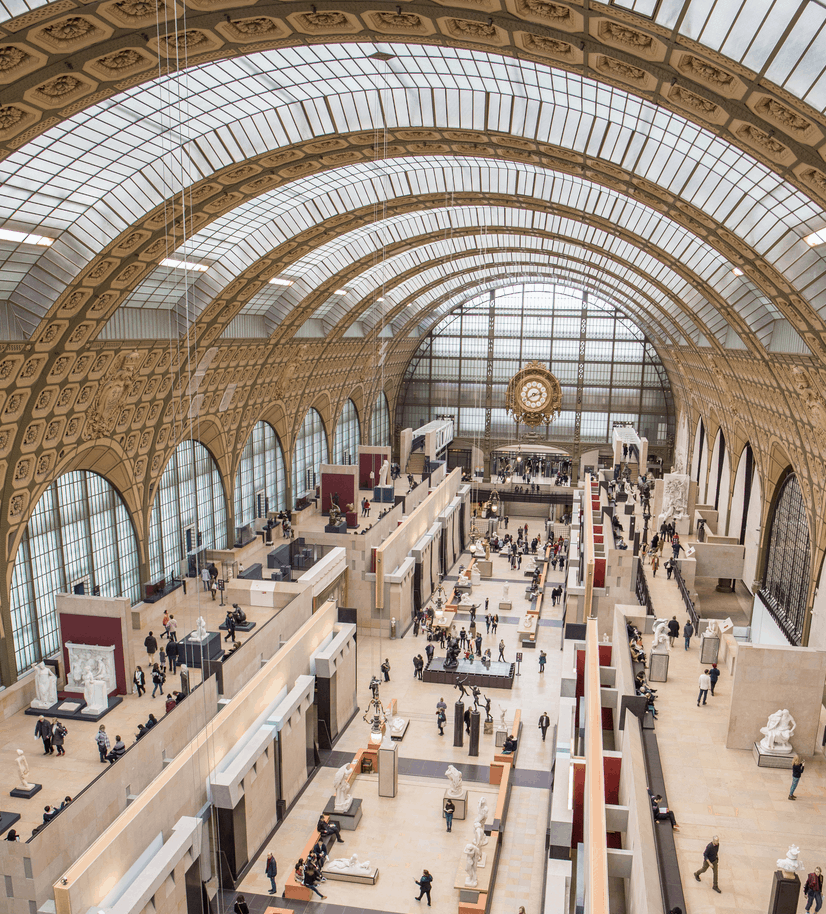 While easily one of Paris’ most famous museums, I find that the Musée d’Orsay is often overlooked. Everyone seems to be clambering to see the Louvre, when the real gem lies just across the river Seine!

The Musée d’Orsay is enormous, and  believe it or not, this gorgeous Beaux-Arts building wasn’t always a museum. Actually, the Musée d’Orsay was originally a train station built in 1900. It was one of Paris’ most important railways stations until 1986 when it was transformed into a museum.

This museum focuses on mostly French art dating from 1848-1914, and has a whopping 5 floors of it! There are 4,000 artworks on display at all times, and if you’re a fan of Impressionists, you won’t want to skip Musée d’Orsay. Here you can spot Van Gogh’s self portraits and Manet’s Dejeuner sur l’Herbe. And not to mention dozens of works by Monet, Cézane and Poussin. 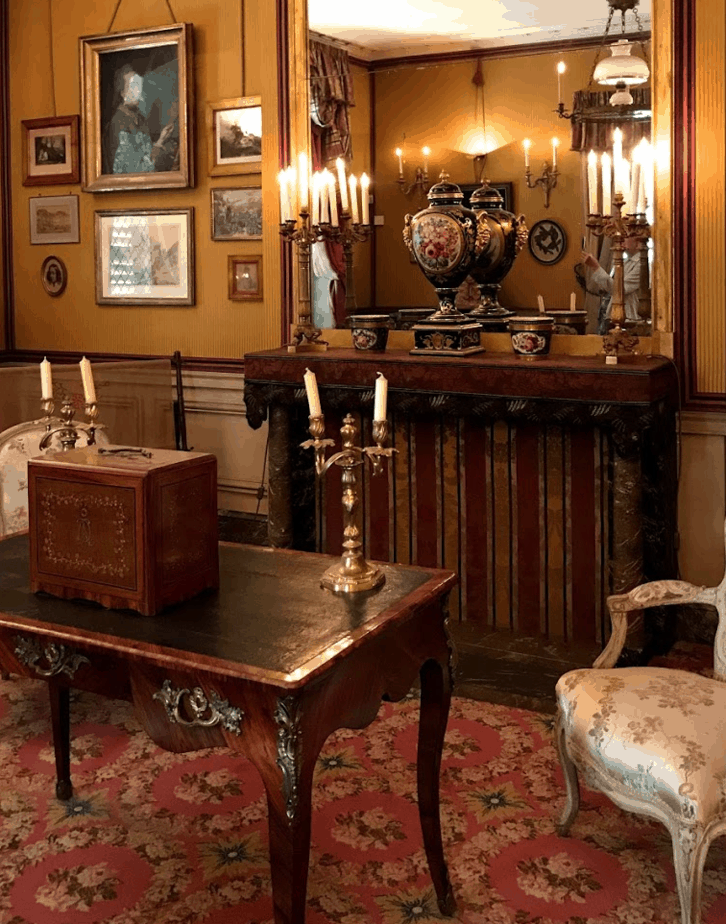 Situated in Paris’ 9th district, the Musée de la Vie Romantique is just at the foot of Montmartre. This museum is set in a charming 19th-century villa. And I’d say the place quite lives up to its name.

Focusing on fine and romantic art, the museum has a collection of sculptures, paintings and other works on display. The common theme is romance and the romantic period though many different artists are represented.

My favorite aspect of this Parisian museum is actually outside. The courtyard is framed with tall, shady trees and delightfully overgrown flowers. There’s a lovely café set in the garden space; the perfect spot for a date! 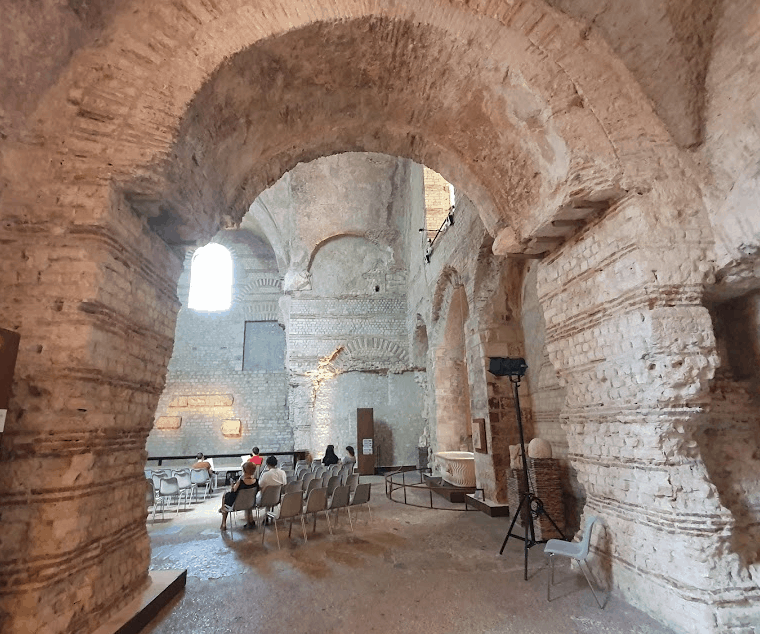 Now the Musée de Cluny is one of the most surprising museums you can visit in Paris. Located in the heart of the Latin Quarter, this museum is dedicated to art and history from the Middle Ages. So if you want to see ancient tapestries, sculptures and artifacts dating back to Medieval times, this is the place!

Actually, the museum itself resembles a castle, which is impressive in the middle of Paris. And the building is actually situated on ancient Gallo-Roman baths dating back six thousand years!

The baths were a major part of ancient Lutetia (the old Roman name for Paris) and were situated on what is now the Boulevard Saint-Germain and Boulevard Saint-Michel. You can visit the old thermal baths either on a guided tour or on your own. Either way it’s pretty crazy to imagine bathing in what are now some of the city’s busiest streets! 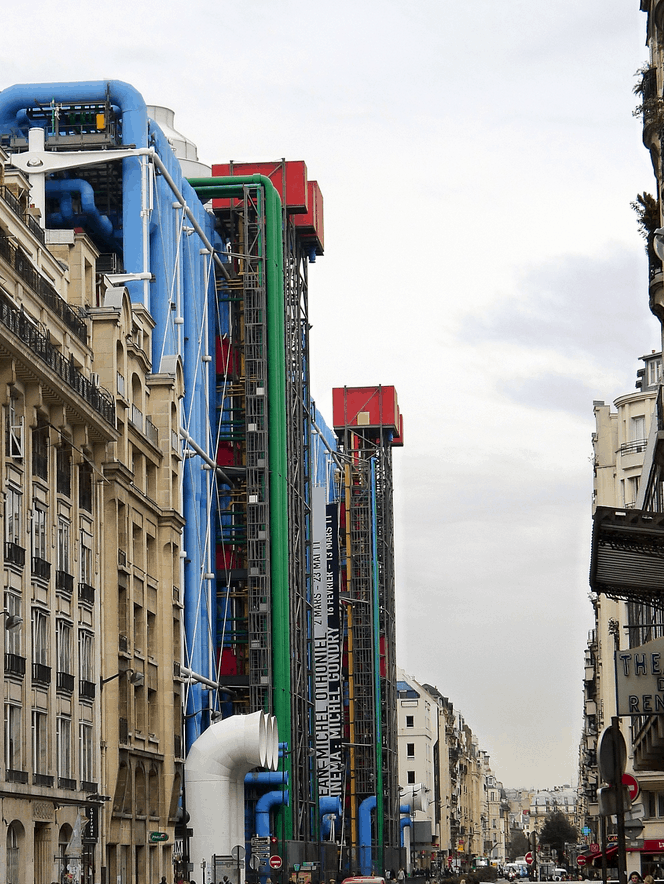 Well, if you’ve spent any time in the Marais, you’ve probably seen the Centre Pompidou. Thanks to the colorful pipes and air vents, this modern art museum is hard to miss. And actually, it’s one of Paris’ more iconic monuments.

The Centre Pompidou, or Beaubourg for Parisians, actually boasts the largest collection of modern art in Europe! The complex is multi functional, so it’s not just a museum. The space includes floors of modern art, a library, a bookshop, café, a cinema, and even a rooftop restaurant (with a gorgeous view of Paris, I might add). In terms of art, you can see some of Andy Warhol’s more famous works here, as well as a solid collection of Roy Lichtenstein pieces. 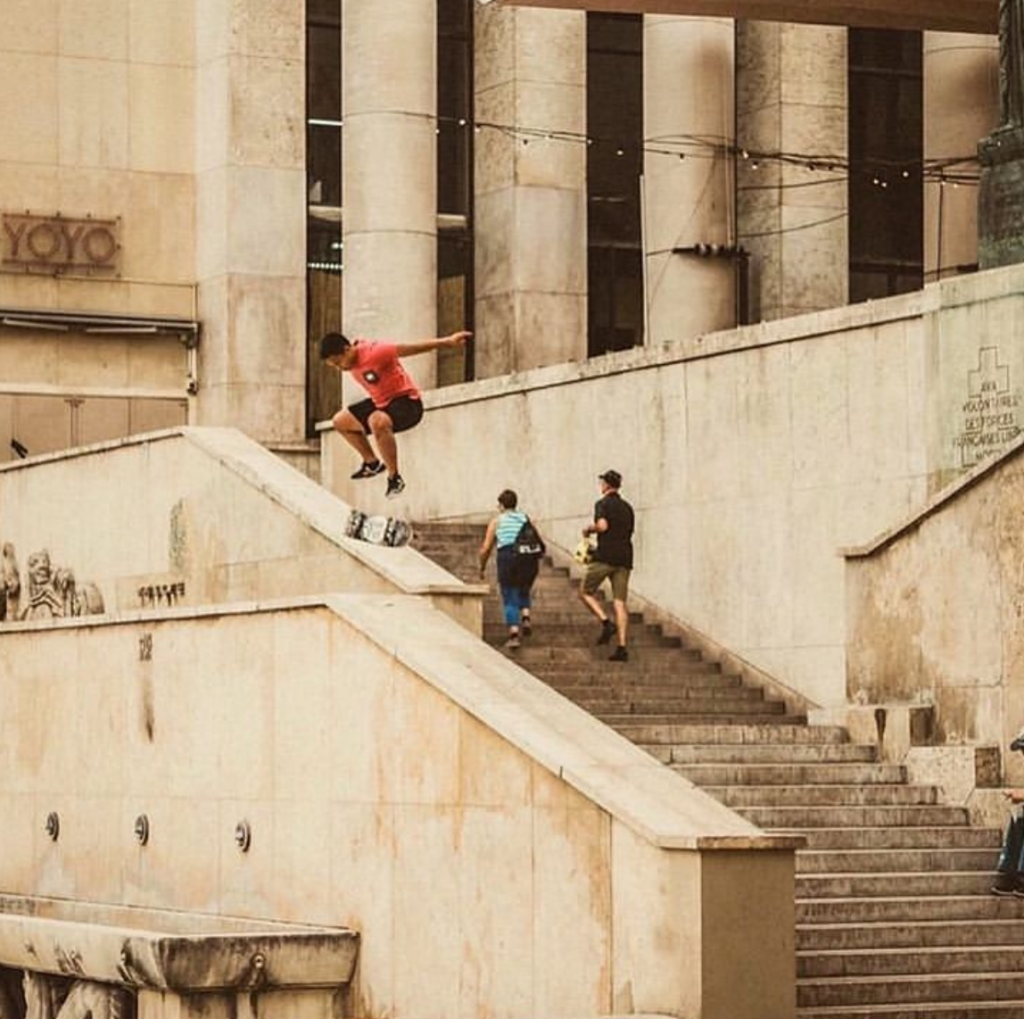 If you’re into contemporary art, you’ll want to make sure and squeeze in a visit to the Palais de Tokyo. Overlooking the Eiffel Tower in Paris’ 16th arrondissement, the Palais de Tokyo is a unique exhibition space. And not to mention, a haven for modern artists. The Palais is meant to be provoking, a self-described anti-museum in a classical Parisian palace. Now there’s something a little different.

And if you’re hoping for an out of the box museum to visit in Paris, look no further. Palais de Tokyo features contemporary artists from all over the world; and exhibitions are in just about any medium imaginable. Some artists us the space to showcase their works in an interactive way, and some are given a carte blanche to take over entirely and transform the Palais! Basically, no two visits are the same here.

If you’re in the 7th arrondissement, the Musée Rodin is an absolute must see. The gorgeous interiors have provoked plenty of drool-worthy Instagram photos, but this place more than lives up to the hype. The Rodin museum is located in the artist’s former home and studio, which is worth seeing on its own.

Auguste Rodin was one of the most famous sculptors in French history. His works are incredibly detailed, and even life like! At the Musée Rodin, you can see famous pieces like ‘The Thinker’ and ‘Gates of Hell’, both are beautifully displayed in the garden. And if you head inside, you can catch a glimpse of some lesser-known works by Rodin, as well as some paintings by Renoir, Monet, and even van Gogh hanging on the walls. 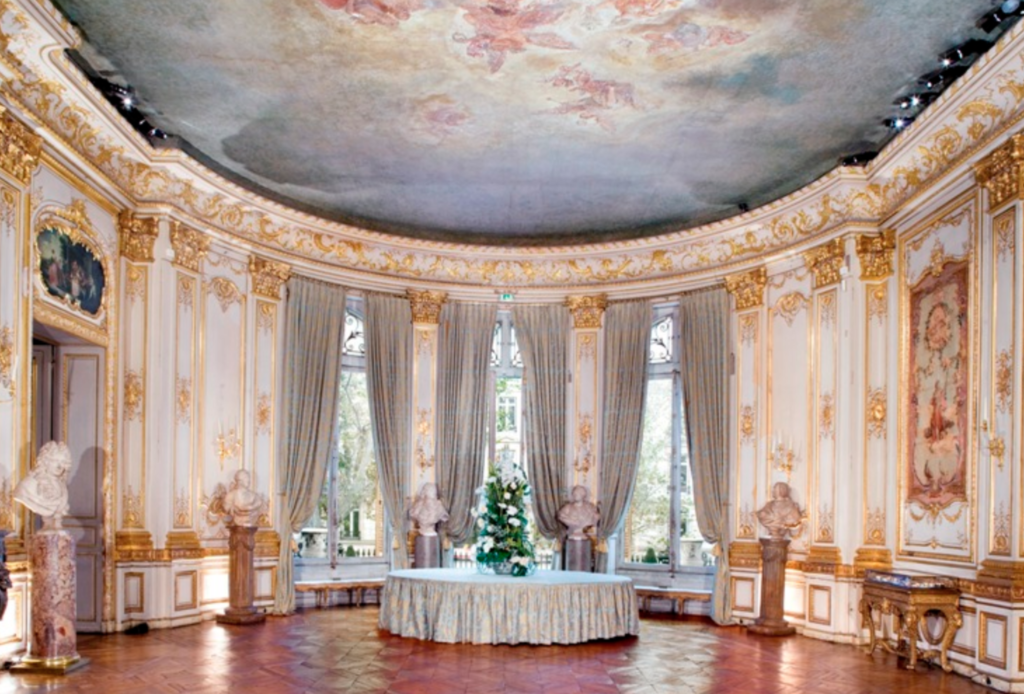 Easily one of the most luxurious museums on my list, the Musée Jaccqemart André is located in the posh 8th arrondissement. Housed in a former mansion, the museum was originally created by a wealthy Parisian couple to show off their personal art collection.

The mansion is like a museum in and of itself, with every last detail adding to the luxury and glamour. Gilded furniture, impressive painted ceilings and velvet accents; it has a very Versailles feeling. The Andrés’ love of 18th century statues and decorative art is evident throughout the museum, and it’s no small collection. You can easily spend a couple hours here going back in time. 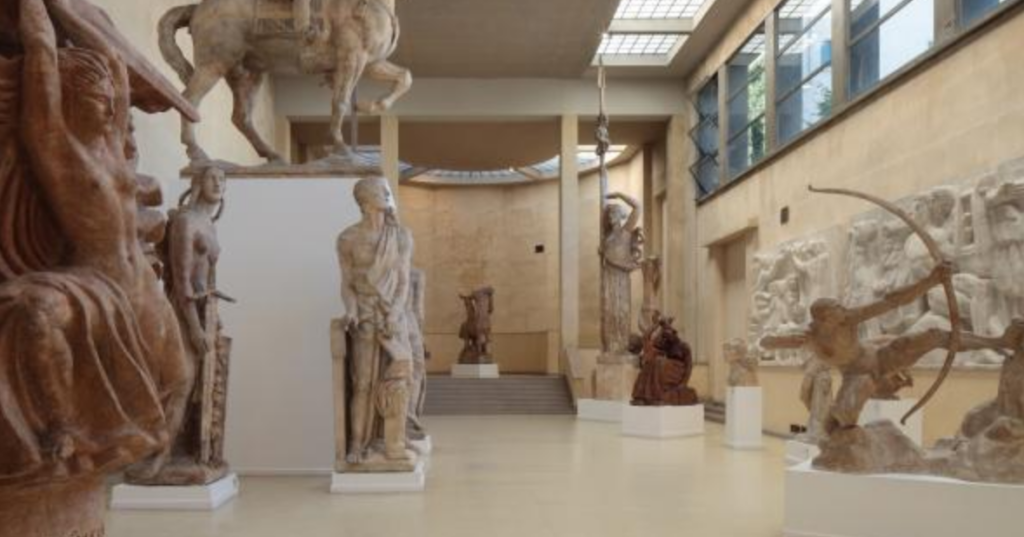 Tucked away on a quite street behind Montparnasse in the 15th arrondissement, the Musée Bourdelle is a true hidden gem. The museum features impressive sculptures by Antoine Bourdelle; once a student of Rodin. This museum is especially intimate, as Bourdelle’s works are showcased throughout his former studio and grounds.

They’ve been beautifully transformed into a traditional grand gallery space as well as a lush sculpture garden where the works are displayed. And you can still see the studio where he worked, it’s been completely preserved! The sheer beauty and carefully-curated collection make Musée Bourdelle one of the best museums to visit in Paris. 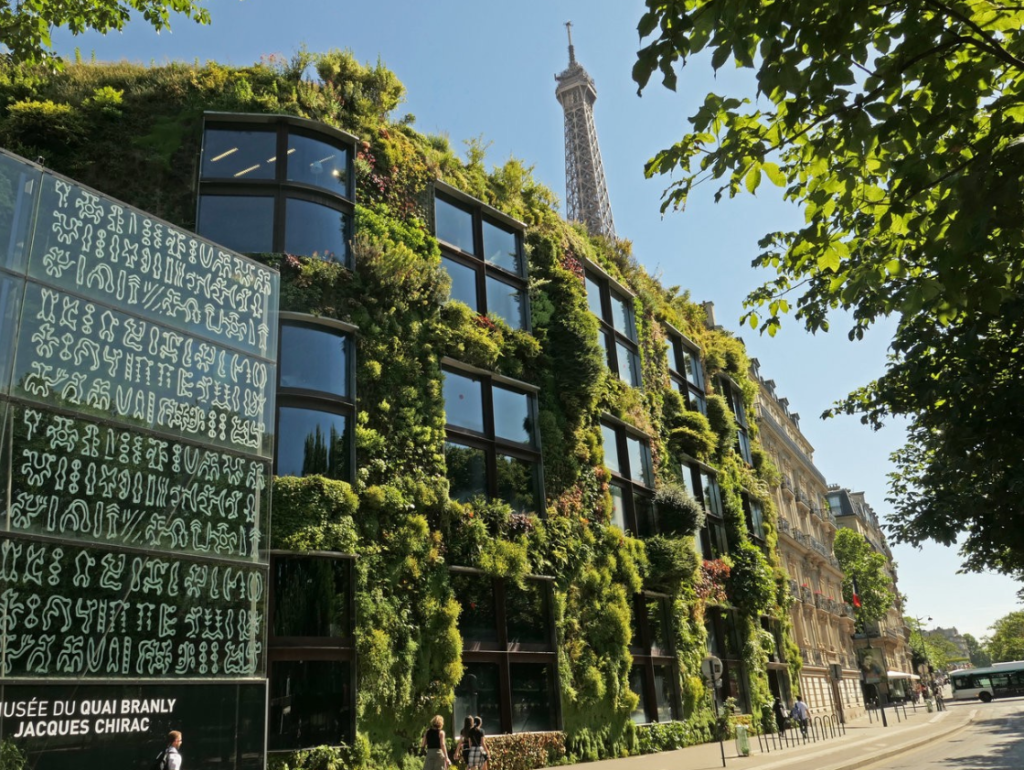 If you’re looking for an off the beaten path museum in Paris, head to Musée du Quai Branly. This museum is dedicated to non-European artworks, and often features indigenous works from Oceania, Africa, Asia, and the Americas. There’s a bit of everything showcased here from masks to paintings, jewelry and sculptures.

You’ll find the Musée du Quai Branly set in the heart of Paris’ 7th arrondissement. The museum is just a couple minutes from the Eiffel Tower, and the entrance is hard to miss. The glass pane building on Quai Branly is covered with live plants, providing a cool, natural light. 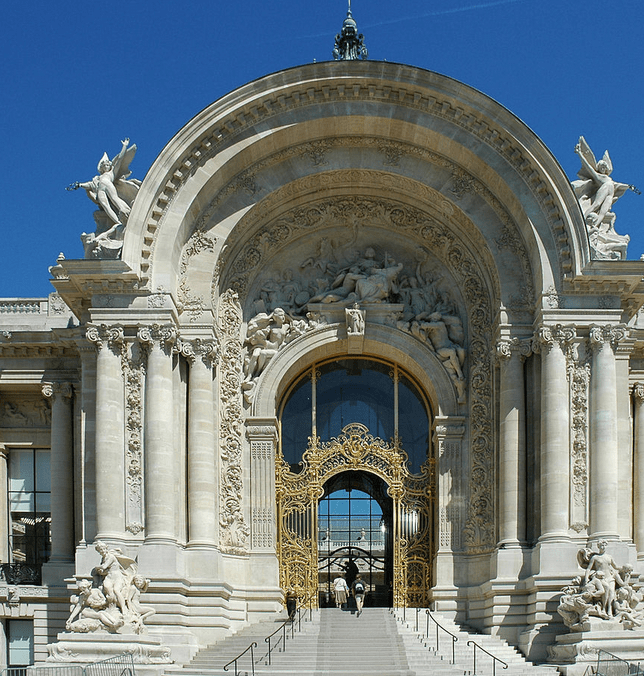 Located on Paris’ right bank just a stone’s throw from the Champs-Elysées is the Petit Palais. This is one museum just as impressive on the exterior as on the inside. Like the Grand Palais just across the street, the Petit Palais was built for the World’s Fair in 1900 and has been a local favorite ever since.

Stunning Belle Epoque façades frame a golden grand staircase at the entrance, and the interior showcases fine art and sculptures, as well as some Impressionist works by the likes of Poussin and Manet. They have a lovely terrace café as well, should you fancy a drink after your visit.