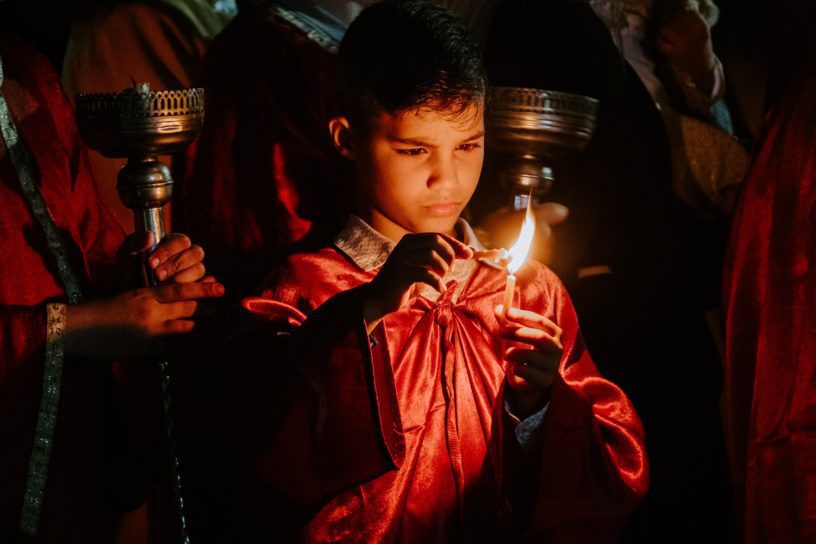 If you’re not a Parisian local, finding where to go on Christmas Eve for a mass service might be a bit of a scavenger hunt.

What you really need to know is that just about every single church in Paris, big or small, will always offer some sort of Christmas Eve service for the public to attend. Of course, being in Paris over the festive season often drives people to want to experience only the biggest and the best services — and so here are the ones you need to know about.

1. Mass at the Sacré Coeur in Paris

This is a big one, and you can count on every Christmas Eve ceremony at the iconic Sacre Coeur to bring in the crowds in their droves.

This is the church at the top of the hill in Montmartre. After the Notre Dame, it is one of the most frequented churches in the city, brining in millions of visitors from around the world each year.

On Christmas Eve the first ceremony starts at 6pm sharp; this is open to all, and is always a service centered around carols and the Christmas story. The second Christmas Eve service will begin at 10pm followed by a traditional midnight mass at 12am.

Attendees are encouraged to arrive with ample time to get into the church and find sufficient seating. 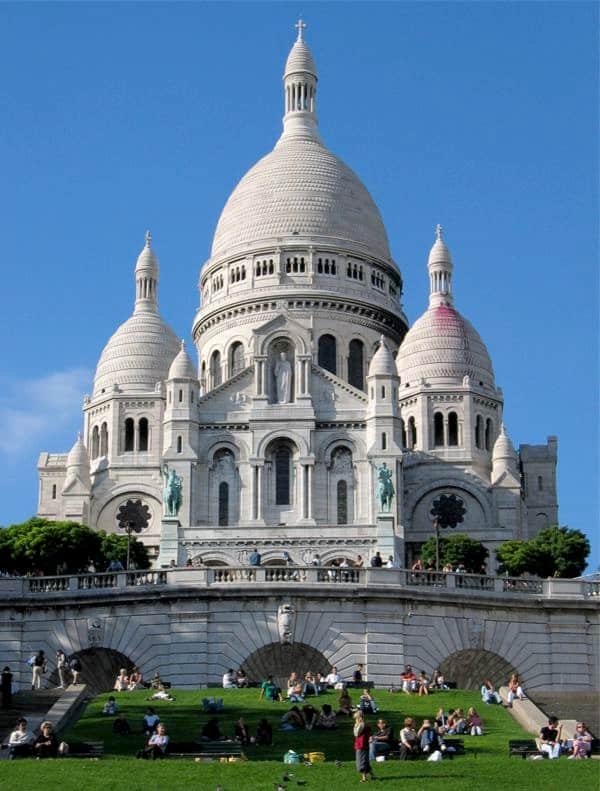 2. Mass at the Église Saint Eustache in Paris

For a Christmas Eve service right in the center if Paris one should head to the Church Saint-Eustache. Personally I find this to be one of the most beautiful churches in the city, but then again I am always partial to Gothic architecture.

The services here begin at 7pm, but this one is strictly dedicated to the youth audiences. Children are dropped off by their parents and will share in the festivities of a nativity scene that is used to tell the Christmas story, start to finish.

Adults are invited to join the space from 7:30pm onward. This will become a formal mass featuring many Christmas songs and hymns.

At the Church Saint-Eustache, midnight mass begins at 10pm and continues through until after 12am.

Again, this is an incredibly popular service due to its central location in the heart of the city. Come early! 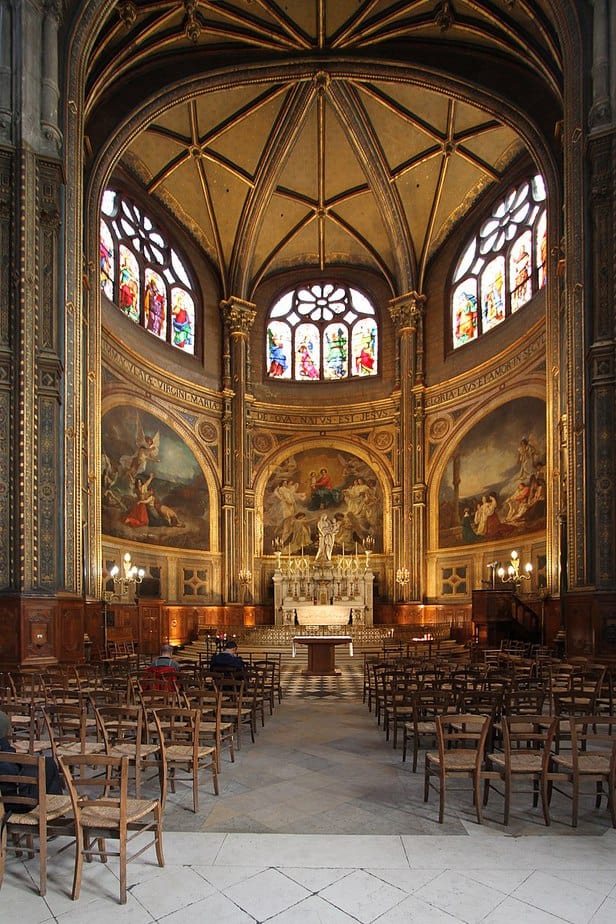 3. Mass at the Église Saint Sulpice in Paris

Fancy a Christmas Eve mass in the church featured in The Da Vinci Code? Église Saint Sulpice is on the Left Bank and is the second biggest church in Paris.

It’s a truly compelling space; one where any ceremony feels ten times more profound purely because of the ambient environment.

At 7pm they begin the children’s Christmas Eve service. From 11pm they start their midnight mass service, that usually goes on until 1am in the morning of Christmas Day.

Both the kids and adult services are beautifully curated. 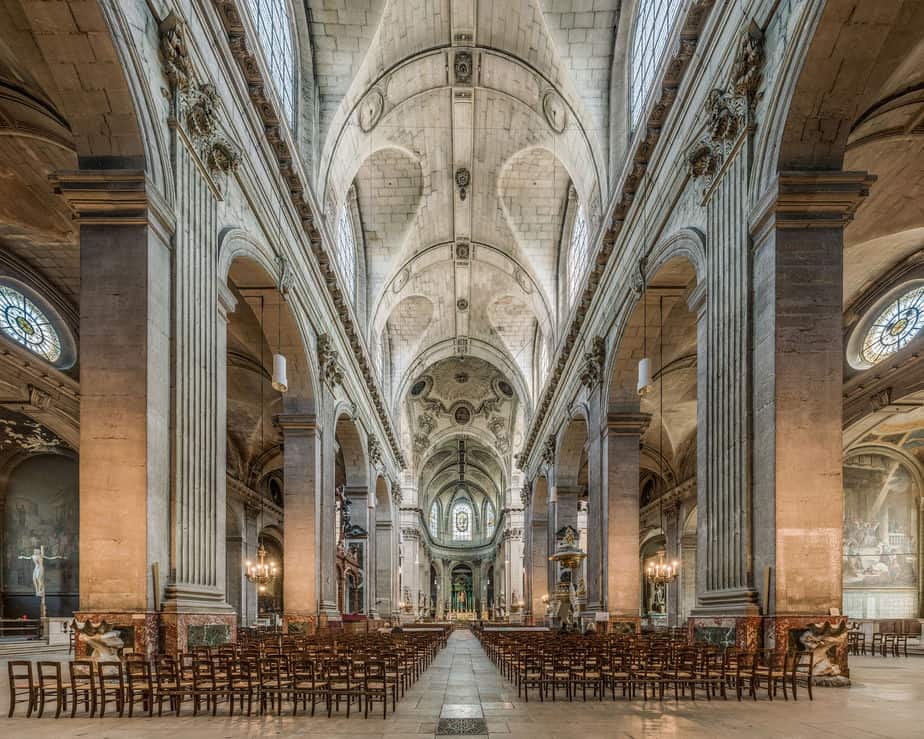 Christmas Eve at the Notre Dame is a notoriously jam packed event. From morning until night there are services here, ranging from screenings, talks, masses and nativity scenes.

Of course, with the recent fires, the fate of this years Christmas festivities remains to be seen, and we will have to keep an eye out closer to the time as to whether or not they will be able to take place.

The 20 meter tall Christmas tree in the entrance of the church is a major yearly attraction. If restoration works in favor of Christmas this year, then this is a fantastic spot to head to for your services. 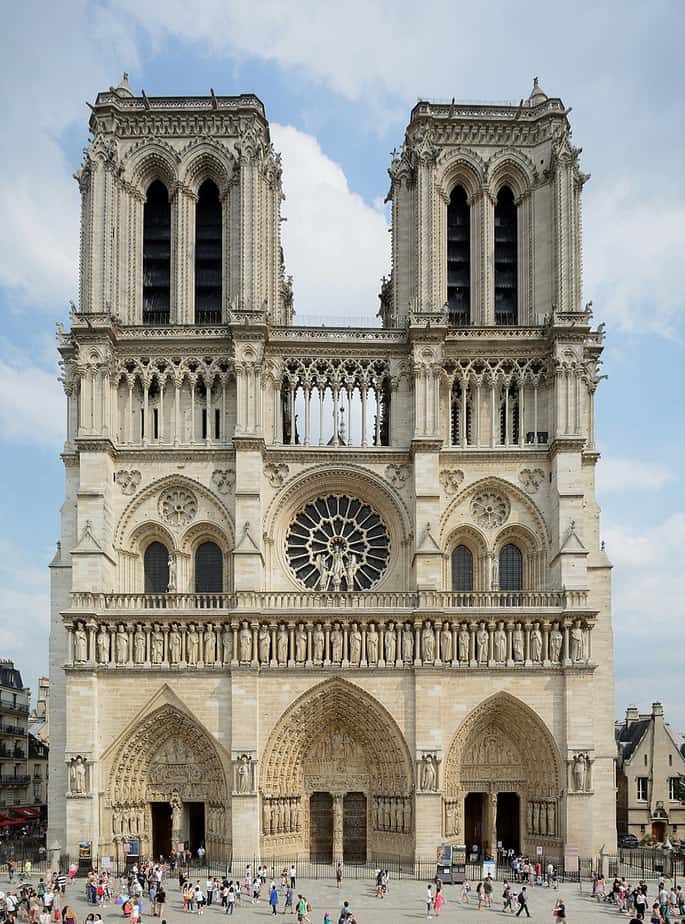 St George’s is the beautiful church close to the Arc de Triomphe. It’s much smaller than say the Notre Dame or St Sulpice, offering a far more intimate and family oriented affair.

Most of the Christmas Eve services at St George’s will be held in French, but their midnight mass, beginning at 10:30pm, is always hosted in English. The service is followed by champagne and a warm welcome into the early hours of Christmas Day.

If the chaos of the Église Saint Eustache in the 1st arrondissement feels like a bit much for you, consider the tiny St Michael’s Church not far away instead.

This Anglican Church hosts their Christmas Eve mass in English, and the service starts promptly at 11pm each year. Attendees are always encouraged to return the following morning at 10:30am, for a continuation of the mass in Christmas Day celebration.

Protestant worshipers tend to flock to the Temple de Pentemont on the Left Bank for a beautiful array of intimate services on Christmas Eve. The church is particularly close to the Eiffel Tower, making for a charming collision of location and celebration.

Their service times are updated yearly and will be available via the church website closer to Christmas Eve. 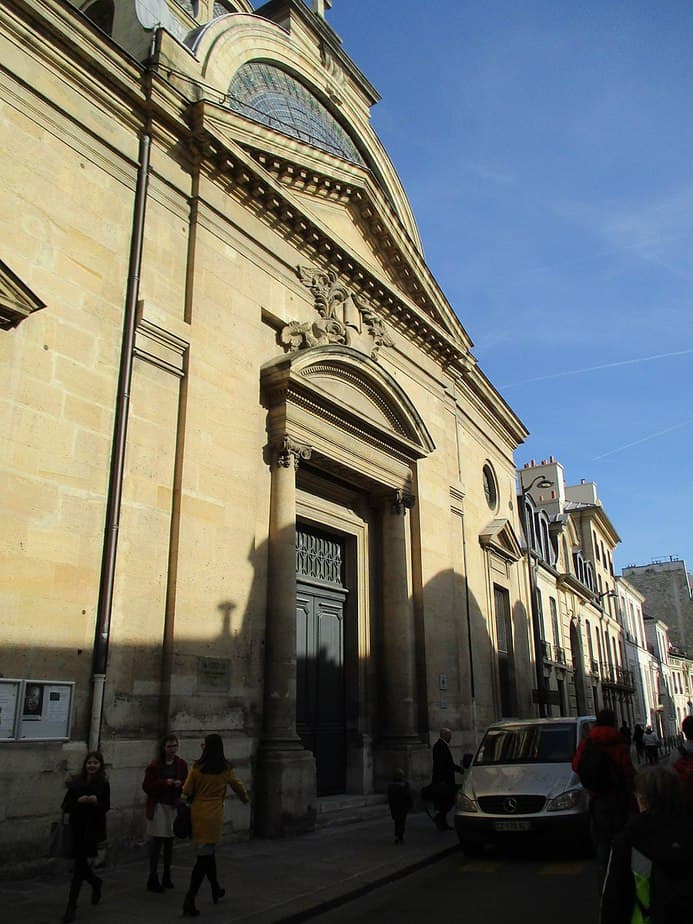 St Joseph’s is an important one. This is the only English-speaking Roman Catholic church in all of Paris, so Christmas Eve services here are highly popular.

Again, their service times are only released closer to the actual day. Keep an eye on their website or social media so you can plan your attendance accordingly. 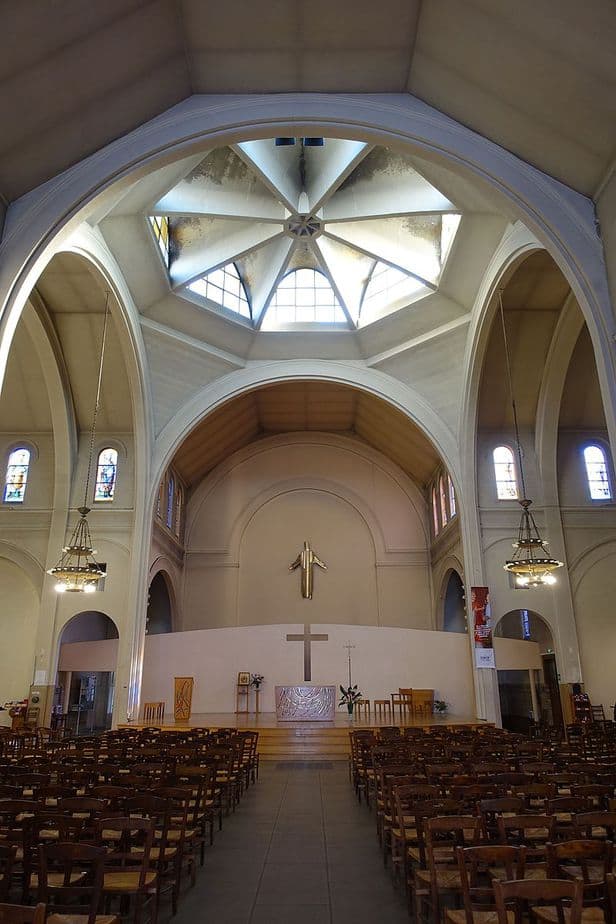 This beautiful family church on the Left Bank centers all of their Christmas Eve services around child-friendly content. They are known for having one of the most impressive nativity scenes on display for the duration of their masses; kids are also welcome to engage with the displays before and after service.

Their service times will be release closer to Christmas; keep an eye on their website for more information. 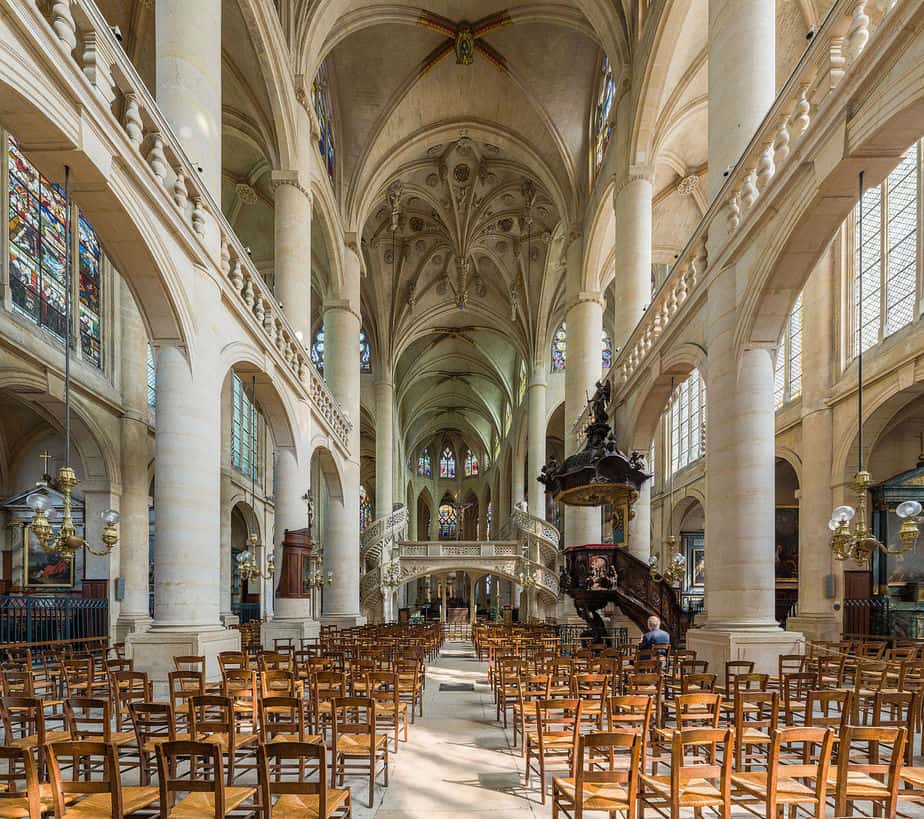 The Madeleine Church is the house of worship built into the Greek-temple looking building in the 1st arrondissement. Travelers often get this church and the Pantheon building confused, since they look so incredibly alike.

The only service at the Madeleine Church on Christmas Eve is a vigil and mass that starts at 10pm. Doors open at 9:39pm and you’re encouraged to arrive early as this is another popular one in Paris. 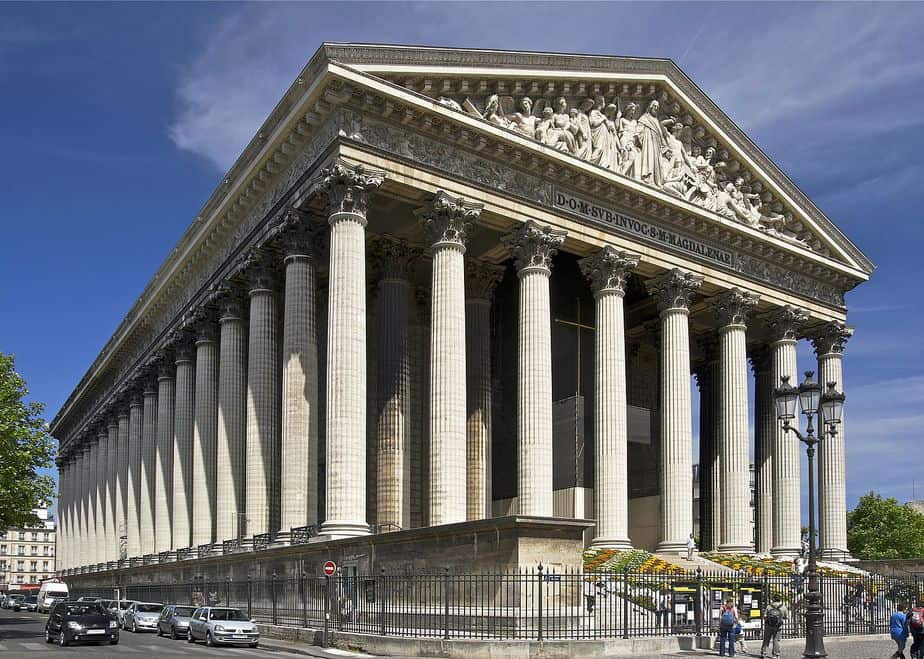 Amidst the Christmas hype in Paris, don’t forget to sign up for a free guided walking tour through the city as well. Seeing the French capital with its holiday splendor from a guided perspective makes for one memorable trip to the city!