The guillotine during the French Revolution 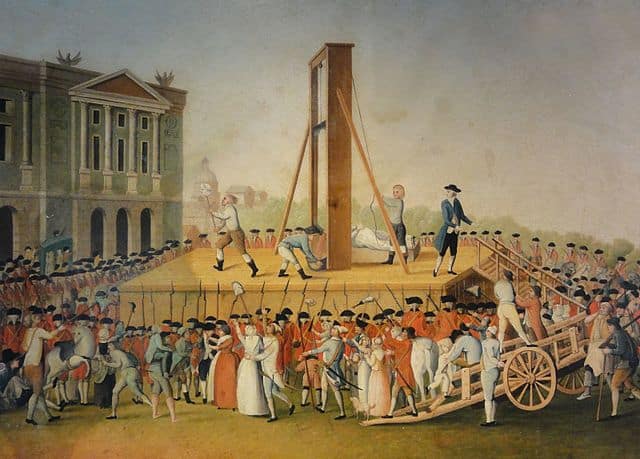 The guillotine during the French Revolution

“Off with their heads!” Okay, so maybe that’s a quote from Alice in Wonderland, but it seems like a pretty appropriate way to start this article about the guillotine during the French Revolution.

All jokes aside, the guillotine took the lives of thousands of people during the French Revolution, and was the preferred killing mechanism of the revolutionaries. It marked a time in French history which is referred to as the Reign of Terror, as it was, as you can imagine, terrifying.

What is the French Revolution? 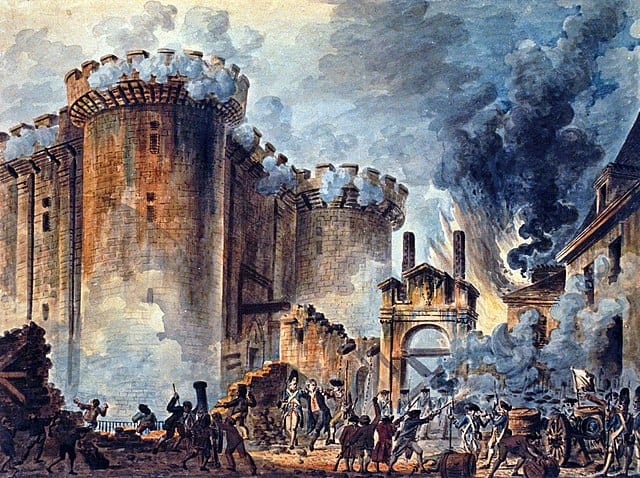 Just in case you don’t already know what the French Revolution was, I wanted to take some time to explain a little bit more.

The French Revolution began in 1789, and went on until the late 1790s. It was, and still is, one of the most radical revolutions in French history. The revolutionaries managed to completely transform the way their country was being run. Century old systems such as an absolute monarchy were removed, and it was the first step on the road to democracy.

At the time, the French people were fed up with the king, queen and the rest of the nobles in France. The taxes were high, and the money seemed to go towards funding massive parties at Versailles, rather than buying bread for the starving citizens.

Not to mention, France had just helped to fund the American Revolution against the British. The people of France just couldn’t see why all of their taxes were going towards things that they didn’t necessarily want or need. That’s absolute monarchy, for you.

Not to mention, nearly 20 years of bad harvests, droughts, livestock sicknesses and extremely expensive bread prices began to wear down on the peasant class. What was worse was that the king and queen didn’t seem to care…at all. There was absolutely no relief or aid provided to the working class at the time.

Eventually, all of this tension came to a head in the Storming of the Bastille prison on July 14, 1789. Revolutionaries stormed the Parisian prison, realising prisoners, setting fires, stealing gun powder and weapon, and causing havoc in general.

This was just the beginning of the mayhem which ensued during the French Revolution.

What was the Reign of Terror? 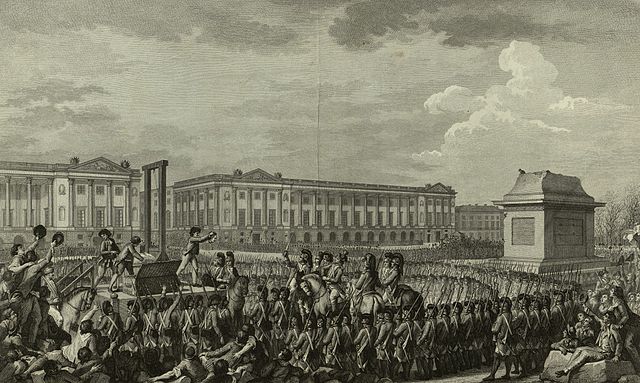 In October 1789, the royal family moved from Versailles to Paris out of fear, as since the Storming of the Bastille, angry crowds of peasants threatened to overtake the home of the French court at the time.

The family remained at the Tuileries Palace until 1791, when King Louis XVI and Queen Marie-Antoinette attempted to flee the country with their children. Their plan was found out, and the royal family was officially arrested on August 13, 1792. In late September of the same year, the monarchy was officially abolished and King Louis XVI became known as “Citizen Louis Capet.”

In December, he was put on trial and was found guilty of high treason and crimes against the state. After weeks of deliberation of what his punishment would be, it was finally decided that he would be put to death for his crimes.

On January 21, 1793, the former French king was sent to his death, by guillotine.

There are many that believe that the execution of Louis XVI marked the start of the Reign of Terror, but there are other theories as well. Some believe it began as early as September 1792, with what came to be known as the September Massacre: between September 2-6, 1792, when a number of killings occurred in Paris. Its important to note that these killings were not done by guillotine, however.

What was the guillotine? 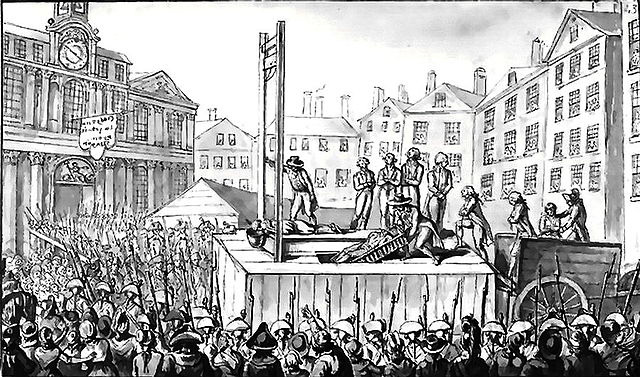 A depiction of the guillotine in October 1793 as seen in the book La Guillotine en 1793 by H. Fleischmann – WikiCommons

Although the word “guillotine” dates back specifically to the French Revolution, similar killing devices had been used since the Middle Ages. But, the origin of the French guillotine can be traced back to 1789, when a man named Dr. Joseph-Ignace Guillotine suggested that the revolutionaries create a more “humane” means of execution.

Dr. Guillotine himself was against the death penalty, but he felt that if it must be done, there should be a quick and relatively painless way to do it. Before the invention of the device, the death penalty was often carried out using a sword or an axe, and would take multiple blows to accomplish beheading. Talk about a slow and painful death. Dr. Guillotine, along with others, oversaw the creation of the new killing machine.

The first person to be guillotined in Paris was a man named Louis Collenot d’Angremont, a self-proclaimed royalist who was killed for his political views. He was sent to his death in late August 1792.

In a weirdly gruesome way, beheadings by guillotine turned into a popular form of entertainment. Thousands of people crowded around the killing machine to watch as “enemies of the state” were killed. Several songs, jokes and poems were created to honor the ceremony.

Vendors sold souvenirs and pamphlets to bystanders, and there was even a restaurant close by called the Cabaret de la Guillotine that spectators could visit before or after the public beheadings for a bite to eat.

There were groups that would attend the beheadings daily, including a group of women called the Tricoteuses (The Knitters in English), who would sit directly next to the guillotine, and would knit as prisoners were being killed. I told you it was gruesome!

But, not everyone enjoyed the show. There are reports that state that horses refused to go close to the Place de la Révolution, probably due to the massive amounts of blood that were being soaked into the dirt and mud. These animals knew that what was taking place here was unnatural, and they refused to get close to it. I tend to agree with these horses!

Who lost their lives to the guillotine? 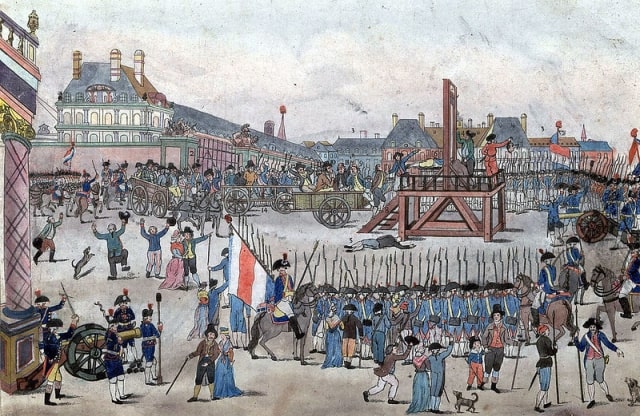 As I mentioned, nearly 17,000 people were sentenced to death by guillotine in France during the French Revolution. Here are some important names to remember:

King Louis XVI: the former French king was killed by guillotine in early 1793.

Marie-Antoinette: the former French queen was kept in prison throughout 1793, and was guillotined on October 16, 1793.

In a cruel twist of fate, many of the revolutionists that ordered the king, queen and other French noble to death by guillotine met the same fate in the tumultuous final days of the Reign of Terror. Thanks to paranoia and greed for power, some of the founders of the Revolution were sent to their deaths:

Georges Danton: a revolutionist who was tried for conspiracy, corruption and theft in 1794. Danton created his own faction of revolutionaries called the Dantonists, and Maximilian Robespierre accused him of putting his own personal interests above those of the new French nation. He was killed by guillotine in April 1794.

Maximilian Robespierre: Robespierre was one of the major players in the French Revolution, and he also played a major role in the Reign of Terror. He had some good ideas (like the abolition of slavery), but he went about achieving them through really violent measures. Things came to a head for Robespierre when he addressed the National Convention in July 1794, and was essentially booed off the stage for his paranoid speech that blamed many revolutionaries of conspiring against him. The people had finally had enough of Robespierre and his obsession with killing anyone that disagreed with him. He was swiftly arrested and put to death with his supporters on July 28, 1794.

Saint-Just: a revolutionist that was known as the “Angel of Death” for all of the people that he sent to the guillotine. Saint-Just would soon meet the same fate. He was often criticized for his fanatic use of violence, and was a major player during the Reign of Terror. He was a firm supporter of Robespierre and stayed with him until the end. He was also guillotined, along with Robespierre on July 28, 1794.

Now you know more about the guillotine during the French Revolution! I know this article was a little bit grim, so thanks for bearing with me!

I know I only mentioned a few famous French citizens that met their death with this mechanical killing machine, but I think its important to remember and pay homage to the thousands of others that lost their lives.