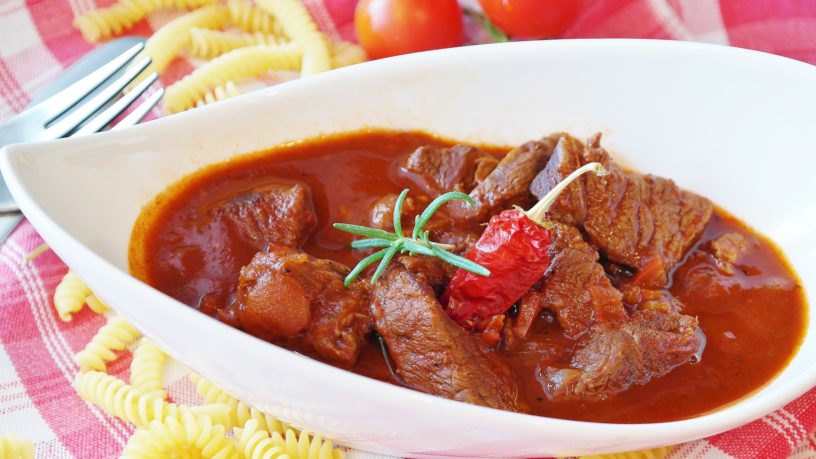 The French cuisine is one of the most renowned in the world. Just like the Eiffel Tower, or fashion, it is a cultural landmark that draws people towards France. Thanks to some of the planet’s greatest chefs, such as Vatel, Escoffier, Carême or Paul Bocuse, France has been building a stronger and stronger knowledge and mastering or culinary art, through centuries.

If you probably can name many of the French main dishes or dessert specialties, one element of a French meal is often mistakenly overlooked: the sauces. Being one of the foundations of French cuisine, transcending a meal and turning an ordinary chicken into a legendary wonder, the sauces come along most French preparations. Depending on the sauce, it can be served cold, lukewarm, or hot. Some are sweet, or salty, while others are strongly bitter or sour. Linking the distinct elements of a same course, sauces create harmony.

In French cuisine, there are hundreds of different types of sauces. But all usually derive from five main sauces, every chef must first learn to master: we call them the “Mother” sauces. 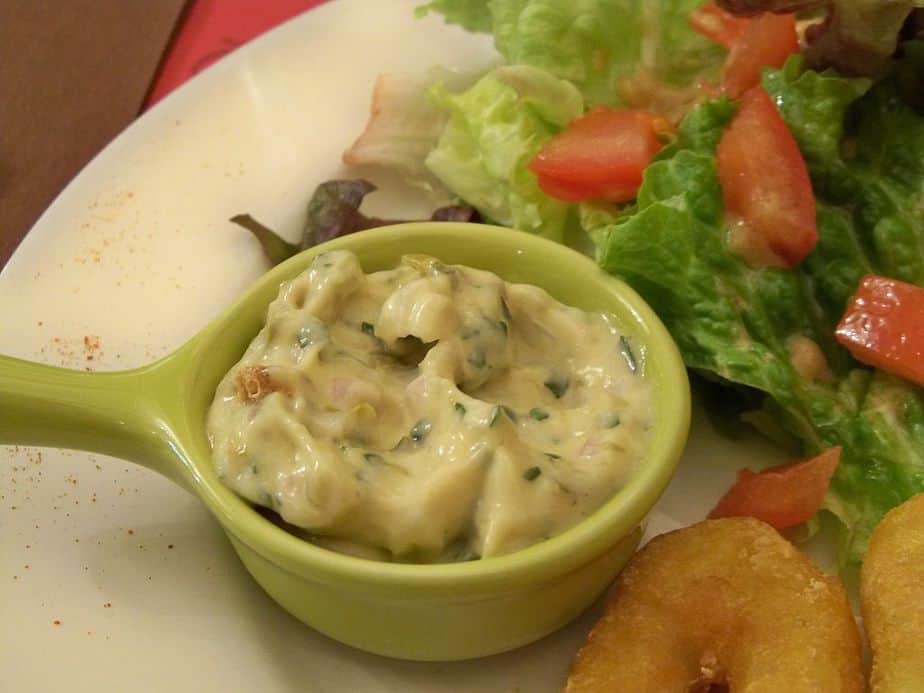 The Bearnaise sauce – Picture by Véronique Pagnier – on Wikimedia Commons

A foreword of history: getting to the five Mother sauces

Chef Antonin Carême was the first to elaborate a classification of basic sauces, in the 19th century. According to him, four sauces constituted the base of all French cuisine sauces: the tomato sauce, the béchamel sauce, the velouté sauce, and the Espagnole (Spanish) sauce. Carême massively contributed to the success of French culinary art, and he was the first cook to ever bear the title of “chef”.
Another mythic chef later added the fifth and last sauce to the list of Mother sauces: in the 20th century, chef Auguste Escoffier added the Hollandaise (Dutch) sauce. 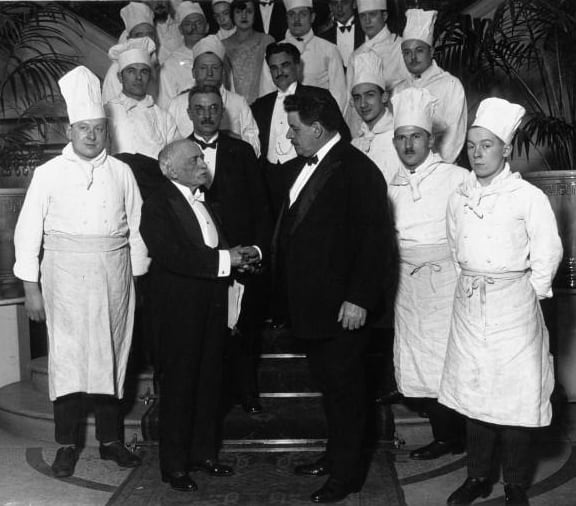 These basic sauces have their own base: le roux

Le roux (pronounced “ru”) is not a sauce per se. It is a preparation which is used as the foundation of the five mother sauces. There are three types of roux depending on their coloration upon cooking : the light or white roux, the blond roux and the brown roux.

The roux is made of fat (I personally advise you to use classic butter to make the best roux) mixed with flour. Depending on the sauce, it will be added to a liquid preparation which will give the taste and texture to the final sauce.

Recipe for the roux:

First, you will need to melt the butter in a saucepan, over a low heat.
Once melted, add all the flour, and whisk the whole preparation for five minutes, still over low heat.
The exact duration you will need to leave it to cook depends on the coloration you want.
For a light roux, remove the preparation after the five minutes, as the roux is still white.
For a blond roux, remove it once it has started to slightly color.
For a brow roux, wait until the mix has taken a light hazelnut brownish coloration.

The Bechamel sauce is one of the most renowned French sauces in the world. Its taste and creaminess make it one of the most appreciated, too. This white sauce was first created by a cook of Louis XIV’s. 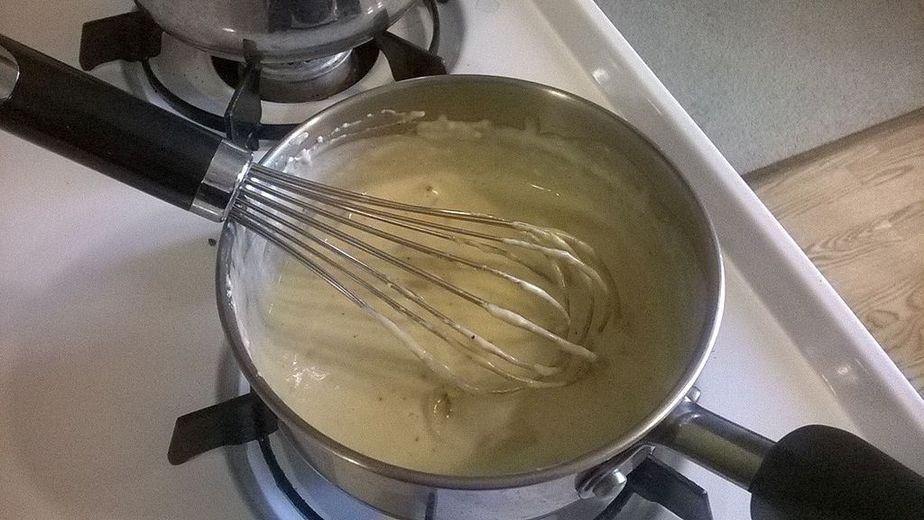 A mushroom bechamel sauce by Goblinbox, on Wikimedia Commons

Please note that you may use other condiments than nutmeg to give some taste to your sauce but I personally find nutmeg best for the Bechamel.

Make a roux and leave it to cool down for a moment.
In another saucepan, bring the milk to a boil. Transfer the milk into the pan where your roux is, little by little, all the while energetically whisking the mix to avoid lumps.
Once the whole preparation is in one pan, place it back over a low heat while stirring.

My tip : if you wish to know when your Bechamel sauce has the right consistency, dip the back of a wooden spoon into the mix. If the sauce sticks well to the spoon, then it is ready.

More used as a binding element than as an accompanying one, the Bechamel sauce can be used in any meal you wish to add creaminess to and link separate elements.

Deriving sauces:
The Bechamel sauce is used as the foundation to the following ones : the Nantua, Cardinal, Supreme, Cheddar and Mornay sauces.

The Veloute sauce is a white sauce and one of the 5 mother sauces with which most other sauces can derive from.

Recipe :
– a light roux or a blond roux
– 2 liters of chicken broth or fish broth or vegetables broth (your choice)
– 2 tablespoons of thick crème fraîche
– Salt
– Pepper
– various aromatic elements of your choice

The seasoning and the broth you choose will depend on the final veloute you want to have (and of you personal tastes of course).

Start by making a roux.
Once ready, add all of the broth you chose onto it. Energetically whisk the whole mix.
When the preparation is homogeneous, add the crème fraîche. If the creaminess of you sauce does not suit your personal preferences you may add more or less crème fraîche.

Deriving sauces :
By varying the broth your final velouté possibilities are quite endless : fish velouté, mushroom velouté, asparagus velouté…
The sauce may also be used as the base for a du Barry Cream or the Argenteuil Velouté.

The third white sauce of the 5 Mother sauces, the Hollandaise Sauce (Dutch) was created under Louis XIV and was named after a conflict opposing the two countries. 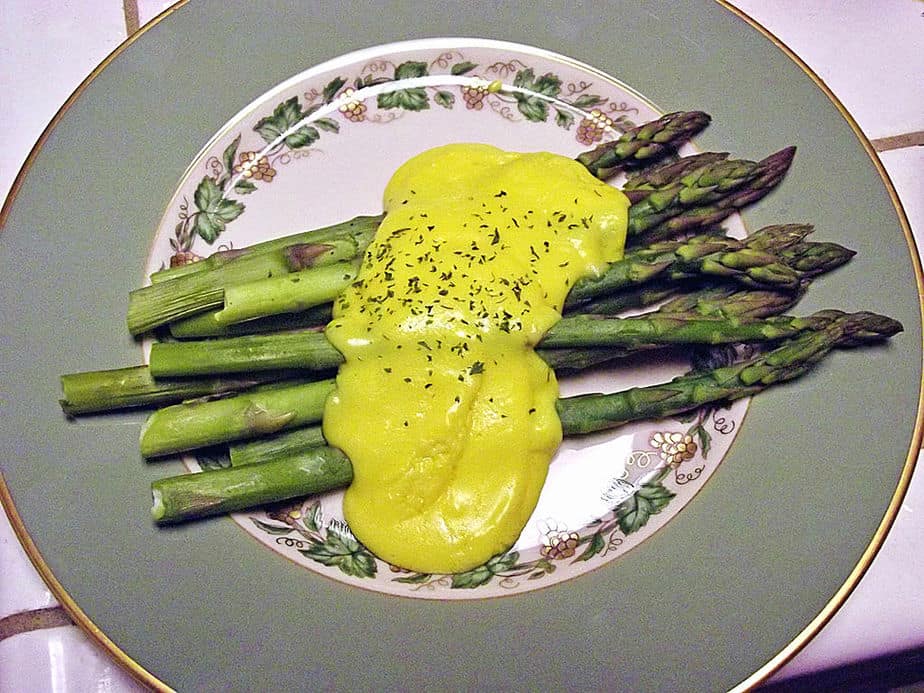 For this one, you don’t need to make a roux.
In a saucepan, mix the 3 yolks with a little bit of lemon juice and the water. When the mix becomes a bit frothy, put it over a low heat.
Keep whisking until the mix becomes creamy. Then, all the while you keep whisking, add the melted butter. The sauce is ready when the butter is entirely incorporated into the mix.
The Hollandaise sauce must be served quickly for it to keep its creaminess.

The Hollandaise Sauce is a great side sauce to eggs in all their forms. It is also great to serve with white meat such as chicken. The Hollandaise sauce can also be served with all types of fish such as salmon or hake, with vegetables or even with rice.

Deriving sauces :
The Hollandaise sauce is the base of many great French sauces including the mousseline sauce, the Maltese sauce or the famous bearnaise sauce – which is perfect when served along with rib steak.

Although often more associated with Italian cuisine, the tomato sauce is the most renowned and most common of the five mother sauces. 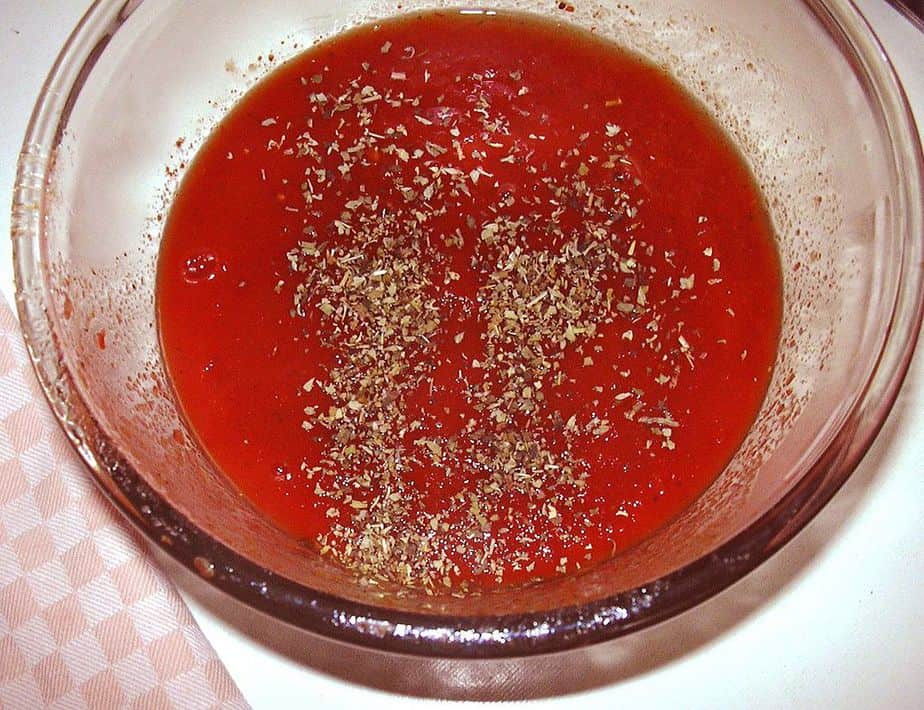 In a saucepan place the butter and the bacon over a low heat.
Add the diced vegetables.
Brown them slightly then powder the mix with flour.
Once your preparation takes a nice blonde color, add the tomato and mix it all well.
Add the broth, the garlic, the thyme, the bay, the salt and the pepper.
Raise the heat to take the mix to a boil. Then, cover it and leave it to stew for an hour over a low heat.
When your sauce has reduced, pass it through a strainer to remove all solid elements. It is now ready to be served.

Spaghetti : Add some meat to your sauce for a delicious bolognese sauce.
Gnocchi : Gnocchis with tomato sauce are classic in Italian cuisine.
White fish: The tomato sauce is very food served along with white fish.

Deriving sauces :
The tomato sauce is the basic sauce for many sauces such as the very famous Bolognese sauce, the Portuguese sauce, the Milanese sauce or the Creole sauce. 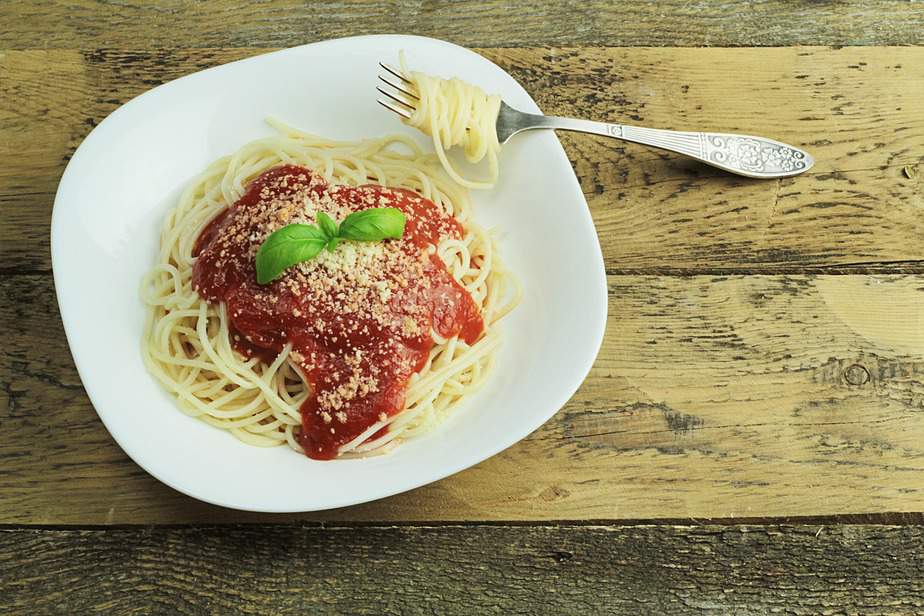 The Espagnole sauce (Spanish) is a brown sauce. Interestingly enough, its name does not mean that it was created in Spain. Rather, the French cooks of Louis XV got inspired by the recipes of some Spanish meals as the King’s family got onto the Spanish Throne with Philip V. 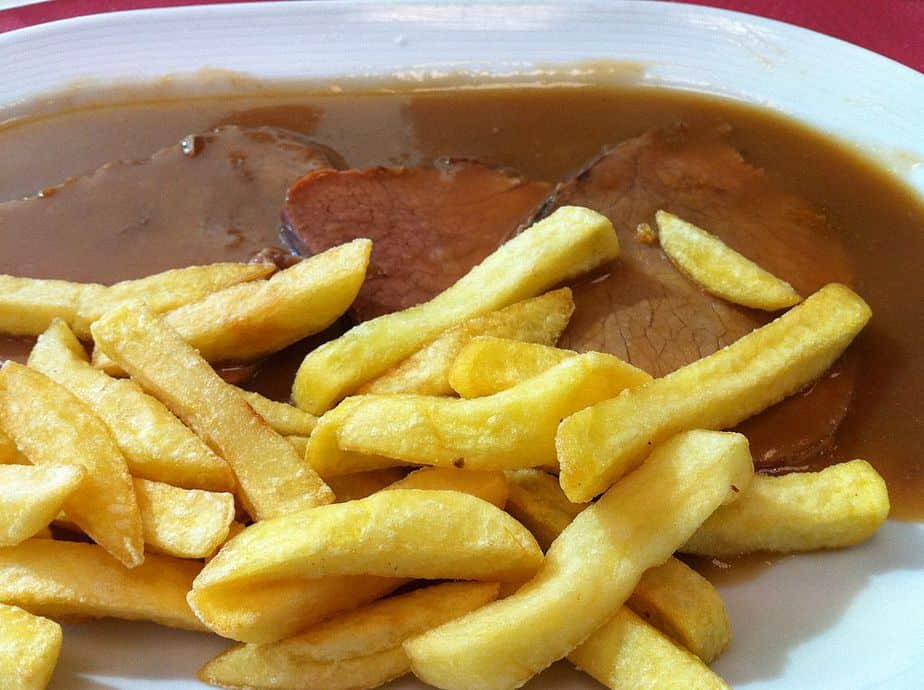 The sauce is quite complex to make and you must be used to cooking to make it.

Dice the vegetables and the lard (or bacon).
Cook them in a saucepan over a low heat. When they start turning brown, add the brown stock and bring the mix to a boil.
In another saucepan, make the roux, then pour the boiling mix onto it. Whisk energetically, and add the thyme, the bay and the tomato. Leave it all to stew for thirty minutes, then pass the sauce through a strainer.
Place the sauce onto a low heat for 5 minutes,
Let it cool down, by covering the sauce with a cloth.

Sauces are present in most of the traditional French dishes. The five Mother sauces and their derivatives will allow you to turn basic meals into gastronomic wonders. It is now up to you to play with them and see what you like and how you like to accompany your food. Don’t forget that, after all, you may always create your own ! It was once said : “England has two sauces and three hundred religions. France, on the other hand, has two religions, but more than three hundred sauces!” (Charles-Maurice de Talleyrand-Périgord) Why not add yours to the list ?

If you wish to learn more about cooking the French way, why not try our fun cooking class? Click here to learn more.