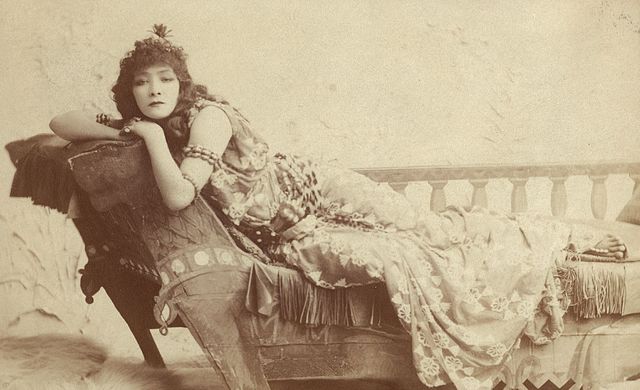 French actress Sarah Bernhardt is hailed as one of the greatest actresses of all time, and certainly one of the most famous in the 19th century. She preformed roles in plays written by heavyweights such as Victor Hugo and Alexandre Dumas (père and fils!), and even played male roles, including Shakespeare’s Hamlet!

Bernhardt lived a very interesting life, and was known to take her career into her own hands rather than waiting on others, something that was rare for a woman of her time. She was famous in France by the time the end of the 19th century rolled around, and even garnered international fame in England and the United States! 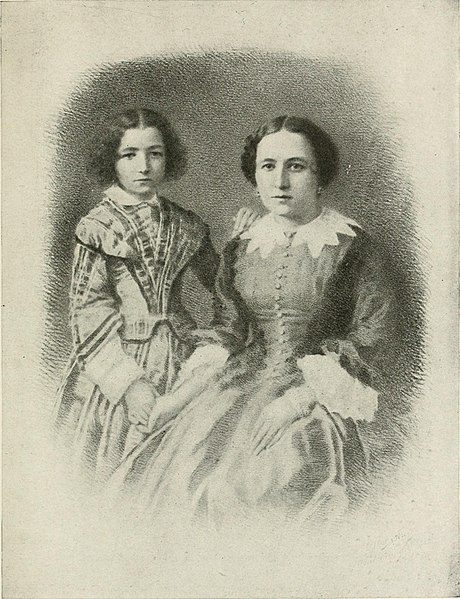 Sarah Bernhardt was born Henriette-Rosine Bernard in Paris in 1844. Her life was interesting from the moment she was born: she was the illegitimate daughter of a Dutch courtesan named Judith Bernard who was living in Paris at the time. She never knew her father, and her mother kept his identity secret. However, it is said that her father’s family consistently provided monetary support for Bernhardt.

Her mother shipped her off to a convent when she was 10 years old. In the meantime, she was moving up in the ranks of Parisian courtesans. She soon began a relationship with the Duke of Morny (Napoléon III’s half brother). When news came that Bernhardt’s father had died, her mother and Morny had to decide what to do with Bernhardt.

The Duke of Morny wanted Bernhardt to become an actress. Initially Bernhardt refused, saying that she preferred to be a nun! Soon after, Morny took her and her mother to a play being put on by the playwright Jean Racine. Their group also included the famous writer, Alexandre Dumas, père.

The story goes that Bernhardt was so moved by the performance that she began uncontrollably crying. The Duke of Morny was humiliated, and the rest of their group left. Dumas, however, was impressed. He stayed with Bernhardt to console her, and afterwards told Morny that he thought she was destined for the stage! 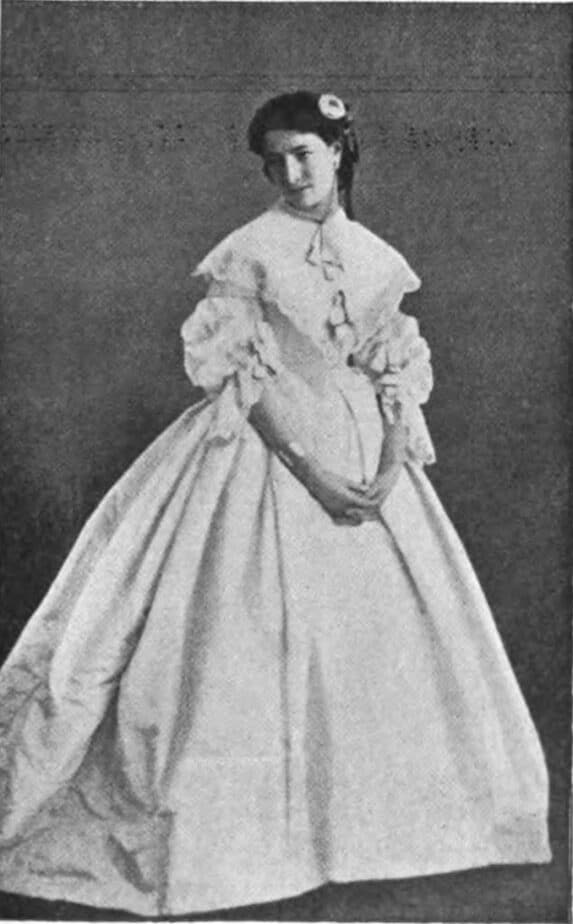 The Duke of Morny was able to pull a few strings, and Bernhardt landed an audition for Paris Conservatory, the top school for performing arts in Paris. She began preparing, and enlisted the help of Dumas! She nailed the audition, and was invited to attend the school.

While at the Conservatory, Henriette-Rosine Bernard transformed into Sarah Bernhardt. She attended the school for 2 years, and studied under some prominent actors from the mythic theatre company the Comédie Française.

Thanks to Morny’s influence, Bernhardt herself was accepted into the Comédie Française as a “beginner under probation.” This means that she had to preform 3 debuts before she was officially accepted into the company. She went relatively unnoticed by critics, and was forced to leave the Comédie Française after she slapped the face of a senior actress! It seems that Bernhardt was just as dramatic off stage as she was when she preformed.

Bernhardt took a few years off from acting to determine how she wanted to move forward. In the meantime, she allegedly had numerous affairs (Victor Hugo is on the list of her possible lovers!), and one resulted in the birth of her only son, Maurice. His father is named Henri, prince de Ligne. 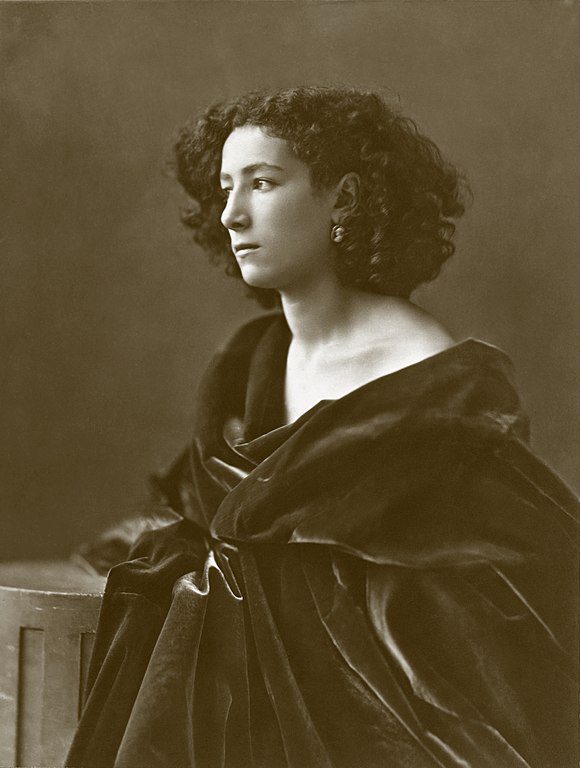 In 1866, Bernhardt signed a contract with the Odéon theatre. During the 6 years that she worked there, she established herself as an actress, and began to garner fame. She had her first real success in 1868, in a performance as Anna Damby in the play Kean, written by her pal Alexandres Dumas, père.

Her best performance at the Odéon came in 1869, when she played the leading role of Zanetto in the play Le Passant (The Passerby in English), written by up and coming playwright François Coppée. She also performed this role for Emperor Napoléon III himself.

As Bernhardt began to perform for larger audiences and for politicians and leaders, she was soon praised for her talents. She had a really distinctive voice, that was described like a “golden bell,” or “silvery.” However you want to describe it, the public loved her.

In 1872, Bernhardt returned to the Comédie Française. After a shaky start, earning very few roles, she was soon thrown back into the spotlight with her portrayal of the main role in Zaire by Voltaire, and again in Jean Racine’s Phèdre. Critics were hesitant to praise her, but after her amazing performances they had no choice!

In 1879, the French actress was in the prime of her career. She joined the Comédie Française in London and played in the second act of Phèdre. The English public loved her, and an international career was soon within Bernhardt’s grasp! 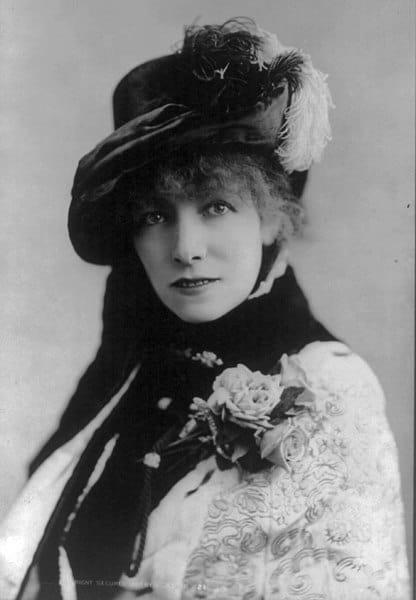 Bernhardt took her career into her own hands and created her own traveling company in 1880. She was known for her vigorous self-promotion, and thanks to this she soon became a household name in France, England, America and Canada.

She was in charge of running her company, finding talented actors and actresses and performing in roles herself. She performed for the first time in New York City in 1880, and traveled to the US eight times after that.

Something else pretty special happened for Bernhardt in the 1880s – playwright Victorien Sardou began writing dramatic plays for Bernhardt to play the main role. Bernhardt preformed in Fédora (1882), Thédora (1884), La Tosca (1887), and Cléopâtre (1890), respectively, for Sardou.

In the 1890s, she and her company started a world tour that included going to Australia and South America! During her time in South America, Bernhardt severely injured her knee during one of her performances. Several years later (in 1915), gangrene had set in and she had to get her leg amputated. That didn’t stop Bernhardt! She continued to perform, and even went to visit soldiers on the front lines during World War I. More on what she got up to in the early 20th century later.

One of her most notable international performed was the title role in Hamlet by Shakespeare in 1899. She played Hamlet (a male role, of course), and was hailed for her performance. She was one of the first women ever known for playing the role. She played another male role in Edmond Rostand’s play L’Aiglon in 1900. 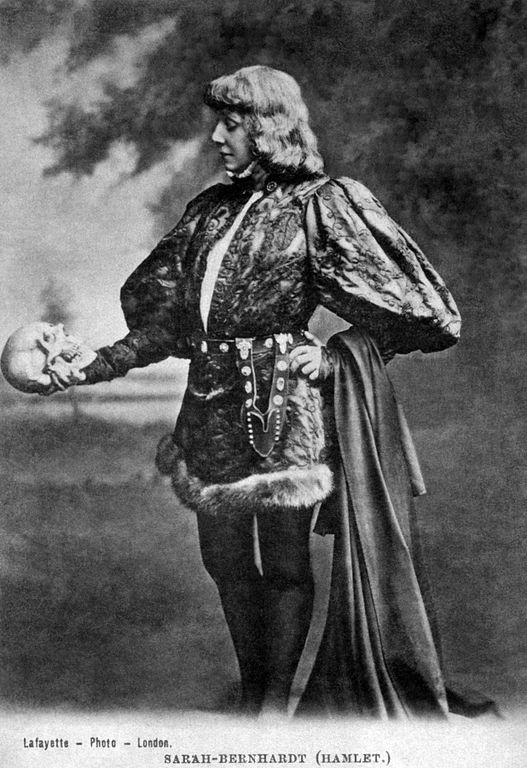 In 1893, Bernhardt become manager of the Théâtre de la Renaissance, and 6 years later she relocated to the Théâtre des Nations which she renamed Théâtre Sarah Bernhardt. She remained manager there until she died in 1923. After the German occupation of Paris during World War II, the theatre was renamed (and remains today!) to the Théâtre de la Ville.

In 1916, just 1 year after her leg was amputated, Bernhardt embarked on her last tour of the United States. The tour lasted 18 months, and when she returned home to France in 1918, she began another tour.

Since Bernhardt was now in a wheelchair, new roles were written for her. Unfortunately, her health continued to decline, and she even collapsed while rehearsing for a role in playwright Sacha Guitry’s play Un Sujet de roman (A Subject for a Novel in English). She recuperated afterwards, and worked with Hollywood directors on the movie La Voyante (The Clairvoyant in English). The movie was being filmed in her Paris home when she died in 1923.

In the end of her life, Bernhardt published a novel called Petite Idole (Little Idol in English), and the main character was loosely based on her own life. She also published an autobiography called Ma Double Vie: mémoires de Sarah Bernhardt (My Double Life: Memoirs of Sarah Bernhardt) in 1907.

Actress, writer, manager and more, Sarah Bernhardt lived a full life. She dazzled her audiences and is still considered to be one of the greatest actresses of all time! I hope you’ve enjoyed this brief history of her life.