The Best Rooftop Restaurants in Paris

The Best Rooftop Restaurants in Paris

This city isn’t known for towering skyscrapers throughout the arrondissements, but many of the taller Haussmann-style buildings offer expansive rooftops all with a superior view over the city below.

Some of the best restaurants in town managed to snag rooftop venues as their home base early on in development, and now diners can enjoy their meals with a view of the Eiffel Tower gleaming in the distance. Here are a few to check out.

Le Rooftop gives you a view of Paris that you tend to see on postcards or computer wallpapers. It’s situated right by the Arc de Triomphe; a neighborhood littered with Haussmann architecture and higher rising hotels.

Le Rooftop is fine dining but keeps the menu short and bar-style. You won’t eat a three course meal here, but rather snack on light plates accompanied by beautiful crafted cocktails. 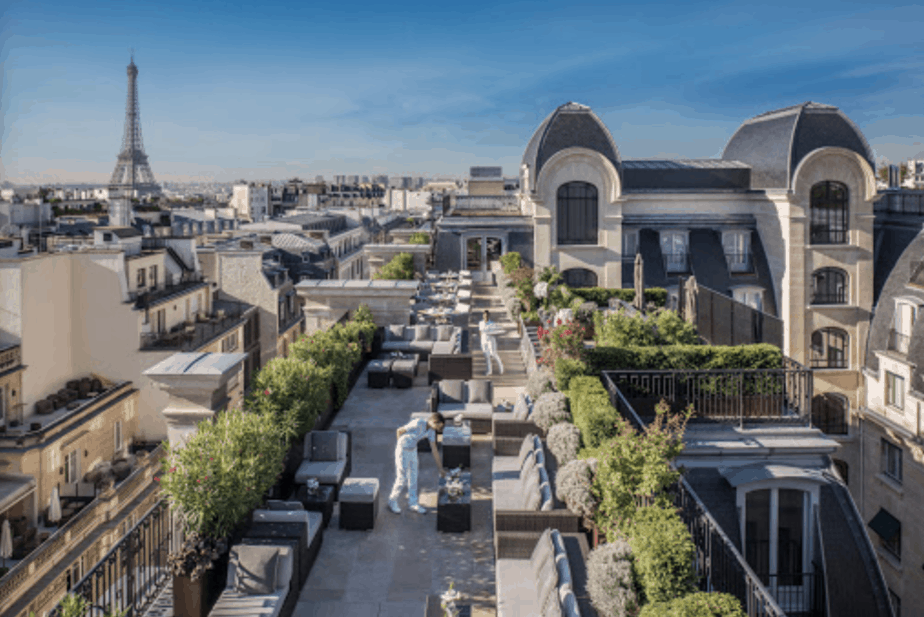 Le Rooftop in Paris – by Le Rooftop – Uploaded by them

The rooftop has a strict dress code for all attendees. You won’t be permitted access if you show up in shorts and sandals, regardless of the time of day or outside temperature. Dress to impress, folks!

Opening Hours: Monday to Sunday — 12pm to 1am

Les Ombres is on the bank of the Seine, just to the right of the Eiffel Tower.

It’s not the highest rooftop in the city, but thanks to the surrounding neighborhoods being of considerably lower nature, you get some fantastic panoramic views from up here. Mostly, you’re overlooking the extensive Right Bank from the left. One can see most of the 16th arrondissement as well as the 8th. 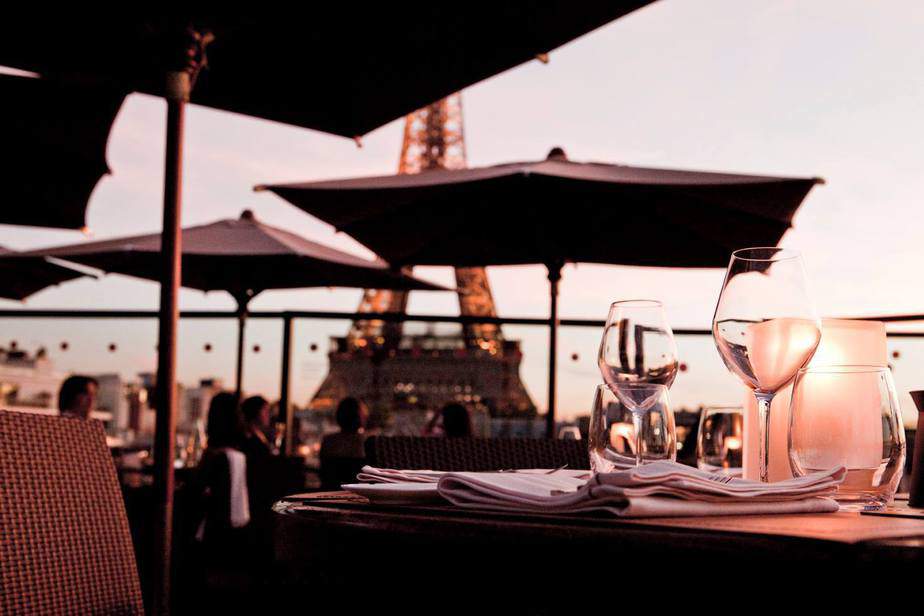 Les Ombres in Paris – by Les Ombres – Uploaded by them

The left side of the rooftop boasts astounding views of the Eiffel Tower, and if you’re dining by night this is absolutely where you want to be seated come the hourly light show.

The menu is authentic French but with a very distinct fine dining flair. Les Ombres is known for being an expression of culinary arts.

L’Oiseau Blanc is back where the first restaurant we looked at was; close to the Arc de Triumph in the 8th arrondissement. This one faces the opposite direction, boasting some truly whimsical views over the Eiffel Tower and respective Left Bank.

The restaurant is carefully divided into both indoor and outdoor seating. In the winter, it’s only those willing to brave the cold who opt for the outdoor, but in summer you’ll need to book well in advance to get a chance at one of these tables. 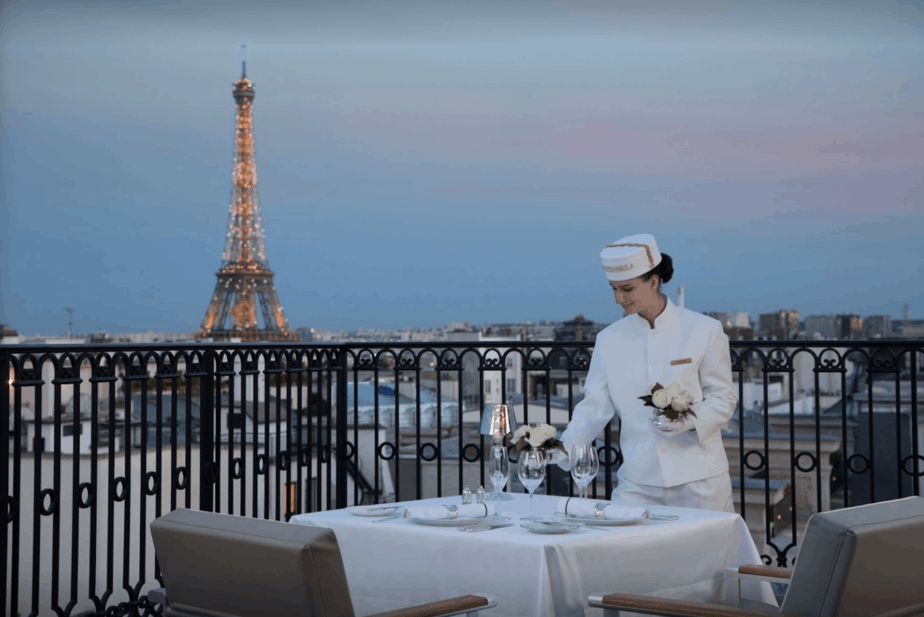 Another restaurant using their unique platform to bring French culinary arts to the people of Paris. This is ten star dining, if there ever were such a thing.

Okay, The 43- Roof Top isn’t a restaurant at all, but I couldn’t resist including it on this list as it’s absolutely an unmissable rooftop while in Paris.

The rooftop sits out on the Left Bank just across from the Notre Dame Cathedral. It’s unusual to find rooftop spots in this part of town, but the view is one of more perspective as it encompasses the Eiffel Tower district from much further back. 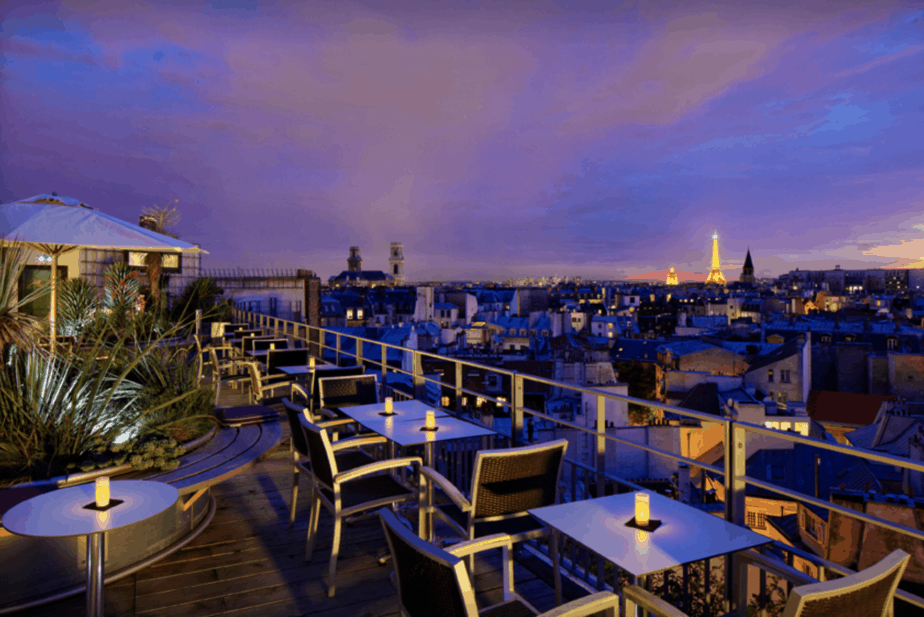 The 43- Roof Top opens each evening and gives guests somewhere to enjoy a drink or two before a proper night on the town. Booking is usually recommended in peak season, especially if you want one of the better tables on the terrace.

This rooftop restaurant is, again, a short walk from the Arc de Triomphe. The view of the Eiffel Tower itself is present, but limited, as the restaurant rather faces out toward the far east of the city.

This is a beautiful, cozy and wholesome place to eat some genius culinary takes on traditional French classics. 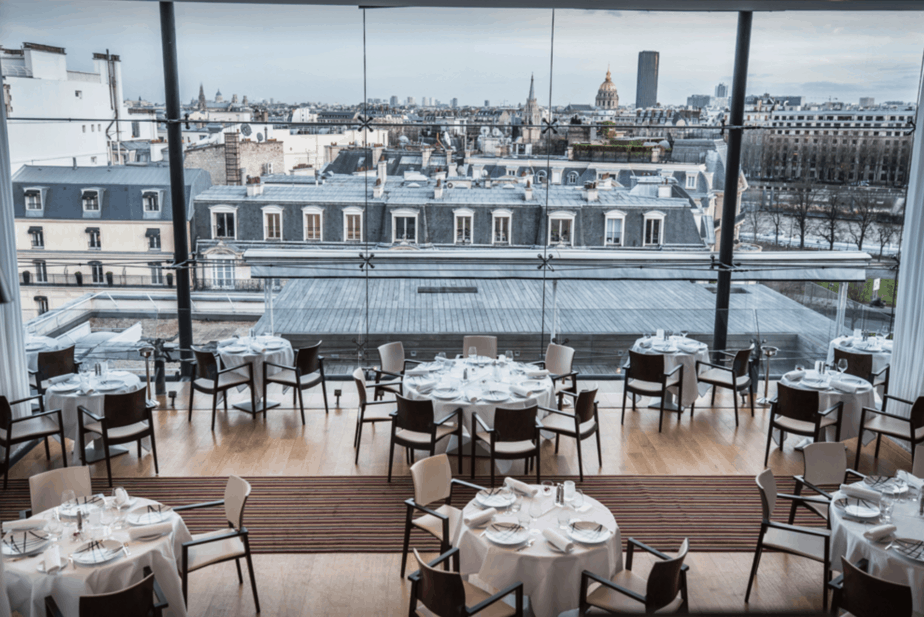 After 10pm on weekends, Restaurant Maison Blanche brings in a DJ who will turn the evening into a more rhythmic, soulful experience. It goes without saying that booking is essential at this spot most nights of the week.

Perruche is interesting because you find it nestled perfectly between the 1st and 9th arrondissements. It’s less concerned with impressive views over Paris (although certain zone of the restaurant do offer this) and more so simply concerned with giving people somewhere in which to dine under the sky.

It’s situated on the rooftop of the Printemps building; a department store for luxury fashion houses in Paris. This rooftop is for couples, families and friends who like good wine, delicious food and the sweet smells of nature whacking through he elevated fresh air. 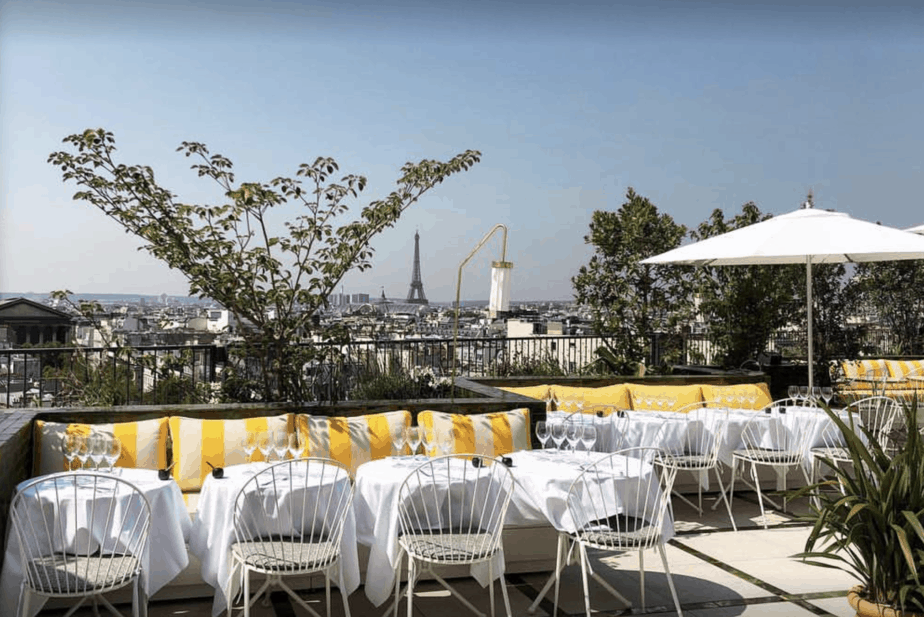 Perruche in Paris – by Perruche – Uploaded by them

I would call the menu contemporary dining with a twist. It’s not necessarily vegan friendly, but the staff will go out of their way to create something suitable for people of all diets.

When you’re not spending time on the rooftops of Paris, make a point of joining a free guided walking tour or two on the ground.