The Best Restaurants near La Maison Rose in Montmartre 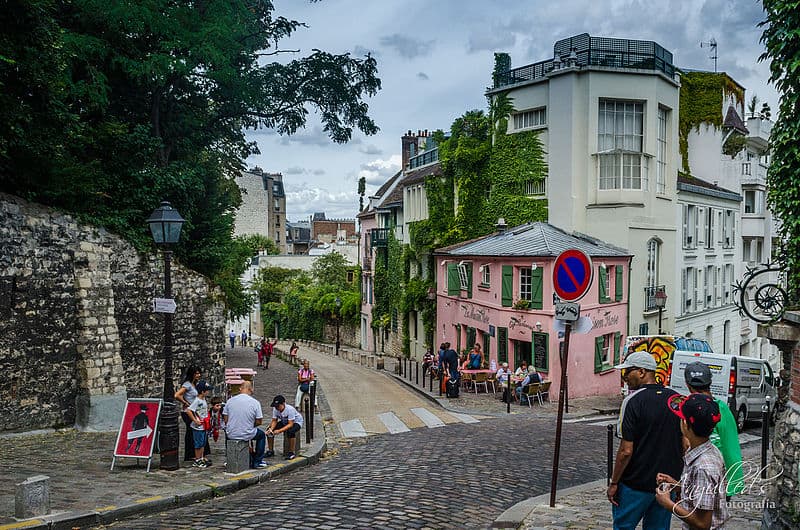 The Best Restaurants near La Maison Rose in Montmartre

Most people are astounded to learn that La Maison Rose actually existed before Montmartre did. Wrap your head around that for a second;It is estimated that La Maison Rose was constructed in 1850, though the exact date is largely uncertain. Montmartre was only officially classed as a community in Paris in the 1860s.

To put things into perspective: La Maison Rose has been serving coffee and other things for over 100 years. That’s 100 years of service to the district if Montmartre and the millions of visitors who make their way here each year. 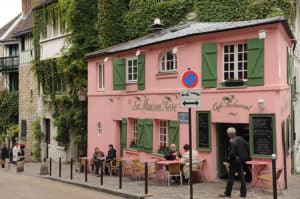 Since this spot tends to be packed with tourists at the best of times, a lot of people simply pass by to snap an iconic picture, and then proceed to dining elsewhere in the neighborhood. I’m here to tell you some of the best places in which to do so.

A two minute walk from la Maison Rose will bring you to the Restaurant Le Poulbot. It’s a traditional French restaurant and the entire interior is made of light wood.

Because of its intimate size, reservations are recommended by not mandatory. You can expect a 30 minute wait if you arrive unannounced, which is best spend wandering the adjacent streets or visiting the church nearby. Expect delicious French dishes and delicacies!

The Hardware Societe near La Maison Rose in Montmartre

The Hardware Societe is the cafe hangout of choice for the residents of Montmartre and Parisian locals. While the tourists head west of Montmartre to the more  famous cafes, the locals know where to avoid the crowds; unfortunately in doing so they create crowds of their own.

Inspired by Australian brunch culture (which is probably the single most competitive brunch scene after Paris) The Hardware Societe has a branch in Melbourne and right here in our beloved Montmartre, a short walk from la Maison Rose.

Get here early if you’d like to take part in brunch. The Hardware Societe makes the best Eggs Benedict in Montmartre. Their French Toast is also decadent, to say the least.

OPENING HOURS: MONDAY TO SUNDAY – 9AM TO 4PM

Situated north of la Maison Rose (walkable distance), this is an authentic brasserie right in the heart of Montmartre. The restaurant does a range of dishes spanning from burgers to steaks. It is somewhat of a French/American hybrid, though the flavors are distinctly authentic to this native land.

5 Burgers with a Twist in Paris

I will say that Le Café de la Poste is a tough one for vegetarians and especially vegans. Most of the menu is comprised solely from meat other than a few small vegetable based sides.

If you are dining with one or more other people, I highly recommend sharing the cheese platter and a bottle of house wine. If you’re alone, then the burgers are perfectly portioned.

Opening Hours: Monday to Sunday — 7am to 2am

This spot near la Maison Rose is pretty upmarket but still quite affordable. The Sacred Flower sits just slightly to the east of the Sacre Coeur.

The name suggests a meditative space, and that’s exactly how you’ll feel when you settle in for dinner at the Sacred Flower. Their playlist of classical music fills the space, making it very hard to remember what era you’re in.

On par with the fame that la Maison Rose holds, le Petit Moulin is the epitome of cafe dining in Paris. The exterior looks like a bright witch house built into the cornerstone of a regular building. It is constantly being repainted in quirky animations. Once inside, you’ll find it hard to succumb to le Petit Moulin’s charm. 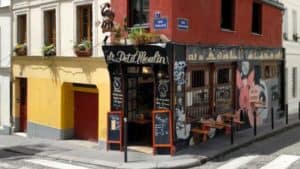 Interestingly, this is an evening cafe in Montmartre. This is unusual to the area but a welcome addition to the nightlife. They only open their doors at 5pm and serve their cafe menu through until 11pm.

5 Things You Need to Know About Montmartre’s Windmills

Situated just one block south of la Maison Rose, the Brasserie Thaï is a restaurant seeking to establish itself as a typical brasserie but with a Thai menu.

Somehow, it works. The food is authentic and flavorful and the service is representative of some of the best brasseries in Paris. The best part being the abundance of vegetarian dishes in this cuisine which means they cater for a wider range of dietary requirements compared to usual brasseries.