The 4 Best Movies About Édith Piaf 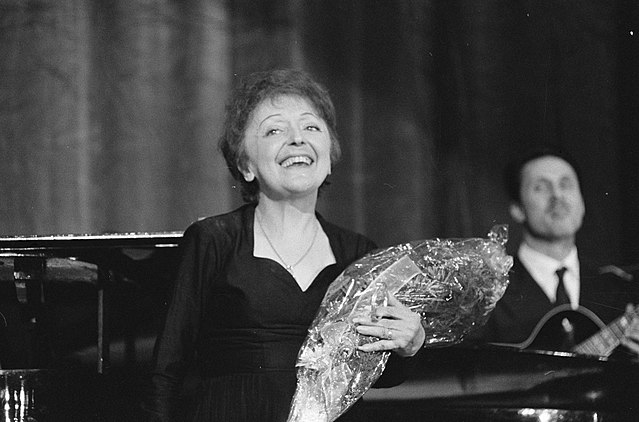 The 4 Best Movies About Édith Piaf

I’m sure that almost all of you reading this article have heard of the song “La Vie en rose.” Even if you don’t know the name of the person who sang it first, I’m sure that many of you now have the tune stuck in your head! While you try to get it out, let me distract you with a little bit of background Édith Piaf, the French singer behind the iconic “La Vie en rose.”

Édith Piaf is often considered to be one of France’s most famous stars. She is widely known around the world for her emotional ballads that touch on love, life, and loss. In addition to being a singer, she was also a songwriter and a cabaret performer. She also starred in a few films herself!

She is lovingly referred to as La Môme Piaf (The Little Sparrow) in her home country and in other places where French is spoken. Piaf is French slang for sparrow. In addition to “La Vie en rose” (which translates literally to “life in pink,” but is a play of the idea of seeing the world through rose-colored glasses. Who said it first? We may never know!), she is also very well known for her song “Non, je ne regrette rien,” which means, “No, I don’t regret anything.”

There isn’t much information out there about Piaf’s early life, but she was born in Paris in 1915 as Édith Giovanna Gassion. At the outbreak of World War I, her father enlisted in the military and left her (at this point her mother had abandoned both of them) with his mother at the brothel that she owned in Normandy. There, she was raised by her paternal grandmother as well as the prostitutes working at the brothel.

Piaf was discovered in Paris in 1935 and her singing career took off from there. She was accused of being a collaborator during WWII as she decided to stay in Paris and was known to perform for German soldiers and other French collaborators. Ultimately Piaf was saved from going on trial because someone who was involved with the French Resistance defended her.

Piaf had a very troubled and tumultuous life until her early death at age 47. She had a child when she was 17 years old who died just two years later. She was involved in several car accidents which left her with a morphine and alcohol addiction that she never did get help for.

In 1963, after years of medication and alcohol abuse, Piaf died in her second home in the South of France. According to reports, her last words were “Every damn thing you do in this life, you have to pay for.” Piaf sadly found this out the hard way.

Surprisingly, there really aren’t that many great movies out there about Édith Piaf. In case you still have that song in your head and want to learn even more about this world-famous French singer, I’ve chosen the 4 best movies about Édith Piaf below!

This 1974 film is based on a novel by the same name. Piaf was written in 1969 by Simone Berteaut. Simone was one of Piaf’s closest friends and the two often referred to themselves as half-sisters. They met when they were in their teens, and went on to sing and perform in the streets of Paris.

The movie shows Piaf from her birth to her childhood in the Normandy brothel to her arrival in Paris. As mentioned, Piaf (along with Simone) wandered the streets of Paris before she was discovered by Louis Leplée, a director of a cabaret. The movie follows Piaf until 1937, when she had her big breakthrough at l’A.B.C., a former cabaret in Paris. If you want to learn more about Piaf’s time in Paris before she “made it,” you’ll enjoy this one!

Piaf had several boyfriends and husbands throughout her life, but, the love of her life was a French professional boxer named Marcel Cerdan. When the pair got together, they were both at the pinnacle of their careers, Piaf as a singer and performer, and Cerdan as a boxer.

Sadly, their two-year relationship was cut short by tragedy. In October 1949, Piaf was in New York City. Cerdan boarded a plane in Paris to go and meet her in the United States, but the plane would never make it there. The plane crashed above the Azores and everyone on board was killed, including Cerdan. Édith et Marcel is above Piaf and Cerdan’s love story leading up to Cerdan’s death. If you want to learn more about one of the most important relationships in Piaf’s life, add it to your to-watch list!

Not to be confused by the 1974 movie above, Piaf (1984), is based on a play of the same name. The play debuted in the United States at the Plymouth Theatre on Broadway in 1981 and went on to run for a whopping 165 performances! After the success of the play, its screenwriter Pam Gems decided to make it into a movie!

This American film shows the rise and fall of Piaf: from the streets of Paris to her days of fame and fortune on stage, to her death.

The best (and most recent) for last! La Môme (La Vie en Rose) is a 2007 film that stars Marion Cotillard as Piaf and it is my absolute favorite movie on Édith Piaf’s life. It’s also one of my favorite performances by Cotillard. After the film was released and Cotillard spoke about her experience during filming, she said that it was one of the most difficult roles that she ever played. Cotillard’s emotion is visible during the movie, and I can only imagine what she must have gone through to get into character and stay there!

This movie is the ultimate for Piaf lovers. It follows her entire life, from infancy all the way up to her death. It is beautifully shot and filled with ups and downs: much like Piaf’s life. Both Cotillard and the film itself went on to win international awards, and the end will have you in tears. A must-watch!

Now that you have all of the background information on Piaf that you need plus a few movie recommendations, you’re well on your way to learning everything that you need to know about this incredible French superstar. Enjoy!