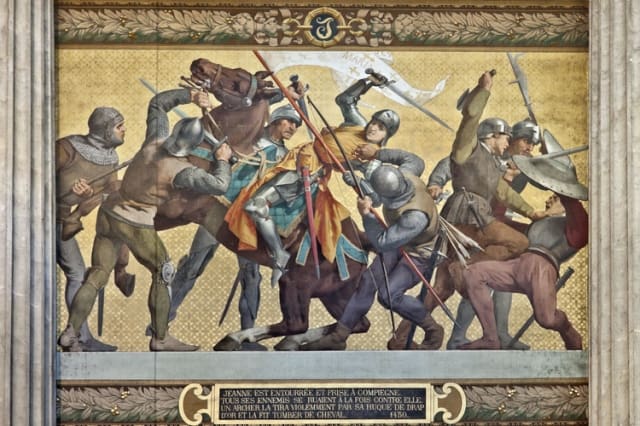 Joan of Arc captured by the Burgundians at Compiègne. Mural in the Panthéon, Paris - WikiCommons

Joan of Arc has become a household name since she lived in the 15th century. Nearly everyone has heard of this courageous woman who disguised herself as a man and led her people against the English – and won!

Joan of Arc unfortunately met a horrific death after she was captured by the enemy: the Anglo-Burgundians, who were a group of French people that sided with the English of the 15th century.

If you’re interested in learning more about her untimely death, you’ve come to the right article. Keep reading to learn 10 things you didn’t know about Joan of Arc’s death.

1. Joan of Arc made a promise to Charles of Valois 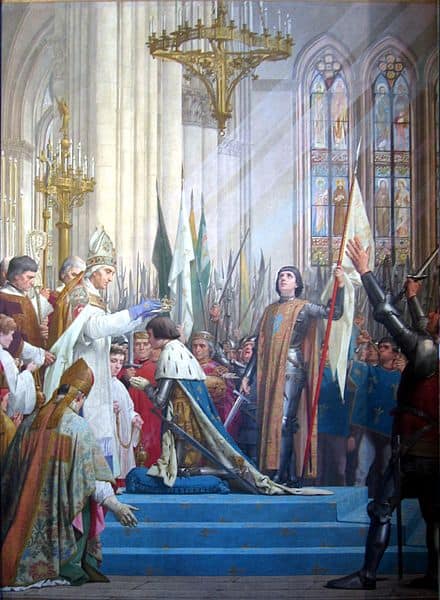 Before I get into the specifics of what happened to Joan of Arc after she was captured by the Anglo-Burgundians, I want to give you a bit of background information as to why she was fighting for Charles of Valois in the first place.

When Joan of Arc was just 13 years old, she began to have visions. These weren’t just any visions: she claimed that she had been visited by several religious figures, including archangel Michael, Saint Margaret, and Saint Catherine of Alexandria. They instructed her to lead France to victory against England. The two countries had been involved in the Hundred Years’ War.

Although Joan was just a young girl with no military experience, Charles agreed and let Joan an army to Orléans. Against all odds, Joan and her army won! 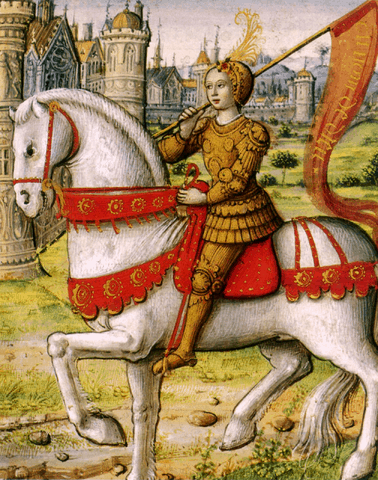 After Joan of Arc successfully won back Orléans from the English and their French allies the Burgundians, word quickly spread of her victory. She went on to lead her troops and Charles of Valois to Reims, where Charles was crowned as King Charles VII.

All was well, until King Charles ordered Joan to lead an army to the French town of Compiégne, which had recently come under attack by the Burgundians. Joan agreed but as she was attempting to defend the town, was thrown from her horse.

She was left outside the town’s gates and the Burgundians took her prisoners. They brought her to the town of Rouen, where the English were occupying the Bouvreuil castle.

3. The Anglo-Burgundians tried to get rid of Joan of Arc and King Charles VII 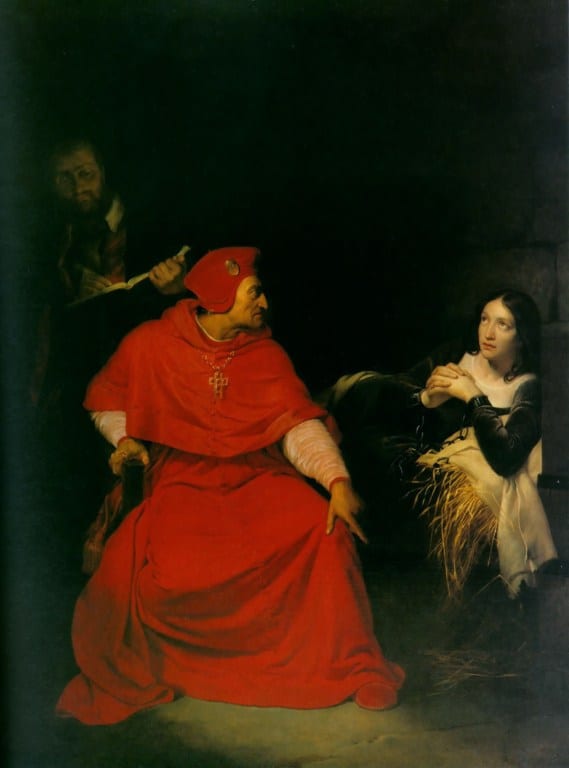 Joan of Arc was captured by the Anglo-Burgundians because they saw her power and were afraid of her. They also wanted to discredit King Charles VII, who they felt only rose to power thanks to Joan.

King Charles VII did in fact owe his crown to Joan of Arc, as without her he would have never made it safely to Reims in order to be coronated. King Charles seemed to soon forget everything that Joan of Arc did for him, as though he knew she had been captured, he did nothing to try to save her.

Joan didn’t go down without a fight, and tried to escape captivity several times. She even jumped from a 21 meter tower and survived, but was quickly recaptured. She was then moved to the town of Arras, before being moved back to Rouen.

4. Joan of Arc was charged with witchcraft and heresy 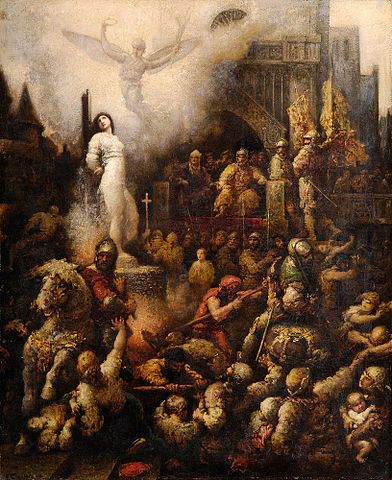 There were close to 70 charges against Joan of Arc, and the major charges were witchcraft and heresy. Scholars say that the heresy charges were more politically motivated than religiously.

The Anglo-Burgundians wanted to make an example out of Joan of Arc, mostly due to the humiliation they suffered after being defeated by a teenage girl and her army. Her trial was vastly unjust, as the tribunal was made up completely of English and English supporters.

There were other reasons why Joan’s trial was unjust. The court could find no evidence to support their claims against her, and they refused to give her a legal advisor. The fact that the trial moved forward anyways violated ecclesiastical law.

The Anglo-Burgundians were able to move forward with the unjust trial because they threatened to kill anyone who got in their way. This included many of Joan’s supporters, and even the Vice-Inquisitor of Northern France.

5. Joan of Arc was also charged with cross-dressing

In addition to the charges of witchcraft and heresy, Joan of Arc was also charged with cross-dressing. While a woman in men’s clothing wouldn’t turn many heads today, in the 15th century this was a serious offence.

The Anglo-Burgundians were seriously offended that Joan chose to dress as a man. An opening statement from the trial reads as so:

“The report has now become well known in many places that this woman, utterly disregarding what is honourable in the female sex, breaking the bounds of modesty, and forgetting all female decency, has disgracefully put on the clothing of the male sex, a striking and vile monstrosity. And what is more, her presumption went so far that she dared to do, say and disseminate many things beyond and contrary to the Catholic faith and injurious to the articles of its orthodox belief.”

Joan was not only heavily questioned on the religious visions she claims to have received, but also on her choice to dress like a man. Joan defended herself, stating that she felt more comfortable in men’s clothing when she was surrounded by men. She also stated that she was sexually assaulted by the English when she was dressed in women’s clothing.

6. Joan of Arc eventually broke down and signed a confession

Understandably, after hours of questioning and months of imprisonment, Joan of Arc eventually broke down and signed a confession. In the confession, she denied ever receiving religious visions.

Since Joan agreed to sign the confession, her sentence was minimized from the death penalty to life in prison.

7. But, then Joan of Arc wore men’s clothing again 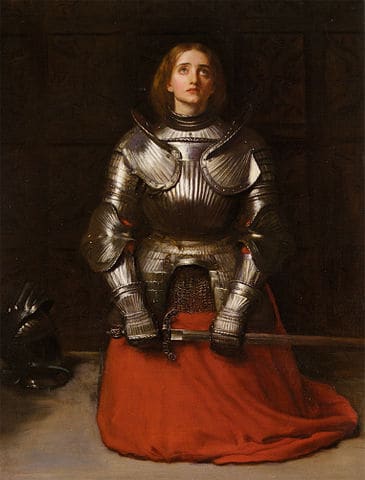 Joan of Arc’s confession was clearly just a moment of weakness for Joan, as a few days later she started wearing men’s clothing again and claimed that she had received some other visions.

She was swiftly put back on trial. Like the rest of the proceedings up until this point, many ecclesiastical laws were broken. There even existed a few religious texts that backed up Joan’s reasons for wearing men’s clothing. She feared rape by her English captors, which clearly justified her actions.

The trial moved forward anyways, and all 27 members of the tribunal found her guilty, and thus sentenced her to death.

8. Joan of Arc was burned at the stake 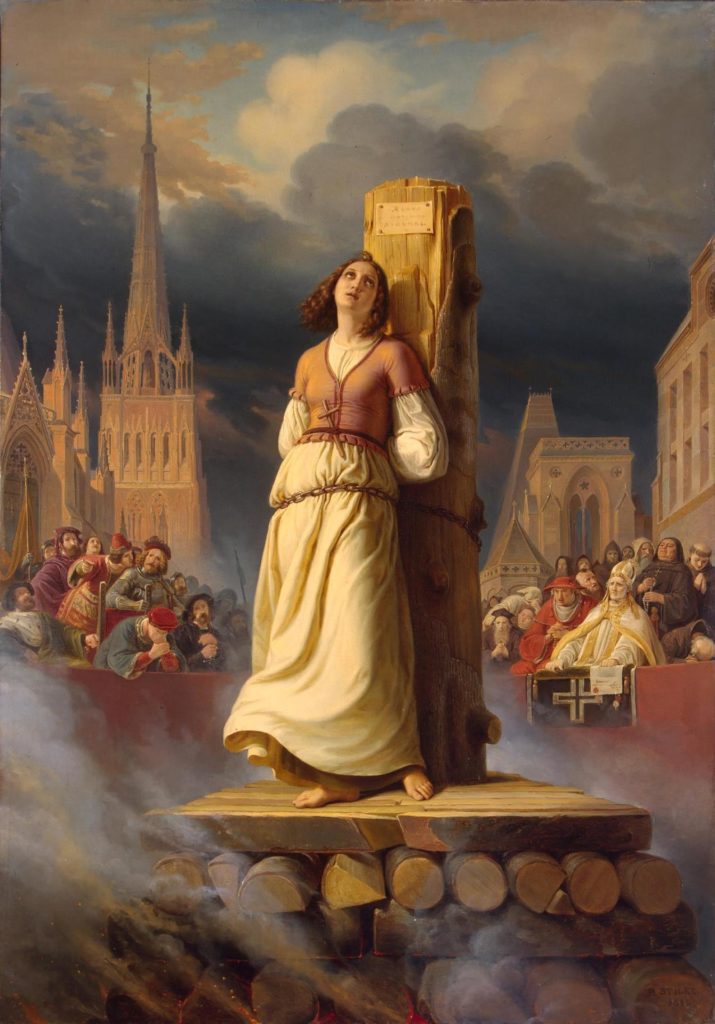 Right-hand part of The Life of Joan of Arc triptych, Joan of Arc’s Death at the Stake by Hermann Stilke – WikiCommons

Joan of Arc was burned at the stake in the Rouen marketplace on May 30, 1431. She was allowed to ask two clergymen to hold a crucifix in front of her body as she was burned.

In order to ensure that Joan had died, the English raked back the coals over her body so that everyone could see that she had perished. Then, to be extra sure, they burned her remains again. The English then dumped what was left of her in the Seine River.

Her executioner, a man named Geoffroy Thérage, was later quoted as saying that he feared being damned for killing a holy woman. Joan was 19 years old when she died.

9. A trial held 20 years after her death cleared Joan of Arc’s name 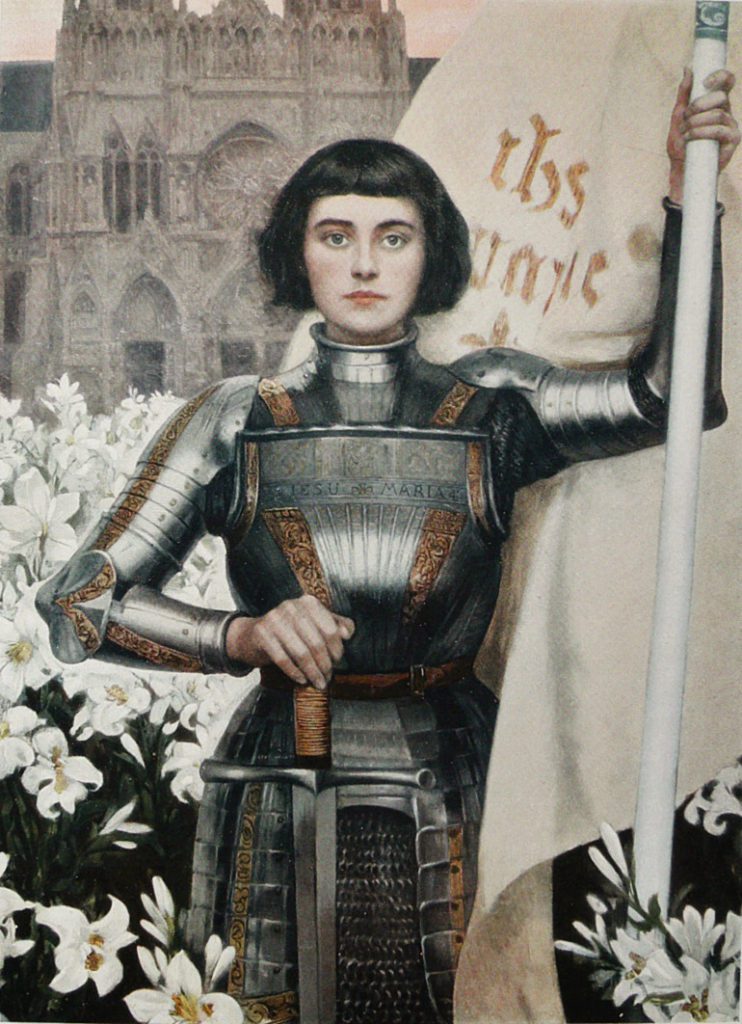 Engraving of Joan of Arc from Figaro Illustre magazine, 1903 by Albert Lynch – WikiCommons

After Joan of Arc’s death, the Hundred Years’ War continued for 22 more years. Throughout the years of fighting and destruction, King Charles VII was able to retain his crown and remain king of France.

In 1456, King Charles ordered that Joan’s case be reinvestigated in the hopes of clearing her name, even after death. He declared her innocent of all charges, and declared her a martyr for France.

Joan’s terrible death was very well known across Europe, and she became even more famous. She inspired several works of art and literature and she even became the patron saint of France after she was canonized in 1920 (more on that soon!).

Joan of Arc was beatified by Pope Pius X in the Notre-Dame Cathedral in Paris in 1909. This meant that the Catholic Church recognized that Joan had entered into heaven and could be prayed to for guidance and aide. 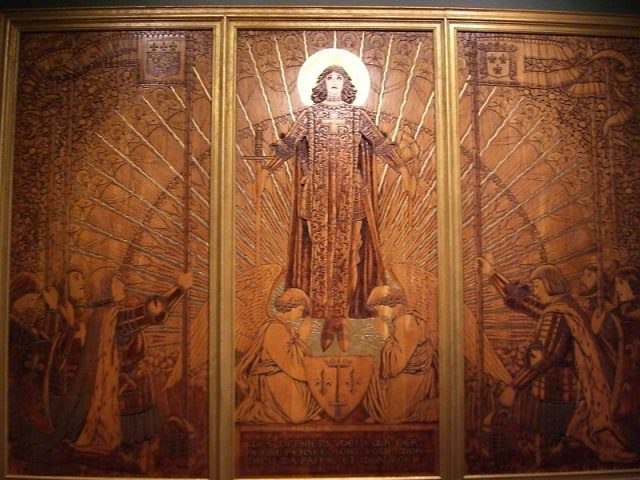 The Adoration of St. Joan of Arc by J. William Fosdick – by Andrew Kuchling on Flickr

As I’ve already mentioned, Joan of Arc was beatified in 1909 in Paris. Soon after, in 1920, she was canonized a saint by Pope Benedict XV.

Joan of Arc is one of the most deeply studied women of the Middle Ages. Because of her trial, there are several documents describing her story, and her unfortunate fate. Her retrial also provided several eye witness accounts of her death at the stake.

Since her death, Joan of Arc has risen to fame an a Catholic and French icon. As mentioned, she is the patron saint of France!

I hope that you all have learned a little bit more about Joan of Arc’s death after reading this article. It’s a sad story, but it deserves to be told. Joan is one of the most courageous figures in French history!

If you’d like to learn more about famous French personalities, I recommend that you check out our walking tours in Paris! Our local guides are history experts, and they’re sure to know even more about Joan of Arc and other figures like her! Click here to learn more and make your booking.