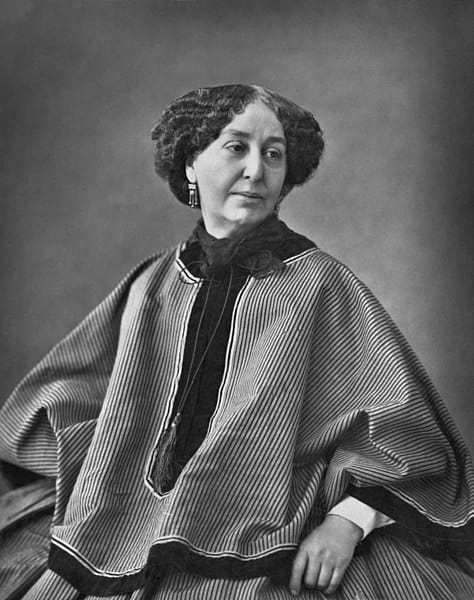 I know what you all must be thinking – a woman named George…say what?! Yes, ladies and gentlemen, French author George Sand was in fact no other than Amantine Lucile Aurore Dupin, or to her close family and friends, Aurore.

She is most famous for her novels, and was one of the most popular writers of her lifetime. She even beats out heavyweights like Victor Hugo and Honoré de Balzac during the mid 19th century as far as popularity goes.

George Sand wasn’t just popular for her time, she was an excellent writer at that. Sand is also known for questioning gender norms at the time, something that was pretty risky for the time period.

Are you interesting in learning more yet?! I hope so! Keep reading to find out how female writer George Sand changed Paris. 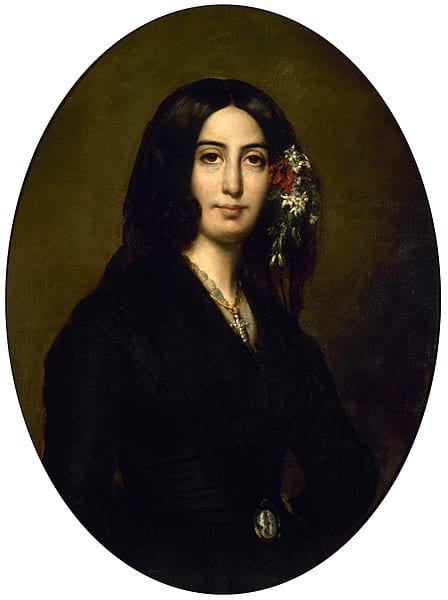 Sand was born in 1804 in Paris, but very soon after moved in with grandmother in Nohant, France, after her father passed away. She was then sent to a convent in 1817 where she lived until she married a man named Casimir Dudevant in 1822.

It seems that Sand was never made for married life, and after just 1 year of marriage began to look elsewhere for love and satisfaction. She soon began an affair with her neighbor.

In 1831, Sand left her husband and 2 children in Nohant and moved to Paris. Although she wasn’t officially separated from her husband until 1835, after moving to the capital, she soon began to have many affairs.

Sand was also one of the rare women of the 19th century that wore men’s clothing! In France at the time, if you were a woman that wanted to dress like a man, you were required to apply for a special permit.

Reasons for applying could range anywhere from health reasons to recreational reasons (it’s pretty difficult to ride a horse while wearing a skirt!). Sand ignored the fact that she needed a permit and dressed like a man anyways. She also smoked tobacco in public, something that no women at the time did.

As you can imagine, Sand received a lot of backlash for her choices. Women didn’t have many rights in the mid 19th century, and so it was shocking to see someone like Sand who just didn’t care about social and gender norms. However, Victor Hugo can be quoted as saying,

“George Sand cannot determine whether she is male or female. I entertain a high regard for all my colleagues, but it is not my place to decide whether she is my sister or my brother.” – Victor Hugo

Thankfully, she was accepted by some of her peers! 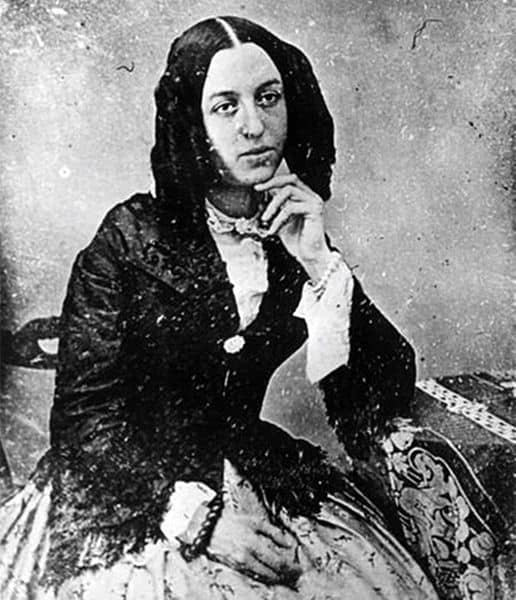 Not only did George Sand break all of the gender norms and stereotypes of her time, she was also an excellent writer. As I’ve already mentioned, in the 1830s and 1840s, her work was more in demand than that of Victor Hugo! And, she was only 27 years old at the time. Pretty impressive.

It was (and sometimes still is!) really rare for an author to experience so much success while still living. Sand specialized in what is called “rustic novels,” books that told stories of people living in the countryside and usually in poverty.

Some notable rustic novels by Sand are La Mare au diable, François le Champi, and La Petite Fadette. All three of these novels have similar themes, and one that Sand was very fond of: love triumphing over obstacles like class.

Before Sand began publishing novels under her pen name, she had her literary debut by working with author Jules Sandeau. The pair wrote articles together under the name of Jules Sand. I think we all know where she got the inspiration for her own pseudonym from! 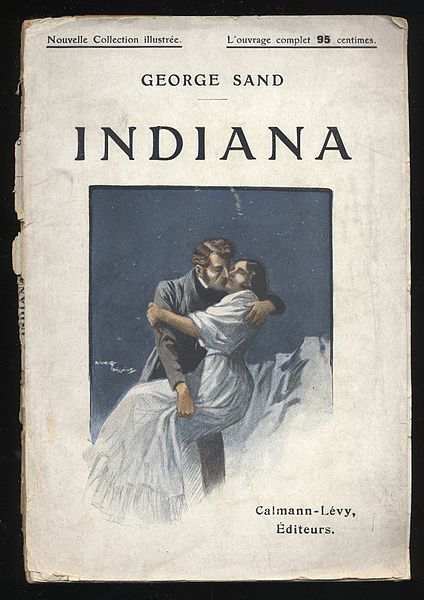 The cover of Indiana by George Sand – WikiCommons

The first novel she ever published under the name George Sand was called Indiana, which tells the story of a women unhappily married. Sound familiar? While Indiana is in no way autobiographical, its clear that Sand drew inspiration from her own unhappy marriage. Sand received recognition for this novel almost immediately after it was published.

She went on to publish several other novels in the next few years: Valentine and Lélia. In the 1850s, Sand began to write autobiographical pieces, like Histoire de ma vie (History of my Life in English) and Elle et Lui (about her relationship with Alfred de Musset). Journal Intime (Diary in English) was published after her death, in 1926. 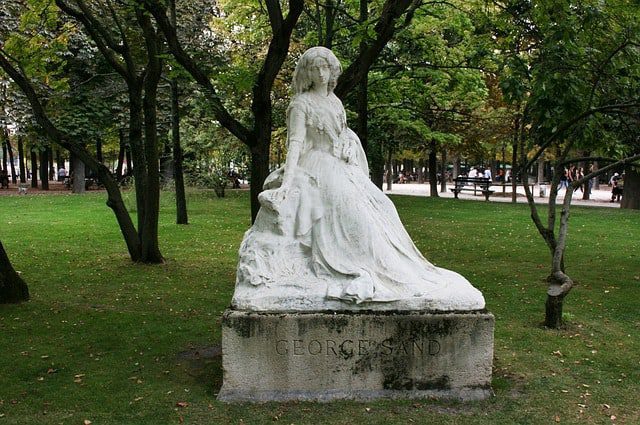 George Sand should and is recognized for her literary talent. But, I couldn’t write an article on Ms. Sand without mentioning a few of the famous relationships she had!

Alfred de Musset was a famous French playwright that Sand got involved with in 1833, and remained with until 1835. Sand was 7 years older than Musset, and he was known fo having a nervous and frail temperament. Legend has it that on a trip to Italy, after losing 10,000 francs to gambling, Musset fell ill. Sand called a local Italian doctor to help him, and she ended up leaving Musset for the doctor!

Sand’s relationship with the Polish-French composer Frédéric Chopin is probably her most famous. The pair were together for 10 years. Like many artists at the time, Chopin was very poor and sick, and tuberculosis from the very start of their relationship. After their relationship had ended, Sand published the novel Lucrezia Floriani, in which there is a sickly character that the public took for a caricature of Chopin. 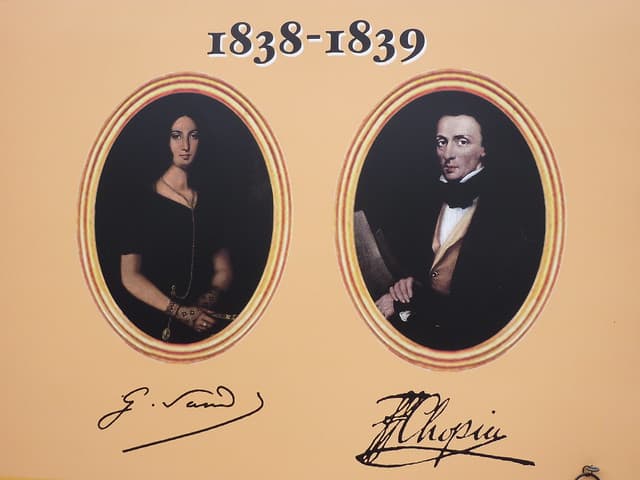 Sand denied having based her character on Chopin, but there was another incident that caused the pair to cut ties completely. Sand had a daughter named Solange, whom Chopin remained close with after his relationship with her mother had ended. Sand did not like this at all, and accessed Chopin as being in love with her daughter! When Chopin died soon after, Sand went so far as to refuse to attend his funeral.

The famous French writer, Gustave Flaubert and Sand did not have a romantic relationship, but I wanted to mention it here! Sand and Flaubert started writing letters to one another, and although they had very different personalities and writing styles, began a friendship. You can now read their correspondence if you check out the booksThe George Sand – Gustave Flaubert Letters and Flaubert-Sand: The Correspondence.

How did George Sand change Paris?

George Sand lived as she pleased, something that was very rare for women at the time. She dressed as a man without a permit, and was therefore given access to many places that women were not allowed. This enabled her to participate in politics and interesting conversation, and allowed her to form friendships with people she would have never met otherwise.

Sand also wrote and spoke out about her political views, something else that was frowned upon for women of her time. She wrote mostly in support of the poor and working class and women’s rights. She even started her own newspaper that was published in a worker’s co-op!

In the 1840s, Sand became actively involved in politics, and many politicians were known for coming to her for advice. In 1848, she was even a member of the provisional government before Napoléon’s coup d’état in 1851.

Sand died in 1876 in Nohant. You can’t visit her grave, as it is located in a private cemetery. In 2003, Sand once again caused controversy, when it was proposed that her body be moved into the Panthéon. In the end, it wasn’t moved, and remains in Nohant.

George Sand changed Paris with her novels, her political views and her unique version of feminism. Now that is a writer I can get behind!

I hope you’ve enjoyed learning more about the French author George Sand! She took her life into her own hands, which for a woman of her time was so rare. She went on to live a fascinating life at that!

My advice? Find a translation of any of her novels and you won’t be sorry. Better yet, if you speak French, check out the original version!

Do you want to learn more about French writers and authors? Why not hop on one of our walking tours with our local guides? They are sure to awe and amaze you with interesting facts on France and it’s famous citizens! Click here to learn more.