Christmas in Paris: What’s the Weather in Paris in December? 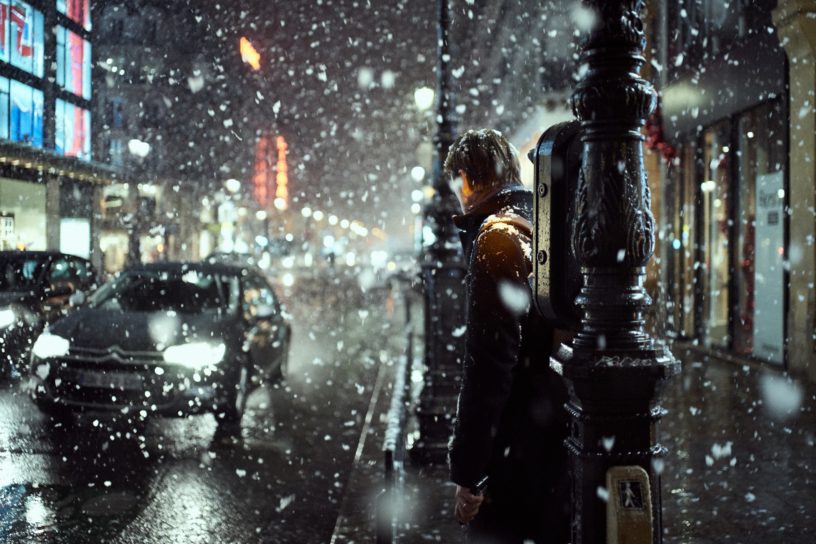 Christmas in Paris: What’s the Weather in Paris in December?

If you’re heading to Paris for Christmas you’re in for a chilly, but whimsical, treat.

For Parisians, Christmas spirit lies in the subtlety of delicate light displays around the city and Christmas markets here and there. They center this time of year strongly around food, especially shared dining, and also make the most of the outdoors in spite of the northern hemispheric climate.

So what can you really expect from a December in Paris? Here’s what I know. 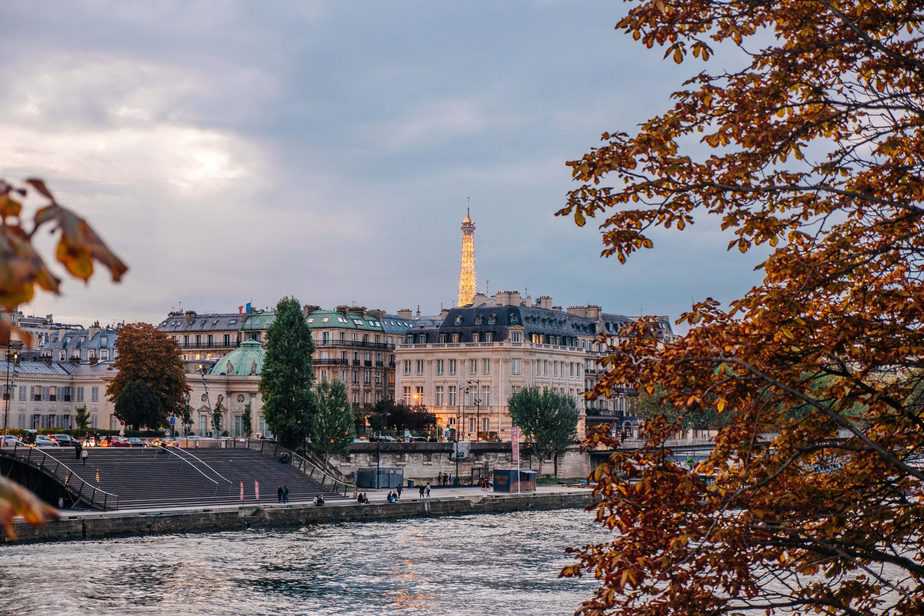 The last month of the year in the French capital brings rainy, icy weather.

December marks the end of Autumn and the official start of Winter in the northern hemisphere. Parisian Winters are by no means as harsh as those experienced across Eastern Europe, but they’re still nothing to take lightly.

In December, expect mostly cloudy days with regular rainfall and/or sleeting. Snow in Paris is rare, and on the odd occasion that it does fall from the sky, it generally lasts just a few minutes & melts on impact. 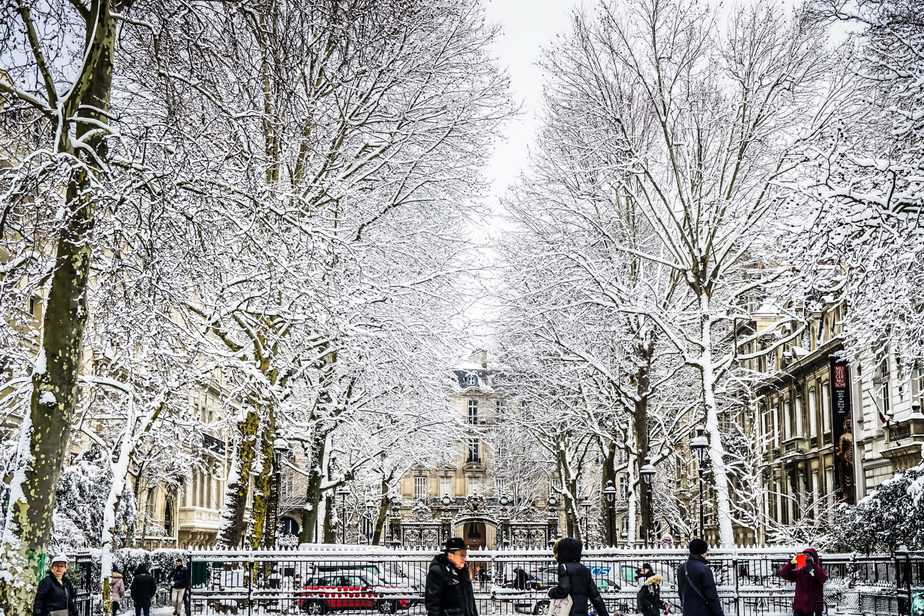 December isn’t all gloom, however. Paris is known for their “break days”; outbursts of sunlight and blue skies every so often, sometimes even lasting an entire day. The air will stay chilly, but feeling the Vitamin D on your skin for a few minutes is a welcome relief. 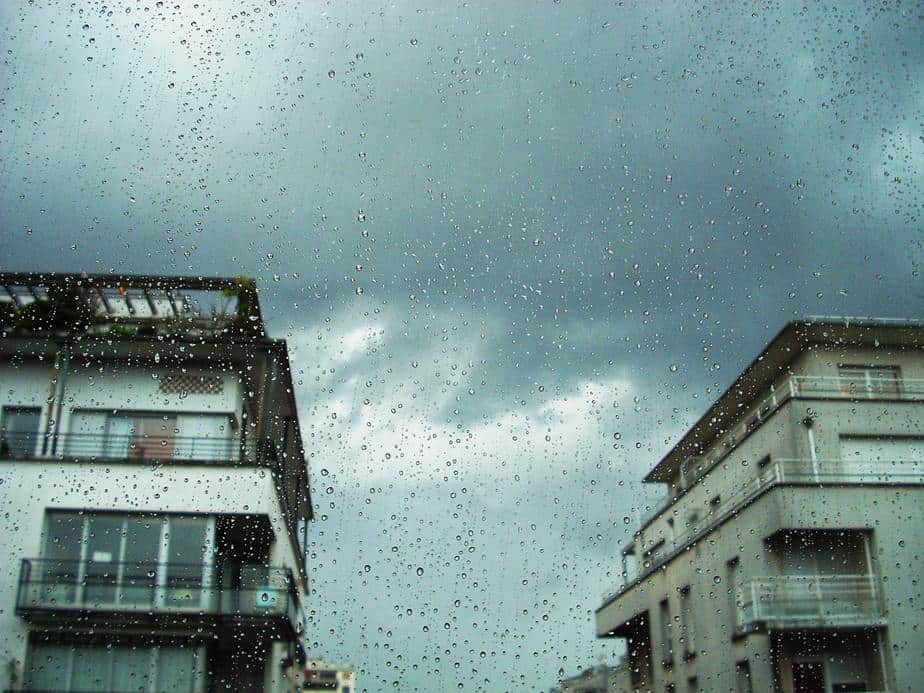 During the day, expect temperatures of between 6°C to 14°C. The highest recorded temperature in Paris during a December period was 17°C. Miracles do happen, guys.

Night time goes low, and one can expect temperatures of around 1°C on average. Early mornings have seen numbers below freezing, and Paris’ record low is -10°C. These numbers are unlikely, but with the current climate crisis anything is possible.

What to Pack for December in Paris

Packing for December in Paris is similar to packing for any other icy trip in Europe. Having lived through this cold a few times now, I have the following recommendations: 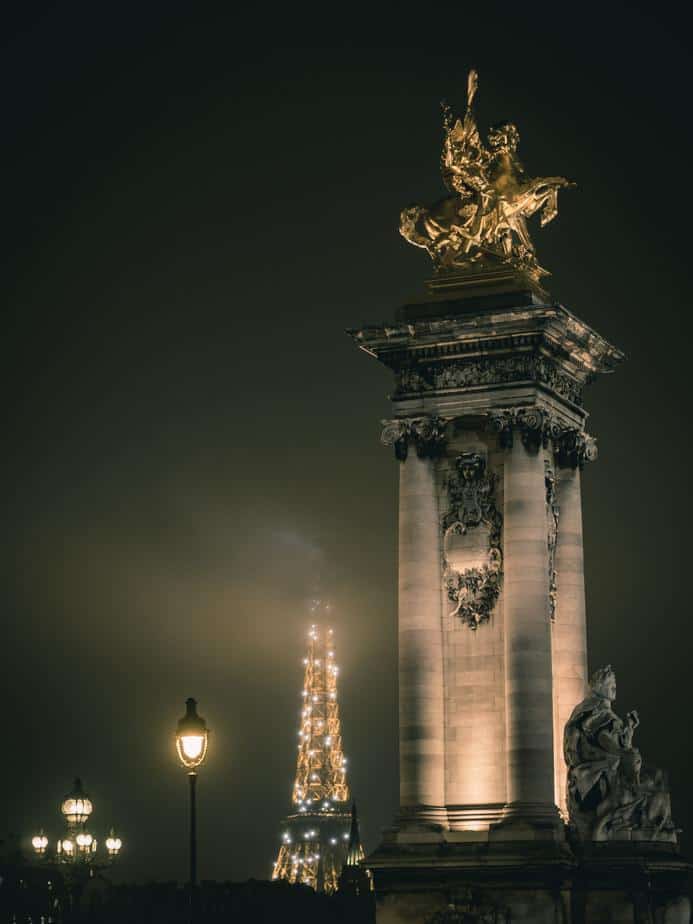 As mentioned, snow in Paris is rare, but the sleet and rainfall can result in some sludge-covered streets, and you’ll be grateful to have shoes to alternate with.

Waterproof shoes are preferable, and boots are great in these conditions as well. Avoid anything with a heel and, in the case of boots, make sure they have sufficient grip on the underside.

Or buy one when you get here! With an average of 14 days of rainfall you’ll be happy to have a compact umbrella to clip to your handbag/backpack as you mission through the city.

If you’re like me and you hate carrying things around for “just in case”, then consider investing in a quality waterproof windbreaker or rain coat.

I cannot stress this one enough.

Layers will save your life in Paris, especially on days when you’re sight seeing and moving between the indoors & outdoors a lot.

Bring heat sealed undergarments and thin base layers that can be easily removed if needed. Turtle neck vests come in handy for creating a barrier between your chest and the cold air.

Scarves are an underrated layering accessory, bring at least two!

Paris holds a lot of its chill in the concrete infrastructure that makes up most of the city center. You’ll feel a lot of the cold coming from the ground beneath your feet, and unsuitable shoes & socks will only cause you pain in the long run. Layer your toes! 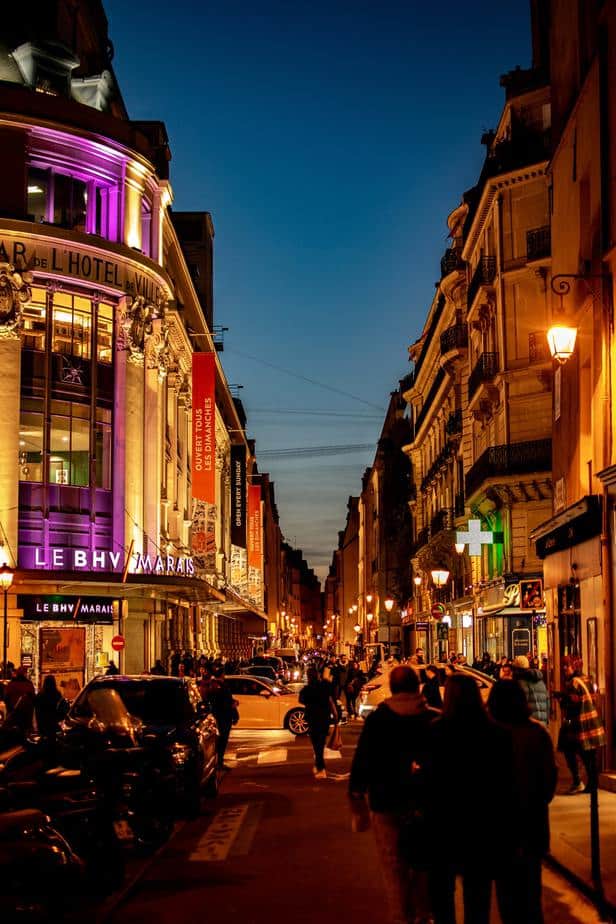 A good pair of gloves

Because I am president of the bad circulation club, my fingers and toes take a lot of strain in the Parisian winters.

A good pair of gloves is necessary for anyone making their way around the city streets on foot. Unfortunately, if you’re self-navigating you’ll have to be able to use your phone along the way.

Get yourself a pair of inexpensive, knit gloves from your nearest junk shop (we all know one). Cut the tips of the fingers off and create your own pair of fingerless gloves.

Wear these at all times underneath your full length gloves. They’ll save most of your hand when the top layer needs to come off to use a cellphone.

Because you’re in Paris! Why not?

Also, it will keep your head warm and hair dry to a surprising degree. Très chic! 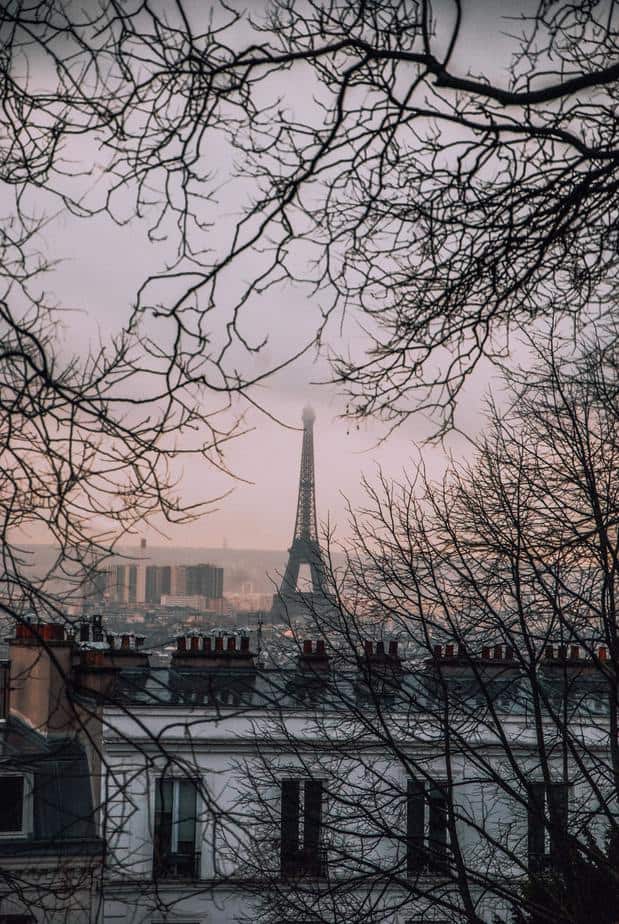 Christmas in Paris: What to Expect

As I said, Christmas time in Paris really gets people out and about in the city streets in spite of the cooler temperatures. There is a lot to see, do and eat during the month of December.

Ice skating is an activity not to be missed! There are rinks set up in various public squares and museums around the city. A great excursion for families traveling with kids!

The Christmas markets are a big deal during December, too. Most of Paris’ major neighborhoods will set up a market in the traditional style. Visit for hot spiced wine, handmade toys and all the French Christmas foods you can eat. Click here for more information on these. 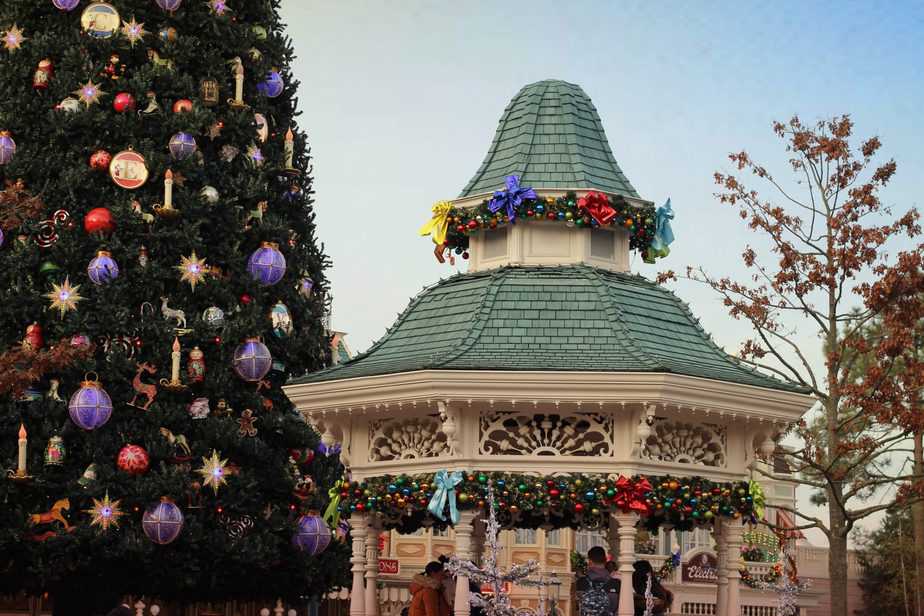 The holiday lights are usually set up around Paris from mid November, and are open for viewing through until January. The lights on the Champs-Elysées are world famous, and attract thousands of travelers annually.

As you make your way around town uncovering all the Christmas delights that the city holds, you’ll probably stumble across some carol singers and impromptu concerts as well. Christmas in Paris holds endless possibilities. 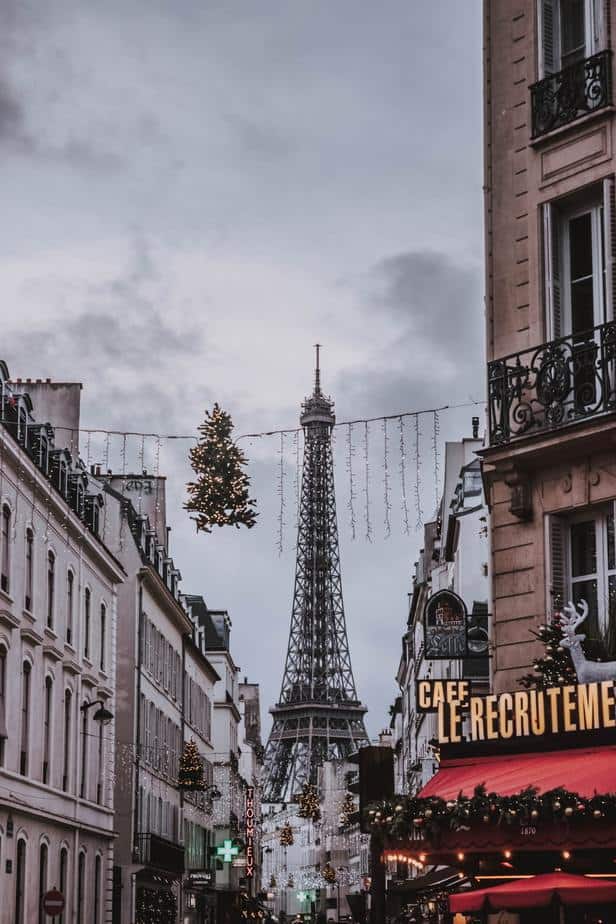 One final thing to note: The free guided walking tours of Paris don’t come to a halt during the month of December. You’ll still be able to explore your favorite arrondissements from street level with the help of a professional guide. Book today!