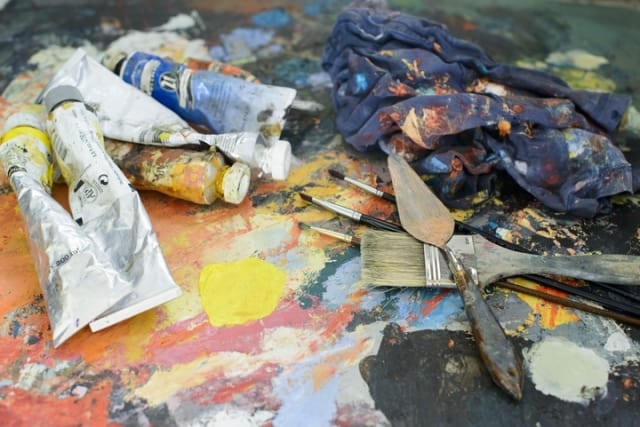 France has brought the world many good things: croissants, baguettes, the Eiffel Tower, the Côte d’Azur…and of course, art! The worlds most visited museum, the Louvre, isn’t in Paris for nothing! Plus, about 65% of the artwork housed there is by French artists. Vive la France!

There are countless incredible French artists that we can all learn from, but today, I will be focusing on a handful. Keep reading for the biggest and best lessons learnt from 6 French artists! 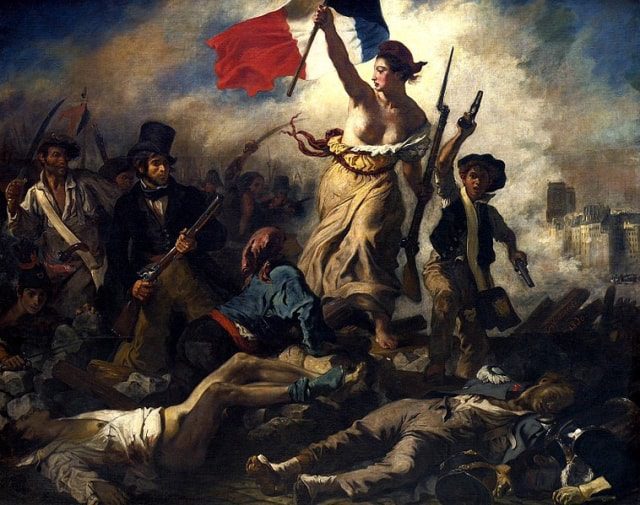 When Delacroix was in his twenties, he submitted his first painting to the Salon of 1882. The painting was inspired by Dante’s Inferno, and is called Dante and Virgil in Hell. Today, you can see this work of art in the Louvre.

You may recognize his name, thanks to his masterpiece, Liberty Leading the People! The massive painting is also housed in the Louvre, and it depicts Liberty, in the form of a woman (Marianne, the personification of France, to be exact), leading an army towards freedom. Delacroix painted it to honor the 1830 Revolution in France.

Eugène Delacroix teaches us how important it is to work towards, and cherish freedom.

Practical Information for visiting the Louvre:

Entry fee: Tickets can be purchased online for 17 euros, and for 15 euros at the museum.

The Dance Lesson by Edgar Degas

French painter Edgar Degas is considered to be one of the founding fathers of the Impressionist movement. He was born in 1834 in Paris, and was known for his portrayals of everyday Parisian life. Swoon!

Impressionist art, or Impressionism, is called as such because the artists that began the movement were known for painting their impressions of the world around them, instead of really realistic portrayals. These artists usually preferred to paint outside, as they had an obsession with light and how to depict it.

Degas was really into painting women, and he usually found his subjects in cabaret performers, prostitutes and ballet dancers. Degas also used a lot of different materials for his work such as oil, pastel, wax, etching and even photography in his later pieces.

Edgar Degas teaches us to appreciate the female form, and to follow our passion to create something new, like the Impressionist art movement! 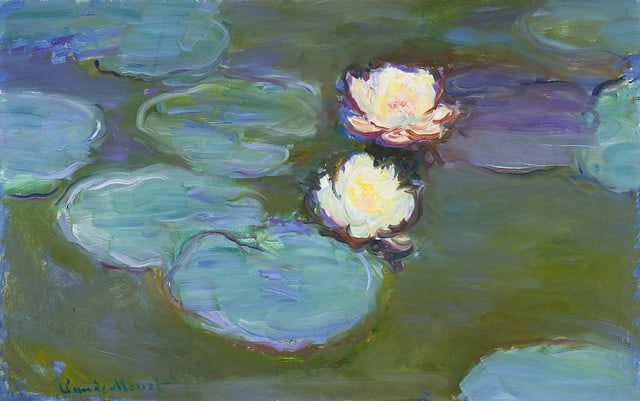 Claude Monet is also a very prominent figure in the Impressionist art movement, and is probably the most recognizable! Although there were many others involved in the movement, like Degas, Monet was the most consistent Impressionist artist. Is a little something called the Water Lilies ringing any bells?! If you’re in Paris, head to the Musée de l’Orangerie to see them for yourselves, and see what Impressionism is really all about.

Not only is Monet a celebrated French artist, he could be considered one of the most famous artists of all time! Even if you’re not that interested in art, chances are you’ve heard the name Monet once or twice.

Monet was born in 1840 in Paris, but lived out the better half of his days in his home in Giverny. His house and the gardens surrounding it are now a museum, where you can see where Monet found his inspiration to paint the Water Lilies series. I’ve been there 3 times now and I would go a dozen more times! It’s such a lovely way to spend a day.

Claude Monet teaches us that there is beauty in nature, and we have the freedom to depict it in whichever way we see fit. 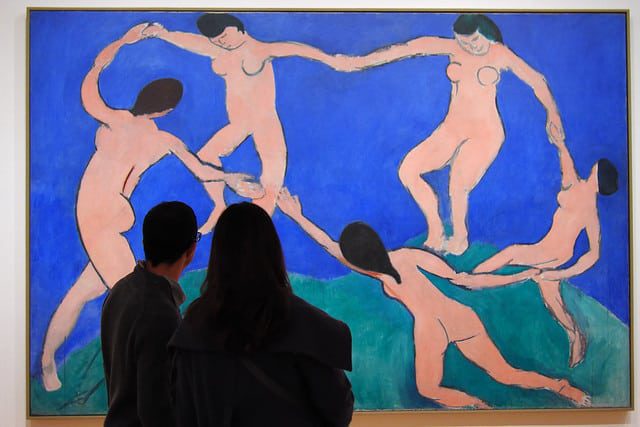 Henri Matisse was born in 1869 in Picardy, France. He is known as one of the most important French painters of the 20th century, thanks to his involvement in the Fauvist movement. The movement was short lived, but it is a well loved movement nonetheless! Matisse loved to paint using bright colors, and his representations of emotion were revolutionary for the time.

Matisse’s major breakthrough came in the South of France in 1904-1905. The painter worked on two tableaux while he was there, and submitted them to the Salon d’Automne exhibition in Paris in 1905. One critic praised him for his use of color and abstract representations of the human form, playfully calling the people depicted “fauves,” meaning wild beasts in English! And so, Fauvism was born.

My favorite place to appreciate Matisse in Paris? The Musée d’Art Moderne de la Ville de Paris, or the Modern Art Museum in English! There is an entire room dedicated to Matisse at the museum, appropriately called the Matisse Room. Here, you’ll see the two enormous paintings, The Unfinished Dance and The Dance of Paris. Try to head to the museum just before it closes, or just after it opens. It’s really special to be one of the only people in the room, soaking up Matisse’s work.

Henri Matisse teaches us to live unabashedly and colorfully.

Practical Information for visiting the Modern Museum of Art:

Entry fee: Free admission to the permanent collection. Between 5-12 euros for special exhibitions. 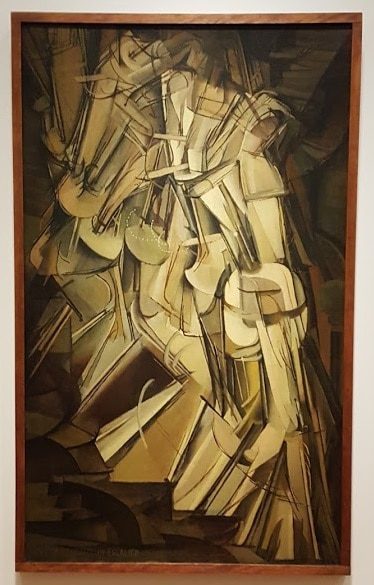 Nude Descending a Staircase, No. 2 by Marcel Duchamp – Flickr

Duchamp was no stranger to controversy, and his first piece that turned heads was entitled Nude Descending a Staircase, No. 2. While it may not look that controversial to our modern eyes, at the time, it caused quite the stir!

Duchamp is most famous for the urinal entitled Fountain that he submitted to the prestigious Society of Independent Artists exhibit. Duchamp was one of the founders of the society, but decided to submit the piece under the name of R. Mutt. He was quickly denied entry into the exhibit, proving that the Parisian art world was filled with snobs that were only concerned with having big name artists at their exhibitions.

Marcel Duchamp teaches us to be ourselves, and to not be afraid to be different. 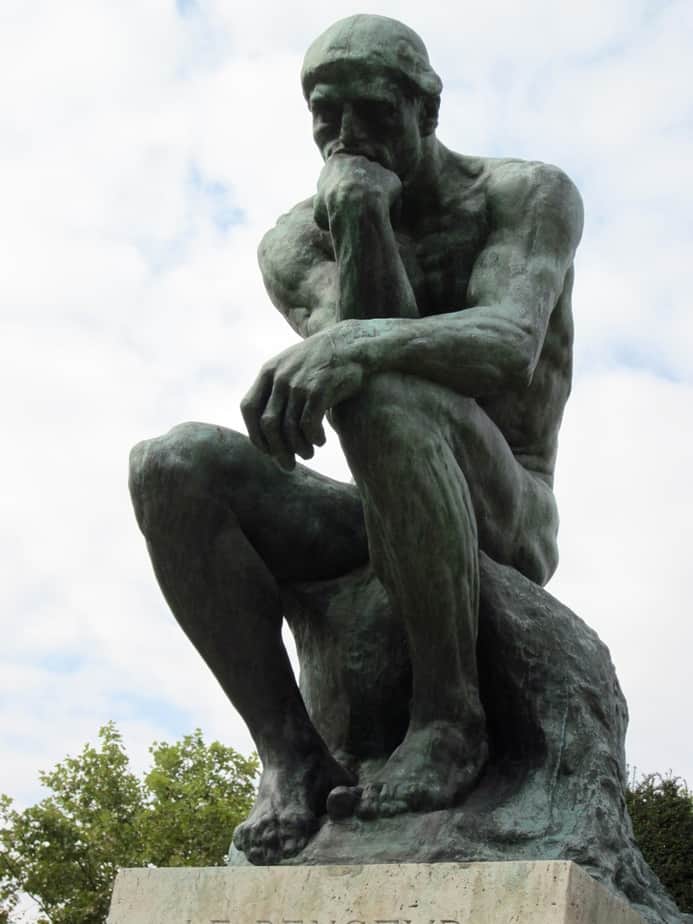 After all of these painters, I’m sure you all are ready for something a little bit different. Enter: Auguste Rodin, celebrated French sculptor. If you’re in Paris, lucky for you there is an entire museum dedicated to Rodin’s works! And it also happens to be one of my favorite museums in the city.

Rodin was born in 1840 in Paris, where he lived for most of his life. When he was young, he always had an interest in the arts. He decided to apply to the Paris School of Fine Arts (The École des Beaux-Arts), in the hopes of studying painting and sculpture. Rodin took the entrance exam three time, and was rejected every single time!

Rodin never let this rejection let him down, and he decided to pursue sculpture anyways. After working as an architect in Brussels for a few years, Rodin traveled through Italy with the hope of being inspired. He found what he was looking for in the works of Michelangelo and Donatello, and returned to Paris to continue his trade.

Rodin’s sculptures are centred around the human form, romance and beauty. He worked with bronze, marble and wood, too name a few materials!

Auguste Rodin teaches us to embrace relationships and to keep working towards your dreams no matter what.

Did you learn a little something from these French artists? I hope so! There are lessons to be learned everywhere if you look hard enough, so do the right thing and read a Discover Walks blog everyday!

Another way you can learn? By going on a Discover Walks walking tour! We have plenty of options to choose from, click here to see which interest you!