A Walk in Ile Saint-Louis 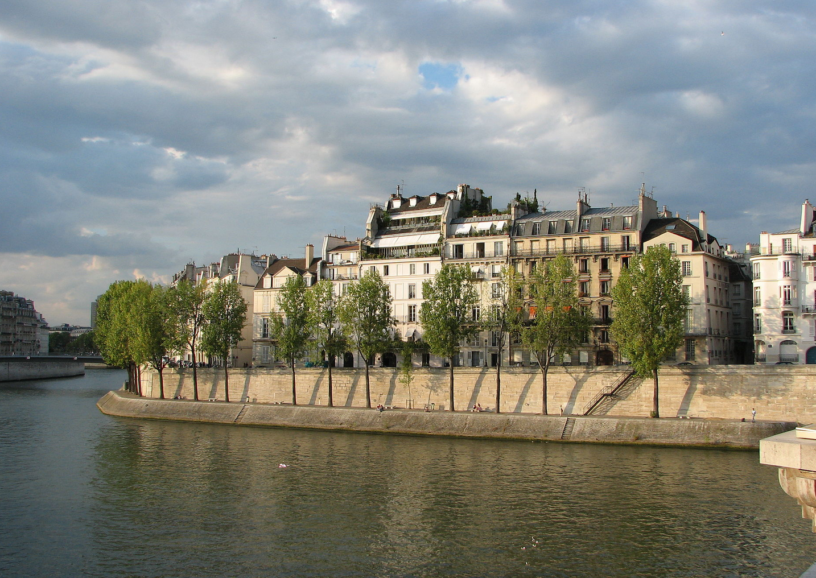 Photo by Milvus on Wikimedia Commons

A Walk in Ile Saint-Louis

A Bit of History about Ile Saint-Louis 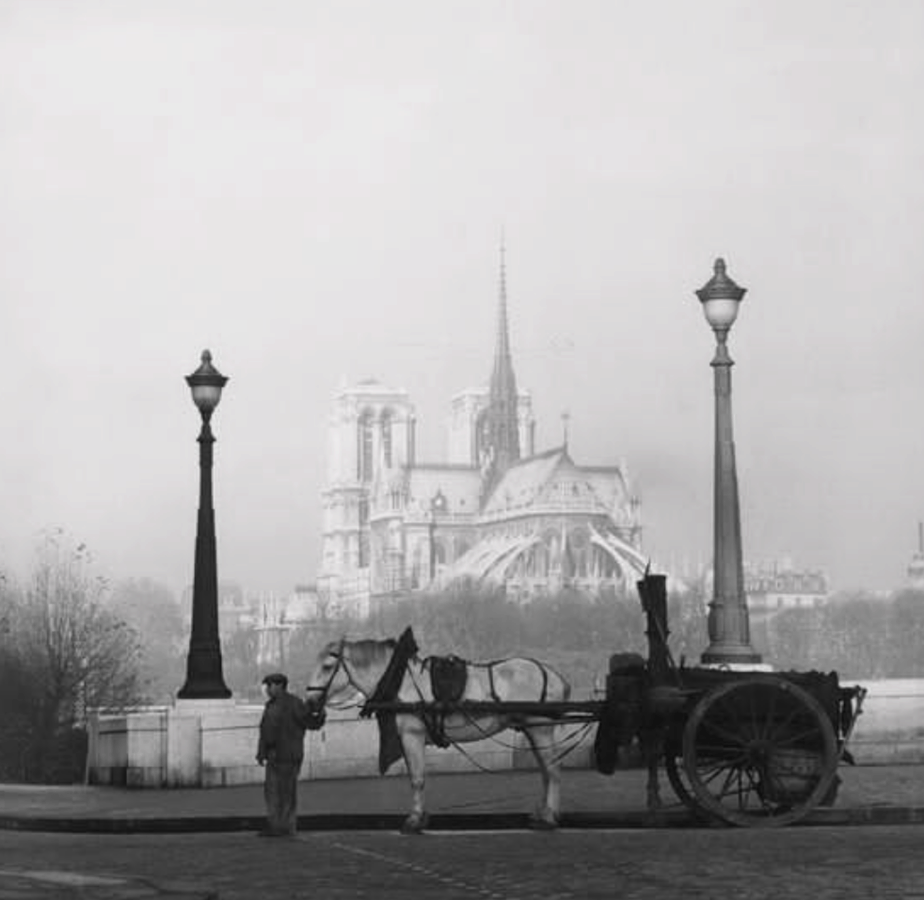 Before you start out on a walk in the Ile Saint-Louis, here’s a little bit of history about the area.

Although you wouldn’t know it today, the area that is now one of the most classic quartiers  in Paris was originally farmland. Just next to Notre-Dame’s home on neighboring Ile de la Cité, the Ile Saint-Louis was actually mostly cattle pastures and fields until the 1800s. During the 18th century, the area was one of the area’s best producer’s of vegetables, meat and dairy products.

Before becoming the picturesque, mostly touristic area it is today, the Ile Saint-Louis was the heart of Parisian agriculture and commerce. Today, the island is more populated, though since Ile Saint-Louis missed the Haussmanian expansion witnessed in most other Parisian areas, so it still has managed to retain its village-like charm.

Many merchants like the butcher as well as the fromagerie have been around for decades and kept their original storefronts. Plus, the local cafés like the Saint- Regis and of course, Berthillon ice creams are worth a try as well.  You’ll only find one-way cobblestone streets on the island, and you can also walk along the riverbanks which stretch all the way around the Ile.

Walk along the Riverbanks on the Ile Saint-Louis 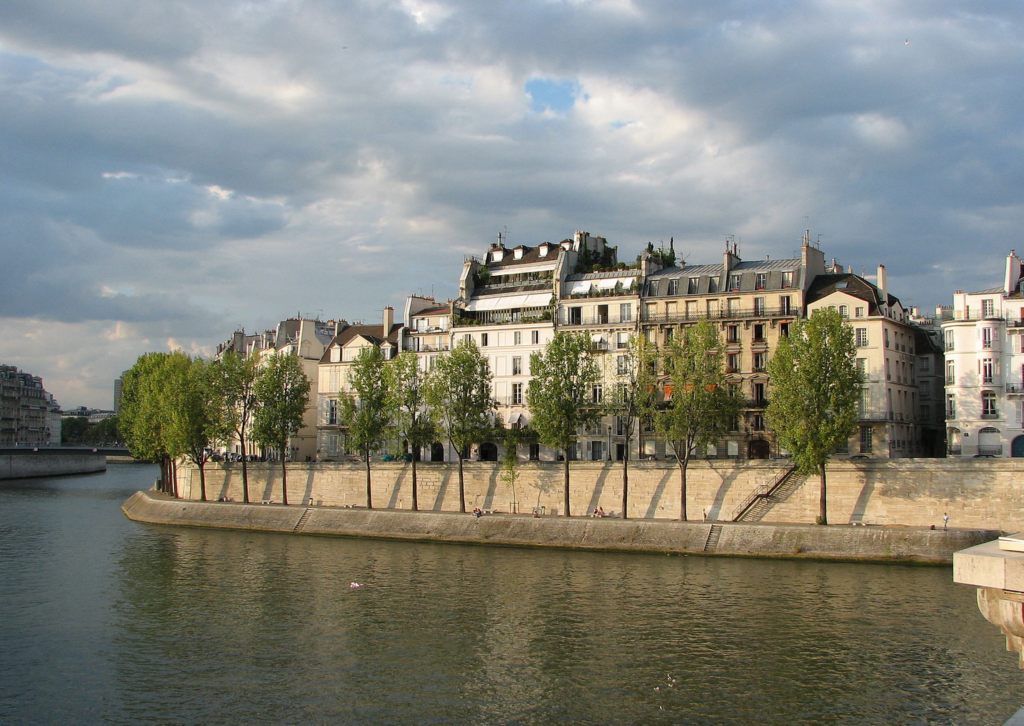 Photo by Milvus on Wikimedia Commons

My first suggestion for a great walk in Ile Saint-Louis is to take a stroll along the riverbanks. Just head down the steps on either side of the island’s three bridges to the cobblestone riverbanks.

So in my opinion walking along the banks of the Seine is one of the best ways to explore the area. Walking around the entire Ile Saint-Louis will take you less than an hour as it’s quite small. But you can enjoy a view of monuments like the Pantheon, Notre-Dame, and Hotel de Ville, all from the island’s riverbanks.

I suggest you start your walk from the Pont Saint-Louis, which connects the island to neighboring Ile de la Cité. Here, you can access the quai and start off on your walk. Just make sure to wear some comfortable walking shoes, as the cobblestones are charming yet tough on the feet. 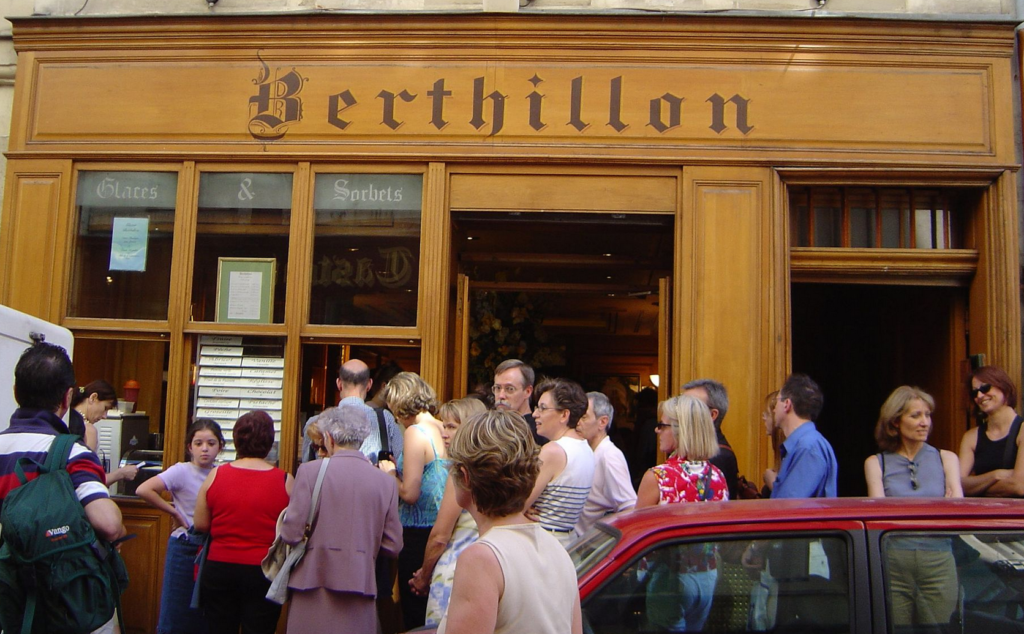 Berthillon is a family-run ice cream parlor on the Ile Saint-Louis, and a true Parisian institution. The place has been around since the 1950’s, and still has their original shop on the island’s main drag, Rue Saint-Louis. Today, their ice cream is sold all over Ile Saint-Louis and all over France as well!

They became famous for their expansive choice in flavors. You can choose from over fifty flavors in sorbets (vegan/gluten-free friendly) or classic ice creams! They range from classics like salted caramel and chocolate to more unexpected flavors like pear or even rose. 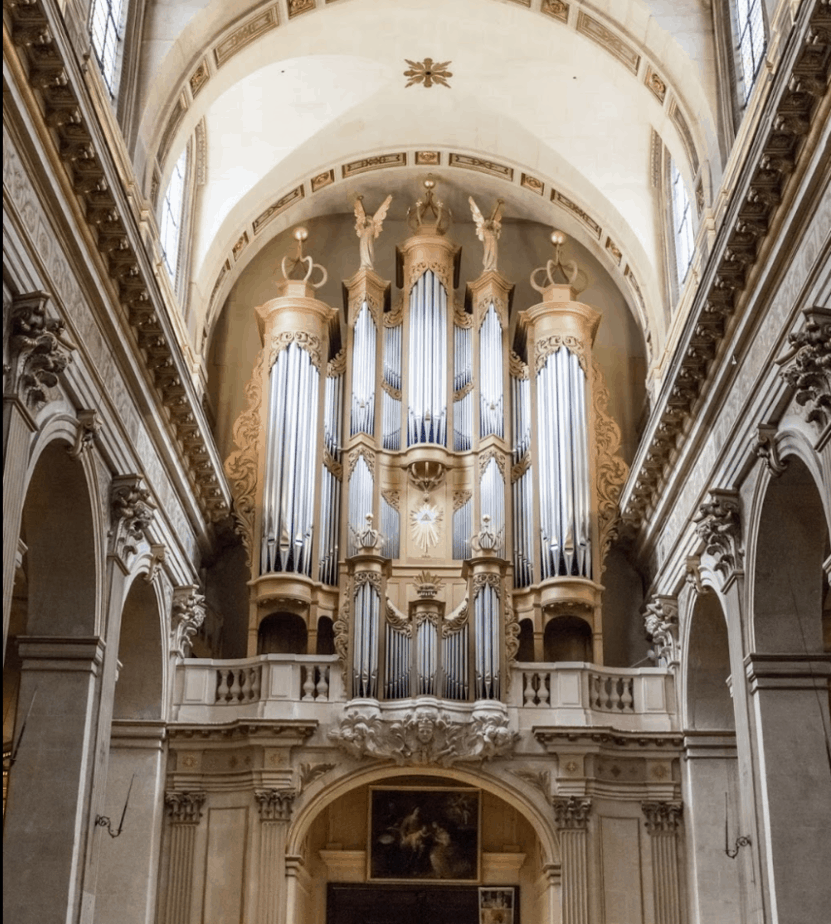 During a walk on the Ile Saint-Louis, the Baroque style Saint-Louis en Ile Cathedral  one of the most impressive monuments to see. If you don’t know what to look for, the church can easily be missed. However, it is free to visit. And I think you’ll agree that it’s worth it.

The cathedral was constructed in 1729 and took over fifty years to complete. Its’ classic Baroque style is evidenced in the beautiful stained glass windows and ornate fixtures. In my opinion, the best time for a walk on the Ile Saint-Louis is either just after sunrise or just before sunset. This time of day, the light plays so beautifully off of the ancient limestone buildings on the island, and is especially pretty streaming through the cathedral windows.

Shop at the Local Stores

One of the great things about the Ile Saint-Louis is that despite an influx of tourists, the island has managed to maintain some pretty authentic commerce. Since the island is so small, it’s the perfect place for wandering around and doing some window shopping at the very least.

As I mentioned earlier, there are plenty of authentic boutiques selling a bit of everything you can imagine in terms of food and souvenirs. On the Ile Saint-Louis, you’ll find two book shops, several cafés, a hotel, and a handful of souvenir shops and art galleries as well.

In terms of food, the offerings are quite extensive. There is a shop specifically dedicated to French olive oil, and another focusing on serving up some of the best Southwestern products like foie gras in the middle of Paris. Green grocers, bakeries, cheese shops and butchers also line the island’s several streets; perfect for grabbing some tasty snacks for a picnic.

Enjoy a Picnic in the Square Barye 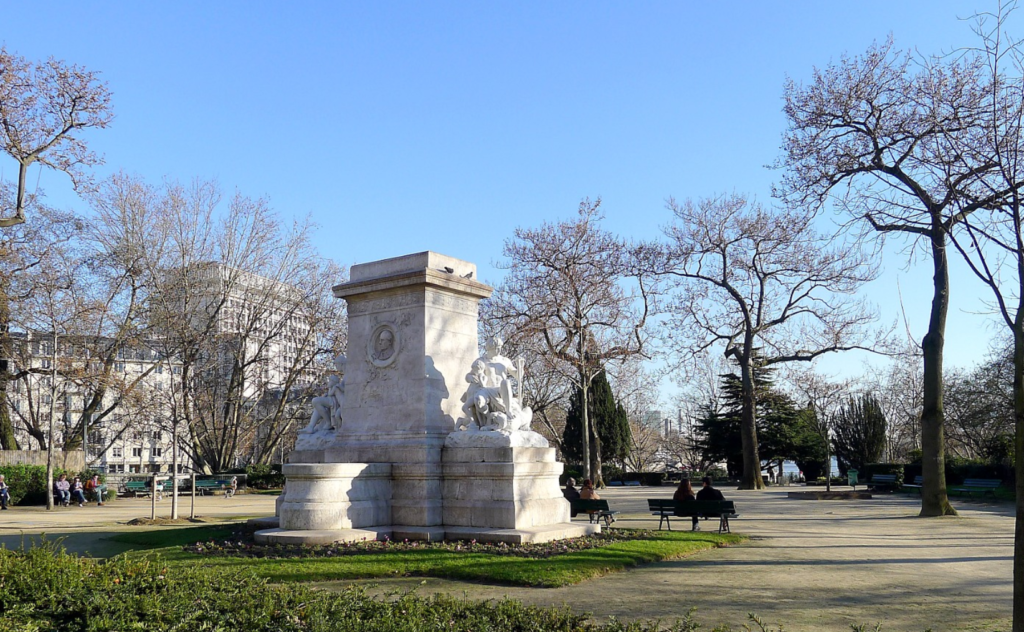 This quaint little square is located on the Eastern end of the island, and makes a great resting point during a walk on the Ile Saint-Louis. This two-level park overlooks the Seine and is full of greenery. Plus, various willow, cherry and chestnut trees surround the few picnic benches in the the Sqaure Barye – making for an excellent picnic spot.

After shopping at the various merchants on the Ile Saint-Louis, why not come to this park to enjoy your finds in a picnic? Insider tip: this park is especially beautiful in spring time, when the many cherry and magnolia trees are in bloom! To get there, simply head to the park just next to the Pont de Sully. You can’t miss it.

Well, now you know how to spend an afternoon walk in Ile Saint-Louis. But where should you go from here? One of the best aspects of walking in the Ile Saint Louis is that its so central – you’re in  a great jumping off point to explore the rest of the city! Plus, as Ile de la Cité is located just a few minute’s walk from Notre-Dame Cathedral, the Marais, and the historic Latin Quarter.

Where to go after a Walk in Ile Saint-Louis

Now that you’ve finished your leisurely stroll on Paris’ most picturesque island, how about exploring some of the surrounding areas? 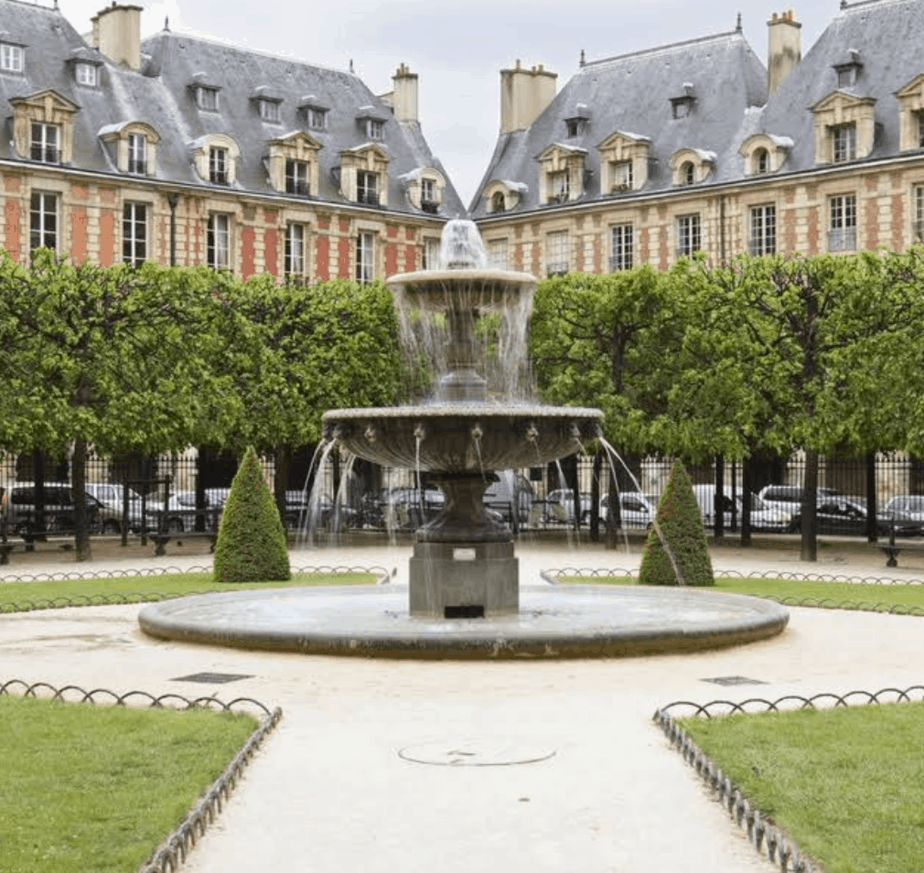 Due it’s close proximity, the Marais is one of the top areas to discover after a walk in Ile Saint Louis. The Marais actually means marsh in French and historically, this neighborhood was once sinking wetlands right in the middle of Paris.

Today, the Marais is known for its up and coming eateries, cool vibe and artistic soul; as well as for being the epicenter of Paris’ Jewish and LGBTQ+ communities. This neighborhood comprises the 3rd and 4th arrondissements in Paris, and stretches from the Seine riverbanks at Hotel de Ville until République in the North.

There’s a ton to see and do in le Marais, from shopping to dining to museum-hopping. This area is home to plenty of museums like Centre Pompidou as well as parks like Place des Vosges and some of the city’s best restaurants. Come and join our guided walking tour of the Marais to learn all about this incredible neighborhood and its history! 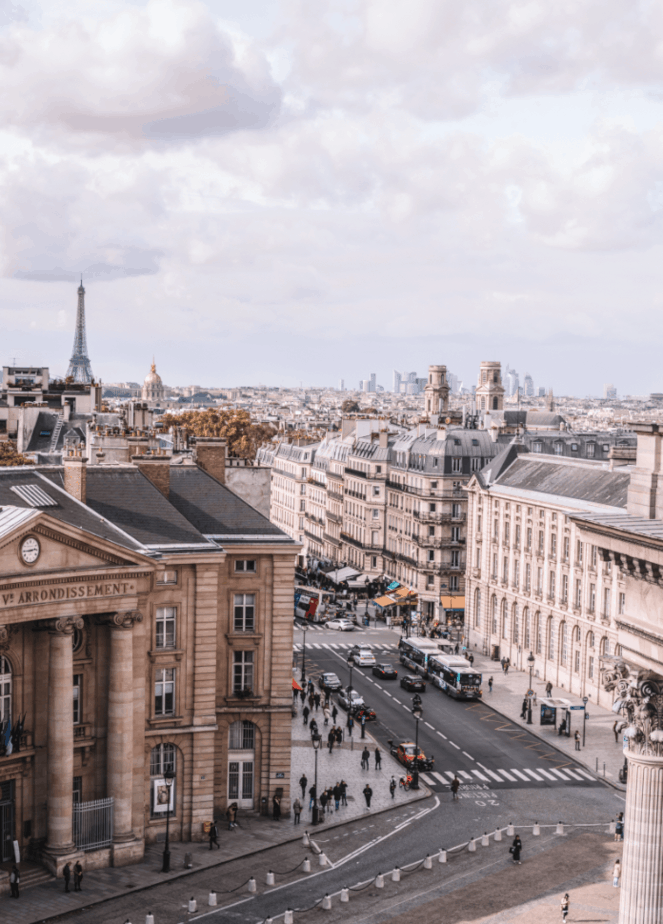 Still wondering what else should you see after a walk in Ile Saint-Louis? The Latin Quarter is just across the river via the Pont de la Tournelle. Comprising the 5th arrondissement and some of the oldest Medieval streets in Paris, the Latin Quarter is definitely a must-see neighborhood.

Full of history and charm, the winding cobblestone streets of the Latin Quarter will entertain you for hours. You can visit places like the Pantheon, Jardin du Luxembourg, the Sorbonne university and the classic Shakespeare and Co. bookstore. And if you want to know more about this part of Paris, come along on our guided tour of the Latin Quarter!

Well, now you have a guide to a walk in Ile Saint-Louis and some ideas of where to continue exploring afterwards! I hope you’ve enjoyed this article and will have a great time strolling all over the Ile Saint-Louis.