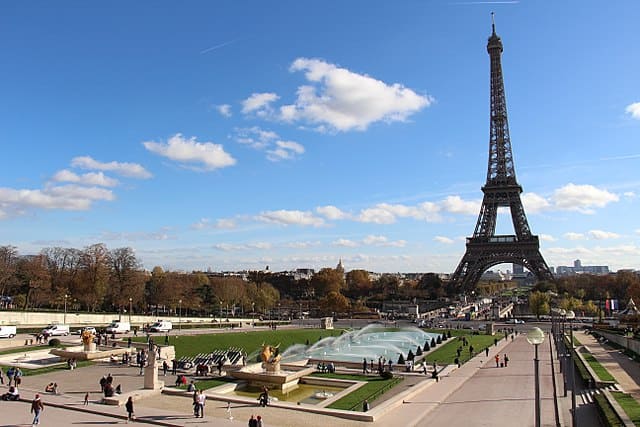 Trocadero Garden and the Eiffel Tower by Fred Romero - WikiCommons

Although Paris is a pretty compact city, there are plenty of green spaces to enjoy as well. From postage-stamp-sized gardens to larger parks to full-on forests, if you want to get a taste of nature after you’ve spent the morning in a museum, the choice is yours!

Both places are great for exploring and relaxing on a lazy day. Keep reading for a quick history of the Trocadero and Champ de Mars in Paris!

The Champ de Mars: from agriculture to the World’s Fair 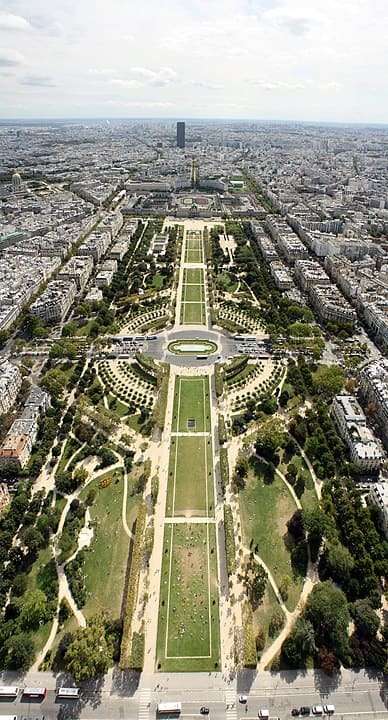 View from the top level of the Eiffel Tower of the Champ de Mars. The Tour Montparnasse (Montparnasse Tower) and the École Militaire can be seen in the distance. By Mattgirling – WikiCommons

Let’s talk about the history of the Champ de Mars first. The Champ de Mars is named after the Roman god of war, Campus Martius (Mars Field) as a nod to the fact that the French military once used the grounds for training purposes. If you know your Paris geography, you know that the École Militaire (Military School) is located at one end of the large garden! When the school was built in 1765, the Champ de Mars began to take the shape that it still has today.

Before the school was built, the area was used for agricultural purposes. It used to be called Grenelle (again, my Paris experts will recognize this as the name of a metro station, not too far from the Champ de Mars), and farmers would claim small plots in order to grow fruits and vegetables for the local market. This didn’t last long, however, as the ground wasn’t fertile enough to support the growing enterprise.

Fast forward to the French Revolution of 1789. In 1790, the Champ de Mars was turned into a festival ground to celebrate the first “Federation Day,” to commemorate the storming of the Bastille prison the year before. Federation Day is now known as Bastille Day!

But, the French Revolution was a tumultuous and violent time. On July 17 the following year, a bloody battle took place which would be known as the Champ de Mars Massacre. The first mayor of Paris, Jean Sylvain Bailly, also lost his life there in 1793 by the guillotine. 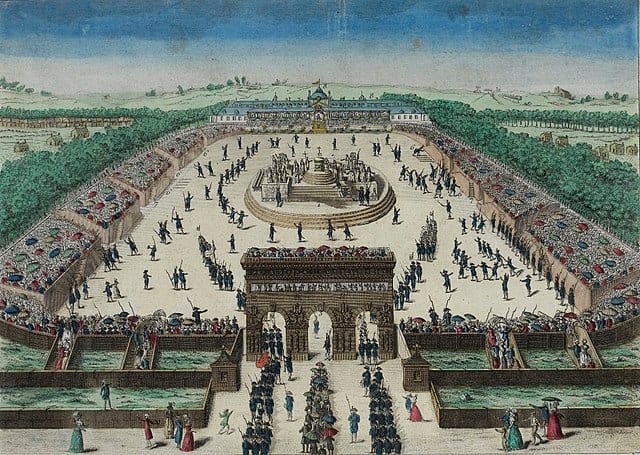 During the Hundred Days war, Napoleon Bonaparte held a ceremony on the Champ de Mars called the Champ de Mai. At the ceremony, Napoleon promised to uphold the Charter of 1815, which allowed Napoleon to amend the previous constitutions.

In the later 19th century, the Champ de Mars became home to several World’s Fairs (Expositions Universelles). The international exhibition was designed to showcase the latest innovations from around the world. So many of Paris ‘ monuments are products of the World’s Fair, such as the Eiffel Tower, Grand Palais, Petit Palais, and the Pont Alexandre III. The Champ de Mars hosted the exhibition in 1867, 1878, 1889, 1900, and 1937.

The Trocadero Palace in 1900 – WikiCommons

Next, onto the quick history of the green space on the other side of the Seine River, Trocadero. The Trocadero is the home to the Palais de Chaillot, an old palace that now houses several museums. It is also home to the Trocadero Garden, that outdoor area I keep mentioning!

Trocadero gets its name from a battle that took place in Spain in 1823. French forces led by the future king of France, Charles X took control of an island called the Isla del Trocadero, and to honor the future monarch, the place was named after him. It stuck!

The area where Trocadero is was once called Chaillot (hence the name of the palace!), and construction began to improve it in preparation for the World’s Fair of 1867. Over a decade later, for the 1878 World’s Fair, the Trocadero Palace was built as a meeting place for international officials at the exhibition. 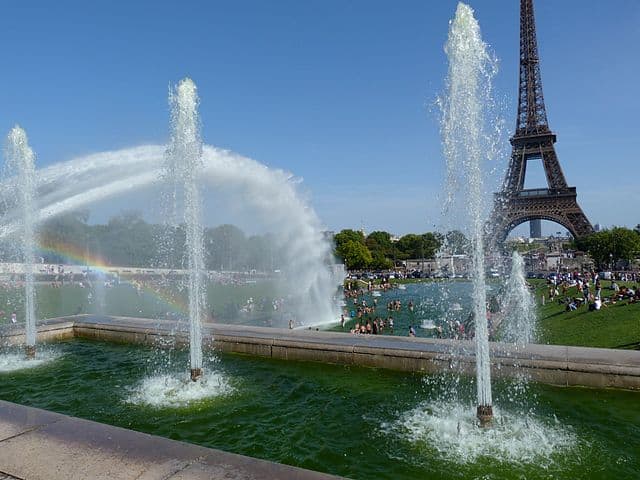 The fountains in the Trocadero Garden by Siren-Com – WikiCommons

The palace no longer exists today as it was knocked down in preparation for the 1937 Exposition Internationale (International Exposition). French innovators decided to construct a brand new palace to impress the rest of the world, dubbing it the Palais de Chaillot as a nod to the former name of the area. Today, you’ll find museums like the Musée de l’Homme (Museum of Mankind) and the Musée national de la Marine (Naval Museum) inside the palace.

The Trocadero Garden was also created for the Exposition Internationale of 1937 and still stands today. The entire area was once the gardens of the original Trocadero Palace that were torn down in 1936. If you’re interested in a morbid fun fact, at the 1937 Exposition, the Nazi Germany Pavillion overlooked the garden.

Today you can wander the gardens at your leisure. There are several large fountains that are great for sitting next to when the weather gets too hot, and the view is hard to beat. If you want to avoid the sometimes overcrowded Champ de Mars, you may want to scope out the Trocadero Garden first!

Now that you know a little bit more about the history of the Champ de Mars and Trocadero, it’s time for you to visit them yourselves! As soon as the weather gets nice, many people flock to these green spaces to admire the Seine River and the Eiffel Tower. It’s the perfect place to picnic in the summertime.

If you want to learn more about the history of Paris, why not join one of our local guides on a tour around the city? Click here to learn more and make a booking.