8 of the Coolest Record Stores in Paris 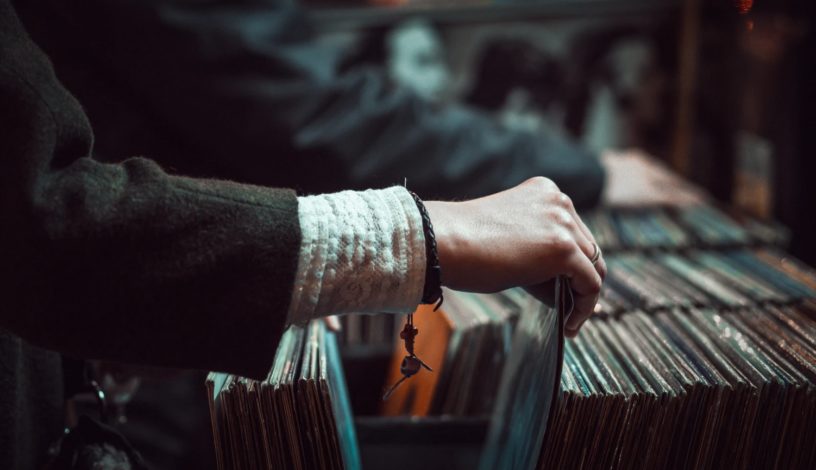 By Edu Grande on Unsplash

8 of the Coolest Record Stores in Paris

Are you the kind of person who believes everything sounds better on vinyl? Well, whether you’re a seasoned vinyl collector, a bargain hunter or just getting into the game, Paris is an excellent city in which to do your shopping. Here’s a guide to 8 of the coolest record stores in Paris! 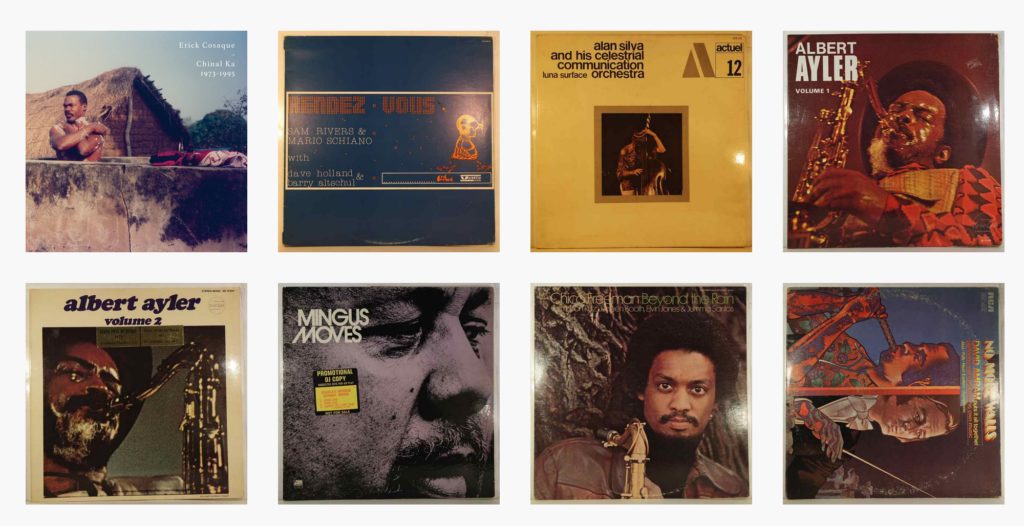 Superfly caters to lovers of jazz, Latin, African and soul music, and they specialize in rare and collectible discs from these genres. They also have their own record label and radio station, which feature some more obscure, up and coming artists. 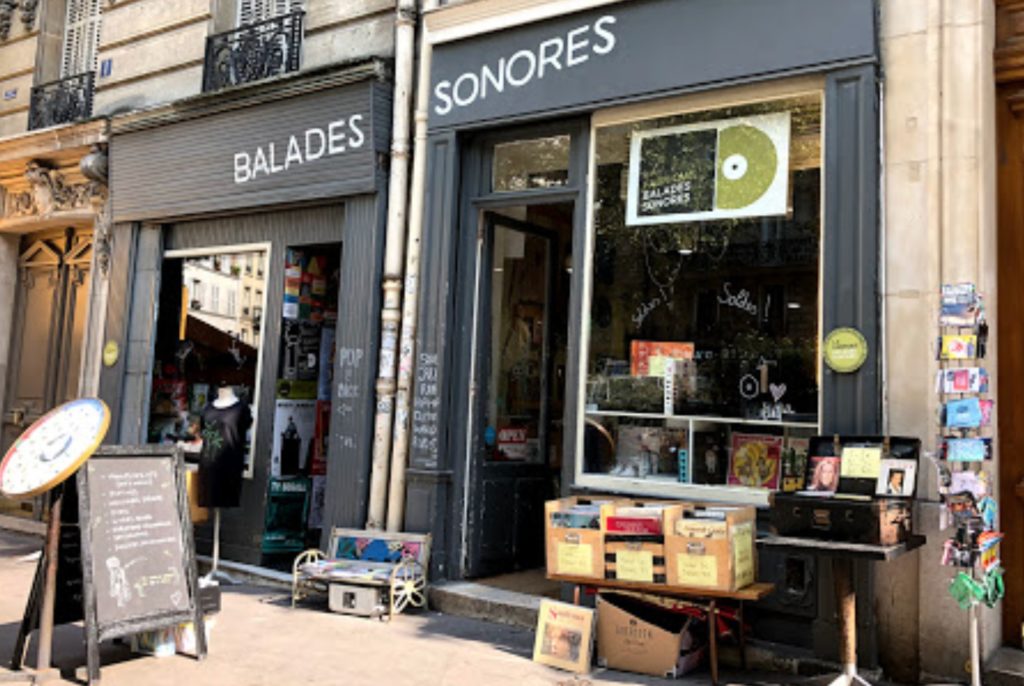 Unlike most of the other spots on my guide to the coolest record shops in Paris, Balades Sonores sells much more than vinyls. Located in the 9th arrondissement, just south of Montmartre, Balades Sonores is in a decidedly hip location; which is evident in their shop.

At Balades Sonores you can find an excellent selection of records, as well as vintage posters, clothes, and other knick-knacks. Vinyls are focused around classic rock, old school psychedelic, and a staggering array of French classics and quite a variety in just about every genre. They also host a live event every Thursday, which is a great chance to meet other fans of the classics! 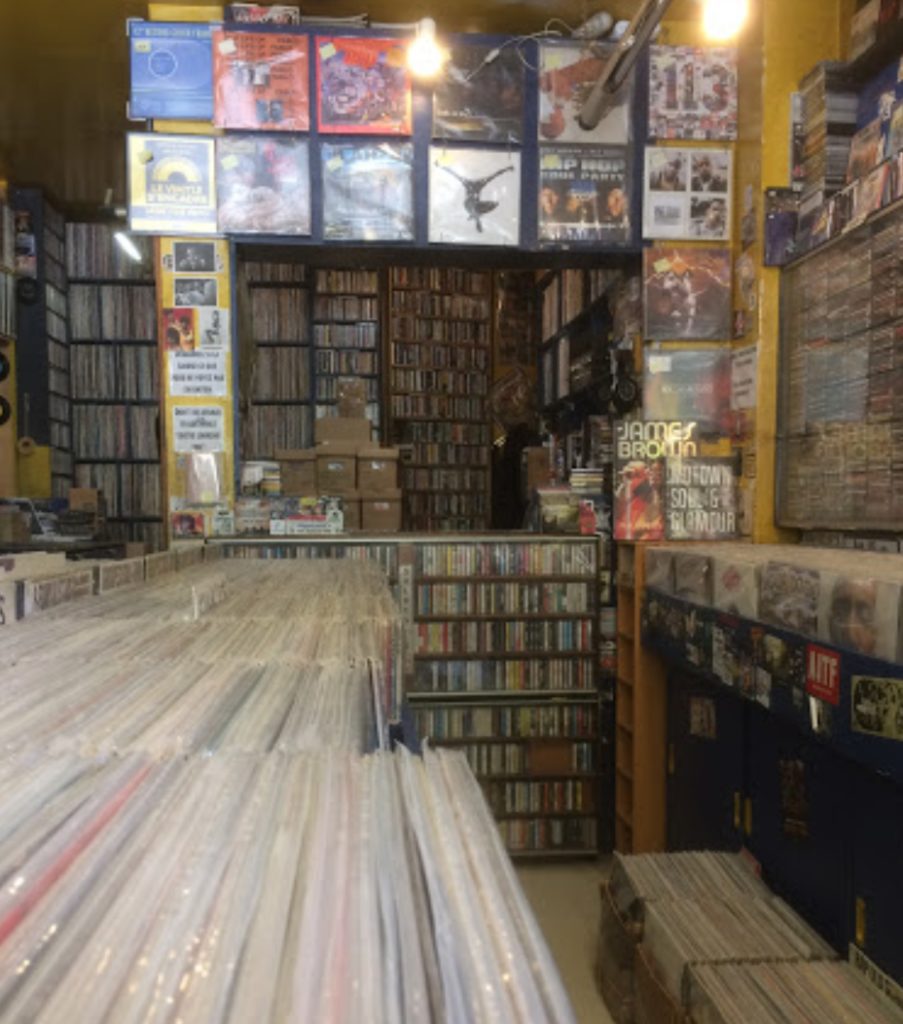 So now our hunt for the coolest record stores in Paris brings us to the Latin Quarter, and a local favorite. Crocodisc is the perhaps the longest-standing record store in Paris; it’s been around for over forty years! There are actually two locations, just next door to each other. One is specialized in jazz albums, and the other has a little bit of everything.

The locals know where to find good deals on records, and their €1 bargain bin always draws eager treasure hunters.  Due to its location in the heart of the Latin Quarter, Crocodisc is a favorite with students and tourists alike. My advice is to arrive early if you’re hoping to browse peacefully as the stores are often jam-packed. 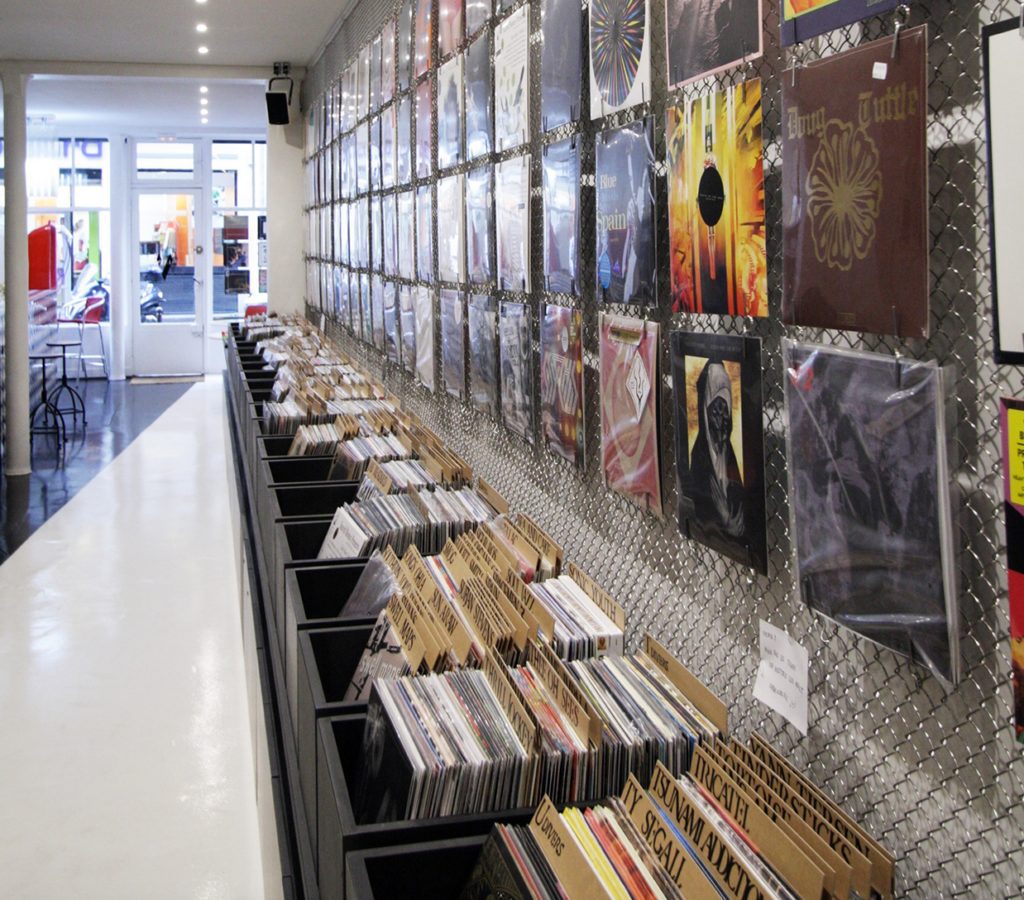 Walrus gives a whole new meaning to the phrase coolest record stores in Paris. This is a place where you can sip a craft brew or have a snack while browsing vintage records. Sound too good to be true? It’s not! Self-acclaimed disc bar, Walrus has been one of the coolest hangouts the 10th arrondissement since they opened back in 2014.

There’s an impressive international collection of vinyls here, and the helpful staff are happy to help you find whatever you’re looking for. One of the things that stands out about Walrus is the laid back atmosphere. Well, and the fact that you can enjoy a drink and tunes from the vintage jukebox while you shop! 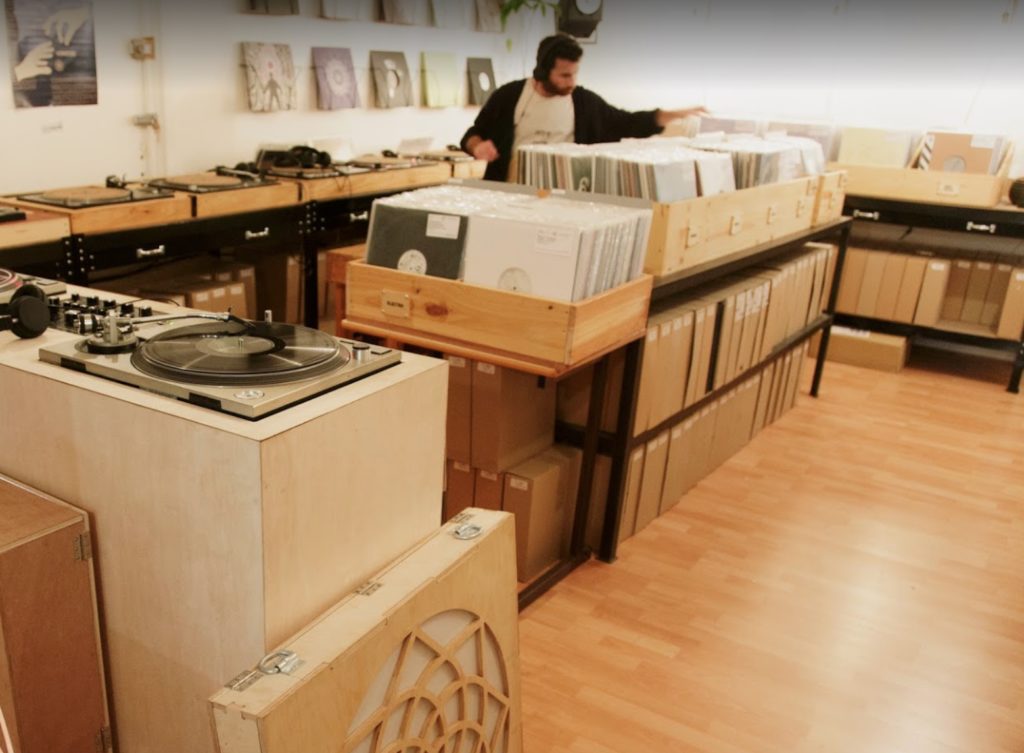 If you’re into house music or minimal genres, Yoyaku record store in Paris’ 20th arrondissement should be your go-to. Belleville and the surrounding neighborhood has been developing a lot over the recent years, and this part Paris is witnessing a cultural revolution. This means that all kinds of cool new bars, restaurants, and of course record shops have opened up here; starting to rebrand Belleville.

Yoyaku is right on point in terms of neighborhood cool, even boasting their own record label. And it’s here that you’ll find the best selection of new and used electronic music in the city. No matter how niche your music tastes may be, there’s a good chance you’ll find something to please your ear at Yoyaku. 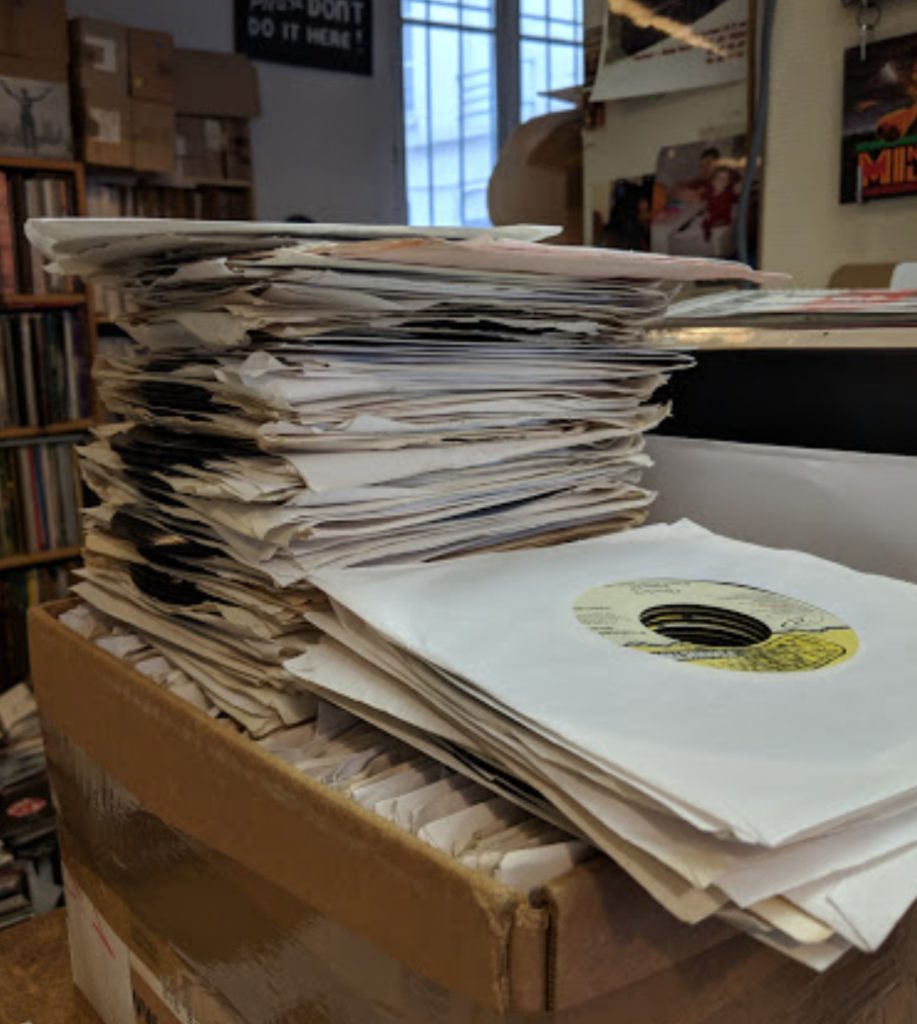 The next stop on my guide to the coolest record stores in Paris brings us back to the 11th arrondissement, where you’ll find Patate Records. Now this place doesn’t look like much from the outside, but the interior is a reggae-lovers dream. Plus, Patate Records has been around since 1992. And if that’s not a testament to their popularity, I don’t know what is.

So if you’re into reggae or roots music, love bargain hunting and working for a great find, head to Patate. They specialize in all kinds of roots and reggae music; old and new. You’ll have to do a little hunting since some of the used records are stacked floor to ceiling, but I find that the payoff is usually pretty good if you’re willing to look for awhile. From Bob Marley to Jacob Miller to modern underground breakouts like Pupajim, there’s always a great selection here. 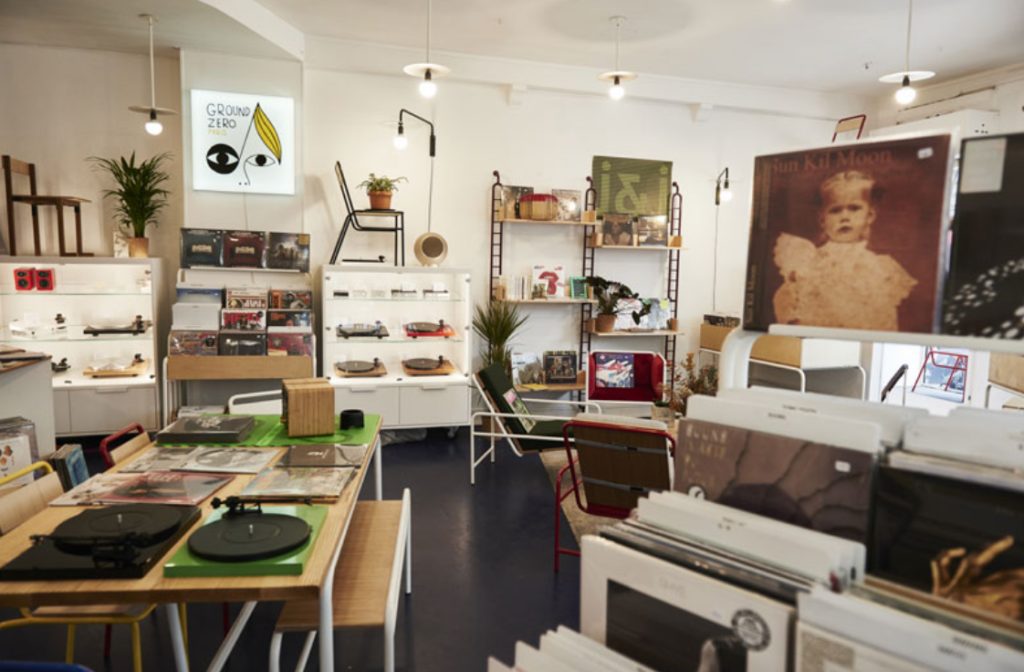 Photo courtesy of Ground Zero – Sourced from their official website

Next up on the coolest record stores in Paris is Ground Zero. This upscale record store and accessories shop is situated in the 10th arrondissement, not far from Gare du Nord train station. Ground Zero not only has impressive vinyl offerings, but they sell record players and accessories too. Basically, everything you need to enjoy your old school music system under one roof.

No matter what your musical preferences are, I’m pretty sure you’ll be able to find something at Ground Zero. Their selection features an eclectic mix of classics, modern hits, and more obscure releases. They also sell some new releases on pre-sale, so you can be the first to hear the cool new albums. 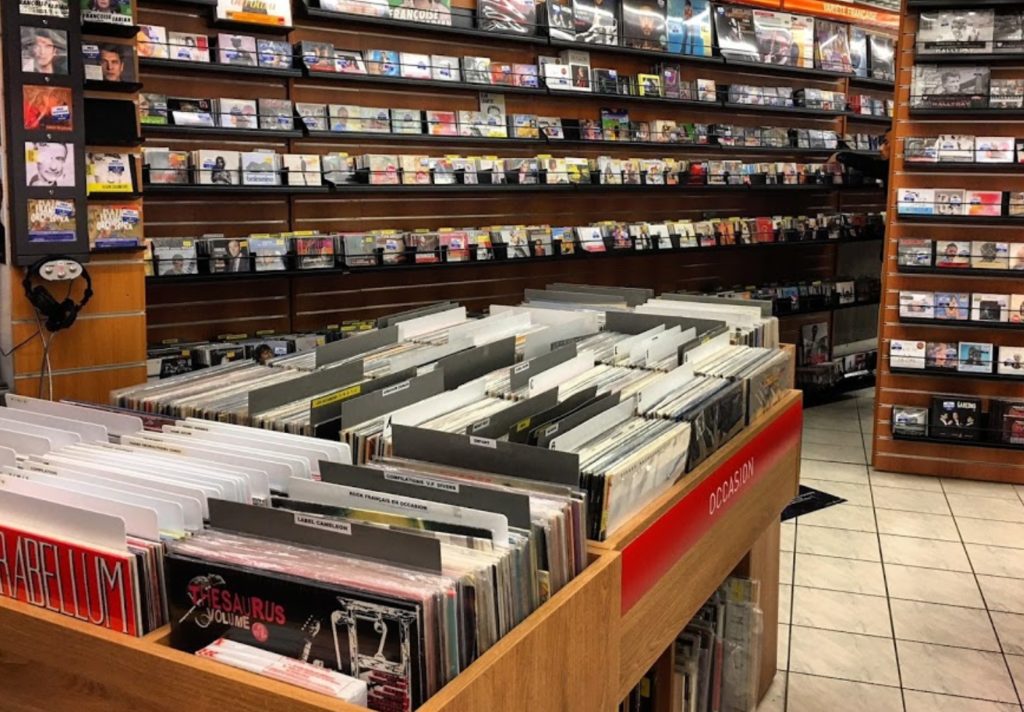 By Gibert Joseph 6 Paris Musique – Uploaded by them

All you bargain hunters out there, here is another address for you! Gibert Joseph has many bookstores and media shops around France; offering both used and new items. But what makes the location in Paris’ Saint-Michel neighborhood one of the coolest record shops in Paris is their massive selection, and low prices. Located just a quick hop from the Seine, Notre-Dame and Saint-Germain-des-Prés, this record shop makes a great place to cool off in summer or wait out a sudden downpour in cooler months.

At Gibert Joseph Paris 6 Musique, you’ll find an enormous two-story building filled to the brim with records, CDs, DVDs and even some comic books. Make your way down the steep spiral staircase to the basement. This level is devoted entirely to records, and you’ll find boxes upon boxes stacked with LPs and 45s as far as the eye can see. The vinyls are roughly arranged by genre, but you’ll probably have to do some sifting in order to find what you’re looking for. When you do find something, chances are the price is right. I’ve found classic albums there for €5. Well, it’s all about the thrill of the hunt, right? 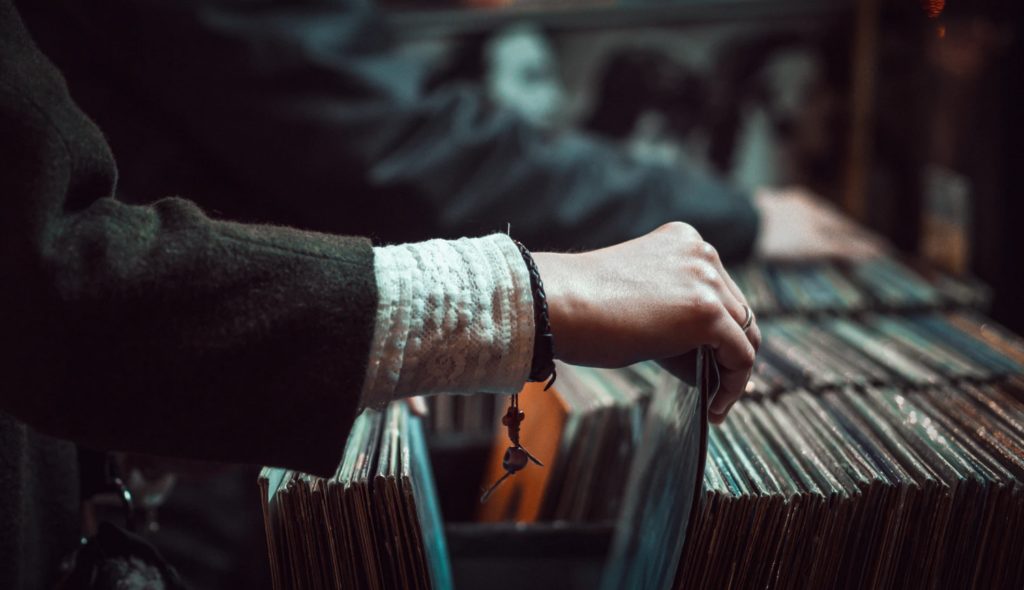 By Edu Grande on Unsplash

Well, now we’ve just about covered the coolest record stores in Paris. There’s just one more place you should know about if you’re on the hunt for some cool record shopping experiences: brocantes! Otherwise known as flea markets or antique markets, these brocantes usually happen over the weekend at various locations around the city. Sellers hawk all kinds of goodies, and some will be themed towards furniture, art, glassware, or books and records for example.

And in my opinion, brocantes are actually one of the best places to find records. Of course, you’ll have to be ready to do a little digging, and potentially some haggling over the price. But the experience is definitely worth it, and you did something new in the city!

Alright, now you absolutely know about all the coolest record stores in Paris. Enjoy your shopping ans hope to see you soon in Paris!