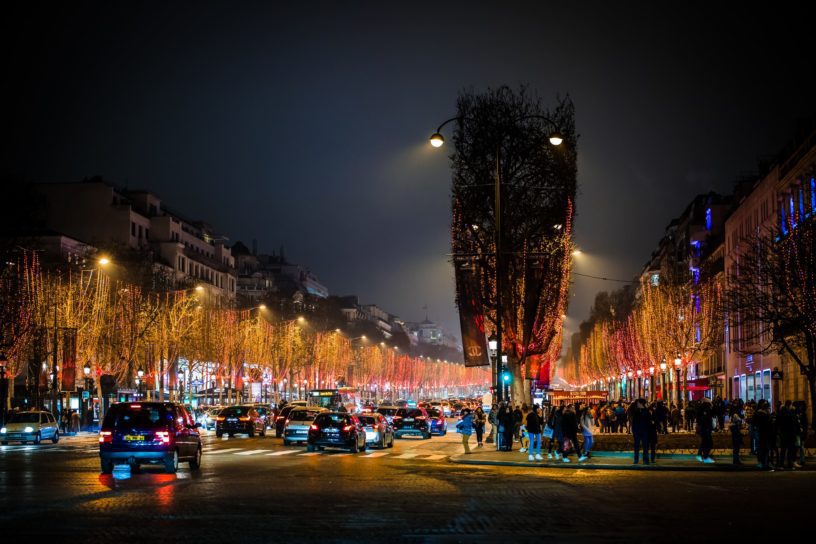 If you’re lucky enough to be spending Christmas time in Paris, then knowing exactly where to go to see the lights is a must.

The city of lights ups its game during holiday season. Most neighborhoods will incorporate decor to some degree, while the most well known city streets will usually set up a grand display of lights and decorations.

These are the five best spots to visit from the end of November through early January.

Bercy is quite a way out of the city center, but a wonderful place to visit during the holidays, especially if you need to get Christmas shopping done.

Bercy Village is an outdoor shopping and entertainment strip that was built into a row of abandoned wine warehouses. The old wooden huts line each side of the strip, and were refurbished to be suitable for retail and dining spaces.

In addition to the shops and restaurants, Bercy is also home to some really interesting attractions. 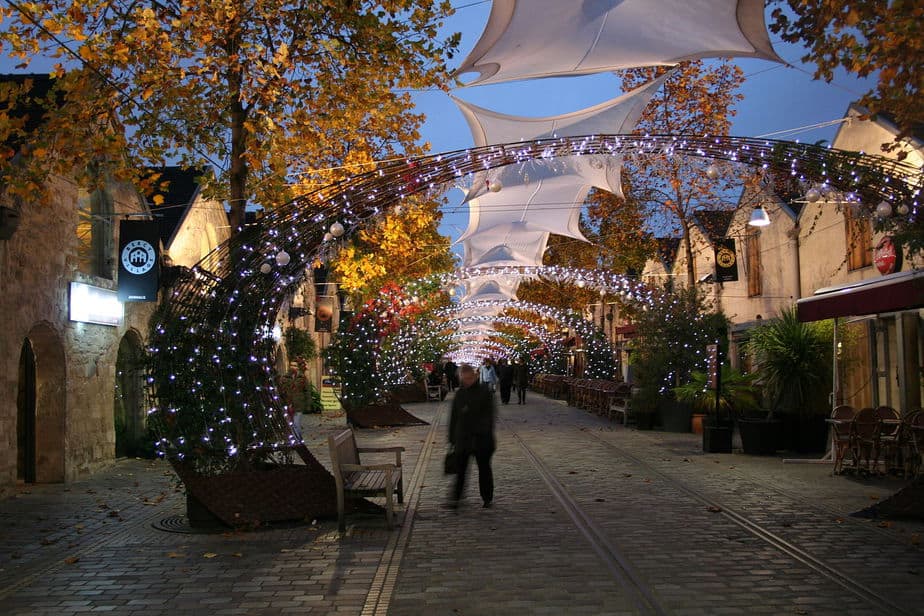 There is a famous museum here called the Musée des Arts Forains. This is a museum dedicated to theme parks: a collection of abandoned theme park equipment from all over the world, through many different eras. The facilities are now open for hire as wedding venues; you can get married on a vintage-style merry go round.

The village was declared a historical landmark in 1986. Every year, come Christmas time, Bercy puts a lot of effort into making the space as festive as possible. There are lights, decorations and a holiday market; free for all to enjoy.

2. Christmas Lights on the Champs Élysées in Paris

The Christmas lights on the Champs Élysées are renowned throughout Europe. They made history when they counted a total of one million light bulbs used in the assembling of the display.

The lights run between the Place de la Concorde and the Arc de Triomphe. They are usually turned on between 5pm and 2am daily. On Christmas Eve and Day they are on continuously.

The Champs Élysées lights work in festive unison with the storefronts that line this famous street. Most of them will go to great lengths in decorating their windows with equally as on theme content.

This is another great spot to see lights and do Christmas shopping at the same time. Bare in mind, however, that this is the busiest shopping street in Paris. The Champs Élysées is visited by 300,000 people… per day.

Not the best spot for the socially anxious, but a really beautiful place for a midnight stroll when things have calmed down slightly.

The Boulevard Haussmann is a two and a half kilometer long stretch of road that runs between the 8th and 9th arrondissements in Paris.

It was created by Napoleon III during his reconstruction of Paris in attempt to make it a more “livable” city. He worked closely with an architect named Baron Haussmann, who was responsible for most of the architectural styles that make up Paris today.

The Haussmann Boulevard is a double layer street lined with trees on either side. During the festive season, the city of Paris puts up incredible lights and decorations all along the strip, starting near the Au Printemps department store. 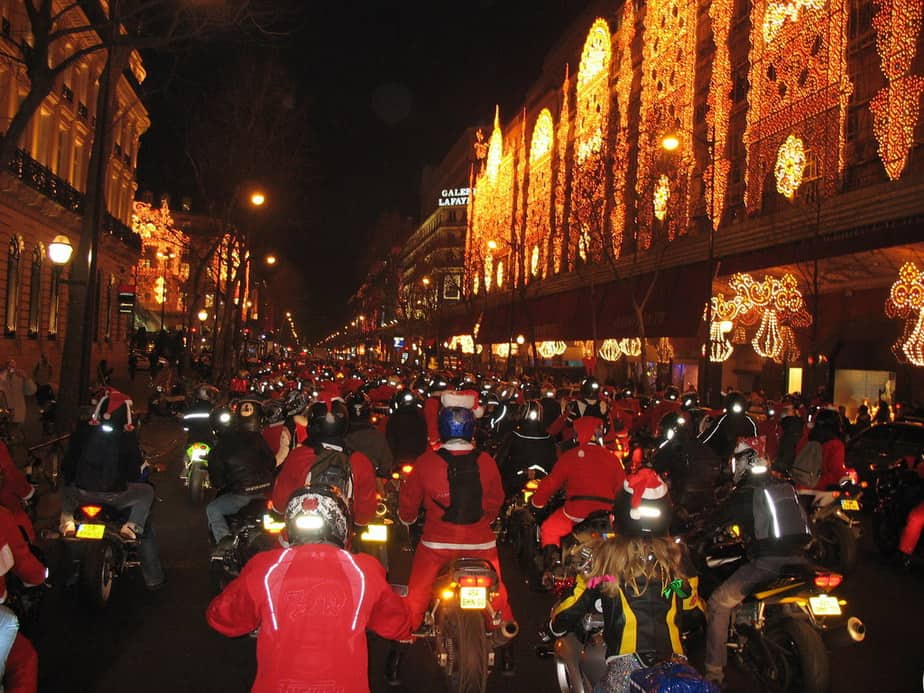 The lights will be up from the end of November until the first week in January. On Saturdays and Sundays there are usually open air Christmas shows that form part of the boulevard’s entertainment program.

Most of the public squares in Paris exist as a result of Haussmann’s creations. The squares of Paris usually also have Christmas light displays to some degree. There will also be giant Christmas trees in most of them, also lit up by night.

4. Christmas Lights on the Rue du Faubourg Saint-Honoré in Paris

The rue du Faubourg Saint-Honoré also runs through the 8th arrondissement. In comparison to the Boulevard Haussmann and the Champs Élysées, this road is far more narrow and intimate.

The road features lights from the end of November through to the very end of January, one fo the longest running displays in the city. It is free to enter and to walk down, but you’ll encounter charity events constantly taking place on the street that anyone can enter for just €10, with chance to win some crazy prizes. 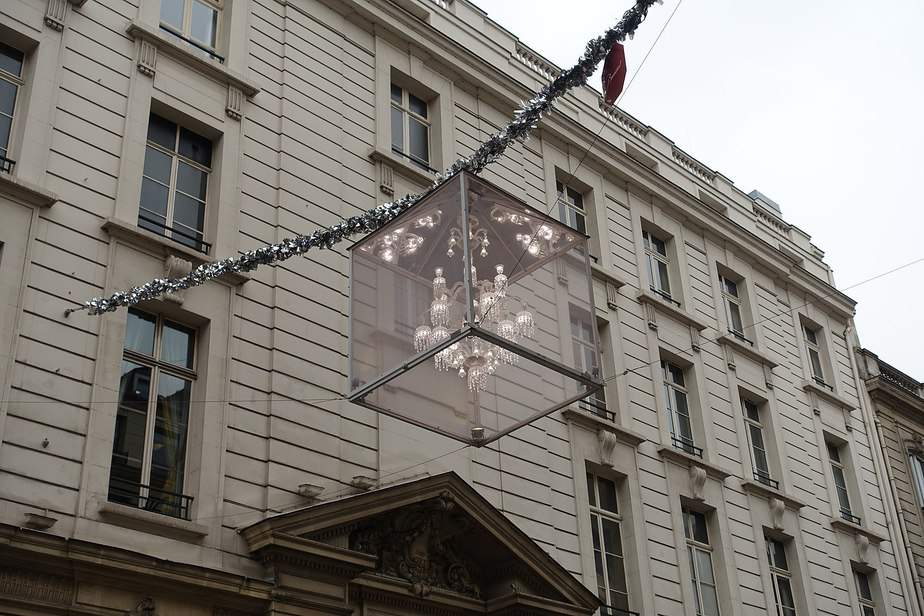 Despite being the more low-key of the Christmas lighting festivities, there are still live carol performances on the rue du Faubourg Saint-Honoré throughout the month of December.

There are shops along the Faubourg Saint-Honoré, too. Not nearly as many as the Champs Élysées, but a few unique boutiques and popular name brands.

5. Christmas Lights from the Seine River in Paris

Instead of heading to just one light display while in Paris, why not see them all?

The Seine River cruises take advantage of their unique perspective of the Parisian banks but touring past all of the most beautiful Christmas light displays that they can.

These Christmas light tours are available for booking from the end of November, and most of the boating companies that do year round tours of the city lights will incorporate the Christmas themed banks into their sessions. 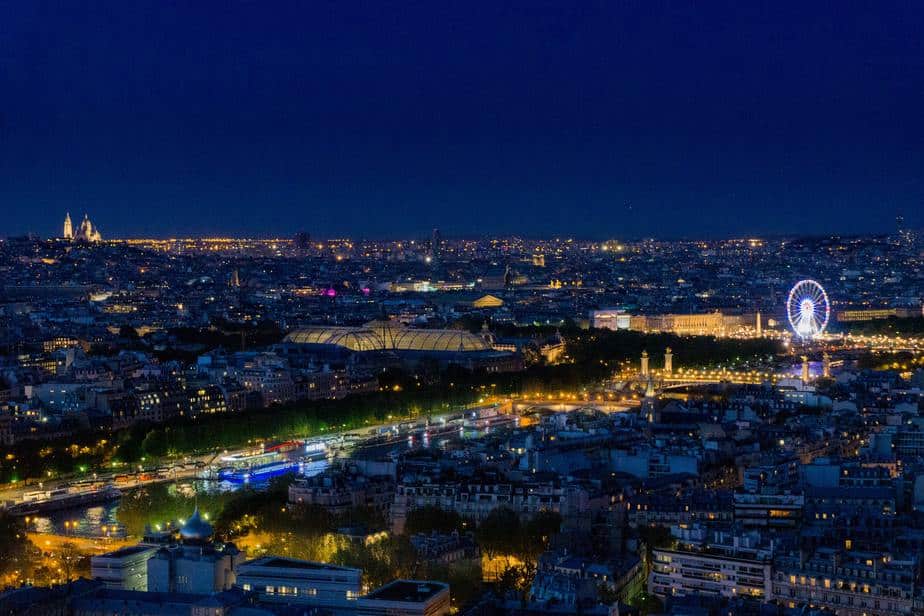 Book well in advance, as these tours tend to fill up and sell out before you know it. Likewise, the free guided walking tours of Paris are equally as worthwhile activities that will take you past many of the Christmas lights in the city center. Again, you must book your spot for these in advance.