10 Fast Facts about the Champs-Élysées 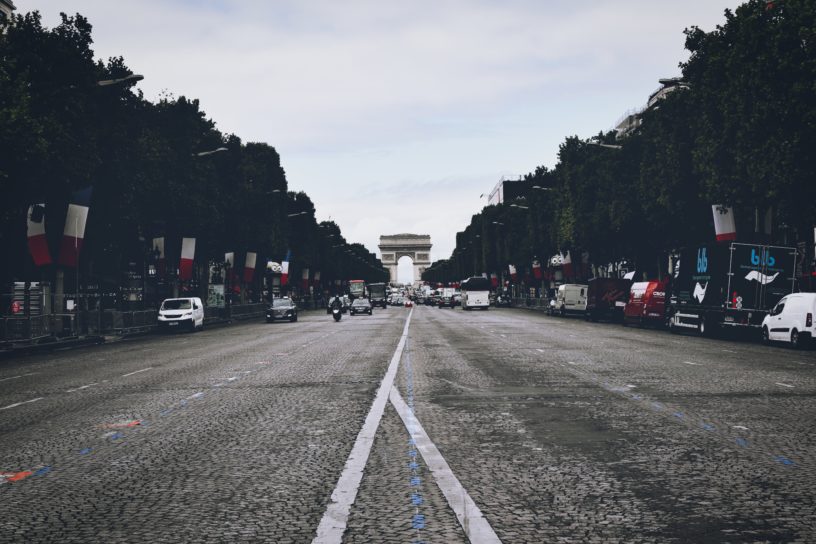 10 Fast Facts about the Champs-Élysées

Ask any Parisian about the Champs-Élysées and they will all tell you the same thing. “It’s a tourist trap!”, “too many people“, etc. Though you might receive mixed reviews from true Parisians, I recommend going to the Champs-Élysées if this is your first time in Paris. However, be prepared for heavy crowds no matter the time of year! The iconic shopping street is a trademark of Paris and have even inspired some very famous songs. I’ve compiled a list of the top 10 fast facts about the Champs Élysées.

The lower part of the Champs Élysées starts right at Place de la Concorde and runs through the Jardin des Champs Élysées, a park which contains the Grand Palais, the Petit Palais, the Théâtre Marigny, and several restaurants, gardens and monuments.  Just as the US. President lives in the city center, so does the French President! The Élysée Palace is the official residence of the President of the French Republic. It is heavily protected right near the Champs. The famous avenue ends at the Arc de Triomphe, built to honour the victories of Napoleon Bonaparte.

The avenue is 1.9 kilometers long and 70 meters wide, and lined with chestnut trees on either side. In the winter months, the trees are lit up with holiday lights giving it a stunning aesthetic. If you’re curious to know more about the world’s most beautiful avenue, known for its luxury shops and view of the Arc de Triomphe, keep reading  for a list of the 10 fast facts about the Champs Élysées…

The street used to be all open fields. 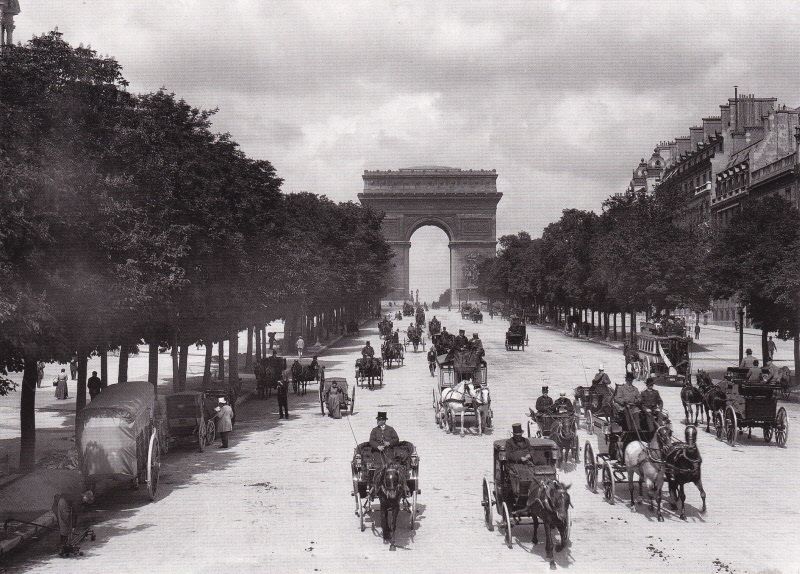 The Champs Élysées wasn’t always designer shops, movie theaters, and restaurants. At one point, up until the year 1616, the avenue was not an avenue. It used to be an open field with grass and trees. Imagine if Marie de Medici hadn’t ordered the construction of this avenue! We wouldn’t see Paris the same, and the famous Joe Dassin song would have never been made…

It is the most visited street in all of Paris… 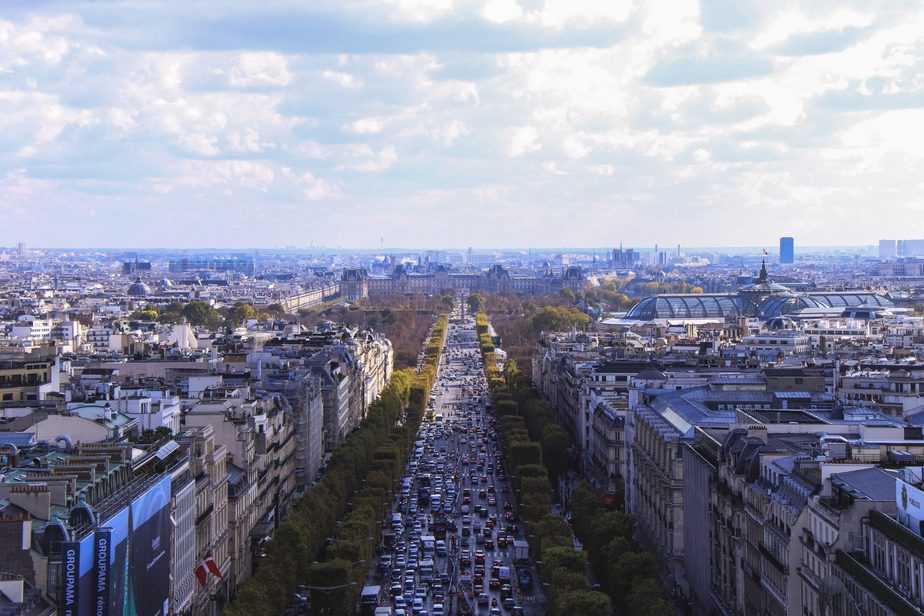 This one probably isn’t such a surprising fact, but I’ll bet you didn’t know that each day, over 300,000 people walk the streets of the Champs Élysées. The iconic status makes the Champs Élysées  one of the most expensive strips of real estate in the world. 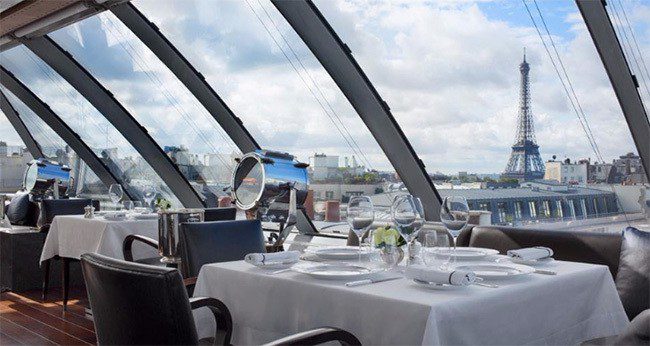 It pays to be a wealthy tourist in Paris. The hotels around the Champs Élysées boast some of the most expensive price tags of any city. One of the most exquisite hotels is the renowned Peninsula Paris hotel. It boasts a dazzling rooftop with stunning views, however be prepared to spend 10 euros on an espresso, and at least 25 euros for a cocktail. Want to spend the night in The Peninsula? The average cost per night is around 1000 euros! Another five star hotel a bit more affordable is the Sofitel. On off-peak season, you can find rooms for as low as 300 euros a night- not too bad for a five-star experience. 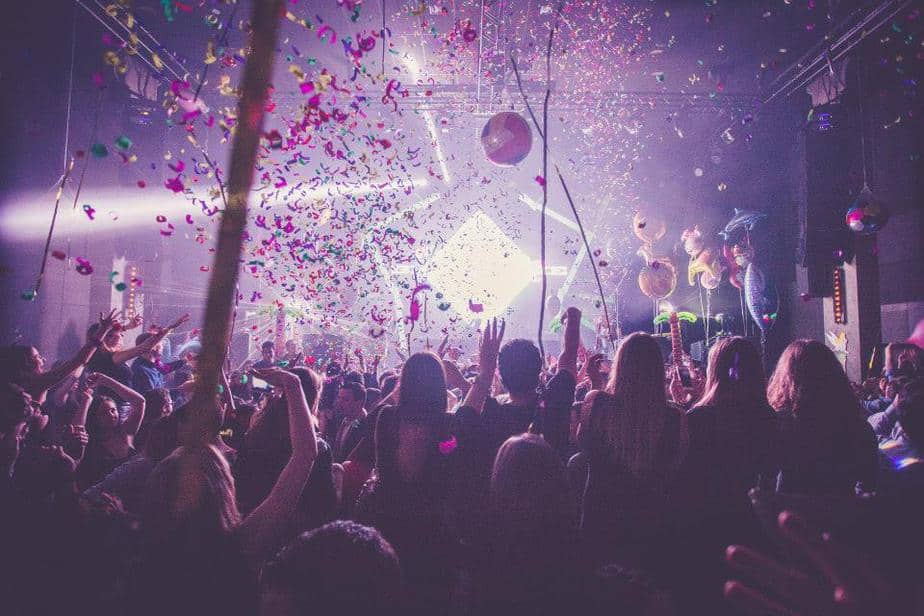 Once you finish all your shopping, you might want to let off some steam at one of the many nightclubs located around the Champs-Elysées.

Read our list of the 10 best nightclubs near the Champs Élysées! Be aware that during special evenings, such as holidays or fashion week, these clubs tend to be very exclusive. 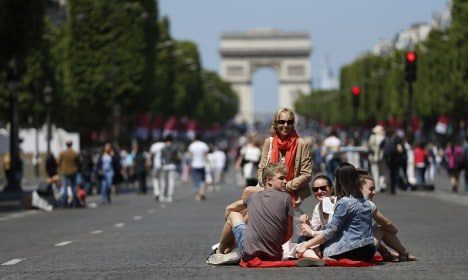 One Sunday each month, the entire length of the famous Avenue des Champs-Elysées is open for pedestrians. You might even find some enthusiastic pedestrians picnicking on the cobblestones and letting their kids run around.  It is a great photo opportunity experience , too, offering the marvelous backdrop of the Arc de Triomphe. In fact, every first Sunday of the month, you should take advantage the pedestrianization of the capital’s 1st, 2nd, 3rd and 4th arrondissements.

Champs Elysées is one of the hottest spots for …pickpocketing! 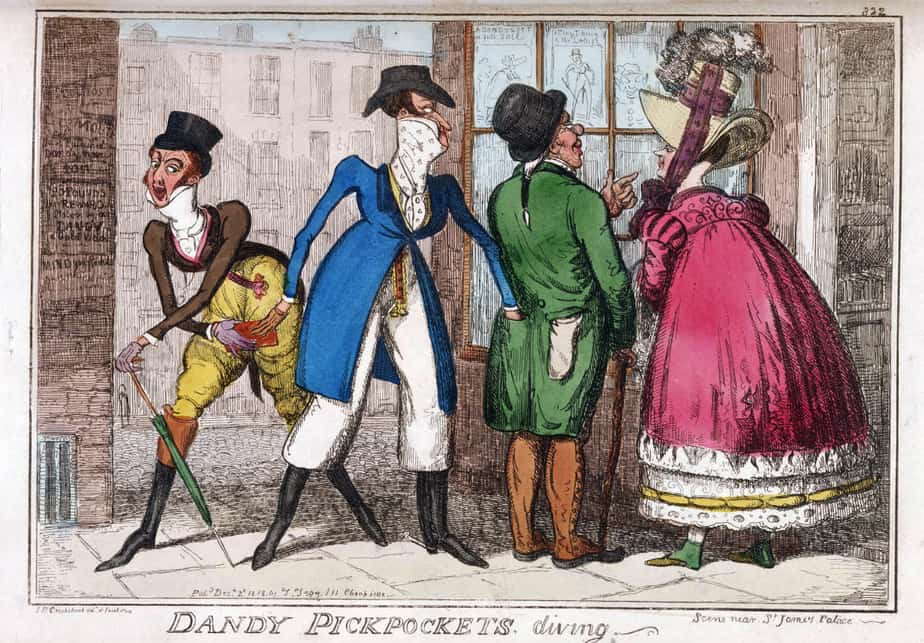 You might have heard that Paris is a very popular tourist spot, so therefore a very popular place to get your things stolen from the infamous pickpockets. The gorgeous avenue is actually one of the top spots for thieves to hang out and scope locals and tourists alike, so be very careful and attentive when strolling through, and don’t let the fancy stores trick you into thinking you’re safe. I wrote another article on how to stay safe and avoid being a target for pickpockets in Paris, which you can read here.

There is meaning behind the name…. 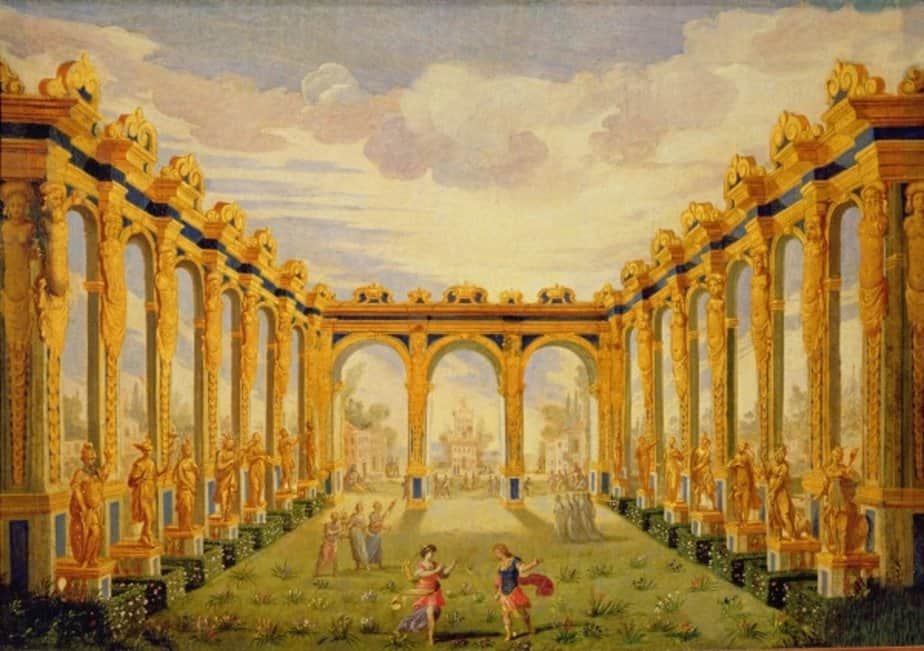 Champs Elysées means “Elysian Fields”. Elysian Fields is a Greek mythology conception of the afterlife, or heaven. I’m not so sure that I consider the Champs Elysées a form of heaven, as the crowds and commercial atmosphere isn’t the most relaxing, however it is definitely a must-see location in Paris for a first-timer!

There are little to no houses on the Champs-Elysées 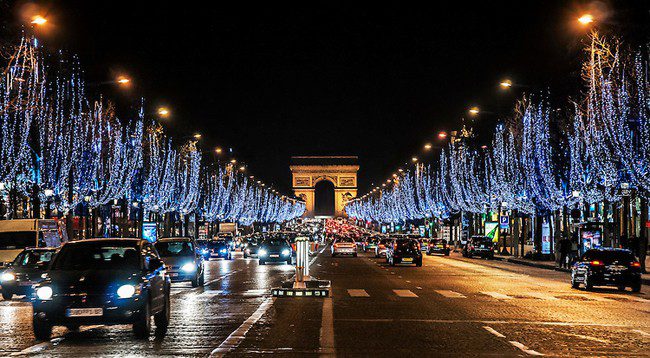 Rent costs 1.5 million euro per 1,1100 square feet of space, meaning literally no one can afford to live on the avenue.

The Champs Elysées is known to have many flagship stores for famous brands! 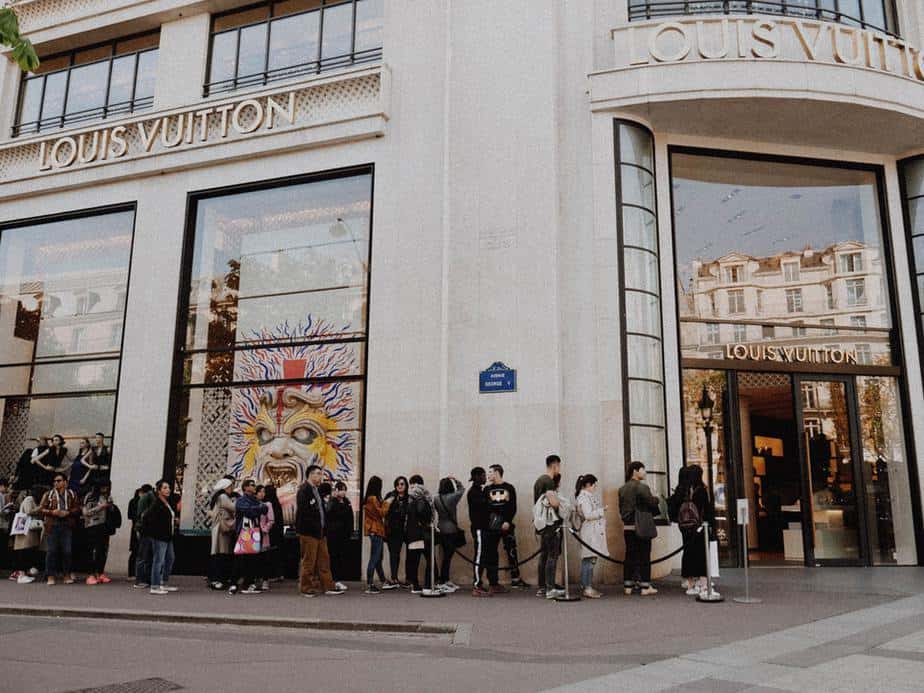 A flagship store is the most important store in a retail chain, usually with the largest volume of sales. This makes sense since Paris is the capital of fashion. On the Champs Elysées you’ll find flagship stores for Adidas, Longchamp, Louis Vuitton, Dior, and more.

During World War II,   the Germans hung a swastika flag at the Arc de Triomphe and marched down the Champs Elysées… 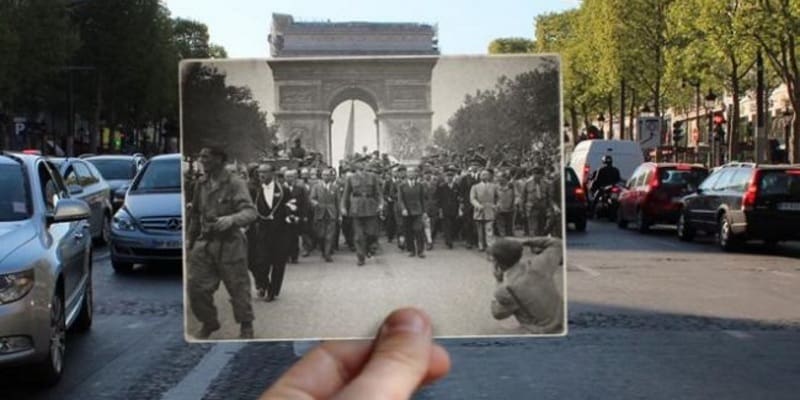 It was also the site chosen by General Charles de Gaulle to celebrate the August 25, 1944, liberation of Paris from the Germans.  Read more about World War II in Paris, here!

I hope you enjoyed reading these facts about the world’s most iconic avenue! For more ideas, check out our other articles about the Champs Elysées!