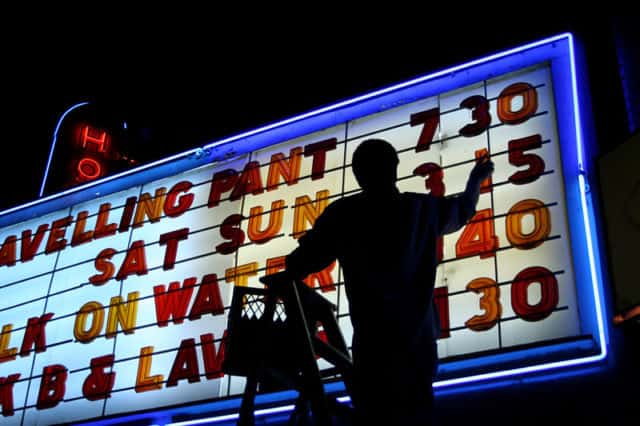 French cinema is certainly well-known worldwide, thanks to movies like Amélie and Blue is the Warmest Color. If you’re just as obsessed with France and Paris as I am, you likely cue up a good French film to get the feeling like you’re actually en France. At least, that’s what I used to do before I moved to Paris!

French scary movies aren’t as well known as their romantic or dramatic counterparts, but there are quite a few out there! Sometimes it’s fun to be scared, right? If you enjoy all things creepy and frightening, keep reading for my list of the 10 best French scary movies.

Some of the creepiest French scary movies are the older ones, which is why the first on my list is from 1928. La Chute de la Maison Usher (The Fall of the House of Usher) pays homage to American culture. It is based on a poem of the same name by the famous American poet Edgar Allan Poe, who is also known for his horrific works.

Roderick Usher, the main character, lives in a decrepit mansion. His wife is sick and dying and so Usher decides to paint her in her last moments. When his wife does die, he buries her in the family tomb. But, low and behold she actually wasn’t dead, and Usher buried her alive! You’ll have to watch the movie yourself to see what happens next.

This movie was such a success that it was released in the United States under three different names! Les Diaboliques (The Devils), is a 1955 film that made waves when it came out. Supposedly, the director Henri-Georges Clouzot went after the screenplay rights just so Alfred Hitchcock wouldn’t be able to have them. Oh, the drama of the film industry!

The movie is set in an all-boys boarding school. The headmaster’s wife and his mistress team up to take down the abusive headmaster through their own measures. The women succeed in killing him, but his corpse mysteriously disappears before they can get rid of the evidence. Find out what happens next if you decide to watch this one!

I told you that older French movies are creepy. Just looking at the stills from Les Yeux sand visage (Eyes Without a Face) gives me the heebie-jeebies! This 1960 horror film is based on a novel by Jean Redon with the same name.

The movie tells the story of a plastic surgeon who will do anything to give his daughter a new face after she is in a terrible car crash. If you like gore, be sure to add this one to your list!

Fast forward about 20 years and you have Possession. This movie from director Andrzej Żuławski is quite possibly one of the most famous French scary movies of all time, and for good reason. It is truly a cult classic from the 1980s and is definitely a psychological thriller more than anything, although there are some gruesome moments as well.

The movie follows a married couple who don’t seem to do too well when they are separated. I won’t say anymore as I don’t want to give away too much, but be prepared to be freaked out if you decide to give this movie a go!

Trouble Every Day may be in English but don’t be fooled, this is a French scary movie! This movie’s director, Claire Denis, is one of the most celebrated female directors in the French film industry. Denis doesn’t always do horror, but she got it right in Trouble Every Day.

If you loved the scary movie Halloween, you’re going to love Haute Tension (High Voltage)! The movie’s director was inspired by the American cult classic, and if you’ve seen it before you can definitely see the similarities between the two.

This movie takes place in a rural French town and tells the story of a pair of best friends who have plans to spend the weekend hanging out and studying at one of the characters’ parents’ house. But, almost immediately after they settle in at home, a strange serial killer appears at their door.

If you’re a fan of The Blair Witch Project, you’ll love the next French scary movie on my list: Ils (Them). The storyline is supposedly based on true events, and if you’re anything like me, you’ll be freaked out almost immediately. I think this film is my favorite on my list, as it’s not very gory. Most of the violence happens offscreen, making it a serious psychological thriller.

A couple moves into an old house in a remote area in Romania. Terror ensues!

The story is centered around a cult that kidnaps young women and tortures them, for reasons that you’ll find out if you watch it! The storyline focuses on two young women who were kidnapped by the cult as they work together to get back at the people who tortured them years before.

Next up on my list of the 10 best French scary movies is Amer. This movie is split into three parts and is referred to as a Giallo by most cinema buffs. If you’re scratching your head and wondering what that means, you’re not alone! I just recently discovered that a Giallo is an Italian term for mystery fiction and thriller movies. Now you know!

Amer follows a girl named Ana as she grows up through her teenage years into womanhood. You’ll have to watch it yourself to find out what happens next!

I’ve saved the creepiest for last. Grave (Raw) is so brutal that supposedly when it was released in Sweden, several members of the audience had to leave the room. And, the ones that stayed reportedly threw up and fainted! So, you’ve been warned.

This movie tells the story of a woman who is studying to be a veterinarian and who is vegan. She tries meat and becomes obsessed with it, and pretty soon gets a taste for humans too. Seriously, if you’re squeamish, skip this one. But, if you think you can handle it, this is one scary movie that will creep you out for weeks.

If you’re looking to get freaked out, you’ve come to the right list. I hope you’ve enjoyed learning more about my top 10 best French scary movies. I hope these films scare you, keep you up at night, and have you checking under the bed for monsters.

Our expert local guides are also sure to have even more movie recommendations for you. If you’re in Paris and you want even more movie advice, click here to check out all of the options.