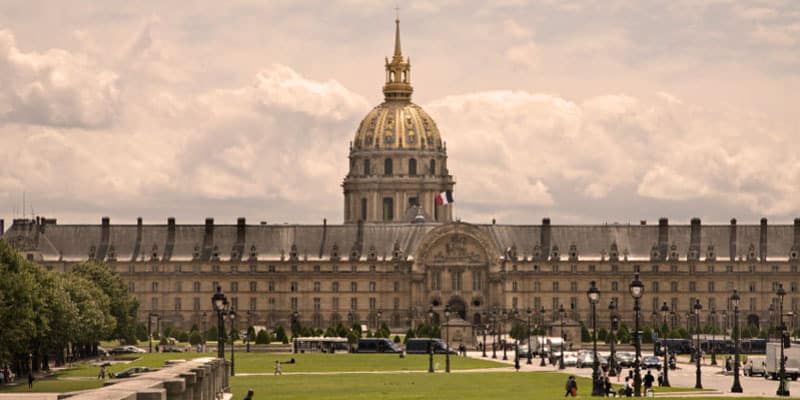 If you know anything about French history, you’ve probably heard of Napoleon Bonaparte. Even if you haven’t studied the history of La France, you may have heard of the Napoleon complex, which was named after this former French ruler! If you have the Napoleon complex, it means that you are short in stature, and in order to make up for this lack in height, you may act a little more aggressive than you should. Am I ringing any bells?

I digress! Napoleon (sometimes also referred to as Napoleon I), was the first Emperor of France after the French Revolution from 1804-1814, and then again for a short time in 1815 during the Hundred Days War.

Napoleon rose to power after the French Revolution by holding elections (that many scholars say were rigged in his favor), and subsequently being elected as First Consul. When he was serving in this office, he received multiple death threats and endured several assassination attempts.

At the time, the citizens of France were fed up with the turmoil and violence that were brought on by the French Revolution and the Reign of Terror that followed it. They were yearning for a leader to take control, and that’s where Napoleon stepped in! He was able to convince the French people that they needed a stable and powerful leader, and thus declared himself Emperor.

Many of Napoleon’s reforms, such as the Civil Code and the modern French administration, have had a long and lasting impact on France and Europe. It should come as no surprise that there are traces of his reign throughout Paris!

Read on if you want to learn how to discover the best way to see the Paris of Napoleon! 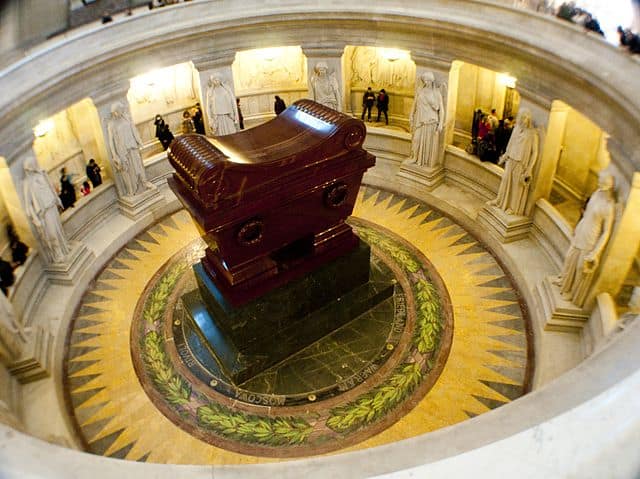 You’ll want to start your visit of the Paris of Napoleon by heading to the Dôme des Invalides, where you’ll find Napoleon’s tomb. His body was brought back from the island of Saint Helena in 1840, 19 years after his death, on the initiative of King Louis-Philippe.

Today, Napoleon rests in the Cathédrale Saint-Louis-des-Invalides, “on the banks of the Seine among the people of France whom he so much loved,” as he wanted stated in his testimony.

The tomb lies right under the Dôme des Invalides, in an uncovered and circular crypt. In the Invalides you will also find the tombs of Napoleon’s son, as well as those of his brothers Joseph and Jérôme.

Step 2: Visit the Cathédrale Saint-Louis-des-Invalides and the Army Museum 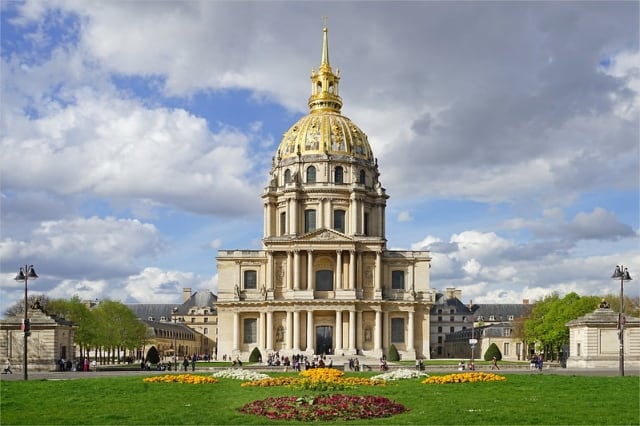 In addition to Napoleon’s tomb, Les Invalides was a military hospital. The complex also houses a church and a museum centered on the history of the French military. It is aptly called the Musée de l’Armée (the Army Museum in English)!

The Church is a huge part of the Paris of Napoleon. It may have been built long before his reign, but it is decorated with flags captured from the enemy during the Napoleonic wars!

The army museum retraces military history from the Middle Ages until today, with a special section dedicated to Napoleon. Don’t miss the painting Napoleon on the Imperial Throne, a portrait of the former Emperor done in 1804 by Ingres, and the original flag of the first regiment of the Imperial Guard, which Napoleon kissed during his farewell ceremony in 1814 in Fontainebleau, France.

Step 3: Head to the Place Vendôme

After the Invalides, the Vendôme Column is the second must-see of any visit of the Paris of Napoleon. Located at the center of the Place Vendôme, this column was commissioned by Napoleon to commemorate his victory at Austerlitz against the Russian Empire, similarly to what the Roman Emperors did during the Antiquity.

The column is made out of stone, but is covered in bronze, and includes a bas-relief (a type of sculptural relief), that represents scenes of battle and of victory. At the top of the column stands a statue of Napoleon dressed as a Roman Emperor.

The bronze used for the column was the same bronze from some cannons which were captured from the enemy at the battle of Austerlitz. There is a staircase inside the column leading to the top, but it is unfortunately closed to the public.

Step 4: Take a closer look at the Arc de Triomphe 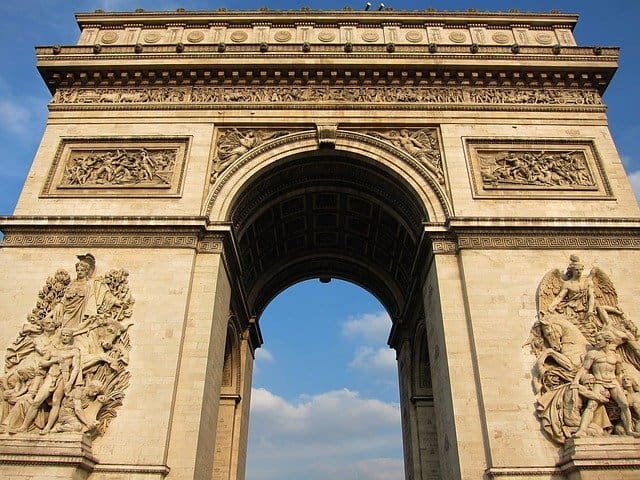 The Arc de Triomphe is one of Paris’ most famous monuments, but few know that it was built on Napoleon’s initiative in order to commemorate his victories. Construction started in 1806 but stopped when the monarchy was reinstated.

Work on the monument eventually began again under King Louis-Philippe and was finished in 1836. On the Arc, you will find many bas-reliefs, which show scenes of Napoleonic battles, such as Napoleon crossing the bridge at Arcole and the Battle of Abukir.

Entry fee: It is free to visit the outside of Arc de Triomphe, and it costs 12 euros to climb to the top 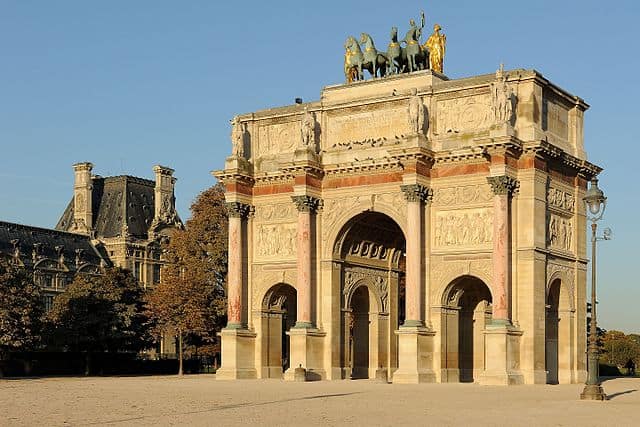 The Arc de Triomphe du Carrousel is the great Arc de Triomphe’s “little brother.” Also built by Napoleon in 1806 to celebrate his victories, it is my favorite remnant from the Paris of Napoleon, with its many colors and fine architecture.

The original quadriga (a car or chariot pulled by four horses) on top of the structure was taken from the Saint-Marc Cathedral in Venice, which was brought back to Paris by Napoleon.

But, after Napoleon’s defeat in 1815, the quadriga was brought back to Venice. The one that you see today is a copy of the original. The Arc de Triomphe du Carrousel used to serve as an entrance gate to the eastern courtyard of the Tuileries Palace. The copy was then destroyed during the Paris Commune in 1871, but the arc remained. It has since been restored, which you can see today! 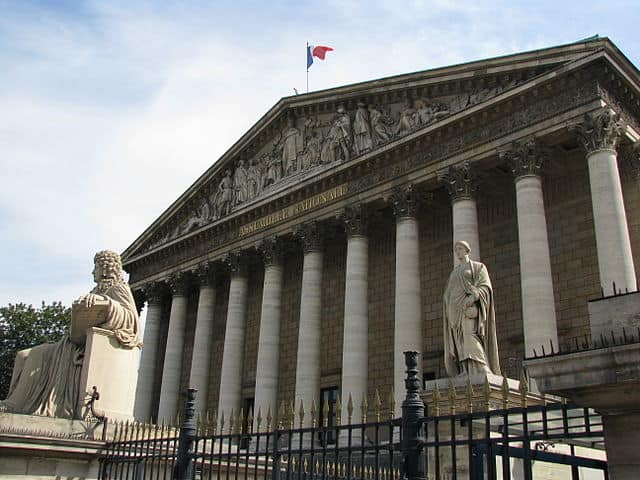 The National Assembly in Paris by Ex13 – WikiCommons

From the Place de la Concorde, you can head to the National Assembly on one side, the Madeleine church on the other.

The Madeleine was commissioned by Napoleon, and was to be a temple dedicated to his military victories. But, construction was finished long after his reign, and the building became a church.

Napoleon ordered that the back of the National Assembly, which faces the church, to match the colonnades (a row of evenly spaced columns that support the front of a building) of the Madeleine.

When you look at the two colonnades which face each other today, you can really see the Paris of Napoleon! 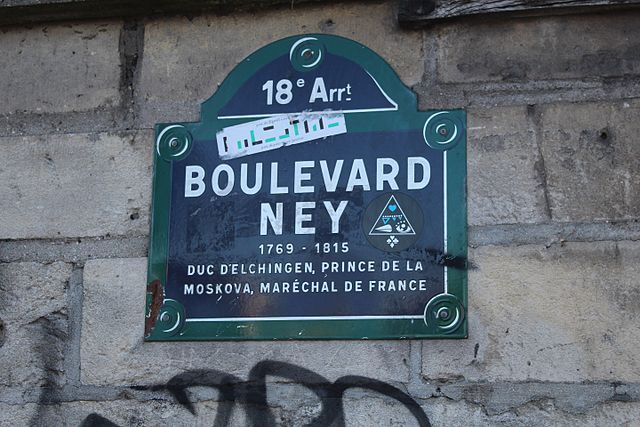 One of the Boulevards des Maréchaux in Paris, Boulevard Ney in the 18th arrondissement by Chabe01 – WikiCommons

The Boulevards des Maréchaux (The Marshal’s Boulevards in English) is a set of boulevards which form a circular route around Paris. They were built in 1920, when the military wall that was in place was destroyed to expand the city.

Each section of the Boulevard des Maréchaux bears the name of one of Napoleon’s marshals. Out of the 26 marshals of Napoleon, 4 do not have their own boulevard, because of one of two reasons. Either another street in Paris already has their name, or in the case of three of them, Bernadotte, Marmont and Grouchy, because they are considered to be traitors!

If you are keen on Napoleon’s marshals, then you might also want to add their tombs to your list of places to explore. You’ll find a few in the Père Lachaise cemetery!

There are 22 boulevards des maréchaux in Paris, spread out over 9 arrondissements. Click here for a comprehensive list! 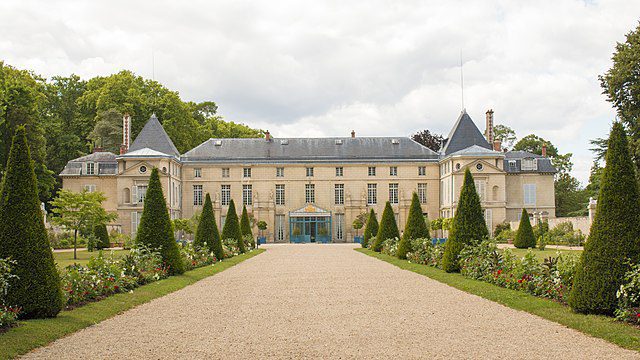 A visit of the Paris of Napoleon wouldn’t be complete without seeing Le Château de Malmaison, located in the western suburbs of Paris.

Le Château de Malmaison was the home of Napoleon’s first wife, the Empress Joséphine. Inside the castle, you will see furniture typical of the neo-classical empire style, which draws inspiration from the antiquity.

If you like exploring old castles such as Versailles, you’ll love this place!

Metro station: Rueil-Malmaison on the RER A, then take bus 258 to the “Le Château” stop. Cross the RN13 and turn back towards the crossroads. The château is 300m to the right.

I hope you’ve enjoyed learning more about Napoleon Bonaparte, and the lasting impression he made on the city of Paris!

If you want to learn even more about Paris and it’s famous citizens, why not join us on a walking tour? Click here to learn more about tour options, and to make your booking!