If you want to know where to enjoy the best views over the city of Paris, this article has been written for you! Today I will be sharing with you how to enjoy Paris from above and its 5 highest points! 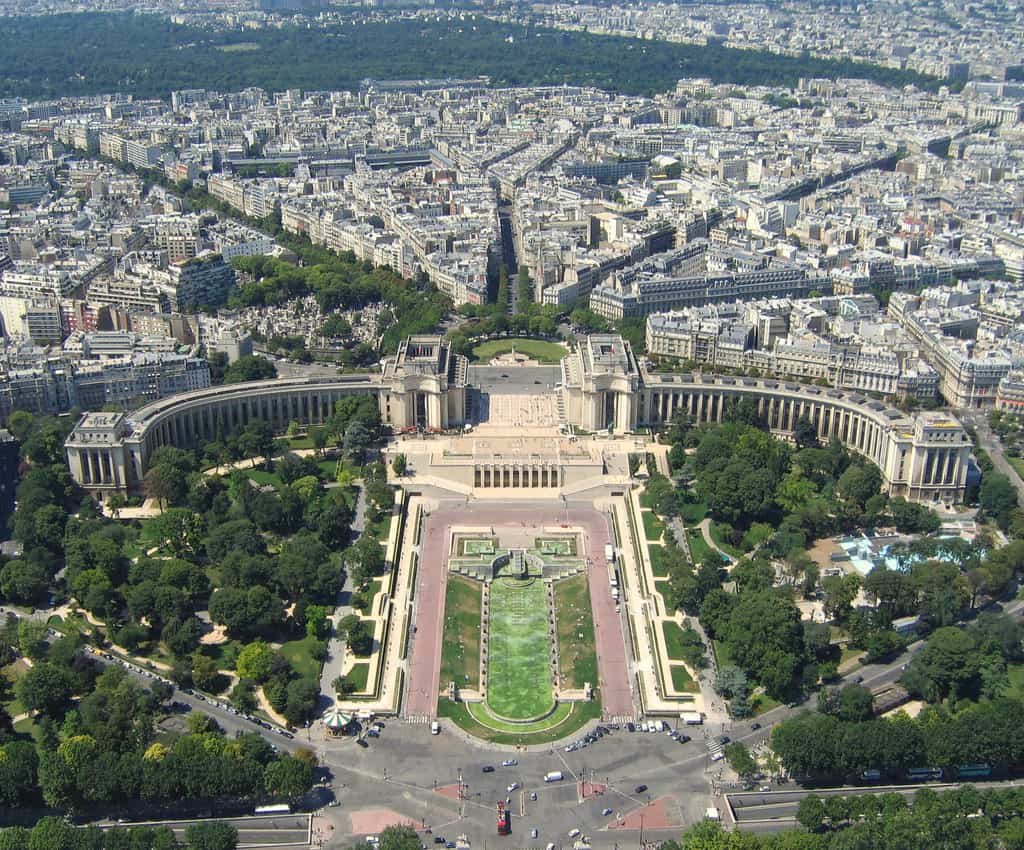 The Iron Lady was built for the 1889 World Fair. This fair was to celebrate the 100th anniversary of the Prise de la Bastille, “the storming of the Bastille”, which is now the fête nationale that commemorates the beginning of the French Revolution and the start of the French struggle for democracy. Inaugurated in 1889, the tower was meant to be destroyed after twenty years but a new purpose was given to the tower so that it wouldn’t be demolished. The Eiffel Tower played a key role during the WWI, because a huge radio antenna was installed so that the French military could send and receive wireless messages.

Thanks to this event, you are now able to enjoy this amazing iron structure and one of the most impressive views over the city of Paris. If you want to go to the top of the tower, you will have to pick the “Lift entrance ticket with access to the summit” on the website. For adults, it will cost 25 euros. For youngsters aged between 12 and 24 years old, it will cost 12.5 euros and 6.30 euros for children aged between 4 and 11 years old and for disabled people. The other ticket option only gives you access to the second floor.

If you want to know a little more about the Eiffel Tower, I advise you to read two of the articles I’ve written about it. There’s one about its history and the best fun facts about our Iron Lady, check it by clicking here. Then, you also have another one that provides some useful tips every visitor should know before visiting the Eiffel Tower, read it here. 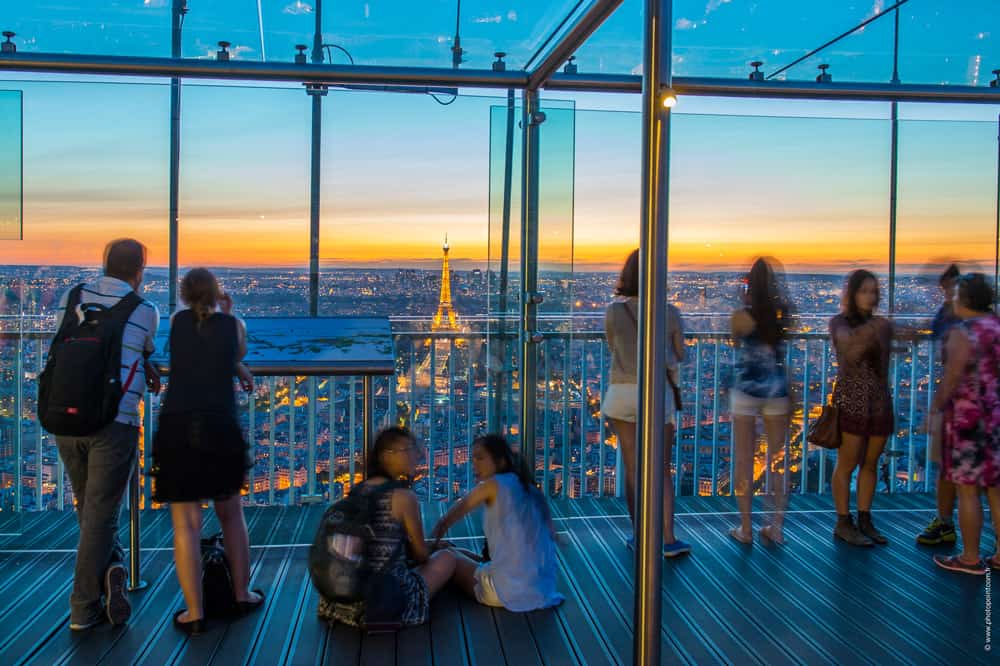 The project of the tower was criticized for several years before its construction actually begun. It was considered to be too tall, but André Malraux, the former Minister of the Culture, granted the permit for the construction. The Montparnasse Tower was inaugurated in 1973 and is one of the tallest towers in Europe. The tower is 210 meters tall.

One has to admit that it is kind of an ugly gray skyscraper, but it definitely offers an incredible over Paris! You can climb up to the very top of the building for a price of 18 euros and 15 euros for students and young people. At the Montparnasse Tower, you will have the choice between staying on the 56th floor where there are large windows for you to enjoy the view of Paris or climbing the stairs to reach the roof with the amazing 360° view of the city. On the roof, if there’s no rain or fog, an amazing experience and the best photos are guaranteed! There also are some telescopes at your disposal for you to use and have a look at the sky.

One of the other advantages of going to this landmark is the fact that there will be no queueing line! You won’t have to wait for hours as you would at other landmarks in Paris! The Montparnasse Tower is definitely one of the best places to enjoy Paris from above! In case you’re wondering what to do in the area around the Montparnasse Tower, this article will give you a few suggestions! 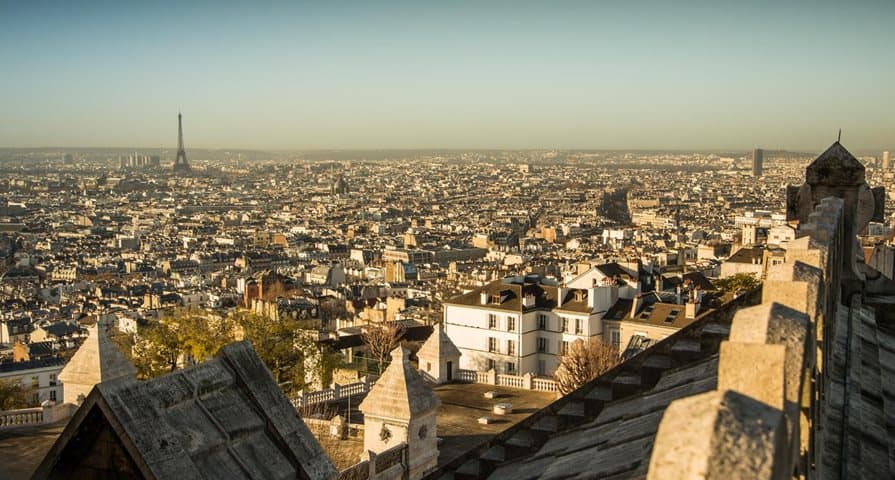 The Sacre-Coeur is undoubtedly one of the most impressive places to enjoy Paris from above. I have to say that it probably is my favorite place to have a peaceful moment and to admire the city. Located at the top of the hill of Montmartre, at a height of 130 meters, it is the second highest point of the city. I explain why in this article, where you also learn a lot more about this monument and its history.

The atmosphere of this place is so soothing and peaceful. You will love to enjoy one of the highest points in Paris from there! Apart from the view, there usually are some street artists that also give a special charm to the place. If you want to visit the dome of the Sacre Coeur to enjoy a spectacular view over Paris, you have to buy the tickets on site. 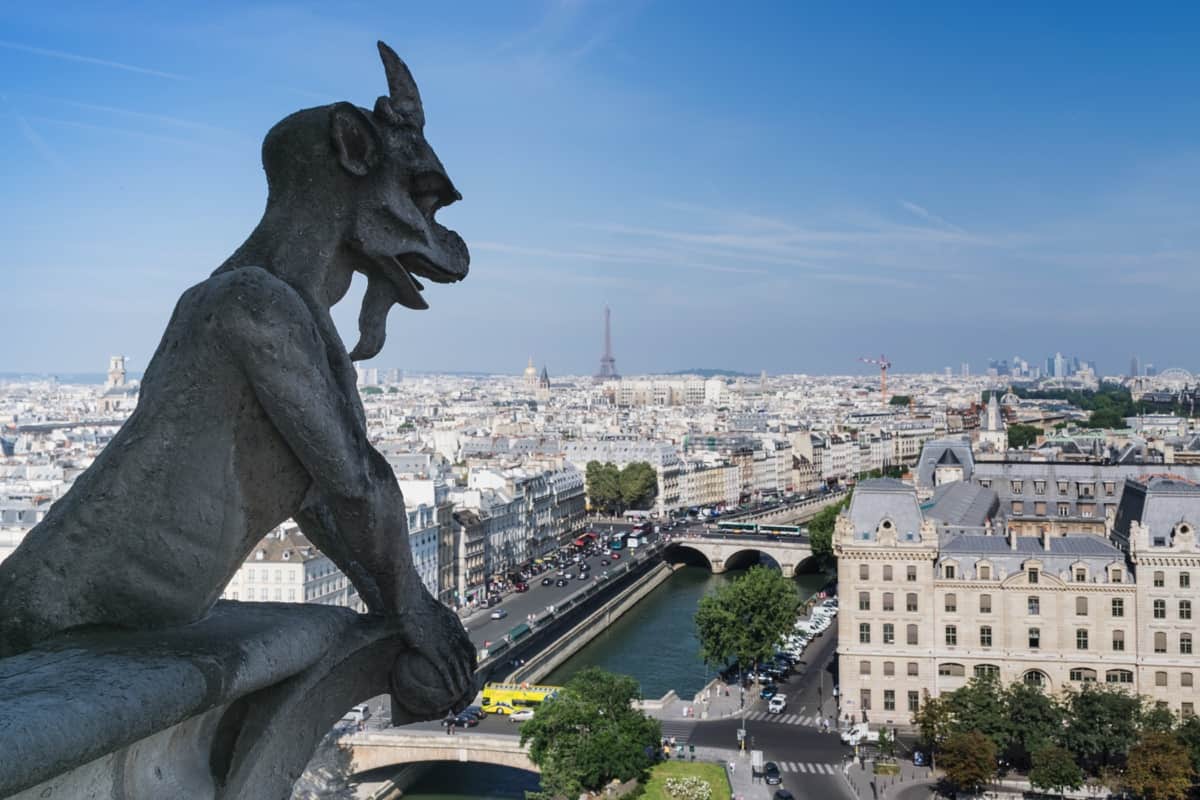 Built between 1163 and 1245 on the City Island, the Notre Dame Cathedral is one of the oldest Gothic cathedrals in the world. Its name means “Our Lady” and is dedicated to the Virgin Mary.

This cathedral is one of the best places to enjoy Paris from above thanks to its two towers that are 69 meters tall. You can access the towers from the right side of the cathedral, but since there are no elevators, you will have to climb almost 400 steps. If you plan on getting up the towers, get there early in the morning so you don’t queue for two hours. The price for adults is 8.50 euros. It is free for children and for Europeans citizens aged between 18 and 25 years old.

On the top floor of the Pompidou Centre in the Marais neighborhood, you will reach the height of 42 metres. 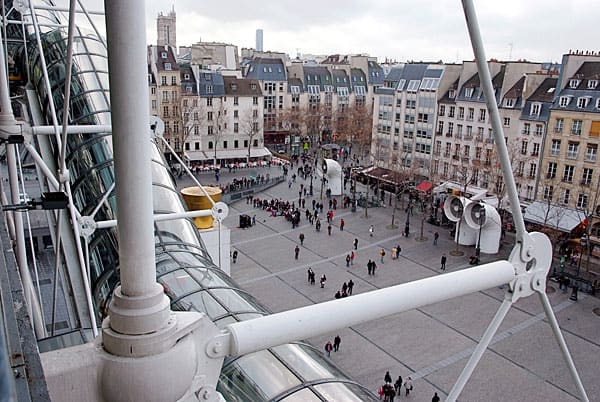 In 1969, Georges Pompidou, who was president of France, decided to order the construction of a modern cultural institution in Paris. He loved culture and art, especially modern art! He wanted a place where arts, literature, design, cinema and music would be mixed together. We can say that the Pompidou Centre was born out of his love for arts and culture in general. In 1977, it opened its doors.

There’s no way you can miss the Pompidou Centre in Paris fourth district. The modern art museum was designed by Renzo Piano and Richard Rogers, for an architectural design competition. The two architects wanted functional structural elements, such as electrical wires and pipes, to be part of the aesthetic of the building. This is the reason why the Pompidou Centre has such a unique and recognizable look!

The ticket that gives access to the museum and to the exhibitions costs 14 euros for adults. If you want a ticket just to enjoy the view over the city, you will have to pay 5 euros. Note that the museum is closed on tuesdays. This is one of the highest points in Paris I find the most interesting, since it allows to see the contrast between the old Paris and some aspects of modernity of the city.

You now know how to enjoy Paris from above and its 5 highest points! I would still be glad to hear about your own thoughts. Let me know what are your favorite places in Paris to enjoy the view. Don’t hesitate to contact us if you need further information about anything! I hope to see you soon in one of our tours!

highest points in ParisParis from above