Top 10 Nairobi Landmarks and how to see them 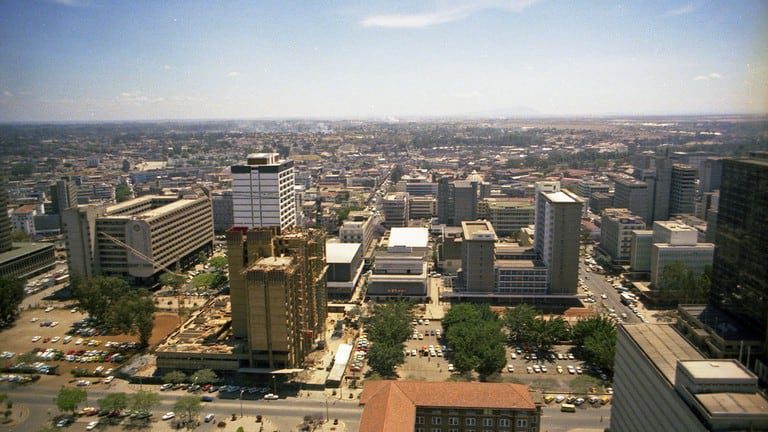 Top 10 Nairobi Landmarks and how to see them

Nairobi is a beautiful city in Kenya. Being its capital city, there is a lot to see and a lot to get through especially if you are only visiting for a short period and want to make the most of your time here.

When strolling and exploring, it helps to know some landmarks so you can decide if you want to start with these or they can act as your guide within the city and its environs.

Let’s look at some of the many Nairobi landmarks and how to see them. 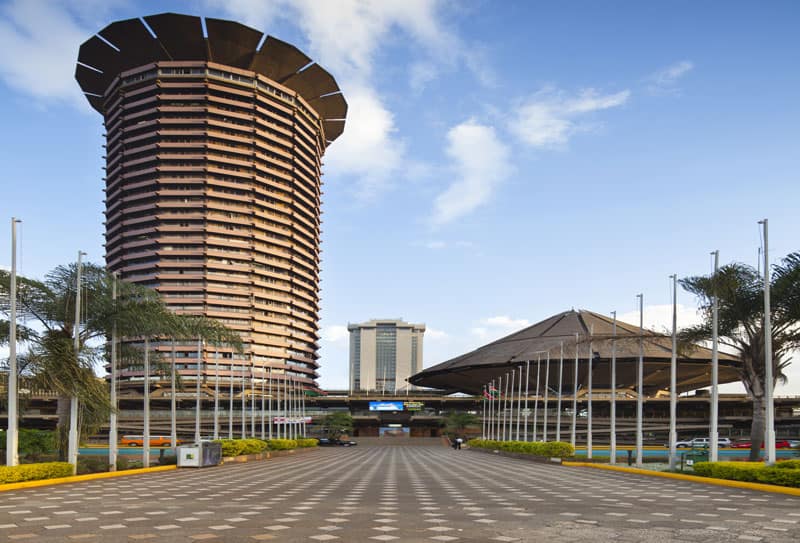 Previously referred to as the Kenyatta International Conference Centre, this is one of the tallest buildings located in the heart of Nairobi. It is a host of many high-profile events and conferences taking place in Africa, and is close to a number of big international hotels in Nairobi.

But more importantly is the top of this famous building… the KICC helipad. This is where you get a chance to see almost all of Nairobi because of the height of the building. The view is breath-taking and really beautiful, giving you the chance to see the city from different angles.

Best time to visit would be over the weekend, as it can be quite busy during the week.

How do you get to the top?

Simply show your identification document (Identification Card for Kenyan nationals and Passport for tourists) and pay an entrance fee at the bottom of the building reception, and they will direct you to a lift that will take you to the 27th floor in about 30 seconds or less, then you climb the stairs to the helipad that is on the 32nd floor.

You can also opt to have a guide that will give you the history of the building, at a small fee. 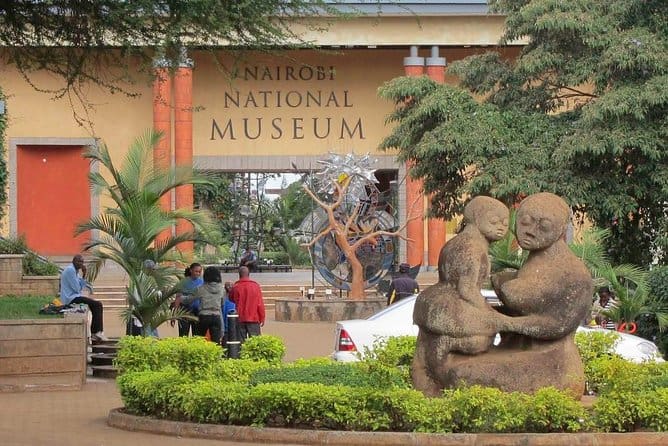 The Nairobi National Museum is a world class museum that presents Kenya’s history, culture, nature, among other things. The museum collects, preserves, studies, documents, and presents Kenya’s past and present, for the purpose of enhancing knowledge.

Located at the Museum Hill – just a few minutes’ drive from the Nairobi Central Business District, the museum also has a variety of shopping and dining facilities for visitors, and a botanical garden that gives space for relaxation.

You are also allowed to take photos which a plus for those visiting!

There is also an entry fee charged at the gate as follows:

You can have a guided tour with one of the many volunteer guides who will mostly be lingering at the entrance to the museum. They offer the tours in English, French and possibly other languages too, free of charge, but with an expected tip at the end.

The All Saints Cathedral is a lovely old Cathedral located in Nairobi, just a walking distance from the Central Business District.

It is built in an English Gothic style with a ribbed ceiling, interior arches, stained glass windows and stone walls, making it a very artistic and interesting building.

It was founded by the Anglican Church and is used for religious gatherings for Christians as well as community social services. 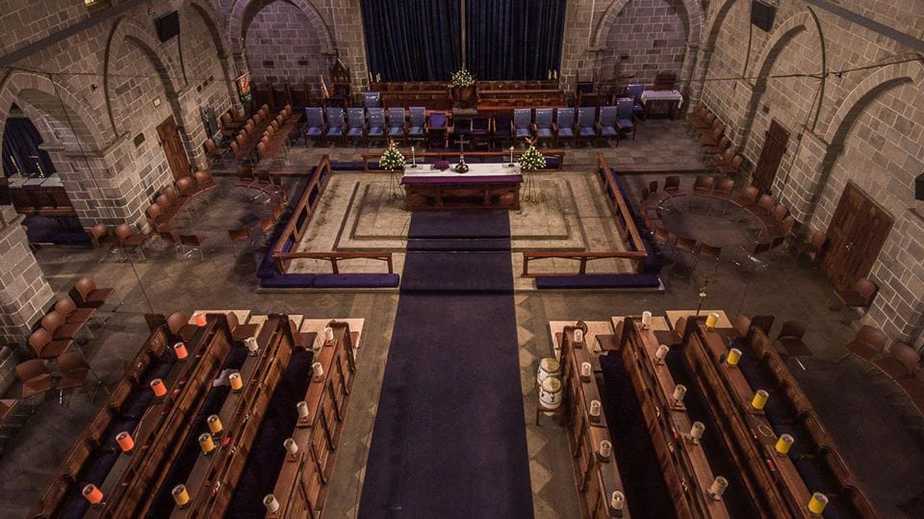 Services here are attended by Heads of States, Heads of International organizations, and other dignitaries, including those visiting Kenya/ Nairobi.

The Church conducts services every day in English, and has a main service on Sundays. 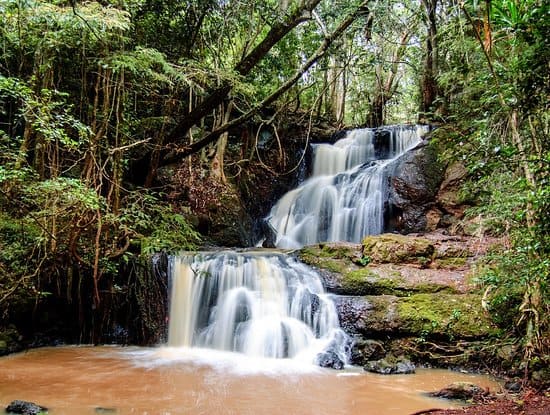 The Karura forest is an urban forest on the outskirts of Nairobi, managed by the Kenya Forest Service and the Friends of Karura Forest Community Forest Association.

The Forest is allegedly one of the largest gazetted forests in the world, within city limits.

It is great for anyone looking for a place to hike, cycle, sit, enjoy some team building activities, or take a walk with family and friends. In fact, there are always people walking their dogs, jogging or cycling most times of the week.

The Forest trail (marked) will take you to a waterfall, and there are caves hidden throughout the trail, apparently used by the Mau Mau.

The management does not allow plastics, so careful with whatever you pack and how you pack it, and be mindful of the environment.

To get to the Forest, you can use Limuru road from the city centre, up to where the Belgian Embassy is located. The forest will be on the opposite side of the road. You can also use the Kenya Forest Service main gate that is off Kiambu road and opposite the Criminal Investigations Divisions (CID) headquarters, or the old Kiambu gate located on the old Kiambu road. Using matatus (Kenya public transportation), take either matatu number 106, 107,108,100,120. Nairobi also has uber services among other ride hailing companies with mobile apps. 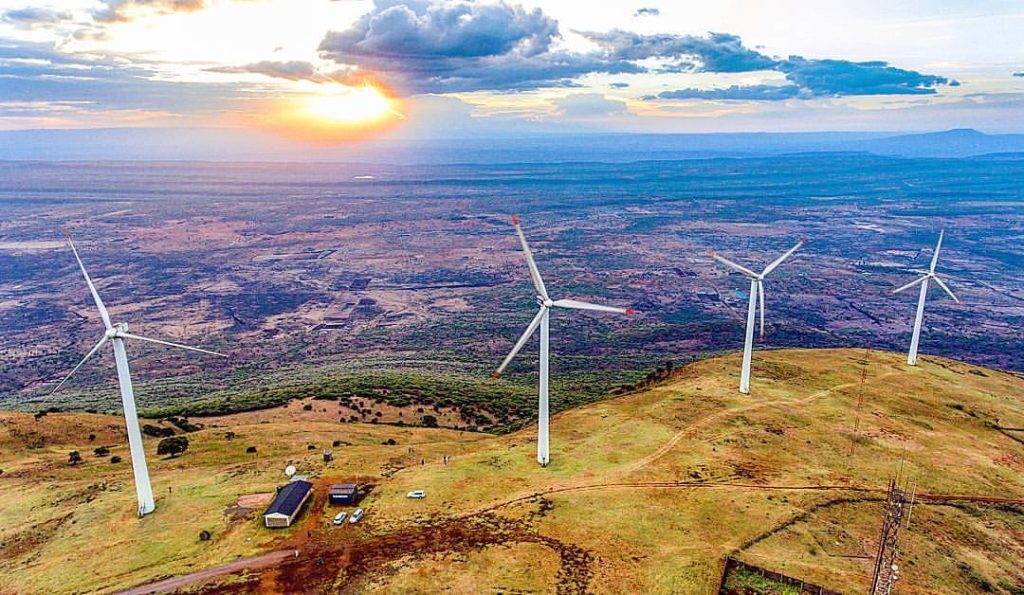 The Ngong Hills Wind Farm is a wind-powered station in Kenya, located in the northern foothills of Ngong Hills near Ngong town, Kajiado County.

It attracts many visitors especially because wind farms are not a common sight in East Africa, which means it’s not only visited for its beautiful sights with all the wind turbines, but also for learning purposes.

The Power Station was initially commissioned in 1993 with two wind turbines donated by the government of Belgium. The two turbines would later retire leading to a second commissioning in 2009 after an installation of new hardware.

At the start of 2013, the Kenya Electricity Generating Company began adding new turbines and by 2015 when the work was finalized, the power station’s generation capacity had increased from 5.1 to 25.5MW.

The wind farm is a great place for those who want to hike and enjoy wonderful views, away from the hustle and bustle of the city. 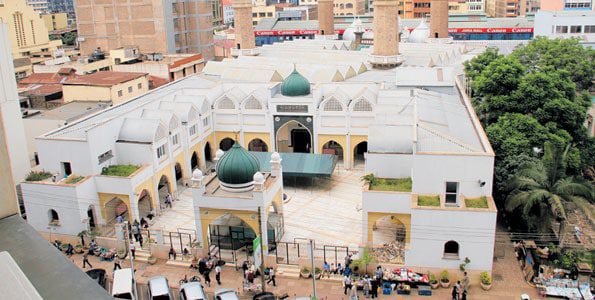 Photo by by Diana Ngila

Jamia Mosque is one of Kenya’s most prominent religious structures, and the largest and most popular mosque in the country. People come from all over Kenya for prayers here.

Located between Banda Street and Kigali road and next to the City Market, the Mosque features twin minarets and three silver domes, a classic Arabian Muslim architecture with marble used in many of its spaces and inscriptions from the Quran all over the building.

The Mosque also has a row of shops down on one of its sides that provides rental income for its upkeep.

Non-Muslims are very rarely allowed entry into the Mosque, but they can still enjoy exterior views from the streets. 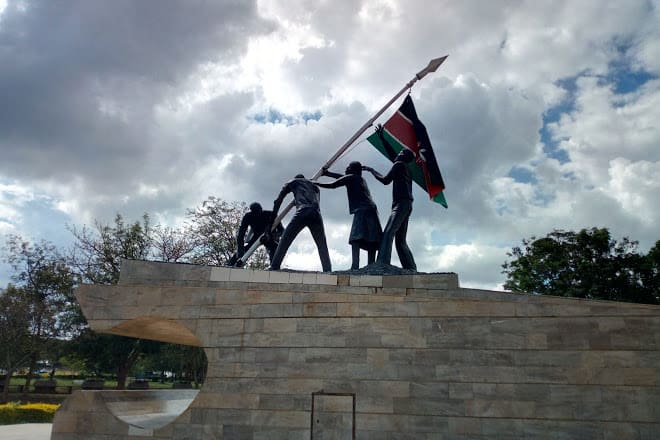 “Uhuru” is a Swahili word that means “Freedom”. And so the Uhuru Gardens Memorial Park, the largest memorial park in Kenya, was created as a commemorative park to celebrate Kenya’s independence from the British Empire in December of 1963. It is where Kenya’s first flag was raised.

Located in Lang’ata and along Lang’ata road, just a short distance from the Central Business District in Nairobi (about 15 minutes without traffic), the Park features a large, fairly clean and safe ground lined with paths and a lake at the centre. The Park also has two monuments on site, and a Mugumo (fig) tree.

The commemorative monument represents the struggle for independence and the other monument is a fountain that marks 25 years of “Uhuru”.

The commemorative monument is defined by a 24-metre high triumphant column that supports a pair of clasped hands and a dove of peace. One side of the monument also features a statue of freedom fighters raising the Kenyan flag.

The Mugumo tree was planted on the spot where the British flag was brought down and the Kenyan flag first hoisted.

Other famous attractions in Nairobi including the Nairobi National Park, the David Sheldrick Trust, the Bomas of Kenya, and the Giraffe Centre are just a short distance from this Park.

The Park opens daily from 8.00 am to 6.00 pm and is open and free to the public, but you have to show an identification document (National/ Student ID or passport). 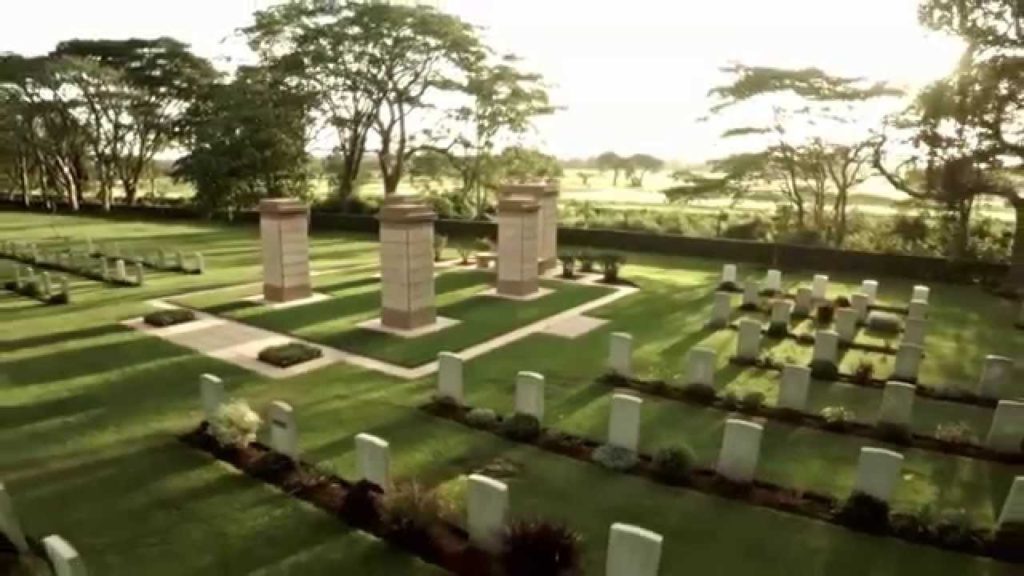 The Nairobi War Cemetery is one of the 1075 million World War graves that are spread throughout the world. It is the biggest war cemetery in Eastern Africa. Located about 13 kilometers from the Nairobi Central Business District, the Cemetery contains 1,952 Commonwealth war graves of which 11 are unknown. It also has 89 non-war graves.

You can find the Cemetery along Ngong Road, between the Ngong Forest Sanctuary and Dagoretti’s furniture makers, as you head towards Karen estate. It is adjacent to Nairobi Race Course, and can be accessed by way of a long driveway off Ngong Road, with the turning being indicated by a CWGC direction sign.

The Cemetery features sharply-manicured green lawns and beautiful flowers next to each grave. 1960 of the graves therein belong to Army soldiers, 63 belong to Air-Force soldiers, and 12 belong to Navy soldiers.

It is also defined by a memorial that takes the form of a tall pier surrounded by four columns of light pinkish artificial stone, with bases and capitals of a darker color on which names are carved.

The Cemetery is maintained by the British, Australian, Canadian, Indian and South African governments.

It is open every day between 6.00 am and 6.00 pm and is open to the public. However, visitors are advised to be careful and not carry any valuables while visiting the cemetery as there has been reported attacks in the vicinity of the cemetery. You are also advised to drive into the compound and not walk the 1km just to be safe. 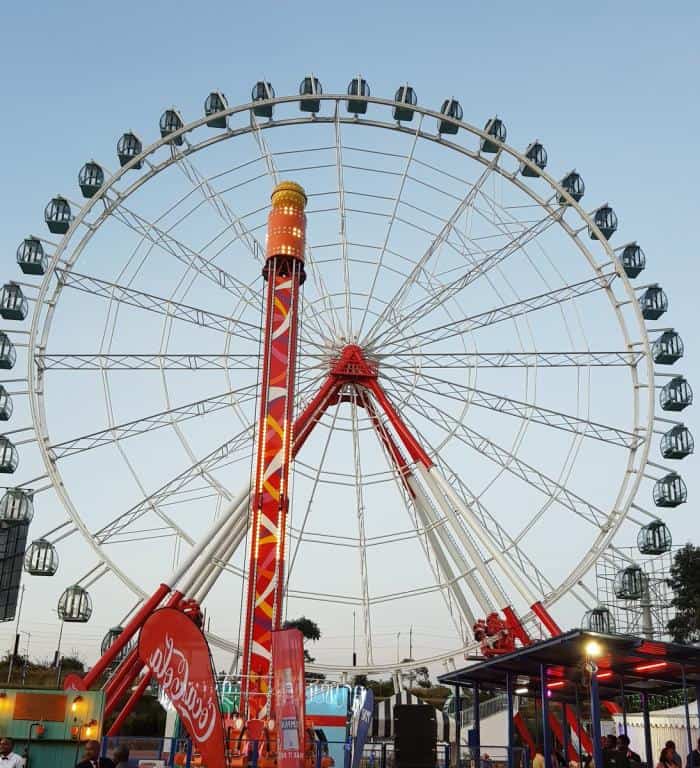 The Eye of Kenya is Kenya’s largest observation wheel located at the Two Rivers Mall on Limuru Road. It is also Africa’s tallest Ferris Wheel, offering panoramic views of Nairobi. It is a 60 meter high wheel with 40 fully enclosed air conditioned capsules that sits an estimated 6 passengers each.

It was constructed to give visitors exceptional views of Nairobi, and is quickly becoming popular with both locals and visitors alike.

The Ferris Wheel rotates constantly and at a very slow pace, allowing riders to get on and off without stopping. A complete ride is about 17 minutes long. 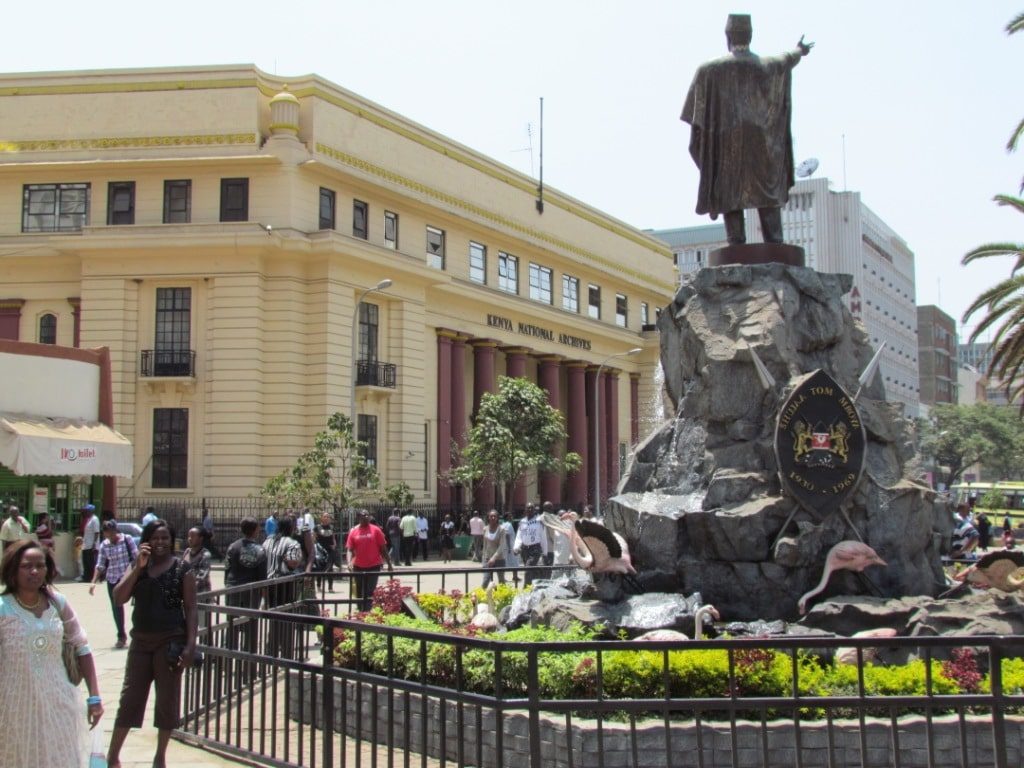 The Tom Mboya statue is a bronze structure that was erected in 2011 in honor of Tom Mboya, one of Kenya’s heroes who was assassinated in 1969, in broad daylight.

It is located along the Moi Avenue, one of the popular streets in Nairobi Central Business District, and stands at about 10 meters high, and about 50 meters from where Tom Mboya was murdered.

The statue is defined by a carved image of the late Mr. Mboya, wearing flowing African attire and his trademark cap.

The best times to see, enjoy and take photos of the statue would be on Sundays when the streets are not too crowded. 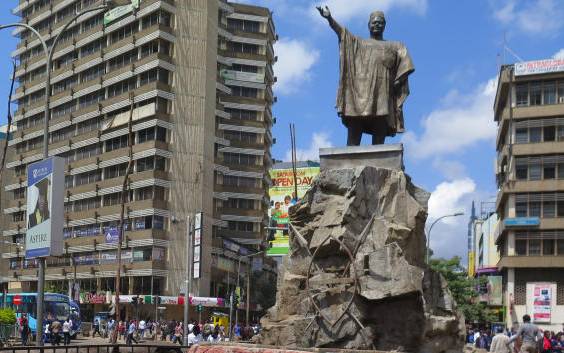 Photo by the Standard

There you have it! My top 10 Nairobi landmarks and how to see them. There are many more, but you decide where to start.