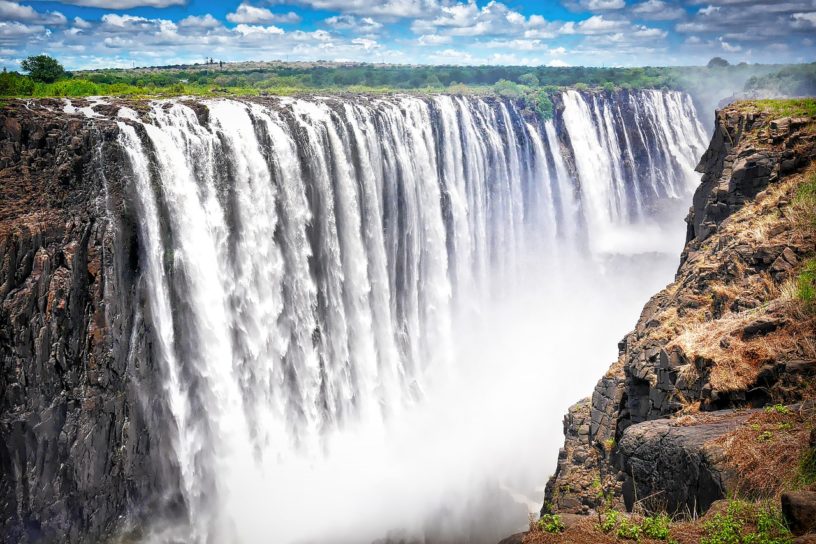 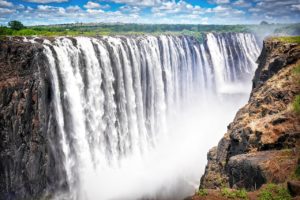 A trip to Victoria Falls is a must when you visit southern Africa. Also known as “Mosi oa-Tunya” (meaning, ‘the smoke that thunders’), Victoria Falls is positioned almost exactly halfway along the mighty Zambezi River’s journey from its source to the sea. Here, the river plunges headlong into a vertical chasm spanning the full width of the river. This mighty river creates the biggest curtain of falling water in the world and is one of the natural wonders of the world, which are seven in total. The power of the falls is incredible, with the highest ever flow recorded in 1958. Water levels reached more than 700 000 cubic meters of water a minute. The water in the gorges rose 60 feet above its average flood level. The falls are an increasingly popular tourist destination. There are several unique aspects to the region, which perhaps further explains its appeal. Here are the top 10 facts about the Victoria Falls some may surprise you or even encourage you to visit the location for yourself.

1. Victoria Falls is along of the Zambezi River. 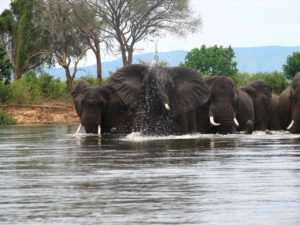 The Zambezi River, the fourth-largest in the African continent, spans across six different nations. The rivers’ incredible journey spans an impressive 2,700 km. On the way there you see a range of wildlife and take part in a plethora of activities. Victoria Falls divides the upper and middle parts of the Zambezi.

2. There is an ongoing debate on which side is best to view the falls, Zimbabwe or Zambia?

There is an ongoing debate as to which side of the Victoria Falls is best to view the breathtaking display. 75% of Victoria Falls can be seen from Zimbabwe, while the remaining 25% is visible from the Zambian side. Most people will concur that the best view is from Zimbabwe. The site here allows you to view about two-thirds of the falls.

However, to see the moonbow, the view from Zambia is better from the Eastern Cataract where the moon rises. Also, this side tends to dry up first when the water levels of the Zambezi River drop later in the season.

3. It is a World Heritage Site.

In 1989, the Victoria Falls became a World Heritage Site — This means it belongs to all the people of the word, irrespective of the territory on which the World Heritage site is. Over the last 70+ years, the governments of Zambia and Zimbabwe have been considering building a dam in the Batoka Gorge. When completed, it would be Africa’s largest hydropower dam, built over a 10 to 13 year period and costing more than US$ 4 billion. The waterbody will be long and narrow, stretching to 1 kilometre from the plunge pool of the Victoria Falls.

At the Victoria Falls gorge, a spray forms from the falls and is lifted upward by currents of air that ascend from the bottom. As the spray rises, the small droplets condense and fall, creating the localized areas where it appears to be continually raining. The clouds of spray are often seen from miles away, although the height and visibility vary significantly due to local conditions, and of course the volume of the Zambezi’s flow.

5.The Moonbow at Victoria Falls. 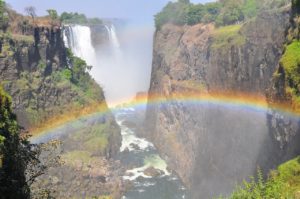 Victoria Falls is one of the very few places in the world where this natural phenomenon can be seen with ease and regularly. A moonbow or lunar rainbow forms as light refracts due to the ever-present water particles from the spray of the falls in the air. This phenomenon is at its best during high-water, from April to July, with a cloudless sky and full moon. The moonbow happens when light reflects to create the moonbow which always occurs in the air opposite the moon. Depending on where you are standing it’s fainter due to the low amount of light reflected from the surface of the moon — the human eye may find it quite difficult to distinguish the colours of the moonbow. The view is not bright enough to excite the human eye colour receptors, and for many, the moonbow appears to wash out white. A photograph with a long exposure will capture the colours of a lunar rainbow.

In 1855, British explorer and evangelist, David Livingstone, was the first European to witness the splendour of one of Africa’s incredible sights. He named it for the British monarchy. While many places have reverted to their native names, the local people had so much respect for him that it has remained unchanged.

7. It is a part of two famed parks

The Victoria Falls is a part of two national parks. The first, fouMosi-Oa-Tunya National Park (a UNESCO World Heritage Site) whose name means ‘the smoke that thunders’ – a perfect analogy for these awe-inspiring manifestation. The second park, unsurprisingly, is the Victoria Falls National Park.

8. Victoria Falls is among the world’s Seven Natural Wonders

Seven Natural Wonders is an organization that protects and promotes the natural wonders of the world. It’s easy to comprehend why millions trek across the globe to explore Mother Nature’s most magnificent sites, as chosen by CNN, an American news-based television channel, and the Seven Natural Wonders organization in 1997. The other natural wonders of the world are Aurora Borealis, the Harbour of Rio de Janeiro, Parícutin, the Grand Canyon, the Great Barrier Reef, and Mount Everest. 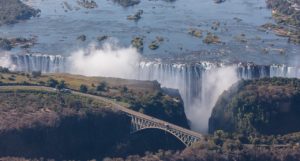 The Victoria Falls’ bridge completed construction in April 1905 on the orders of Cecil John Rhodes who wanted to connect Cape Town to Cairo with one railway line. The bridge designed by George Andrew Hobson from London is 650 feet long, with a central arch spanning 500 feet. Rhodes wanted the deck built, just a little below the Boiling Pot, where the spray of the falls would land on the passing trains.

Before the Victoria Falls bridge construction, the Zambezi River had to be navigated either by dugout canoe or a barge on a steel cable. The crossings made from Old Drift, which is upriver from the falls because of the dangers faced from the strong currents as the water rushed over the falls. The video below gives a short insight into the bridge’s history. 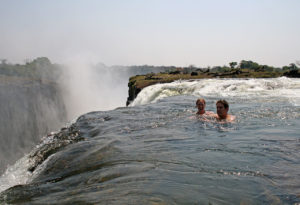 In the drier months of September to December, the level of the Zambezi River drops considerably allowing daredevils to swim to the very edge of the Victoria Falls in a naturally formed pool overlooking the side. The swimming area is made by a rock wall that halts the current just enough for a swim.

Now you know the top 10 facts about Victoria Falls. I hope you enjoyed reading this article.