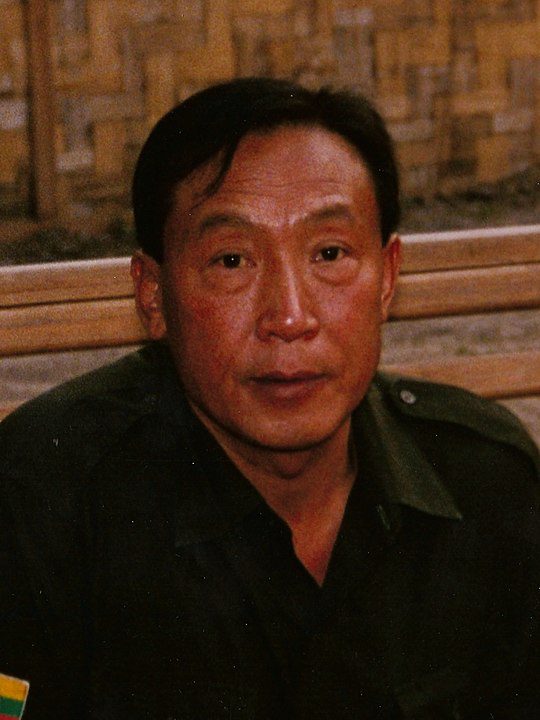 He was known primarily by his Chinese name Zhang Qifu. He had no formal education.

Sa received military equipment and training from both the Kuomintang and Burmese armies. He later fought for the independence of Shan State and established his Independent territory.

Khun Sa was an ethnic Chinese drug lord. He was dubbed the Opium King in Myanmar. He engaged in a massive Opium smuggling operation in the Golden Triangle.

Khun Sa was the dominant opium warlord from approximately 1976 to 1996. He received support from both the Thai and Burmese governments at various times.

However, the American Drug Enforcement Administration uncovered and broke the link between Khun Sa and his foreign brokers. This led him to surrender to the Burmese government in 1996.

He disbanded his army and moved to Yangon with wealth and Mistresses. Nevertheless, some of his forces refuses to surrender and continued fighting the government.

Khun Sa engaged in legitimate business projects after retirement from drug trafficking. The businesses were mining and construction.

1. He Received No Formal Education but had Military Training

Khun Sa was born to a Chinese father and a Shan mother. However, at the age of three, his father died. His mother married a local tax collector, but two years later she died as well.

He was raised by his Chinese grandfather, who was the headman of the village, Loi Maw. Khun Sa had no formal education however, his stepbrothers were sent to missionary School. The only Formal education Khun received was as a boy.

This is when he spent a few years as a Buddhist novitiate. He remained functionally illiterate for the rest of his life.

In the early 1950s, he received some Military training as a soldier. He was trained by the Chinese Nationalist forces that had fled into Burma. This was after the Victory of Mao’s Communists in 1949.

2. He Formed his First Independent Band of Young Men at the Age of sixteen 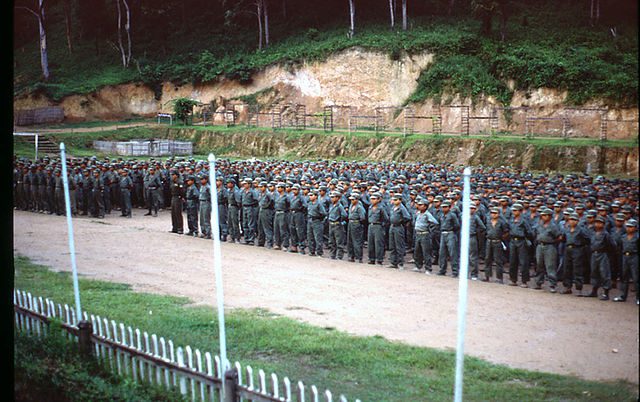 After his military training, he formed his first independent band at the age of 16. The band had young men.

The organisation grew to several hundred men. He became independent of the Kuomintang. This enabled him to frequently switch sides between the government and various rebel armies.

3. The Government Allowed Him to Grow and Trade Opium and Heroin

Khun Sa reformed his army into a local Home guard unit in 1963. This was under the control of the northeast command of the Burmese army. Which was based in nearby Lashio.

Khun Sa went against the local Shan rebels. In return for fighting the rebels, he was allowed by the government to use their land and roads to grow and trade opium and heroin.

Moreover, the government allowed them to be financed by opium production. The Burmese government hoped that the local militia units could be self-supporting.

Unfortunately, Khun Sa and his military were supported by other governments. The military used its profits from the opium trade to buy large supplies of military equipment.

They purchased them from the black markets in Laos and Thailand. The military was better equipped than the Burmese army.

By the 1960s, Khun Sa became one of the most powerful militia leaders in Shan state. He restricted the movements of local communist rebels since had an important pass in Loi Maw.

During the period, he was nominally supporting the Burmese government. However, he maintained with Kuomintang intelligence agents.

4. Khun Sa was One of Burma’s most Notorious Drug Traffickers

Throughout the 1960s, he became one of Burma’s most notorious drug traffickers. He challenged the local dominance of the Kuomintang remnants in Shan state.

However, in 1967, he was defeated in a battle that involved both the Kuomintang and the Laotian army. The battle took place on the Thai-Burma -Laos border.

In that battle, he led a convoy of 500 men and 300 mules into Laos. Unfortunately, the convoy was ambushed by Kuomintang forces.

This defeat demoralized Khun San and his forces. His military strength declined after the Laotian army continued to attack his mule trains.

5. His Arrest and Charge of Treason for Contacts with Rebels

In 1969, a local ethnic rebel group ( Shan State Army) attempted to pursue him to join him. Khun Sa expressed interest and a meeting was arranged.

However, the details of the meeting were discovered by the Burmese army. This led to his arrest on October 29, 1969.

He was arrested at Heho airport in Taunggyi while returning from a business trip in Tachilek, near the Thai border.

After his arrest, he was charged with treason for his close contact with the rebels. However, he was not charged with drug trafficking since had government permission to do so

He was imprisoned in Mandalay. While in prison he developed a political philosophy that he exercised later in life. This is after reading Sun Tzu’s the Art of War and Luo Guanzhong’s Romance of the Three Kingdoms.

The political philosophy stated, “In politics, there are no lifelong friends and no lifelong foes. They change according to the gains and losses. A good leader must be able to take advantage of every change and utilize it.”

During his arrest, his militia unit dissolved. However, his more loyal followers went underground and managed to abduct two Soviet doctors. The doctors were working from a hospital in Taunggyi.

Several soldiers from the Burmese army were tasked to rescue the doctors. Unfortunately, the plan failed.

However, the doctors were ransomed for Khun Sa’s Freedom. He was subsequently released in 1974. His release was secretly brokered by Thai General Kriangsak Chomanan.

Khun maintained a good relationship with the Tai general after his release. Moreover, he secretly contributed $50,000 US to support him in a Thai election campaign, in 1981.

Additionally, after his release, Khun sa went underground and reformed his forces in Ban Hin Taek. He renamed his group the Shan United Army.

Khun Sa was responsible for 45% of that trade. The Drug Enforcement Administration rated his heroin as 90% pure and the best in business.

Furthermore, in the 1980s he controlled 70% of the opium production in Burma. He went ahead and built a large-scale infrastructure of heroin refining. This was to enable him to dominate the market for that drug.

8. His Notoriety Led the American Government to put a $2 Million Bounty on Him 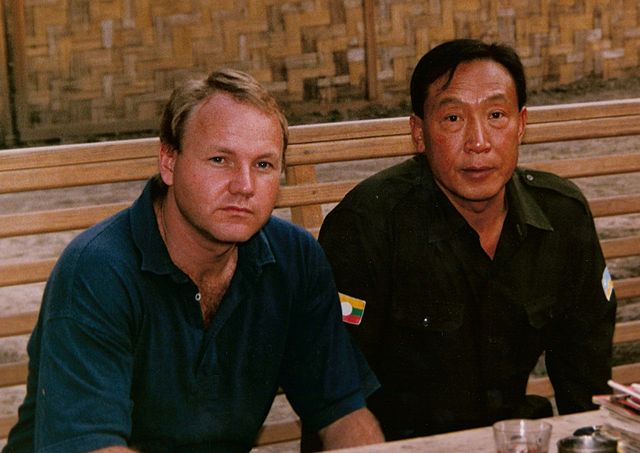 Khun Sa once supplied a quarter of the world’s heroin supply. Moreover, He commanded 20,000 men, and his army was better armed than the Burmese military.

This led the American government to put a $2 million bounty on him. The American diplomat to Thailand referred to him as “the worst enemy the world has”.

Moreover, a 39-man unit of Thai rangers and local rebel guerillas tried to assassinate him. This was at the insistence of the US Drug Enforcement Administration. The attempt failed. Nevertheless, almost the entire unit was wiped out.

In January 1982 a 1,000-man force of the Thai Army appeared at the borders of his base area. The force consisted of Thai rangers from Pak Thong Chai, local paramilitary border police from Tak, and several aeroplanes and helicopter gunships.

The battle lasted for four days, and both sides sustained casualties. At the end of the battle, Khun Sa was forced to retreat into Burma.

9. The Burmese and Thai Governments were Cooperating with Him

In 1985, Khun merged his Shan United Army with the Tai Revolutionary Council of Moh Heng. They formed the Mong Tai Army. Through the Alliance, he expanded the Thai-Burma border from his base at Ho Mong to Mae S.

However, the Americans donated several million dollars to the Burmese Government. The funds were to help the drug suppression.

However, the Burmese military released false reports that they had attacked and defeated Khun Sa. The battle involved thousands of Burmese and Thai soldiers.

However, no action was taken against him. In reality, the Burmese and Thai governments were cooperating with him to build a highway in the region that he controlled.

The Burmese army conducted anti-narcotics operations at the time in other areas. Nevertheless, Khun’s area was not targeted.

In the 1990s Khun’s power and influence started to decline. This was the result of other openings of new trade routes for heroin from Yunnan to ports in southeastern China.

Other drug trafficking routes opened up to them India, Laos and Cambodia. This reduced his importance as a middleman along the Thai border.

Additionally, his surrender to the Burmese government also caused a lack of support from other Shan leaders.