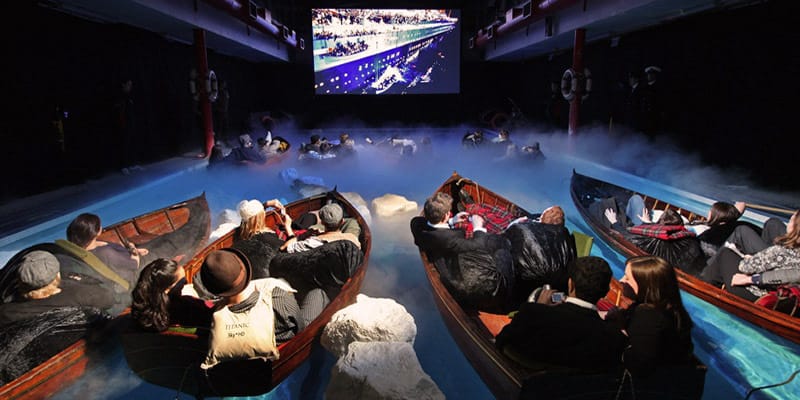 Baz Lurhmann’s beautiful film takes place in the Moulin Rouge, the most famous cabaret of Paris (Read our article about cabaret shows in Paris) that is located on 82, Boulevard de Clichy, on the 18th district in Montmartre. Therefore it is the most famous movie location in Paris.

The movie narrates the love story between Christian (Ewan MacGregor), a young English writer, and cabaret actress and courtesan Satine (Nicole Kidman) during the end of the 19th century. There are no courtesans anymore in the Moulin Rouge, but you can still enjoy the representation of the “French Can-Can” dance, as seen in the movie.

The movie recreates the atmosphere of the cabaret, with rich well-dressed men coming to mingled with the underworld. Famous artists from Montmartre are also represented, like the painter Toulouse-Lautrec. Moulin Rouge! also features scenes from the roofs of Paris, showing landmarks like the Sacré-Coeur and the Eiffel Tower.

In Inception, Cobb, the character played by Leonardo DiCaprio, comes to Paris to find a new “architect” for his team (Ellen Page). When he first shows her his talent, they find themselves on the Bir-Hakeim Bridge. This bridge appears in other scenes of the movie, when Cobb remembers the time he spent there with his dead wife (Marion Cotillard). This bridge linking the 16th and 15th districts also offers an amazing view of the Eiffel Tower.

The character Amélie, who decides to make other people happy, is a waitress in Montmartre in a café called Les Deux Moulins (if you want to discover Montmartre, read our popular article). This café is located on 15 rue Lepic in the 18th district, and now also is considered one of the most famous movie locations in Paris. The greatest aspect of the movie is that it takes place in Montmartre practically the whole time. For instance, Amélie intends to meet her love interest on the stairs leading to the Sacré-Coeur.

All the scenes of the movie Ratatouille takes place in Paris. It features views from the rooftops of Paris, scenes on the river banks, and on the Pont d’Arcole. The restaurant of the Chef Gousteau is actually a famous French restaurant called La Tour d’Argent (“Silver Tower”, in English) located at 15, Quai de la Tournelle, in the 5th district.

The display in front of which, Remy, the rat stops because he is horrified by the view of dead rats exists too! It is on rue des Halles, in the 1st district and was founded in the 18th century.

The interesting “The Hunchback Of Notre-Dame”

The Disney movie inspired by Victor Hugo’s book takes place in the Notre Dame Cathedral. Quasimodo lives in a Tower of the Cathedral, which you can actually visit if you go at the top of Notre-Dame (more information). The inside of the church seen in the movie is also realistic as you can see below.

The Notre-Dame Cathedral may not have changed, but Paris has. In the movie, you see Paris during the Middle Ages. Such houses cannot be found anymore near the Cathedral, but you can still see two of them in the Marais, a neighbourhood in the 3rd district of Paris (read more about this trendy area).

The nice “Everyone Says I Love You”

Everyone says I love you is the first Woody Allen movie that was set in Paris. The movie takes places in New York, Venice and Paris, three very romantic cities (learn more about the romantic Paris). In one of the scenes, you can see Woody Allen walking with a typical French baguette. He is on the Pont au Change in the 1st district. The character is also said to have a house in Montmartre in the Cortot street, which is briefly seen in the movie.

The insightful “The Devil Wears Prada”

In The Devil wears Prada, Amanda comes to Paris for the Fashion Week. An important scene shows her throwing her phone in a fountain. This fountain is located in my favourite place in Paris: the Place de la Concorde in the 8th district.

The funny “Sex And The City”

I know this is not exactly a movie, but after 6 seasons, I consider it to be very meaningful that the finale of the most famous TV show about fashion, takes place in Paris. Carrie decides to move to the capital of fashion, but her long time love M. Big comes to declare his love to her and to take her back to New York. They kiss on the Pont des Arts. It is a very well-known bridge because lovers put locks on the bridge as a symbol of their love.

The delightful “Midnight In Paris”

This movie is an ode to Paris. The character played by Owen Wilson travels through the Paris of today and that of the 19th century. The ending scene, where he meets up with a Parisian girl he met in Montmartre takes place on the bridge Alexandre-III. It was built in 1900 for the Universal Exhibition, and I personally think this is the most beautiful Paris bridge (more beautiful bridges)!

At the beginning of Da Vinci Code, the murder victim is found in the Grand Gallery of the Louvre Museum (more information about the Louvre). This is where the investigation begins and also where it ends, but I will not say more for the sake of those who have not seen the movie yet! 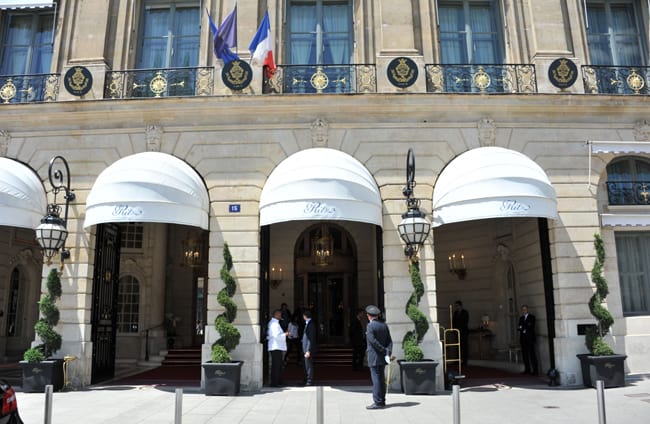 When he is staying in Paris, Robert Langdon in Da Vinci Code has a room in the Ritz, Paris’ most famous hotel. So does Miranda, the character played by Meryl Streep in The Devil wears Prada!