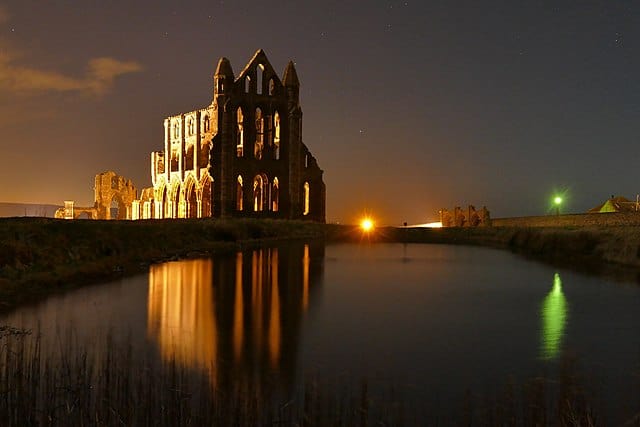 Whitby Abbey by night.jpg This is a photo of listed building number. Photo by Steveriley39 - Wikimedia Commons 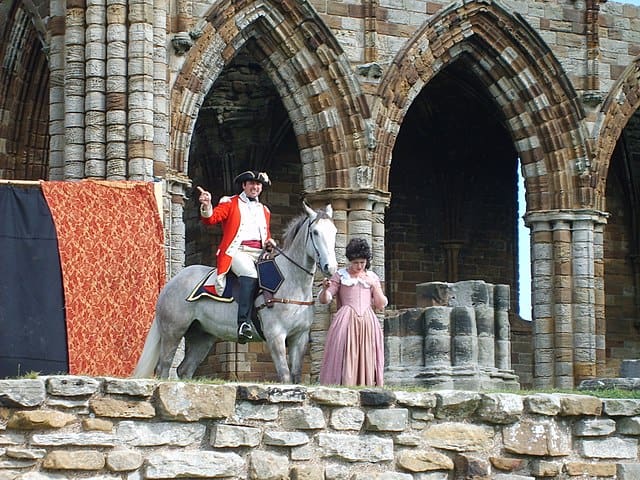 Whitby Abbey was a 7th-century Christian monastery that later became a Benedictine abbey. The abbey church was situated overlooking the North Sea on the East Cliff above Whitby in North Yorkshire, England, a center of the medieval Northumbrian kingdom.

The abbey and its possessions were confiscated by the crown under Henry VIII during the Dissolution of the Monasteries between 1536 and 1545.

Since that time, the ruins of the abbey have continued to be used by sailors as a landmark at the headland. Since the 20th century, the substantial ruins of the church have been declared a Grade I Listed building and are in the care of English Heritage the site museum is housed in Chomley House.

Whitby is a unique town with an atmosphere like no other. A short stroll around the cobbled streets will quickly give you a sense of the history that is encompassed in the seaside town. Here are 9 mind-blowing facts about Whitby that you may not have known.

1. Whitby was the inspiration for the novel Dracula 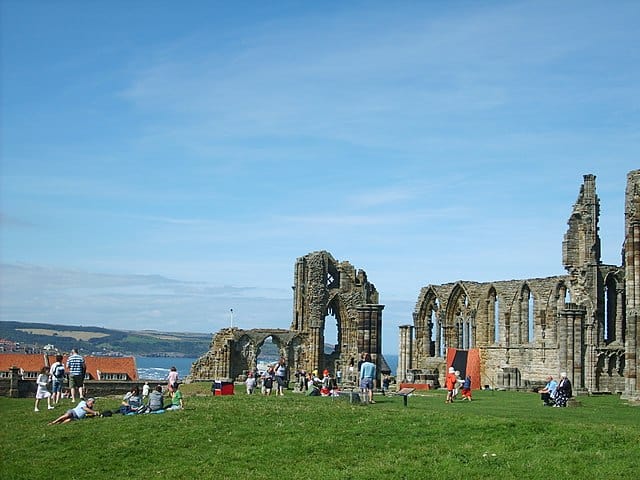 Many visitors who come to Whitby are shocked at the Gothic nature of some of the shops. Many do not realize that Whitby has close connections to the novel Dracula and that Bram Stoker stayed in Whitby while writing parts of the famous novel. Stoker was inspired by the moody atmosphere of the town and took inspiration from landmarks such as Whitby Abbey, St. Mary’s Churchyard, and the 199 steps.

Today, you can see evidence of the connection between Whitby and Dracula through the gift shops, the Dracula Experience Museum, and the bi-annual Whitby Goth Weekend. 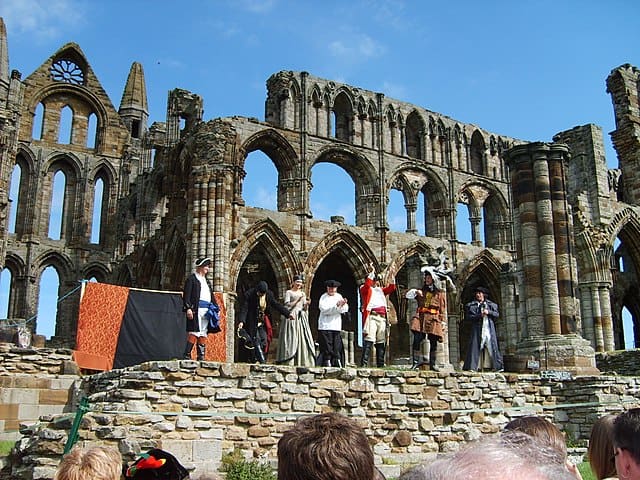 Captain Cook was born not too far from Whitby and he moved to the town to study his seaman’s apprenticeship with John and Henry Walker. It was during the apprenticeship that Captain Cook found his love for the seas, sailing coal ships for the Walkers.

Cook went on to be one of the most decorated explorers of our time and set sail from Whitby during many of his voyages of discovery. Today, you can visit the Captain Cook Memorial Museum located on Grape Lane which was once the house where Cook lived during his apprenticeship.

3. Whitby was once a major whaling port

Whitby Abbey by night. This is a photo of the listed building number. Photo by Steveriley39 – Wikimedia Commons

There are few reminders left around Whitby of its rich Whaling history. Perhaps the most prominent reminder is the Whalebone Arch which can be found on the top of the West Cliff close to the Captain Cook Monument.

Between 1750 and 1840 Whaling was big business in Whitby, with over 50 Whaling ships operating from Whitby Harbour. Many local families became wealthy from the industry and many local men were employed on the Whaling ships.

4. Whitby was bombed during World War 1 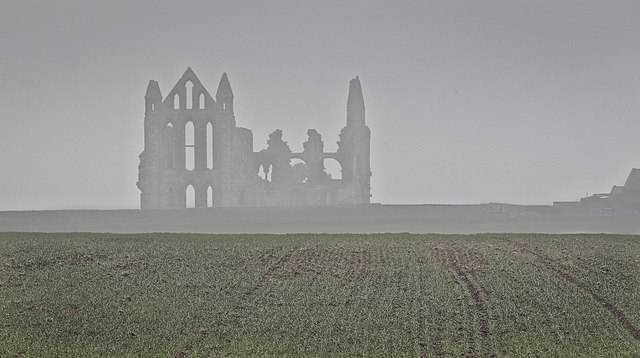 Whitby Abbey in the mist. This is a photo of the listed building number. Photo by RevDave – Wikimedia Commons

On 16 December 1914 Whitby was bombed by the German Navy as part of a coastal attack with also included Scarborough and Hartlepool. The attack resulted in 137 fatalities and 592 casualties, with the vast majority being civilians.

During the attack on Whitby, a coastguard station was shelled along with Whitby Abbey and many other buildings in the town. 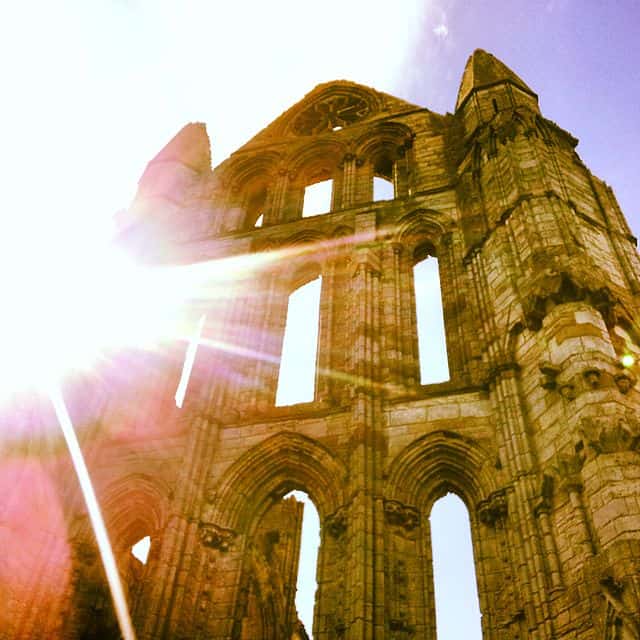 Sunspot Whitby ABbey.jpg
This is a photo of the listed building number. Photo by Boogoid – Wikimedia Commons

You only have to walk around Whitby alone at night to sample the ghostly atmosphere. Whitby even has a couple of people offering ghost walks around the town at night.

There are stories of lost souls, witches, legendary beasts and even the devil himself is rumored to have visited the area!

6. Whitby has the best fish and chips in the UK 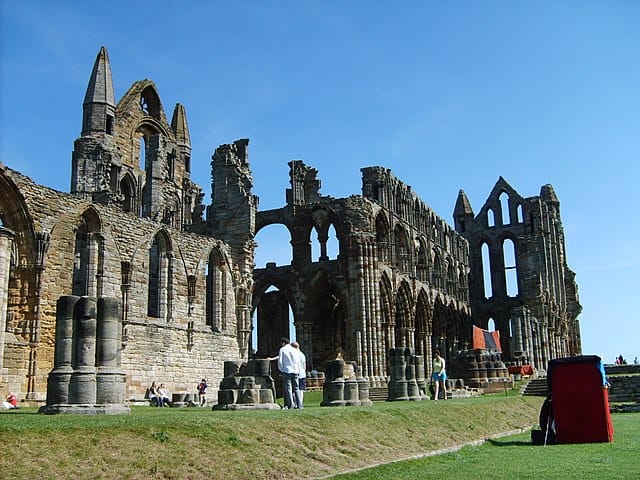 With so many good fish and chips shops in Whitby, it’s hard to pick an outright “best of the bunch”.

Many of the takeaways and restaurants in Whitby have won awards from various organizations over the last few years.  Mister Chips and The Magpie Cafe are well known for the high quality of the fish and chips served. People travel from all over the UK to queue up outside The Magpie for a taste of their renowned fish and chips.

7. Whitby was once a smuggling hotbed. 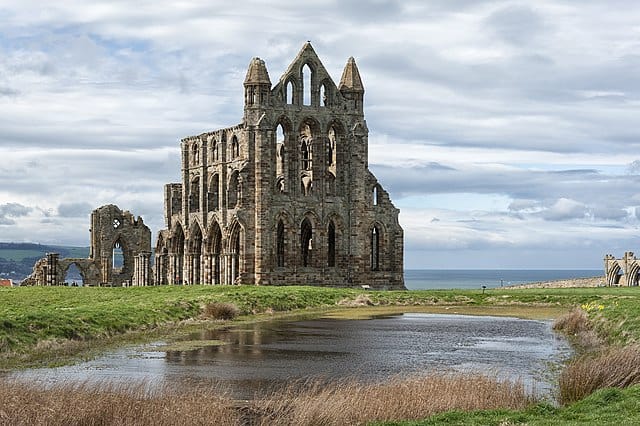 Whitby Abbey ruins, Yorkshire. This is a photo of the listed building number. Photo by
Juliet220 – Wikimedia Commons

Throughout history, men have made a living from smuggling goods and living under the nose of the taxman.

Whitby and the surrounding villages were a hotbed for smuggling for generations, with tales of hidden tunnels and secret societies plenty.

8. Whitby once had a thriving jewelry industry 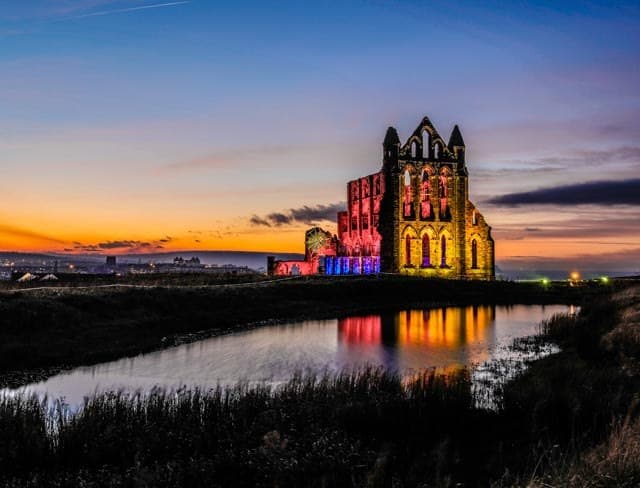 Whitby Abbey Illuminated at dusk. This is a photo of the listed building number. Photo by Sevomidazo – Wikimedia Commons

Between 1850 and 1915 the Whitby Jet Jewellery industry was at its peak. Whitby Jet is a rare gemstone that is found on the coastline around Whitby. Even today, Jets can be found locally on the cliffs. During peak production, the industry employed around 1400 people in the area. Extremely popular in the Victorian era, Whitby Jet was seen as a statement item of luxury jewelry.

During the early 1900s, Whitby Jet was most commonly associated with memorial jewelry, simply because of its intense black color.

9. You can find dinosaurs in Whitby 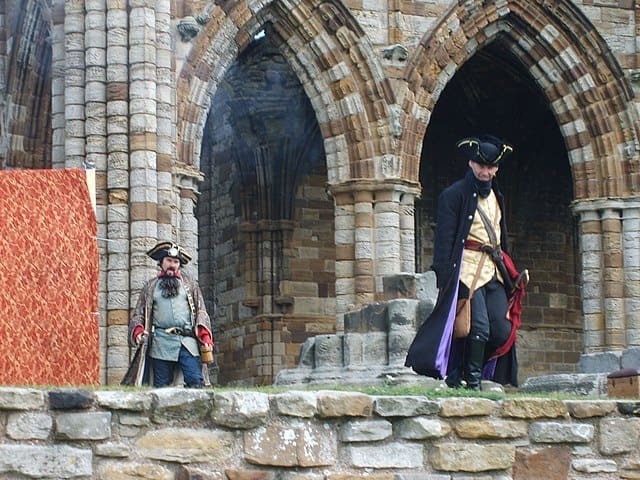 One of my favorite pastimes while in Whitby is fossil hunting. Whitby yields excellent ammonite specimens and dinosaur/reptile remains.

10. There were two forms of Christianity practiced in England when the first monastery was established at Whitby 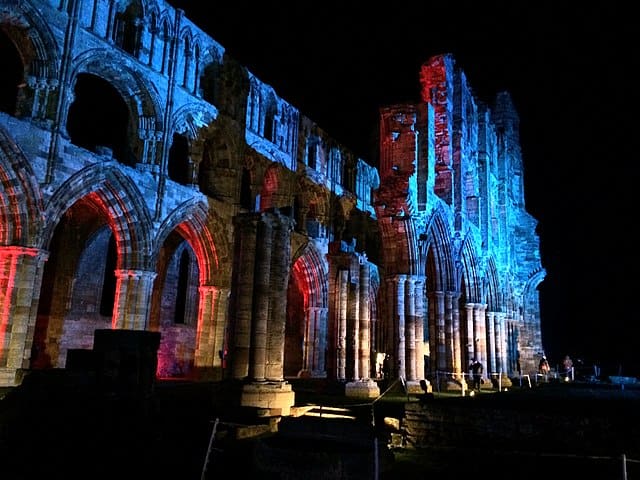 In 657, when the first monastery was established at Whitby, then part of the Anglo-Saxon kingdom of Northumbria, there were two forms of Christianity practiced in England.

Celtic Christianity, claiming its lineage from St. John the Evangelist, was spread by Irish monks of Iona and Lindisfarne (where the famous Book of Kells was created).

Roman Christianity, had been brought by missionaries, like St. Augustine, from Rome. Each denomination had its style of monastic dress and monastic rule and each had a different method of determining the date of Easter.