Top 10 Shows to Watch This Christmas in London 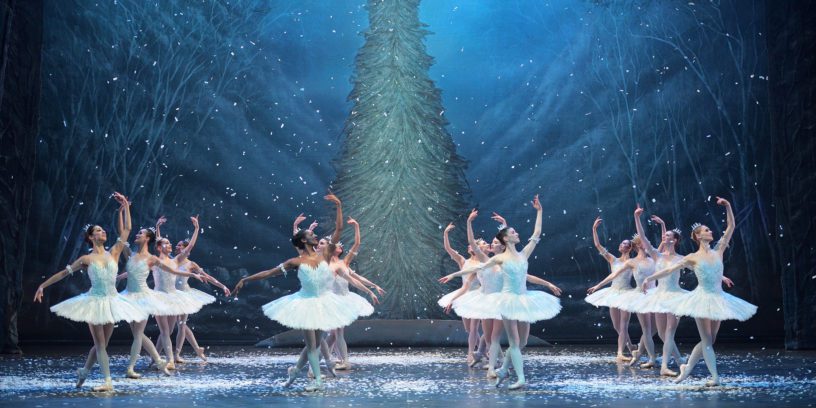 Top 10 Shows to Watch This Christmas in London

London’s West End is always buzzing with activity. However, around the holiday period, everywhere across London becomes busy and some of the most magical shows take place. From Christmas pantomimes and festive ballet, to spectacular Christmas theatre productions and the latest West End shows, there’s plenty to see this winter in London.

There’s something wonderful about getting together to watch a show at some of London’s most iconic venues – The Coliseum, the Royal Albert Hall and Dominion Theatre, to name a few. While the West End provides guaranteed fun, other atypical venues such as the temporary theatre at Winter Wonderland or Alexandra Palace can also surprise you with their unusual setups. We can agree that watching a classic like Peter Pan in the voluptuous interiors of Ally Pally (how Londoners called their beloved Alexandra Palace), can be a delightful winter activity. If you enjoy watching classic Christmas shows, why not join some of these remarkable shows and musicals across greater London?

I’ve compiled a list of shows, locations and prices so you can organise a couple of fun hours singing along some friends and family. Please note that this list of venues is arranged by date and that some of these require booking in advance, so it’s best to not leave things for the last minute. 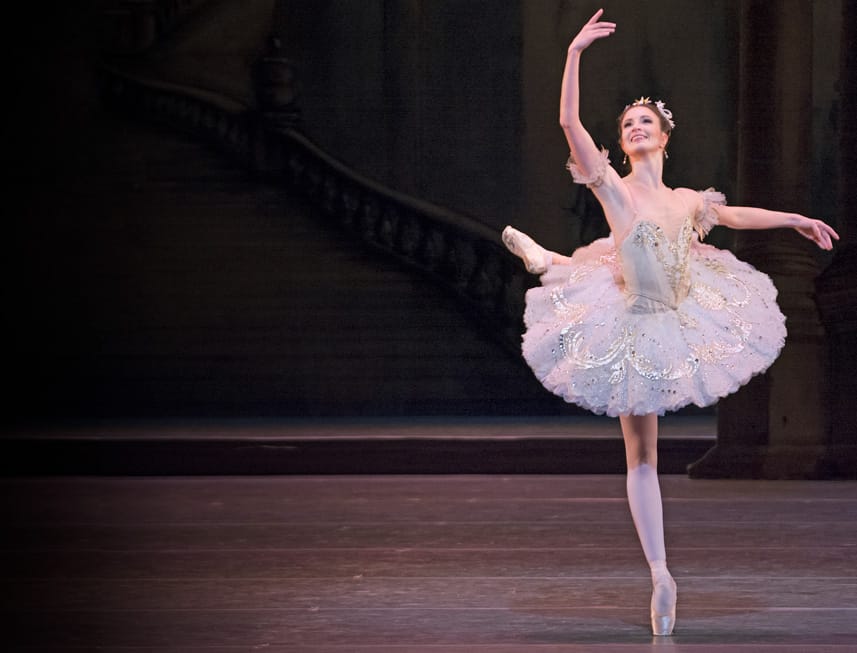 The Sleeping Beauty, with Tchaikovsky’s famous score, is the ballet with which the Company reopened the Royal Opera House in 1946 after World War II. Every Christmas since then, the Royal Opera House entertains its audience with the tale of a princess who pricks her finger on a spindle, falling into a deep sleep which only a prince’s kiss can break.

The Royal Opera House, an 1858 stunning building by Edward Middleton Barry, is located just across the Royal Ballet Building. In 2003, the London architecture firm WilkinsonEyre connected both buildings through a playful bridge. When you visit the opera, don’t forget to look up at the structure hanging above Floral Street. 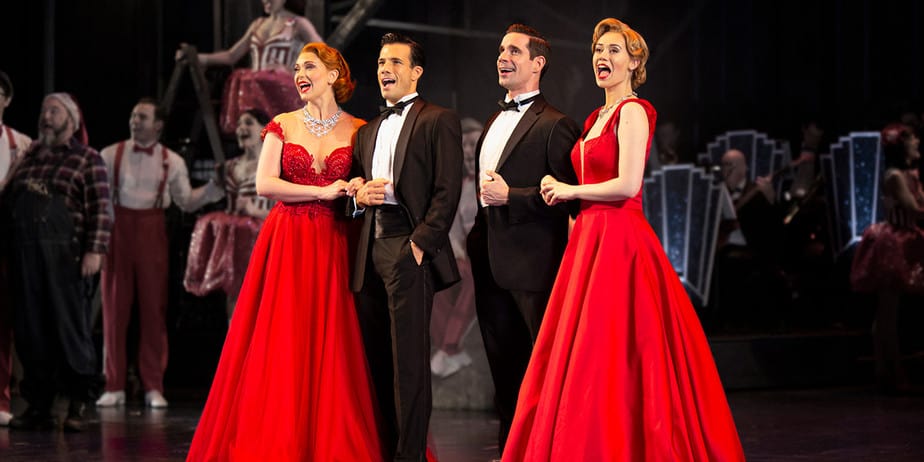 Based on the 1954 film starring Bing Crosby, feel-good festive musical White Christmas tells the story of two war veterans who share a love of music and dance. Set on Christmas Eve 1944 just after World War II, these two war soldiers end up turning Broadway stars. The pair realise that their former commander’s business is in trouble they put on a show at his Vermont inn hoping to save the day… and a Christmas miracle sees them saving the inn. The original movie by Irving Berlin features a number of songs (including, of course, White Christmas) that are then used in the musical.

What I find most striking about the Dominion Theatre is that it was built over a landmark location: The site of the former Horse Shoe Brewery. The 1814 London Beer Flood originated here. 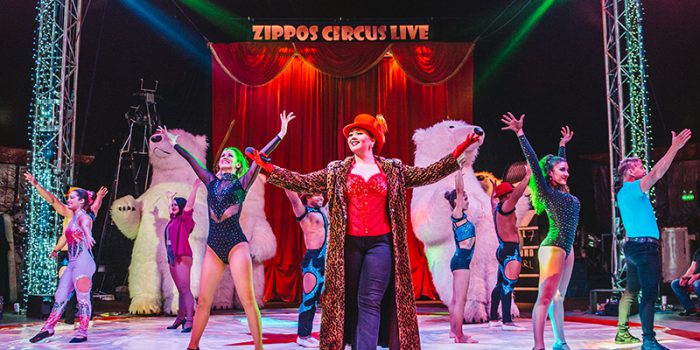 The Circus MegaDome, located inside Winter Wonderland premises, is the most magical of setups for this old-fashioned circus: Ringmaster Paul Winston hosts as aerialists, acrobats, clowning acts and other performers take it in turn to wow the audience. Each show is only 45 minutes long, which makes it ideal for the younger audiences too. Fun fact: The Circus MegaDome is apparently the largest tented structure in the UK

Like every year, Hyde Park’s annual tribute to festive fun opens to delight young and old, locals and visitors worldwide. Besides the circus, the popular festival includes over 200 Bavarian-style chalets, an observation wheel (the tallest in the world) and an ice rink. 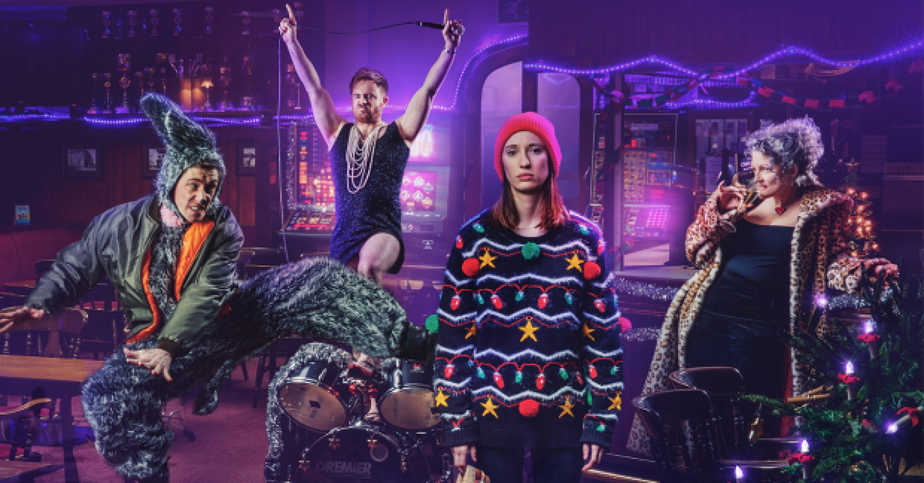 Cinderella at The Vaults is described by its producers as ‘Royle Family meets Elf’, so perhaps is better to let go of any expectations you might have about the original film (and myth). The original tale is about a young woman living in unfortunate circumstances, that are suddenly changed to remarkable fortune. Set up in Waterloo’s vaults, a moody space, expect nothing but a modern, warts-and-all version of the classic fairytale.

By the way, it is believed that a story recounted by the Greek geographer Strabo around 7 BC and 23 AD might have inspired Cinderella. 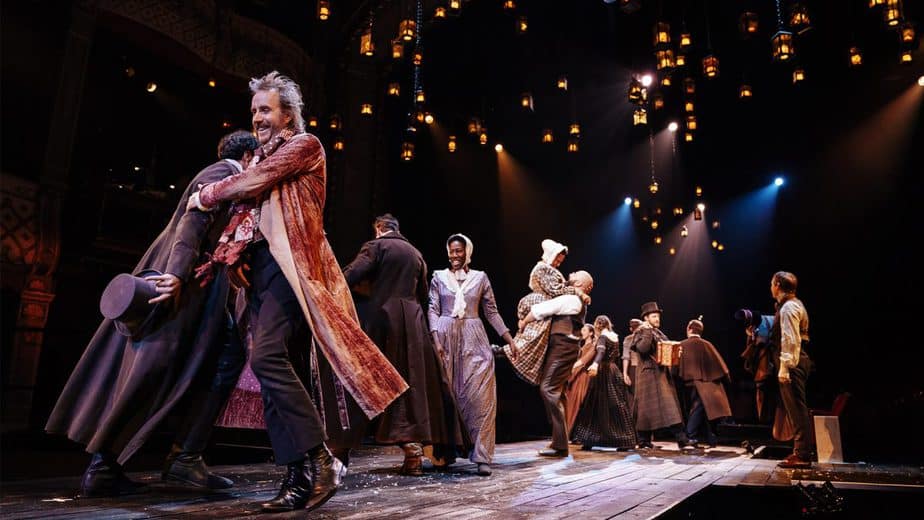 A Christmas Carol is a classic story by Charles Dickens published in 1843. It recounts the unhappy Ebenezer Scrooge, an elderly miser who is visited by the ghost of his former business partner Jacob Marley and the spirits of Christmas Past, Present and Yet to Come. Although by normal terms, this can be the spookiest of stories, the moral is that Scrooge is transformed into a kinder, gentler man.

Although The Old Vic’s production isn’t the only version of it knocking around this Christmas, reputed Jack Thorne (the playwright responsible for adapting Harry Potter and the Cursed Child) has adapted the story for the stage, and the result won’t disappoint you. 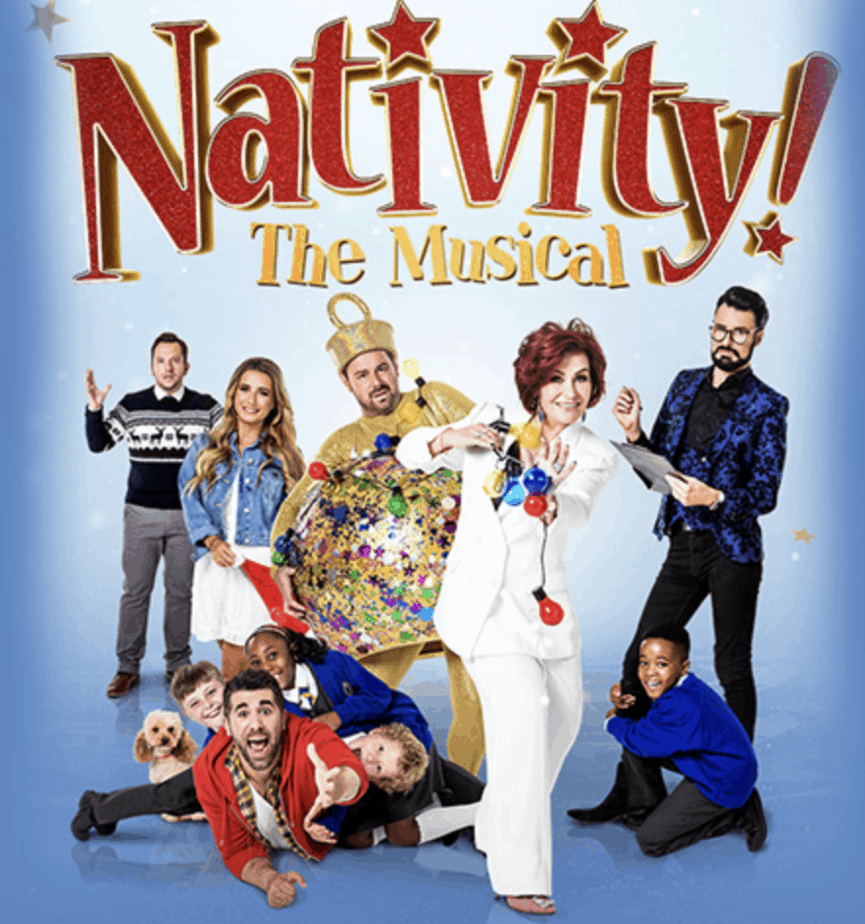 Based on Debbie Isitt’s film Nativity! (2009), this musical follows a Coventry based primary school, St Bernadette’s, where teacher Mr. Maddens and his assistant, Mr. Poppy mount a musical version of the nativity with the students, promising it will be adapted into a Hollywood movie. This show puzzled everyone when it was announced that Danny Dyer was appearing alongside Dani Dyer (of Love Island). Other known actors include Sharon Osborne and Rylan Clark-Nea. 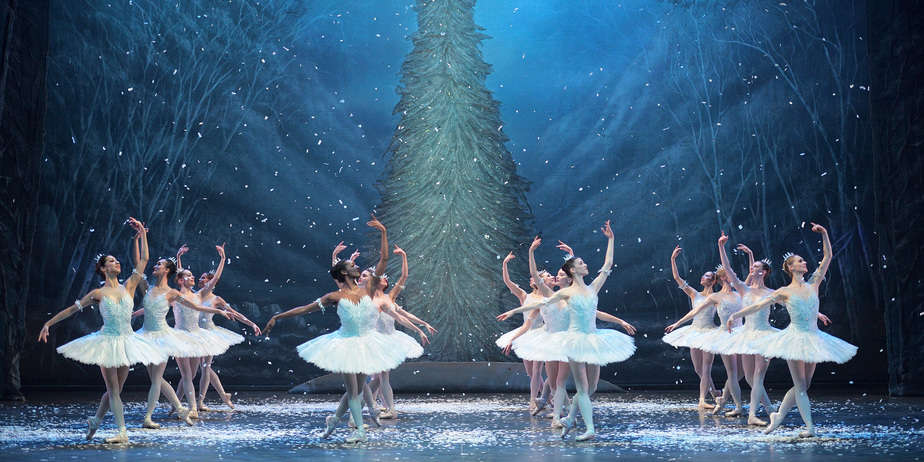 On a sparkling Christmas Eve in a frost-dusted Edwardian London, Clara receives an enchanted Nutcracker as a present. Together, they discover a magical world where she battles with the Mouse King and meets a handsome stranger. This dazzling ballet has delighted audiences at Christmas since 1950. It features more than 100 mesmerizing dancers and world-class musicians from the English National Ballet, stunning sets and Tchaikovsky’s famous score. Join Clara and her Nutcracker doll on a magical Christmas Eve adventure, as they encounter the Mouse King and travel by hot air balloon across London to the frosty Land of Snow. 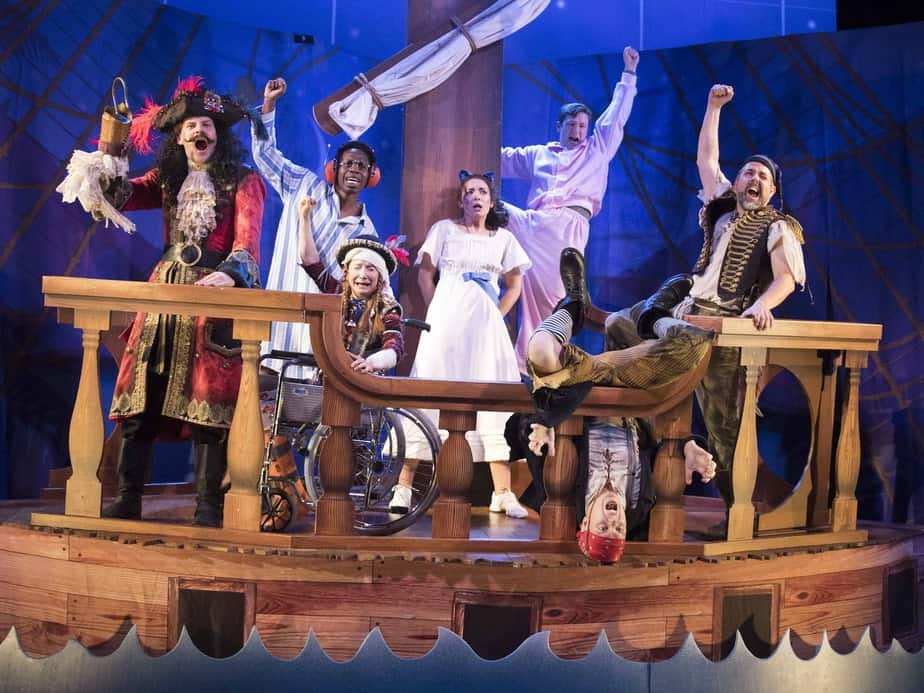 Located at the stunning Alexandra Palace (conceived by Owen Jones in 1859 as the ‘Palace of the People’), Mischief Theatre plays an alternative version of The Boy Who Wouldn’t Grow Up. The company, known the perennially popular The Play Goes That Wrong, takes over the West End classic Peter Pan. Technical hitches, flying mishaps and cast disputes feature in the hilarious play-within-a-play story of a theatrical society attempting to put on a production of the Neverland-based classic. 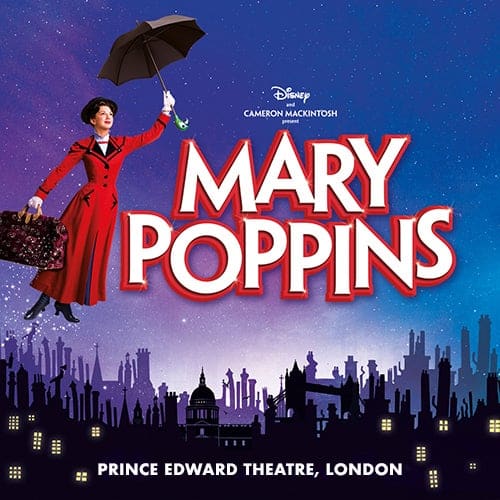 The magical story of the world’s favourite Nanny is triumphantly and spectacularly brought to the stage with dazzling choreography, incredible effects and unforgettable songs. Adapted from the PL Travers stories and Walt Disney film, this enchanting stage musical features classic songs such as Supercalifragilisticexpialidocious and A Spoonful of Sugar. The Broadway version of the show was nominated for seven Tony awards, including Best Musical. 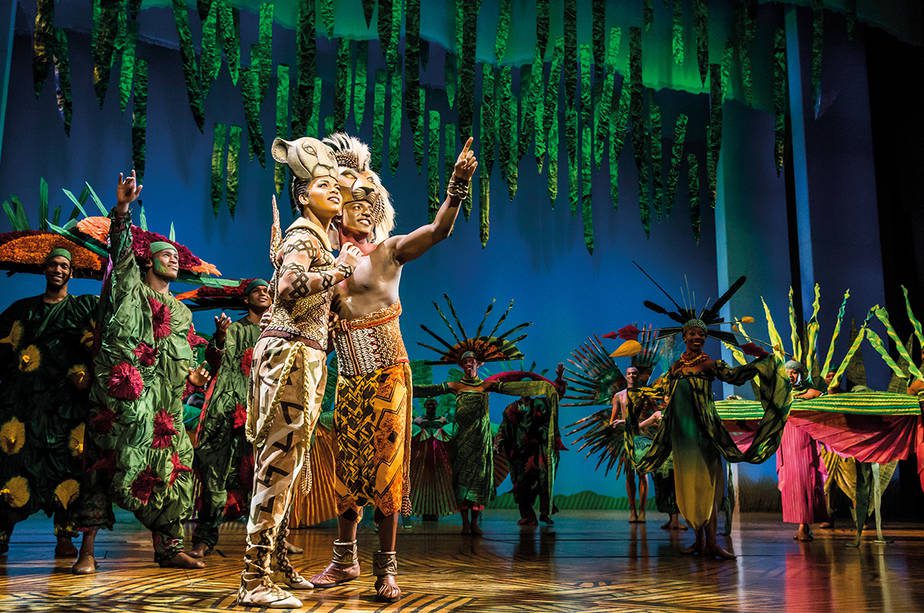 Set against the majesty of the Serengeti Plains and the evocative rhythms of Africa, Disney’s multi-award winning musical The Lion King will amaze you even more during Christmas where you’ll be surrounded by the wow’s and ah’s of children around you. Really, is there anything as magical as this?

I hope you enjoyed this list and are able to go to some of these wonderful shows across London. Make sure you check other Christmas plans, shows and activities in London: