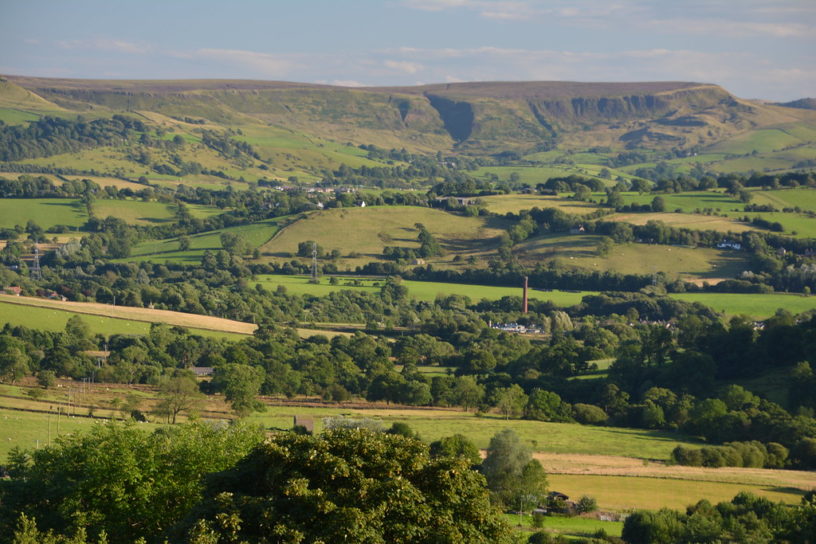 The Peak District is an upland area of more than 550 square miles in England at the southern end of the Pennines. It is mostly in Derbyshire, and extends into Cheshire, Greater Manchester, Staffordshire, West Yorkshire and South Yorkshire.

Peak District National Park includes the Dark Peak, where moorland is found and the geology gritstone, and the White Peak, a limestone area with valleys and gorges.

The park is known to provide a warm welcome to those seeking some of their first inspirational connections with nature by hiking through the beautiful, rugged countryside.

Below, we discuss the top 10 sensational facts about Peak District National Park;

1. Origin of the park’s name 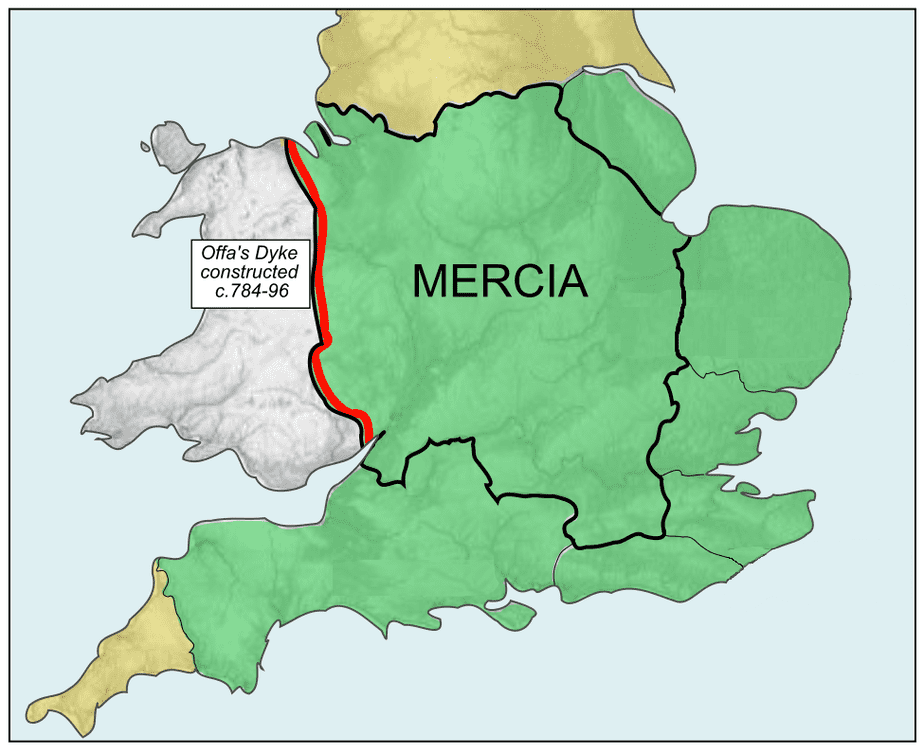 Peak District National Park theoretically got its name from the Pecsaetan or peaklanders, an Anglo-Saxon tribe. They inhabited the central and northern parts of the area from the 6th century CE, when it belonged to the Anglian kingdom of Mercia.

Historically, the Anglo-Saxon period denotes the period in Britain between about 450 and 1066, after their initial settlement and up until the Norman Conquest.

The term Anglo-Saxon began to be used in the 8th century (in Latin and on the continent) to distinguish “Germanic” groups in Britain from those on the continent (Old Saxony and Anglia in Northern Germany).

Barrows from the Anglo-Saxon period are present, including Benty Grange, where the eponymous helmet was found.

2. The first of its kind 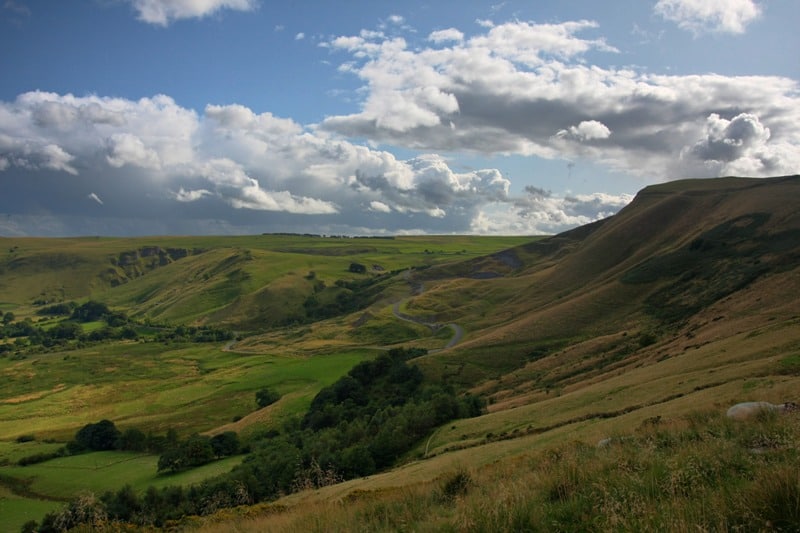 It became the first of the national parks of England and Wales in 1951. In the UK, designation as a national park means that planning and other functions are provided by a national park authority, with additional restrictions that enhance protection from inappropriate development.

As late as the early 20th century, most British countryside lay in the hands of wealthy landowners who restricted or banned public access.

However, the 1932 Kinder Mass Trespass, held at the Peak District National Park, was a milestone event in the campaign that led to increased public land access and the eventual establishment of national parks.

3. Don’t be misled by the name 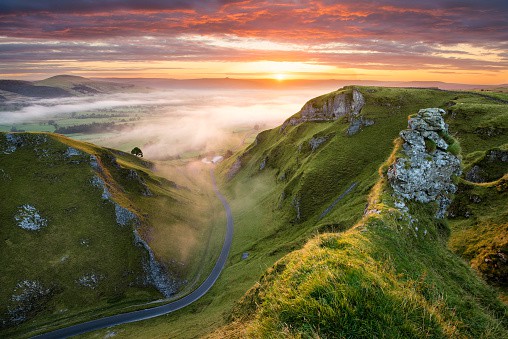 On hearing the name peak we tend to think of the sharp pointed part of a tall hill or mountain however, the park’s landscape has fewer sharp peaks than rounded hills, plateaux, valleys, limestone gorges and gritstone escarpments.

The park can be divided into three sections. The Dark Peak, which is largely uninhabited moorland and gritstone escarpments.

The White Peak, so named for its 300-million-year-old limestone filled with fossilized corals and other seafloor creatures, is a lower region of rolling farmlands.

The South West Peak is a patchwork landscape of moors, woods, and pastoral valleys.

4. There are no actual mountains in Peak District National Park 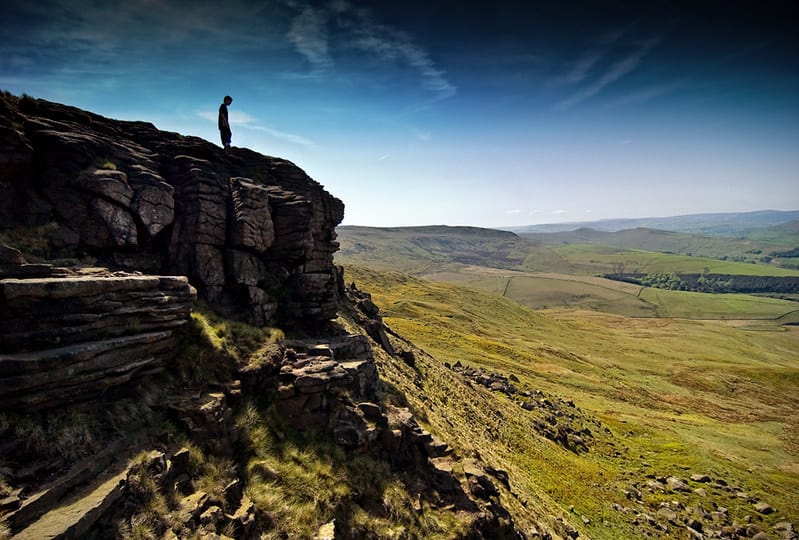 A mountain is an elevated portion of the Earth’s crust, generally with steep sides, that shows significant exposed bedrock. It typically rises at least 300 meters (1000 feet) above the surrounding land.

Kinder Scout is a moorland plateau and national nature reserve in the Dark Peak. “Scout” is an old word for a high, overhanging rock and refers to the cliffs on the western side of the plateau. This summit is sometimes simply called the Peak.

5. Over 90 percent of Peak District is privately owned land 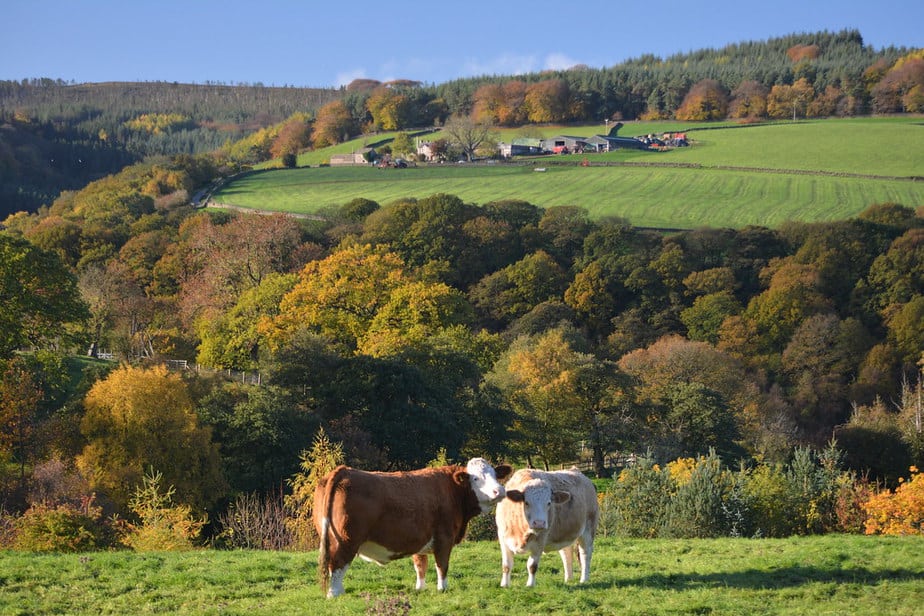 The national park covers 555 square miles (1,440 km2) and it’s a mix of both public and private ownership. About 86 percent of the total is farmland, which is used mostly for grazing sheep or cattle.

The National Trust, a charity that conserves historic and natural landscapes, owns about 12 per cent of the land in the national park.

Three water companies own another 11 percent, while the park authority owns around 5 per cent.

6. Looks can be deceiving 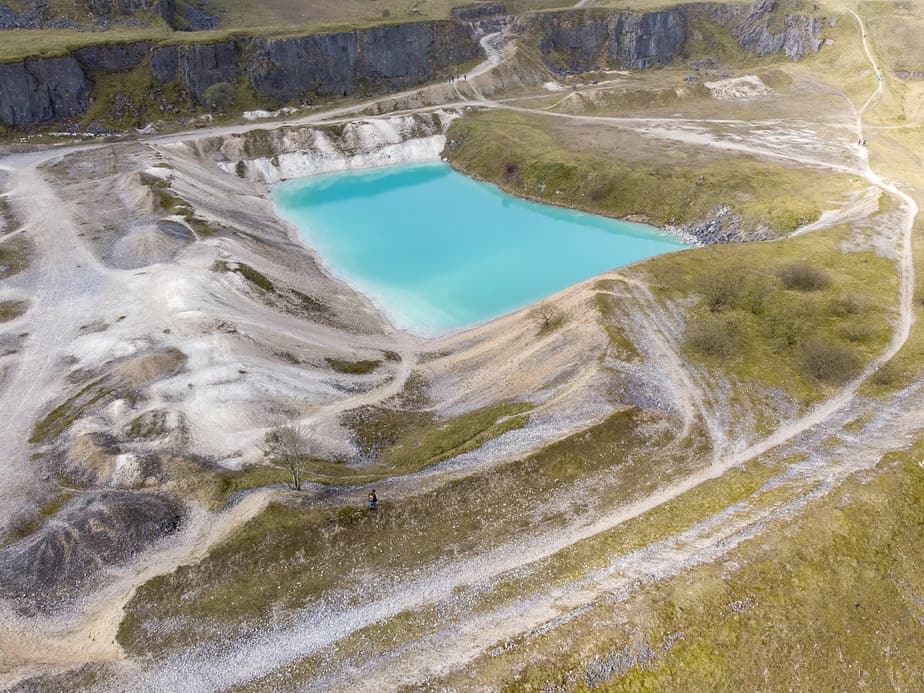 As you travel to Buxton you will see the gorgeously Blue Lagoon. Don’t be fooled by the Caribbean-like shade of the water, as it is a toxic pool of water.

The Blue Lagoon is a quarry and lime waste tip, dangerous for all living creature.

It is located at the Harpur Hill Quarry near the town of Buxton in the Peak District national Park.

As a drastic measure to keep people from the lagoon, when warning signs didn’t stop the tourists, the local government dyed the waters black. It lasted for a while, but the water is once again a stunning shade of blue.

7. The earliest evidence of humans in Britain can be traced at Peak District National Park 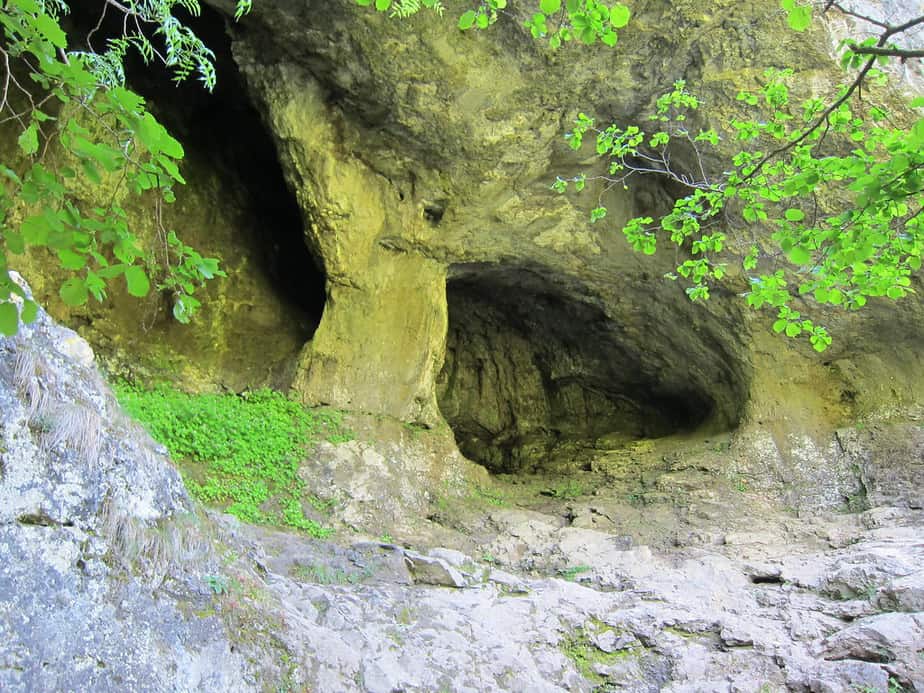 The Peak has been inhabited from the earliest periods of human activity, as is evidenced by occasional finds of Mesolithic flint artefacts and by paleoenvironmental evidence from caves in Dovedale and elsewhere.

There is also evidence of Neolithic activity, including some monumental earthworks or barrows (burial mounds) such as that at Margery Hill.

Evidence of the Bronze Age remains in henges such as Arbor Low near Youlgreave and the Nine Ladies stone circle at Stanton Moor.

8. The park is home to the first long distance footpath 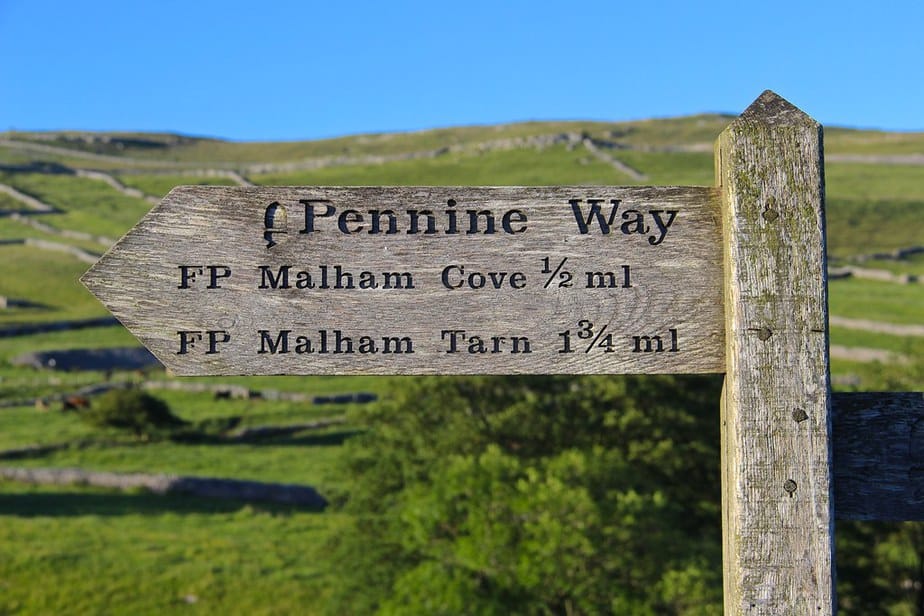 The UK’s first long distance footpath, The Pennine Way, starts in The Peak District, near Edale to the Scottish Borders.

The Pennine Way was the first National Trail in England and is one of the UK’s most famous long-distance walks. Opened on 24th April 1965 the trail stretches for 268 miles (435 km) across England’s wild northern uplands.

Pennine Way is hilly and often remote, making it one of the most challenging National Trail in England.

9. The national parks symbol is a millstone 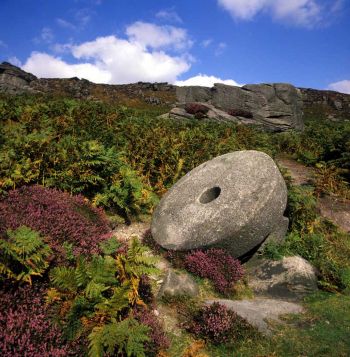 The national park’s symbol is a millstone. Millstones or mill stones are stones used in gristmills, for grinding wheat or other grains.

The millstone has changed over the centuries. A mushroom-shaped conical stone is an earlier shape that appears to be peculiar to the Peak District and may be medieval in origin.

The more familiar wheel-like cylinder shape was produced in the 18th and 19th centuries and these millstones were used to grind grain such as oats, barley and rye.

Several millstones still lie scattered across the national park. At Millstone Edge, near Hathersage, you can see the remains of old millstones abandoned after cheaper imports became available.

10. An inspiration for the arts 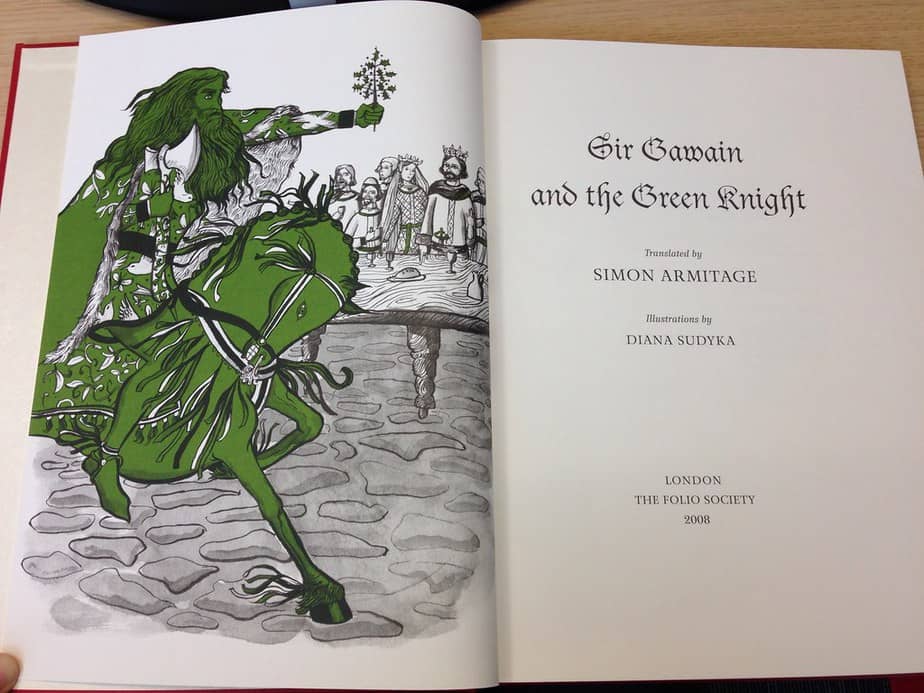 The landscapes of the Peak have inspired writers for centuries. Several locations have been identified by Ralph Elliott and others as locations in the 14th-century poem Sir Gawain and the Green Knight; Lud’s Church is thought to be the Green Chapel.

The Peak District is home to many filming locations including Pride and Prejudice, The Duchess, the BBC’s Jayne Eyre and Harry Potter and the Deathly Hallows.