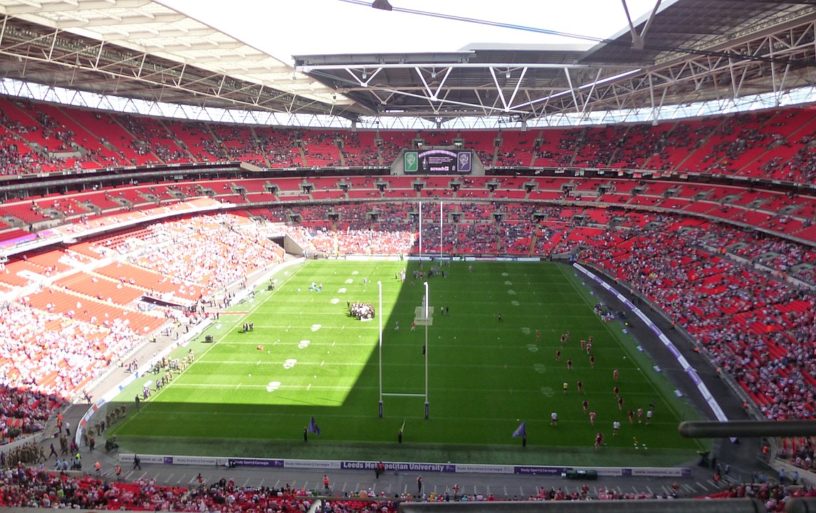 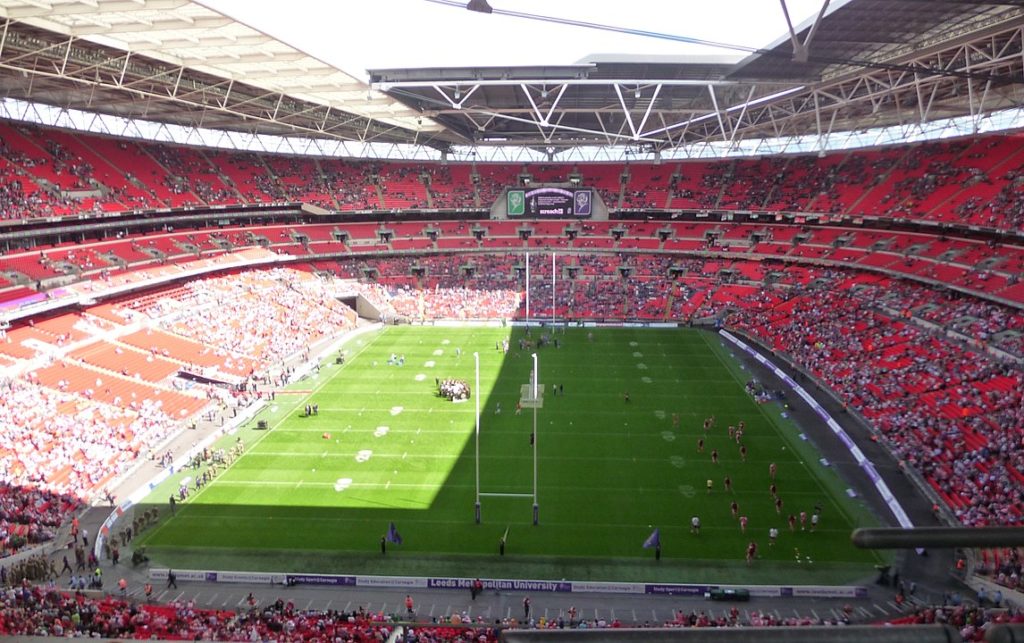 Wembley Stadium is a football stadium in Wembley, a large suburb in England’s largest city, London.  Owned by the body that governs English football, the stadium is the biggest in England and the United Kingdom. It is the second-biggest in Europe after The Camp Nou of Barcelona football club.

Sitting on the site of the original Wembley Stadium which was demolished in 2002-2003, it is one of the most expensive stadia ever built. The estimated total cost of this new Wembley Stadium was £789 million in 2007, which is over £1.5 billion today.

The stadium hosts major football matches including home matches of the England national football team and the FA Cup Final. No athletics events (track and field) have taken place at the stadium since its construction.

Here are 10 facts about this massive stadium.

1. Wembley Stadium is the Home of Football

The Football Association (FA) is the ‘father of football’ because it is the governing body of English football.

The Association owns the Wembley Stadium which hosts its headquarters. FA has set up a subsidiary company called the Wembley National Stadium Limited (WNSL)that manages the stadium.

This stadium is considered the Home of English Football and its main user is the English National Football Team.

2. The Size of the Stadium 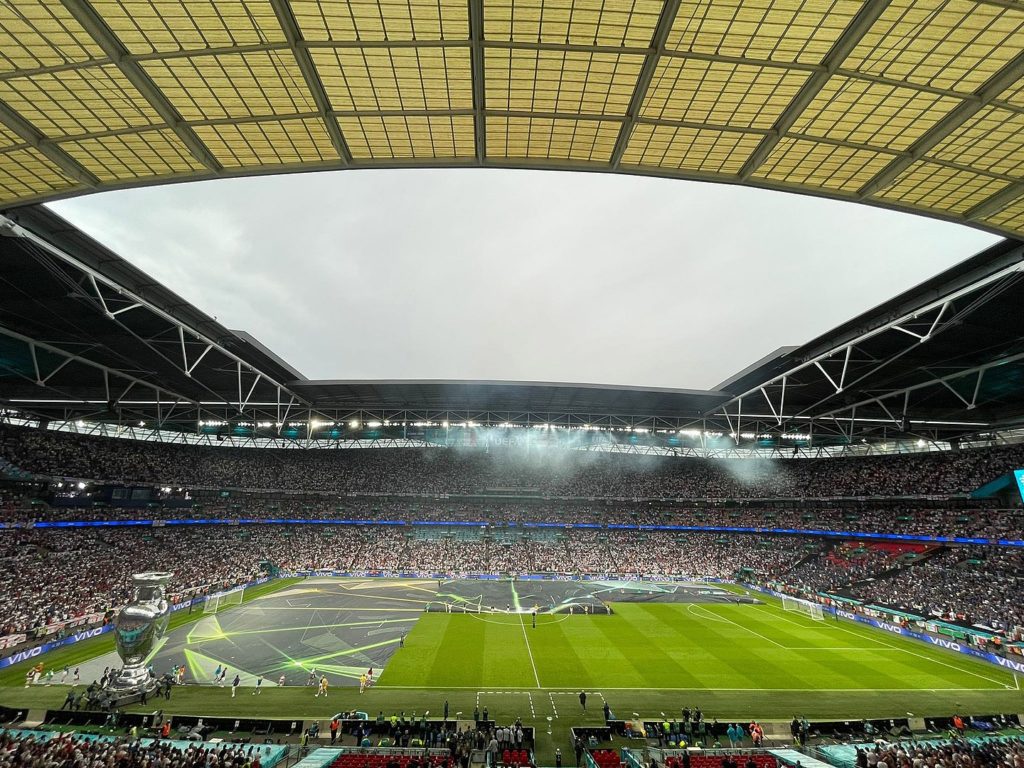 Wembley Stadium before the before the kick-off of the UEFA Euro 2020 final (11 July 2021). Photo By Quirinale – Wikimedia Commons

The stadium is a bowl design with a capacity of 90,000 spectator seats protected from weather elements by a sliding roof that does not completely enclose it. The circumference of the stadium is approximately 1 kilometer (0.62 miles).

The stadium is supported by a foundation that consists of 4,000 separate pillars, the deepest going 35 meters (115 feet) into the ground.

This stadium holds the world record for the most toilets in one venue with a total of 2,618.

With 90,000 people at full capacity, each toilet should serve at most 35 people which is a reasonable ratio.

The total length of the escalators in that stadium is 400 meters and 166 executive suites. 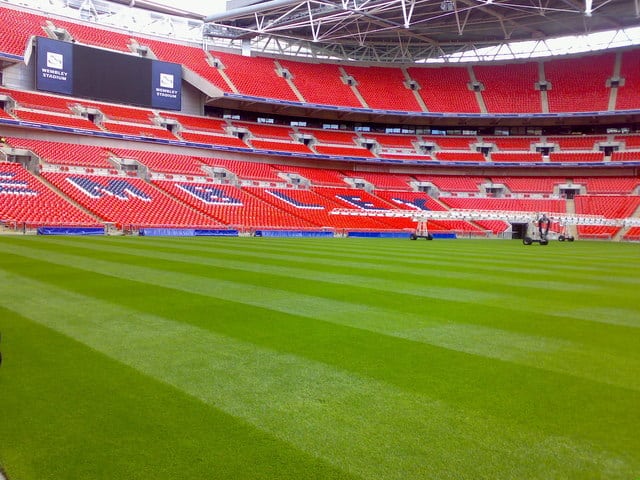 The grass at Wembley Stadium. By Stacey Harris – Wikimedia Commons

The grass on the pitch of the Wembley Stadium is 97% organic and 3% artificial which makes it a hybrid grass pitch. It uses this synthetic grass to ensure the playing surface is as perfect as possible.

For grass to grow and be healthy, it needs water, carbon dioxide, oxygen, nutrients, and light. The movable roof installed at the stadium was designed to maximize the amount of direct sunlight reaching the pitch to ensure optimum grass-growing conditions.

The grass is cut three times to perfect neatness to prepare for a match. For music concerts, special covers come out to protect the pitch from the thousands of people standing, jumping, skipping, and dancing on it.

5. The Pitch is Not Perfect

The pitch size is 115 yards (105 meters) long by 75 yards (69 meters) wide. This is a good size for a category four (the highest category) stadium as per the Union of European Football Associations (UEFA) standards.

There has always been some controversy surrounding the pitch at Wembley. Following criticism of the pitch by some coaches who described it as not good enough for important games, FA admitted in April 2009 that standard improvements were needed.

Since then, the pitch had been re-laid more than 10 times without a positive result. There seems to be no hope of recreating the perfect pitch that the old stadium was famous for. 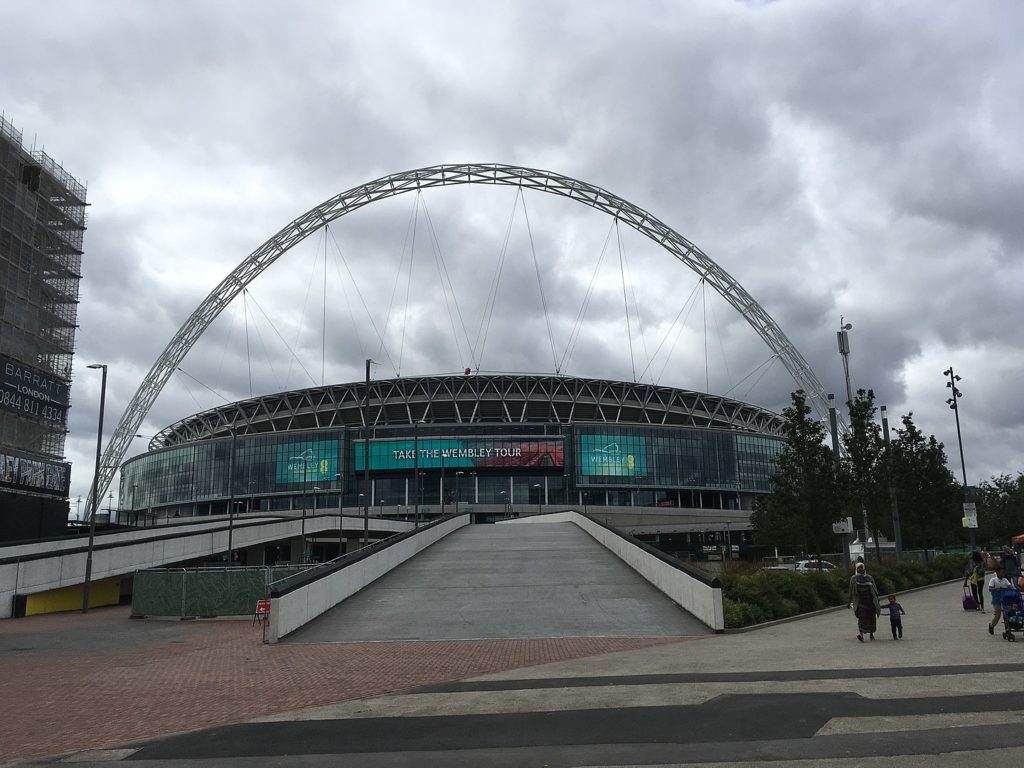 Often seen even from the air when flying, the huge 134 meters tall Wembley Arch is a landmark for the City of London.

The circular section lattice arch supports 100% of the roof on the north side and 60% of the retractable roof on the south side holding more than 75% of the weight of the whole roof.

The stadium is often used for concerts by famous artists from all around the world.

Artists like Madonna, Eminem, Taylor Swift, Beyoncé, Adele, Elton John, the Spice Girls, and many more have all performed at Wembley.

Adele’s concert in June 2017 had 98,000 people. That was the highest attendance ever in the stadium. 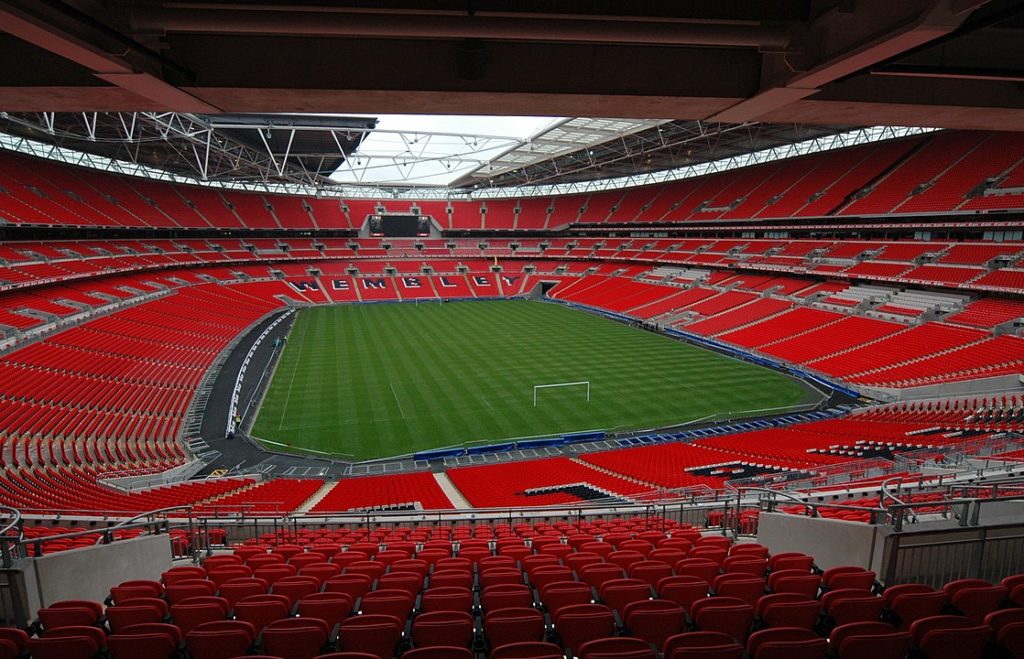 Apart from football matches and concerts, the stadium is also used for other sporting activities like rugby and American Football.

Wembley also played host to Race of Champions. Drivers from Formula One, World Rally Championship, and NASCAR competed around the purpose-built circuit in identical cars.

Boxing is another sport that is often hosted at Wembley Stadium. A good example is the heavy-weight championship fight between Anthony Joshua and Wladimir Klitschko that was held in April 2017.

During this game, approximately 90,000 boxing fans saw Joshua beat Klitschko after a Technical Knockout, an absolute record of attendance for a boxing match.

The partially-retractable roof sits 52 meters above the playground. The roof on the east, south, and west can be moved forward and backward to add or reduce the shade. This allows more sunlight onto the playing surface to help preserve and maintain the condition of the pitch.

Even though the roof does not completely close, it does cover every seat in the stadium protecting the spectators from the elements. This fact makes Wembley the largest fully covered stadium in the world. 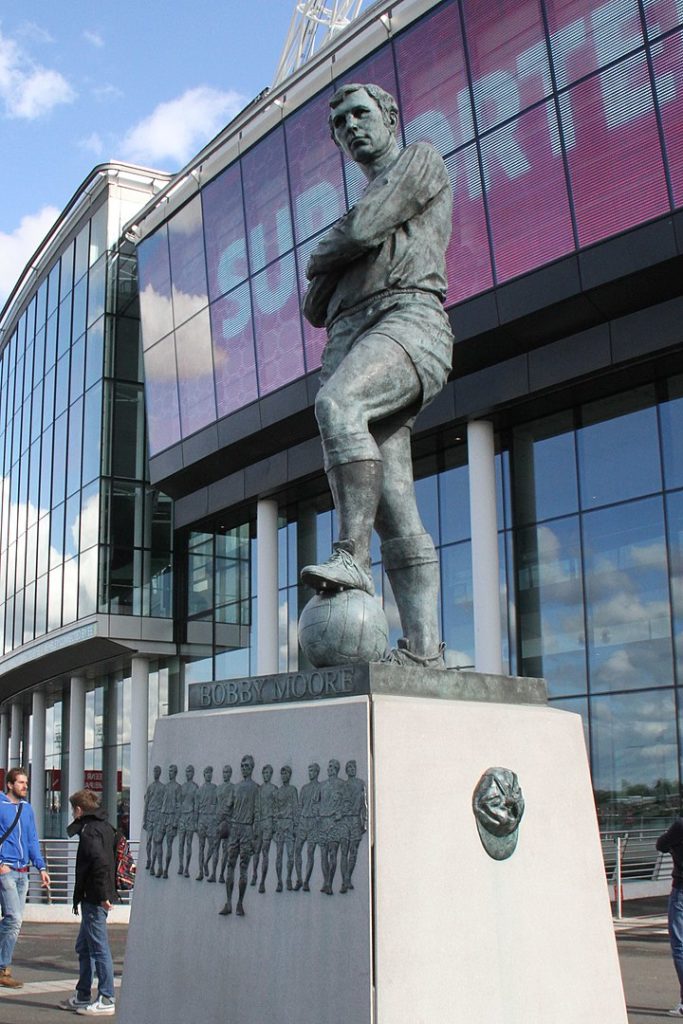 A twice-life-size bronze statue of Bobby Moore that stands at 20 feet welcomes visitors to the stadium. Bobby was the legendary captain of the English National Football Team in 1966 when the team won the FIFA World Cup 1966.

Standing outside the entrance and looking over spectators as they walk down Wembley Way into the stadium, the statue was unveiled as the “finishing touch” on 11th May 2007 a week before the official opening of the New Wembley Stadium.

Unveiled fourteen years after Moore’s death from cancer at the age of 51 years, the statue was revealed by Sir Bobby Charlton who was a member of the England team that won the World Cup.