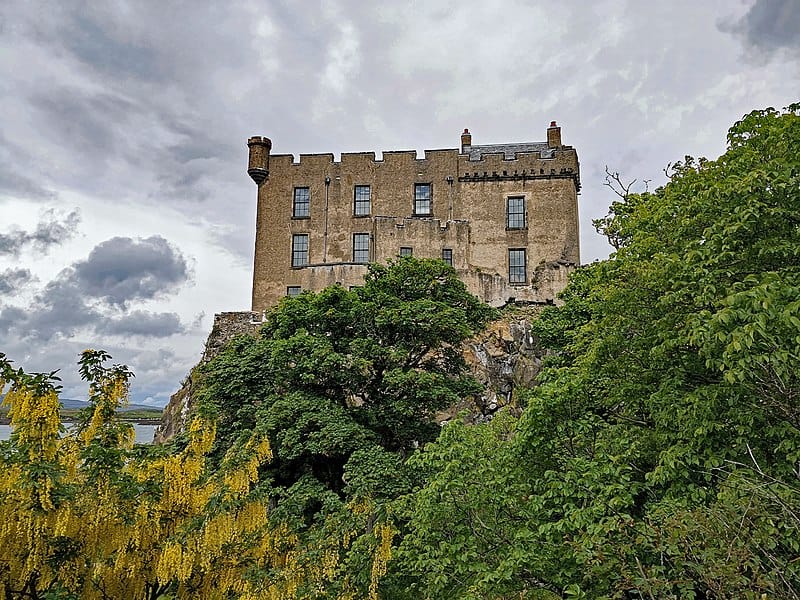 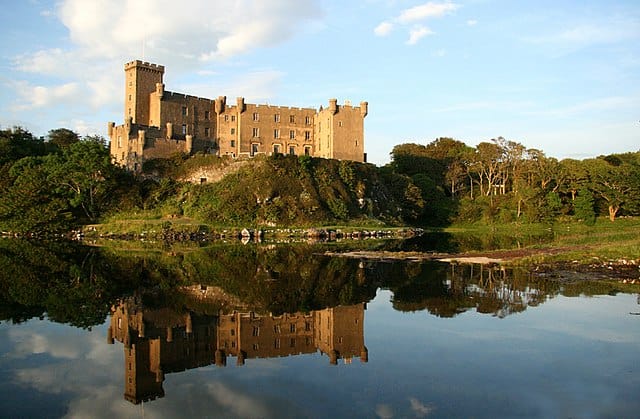 Dunvegan Castle is one of the greatest Hebridean castles and the only Highland fortress to have been continuously occupied by the same family for 800 years.

Architecturally it is a building of high importance, containing the work of at least ten building periods ranging from the 1200s to the 1850s. Dunvegan Castle today has a unified design with Victorian dummy pepper-pots and defensive battlements running the whole length of the roofline. This romantic restoration was carried out by the 25th Chief between 1840 and 1850 to the plans of Robert Brown of Edinburgh at a total cost of £8,000. Underneath this outer skin, however, there remains a series of five separate buildings each with its unique character and story to tell.

The tone is set by the imposing land bridge leading to the colonnaded portico entrance built by John Norman (24th Chief) in 1814. From its impressive entrance hall to its ornately decorated State Rooms, the castle is a unique mix of building styles that reflect the requirements of the clan Chiefs who built them over the centuries.

If you want to discover the authentic spirit of the Isles, you will find it at Dunvegan where the castle and its wonderful collection represent the very essence of all that Gaeldom represents in the Highlands and Islands.

Dunvegan Castle is the ancestral seat of the Clan MacLeod of MacLeod. It commands a dramatic position on the northwest coast of the Isle of Skye, on the edge of a sea loch, and is the oldest continuously occupied castle in Scotland. The current occupant, Clan Chief Hugh Magnus MacLeod of MacLeod, is the 30th person to hold the hereditary title, the castle, and 42,000 acres of Skye. If you are planning a trip to the Hebrides and the Isle of Skye, Dunvegan is a must-visit. Here’s what you need to know before you go.

1. MacLeods is one of the most important Highland clans

The MacLeods, one of the most important Highland clans, have roots reaching back into Norse and Viking history. They are descended from Leod, the youngest son of the frightfully named Olaf the Black, the last Norse King of Man and the Isles, who died in 1265.

If all of this sounds similar to the film”Highlander,” that’s no accident. Many of the flashback sequences in that cult history/sci-fi film about the immortal Connor MacLeod were filmed at Dunvegan.

The castle and estate were also the backdrops for “47 Ronin” with Keanu Reeves and “Macbeth” with Michael Fassbender.

2. The history of Dunvegan Castle rolls back to the year 1200 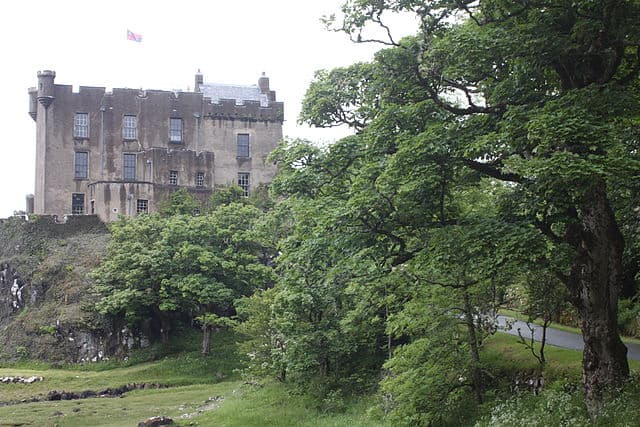 View of the castle from the path to the jetty. Photo by Nessy – Wikimedia Commons

The castle was likely started in about the year 1200 before the Hebrides were part of Scotland. The word “Dun” is a Norse word for a stronghold or fort. In about 1300 it was enclosed in a curtain wall that rises straight up from a massive rocky outcrop beside Dunvegan Loch.

At least 10 different architectural styles are represented in the house. It grew as a collection of several different buildings and styles that were added according to the needs of the clan across the centuries.

3. Currently, there are five separate buildings enclosed in a Victorian shell that gives the castle a unified appearance 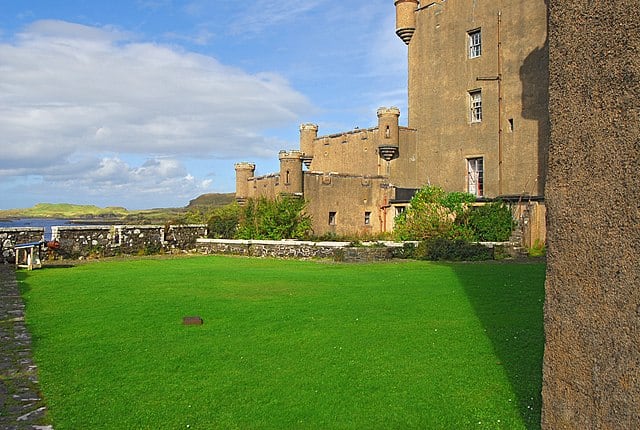 Today, there are five separate buildings enclosed in a Victorian shell that gives the castle a unified appearance. Several of the towers often called “pepper pots” were added during the Victorian period and are purely decorative.

4. Visitors find plenty of things to do at Dunvegan Castle both indoors and out

While visiting the Dunvegan castle, one can tour the Castle. Dunvegan, as you see it today, was romantically restored between 1840 and 1850 by the 27th MacLeod of MacLeod (a traditional name for the clan chief).

As you tour the castle, you will see the five different buildings within it, each expressing a different period of history. Guided tours leave from the entrance hall throughout the day.

They are timed to prevent the castle from becoming overcrowded, so don’t be surprised if you’re asked to wait before beginning your tour. You can also guide yourself, using the Dunvegan Castle guidebook. It points out the historic paintings and clan legends.

5. One can look for the Castle treasures while visiting the Dunvegan Castle 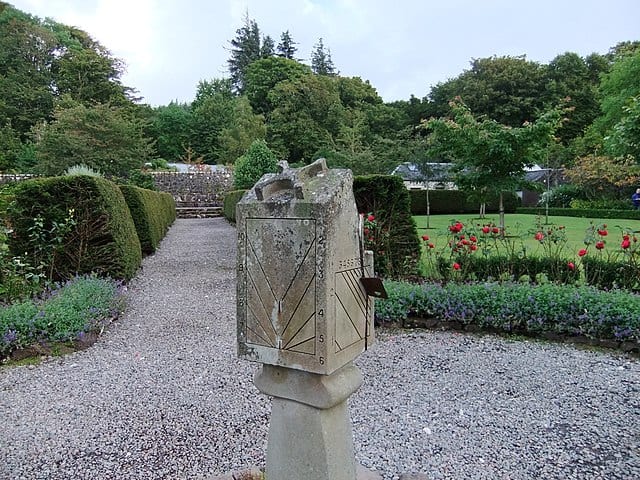 There are two that are intimately connected with the history and the legends of the MacLeods of MacLeod. The Fairy  Flag is a very ancient (and crumbling) silk banner that was probably made in Syria and brought back from the Crusades.

Or it may have been a battle banner of the Norse King Harald Hardrada (killed in 1066). On the other hand, the MacLeods like to tell you that the fairies gave it to an ancestor. Another famous treasure is Ruairidh Mor’s drinking horn.

That’s Scot’s Gaelic Rory, by the way. According to family tradition, every new clan chief must drain the horn of wine in one gulp as a test of manhood. Originally, the horn contained two imperial pints (1.2 U.S, quarts). Somehow, mysteriously, the horn has been filled in quite a bit over the years, making the feat a bit less fearsome.

6. Visit the Gardens at Dunvegan Castle will excite you 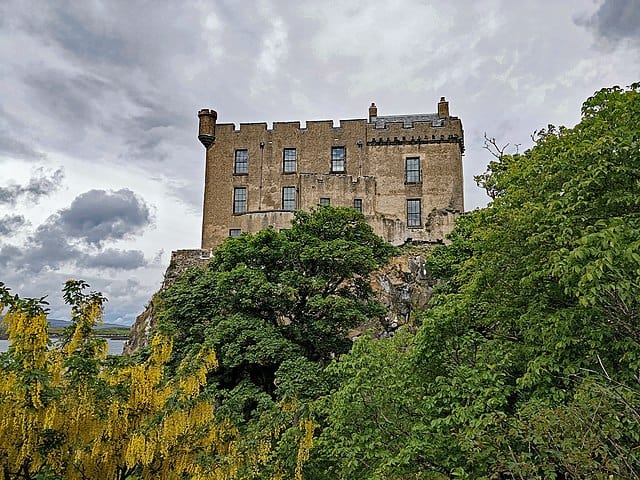 The castle is surrounded by 5 acres of gardens. They were planted in 1978 along the lines of earlier gardens created in the 18th century.

The gardens, which include a rose garden, water garden, and walled garden are triumphs of gardening skill over climate and are well worth a visit.

7. Getting up close to Dunvegan’s Seals will be a memorable thing to do while at the Dunvegan Castle 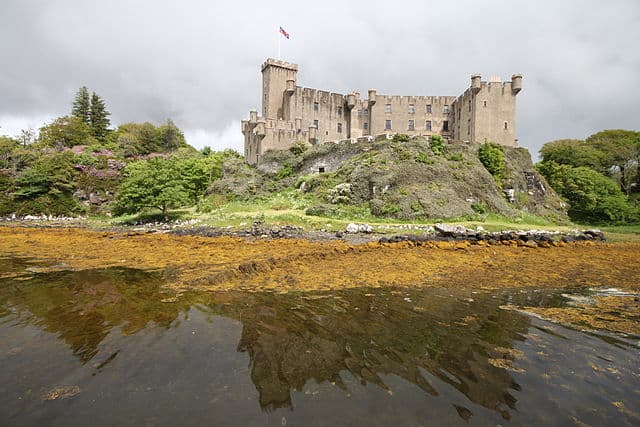 From April through September, you can take a 25 – minute trip in a traditional clinker-built boat to visit the estate’s seal colony. You might also spot nesting herons and sea eagles too.

Two-hour fishing trips and loch cruises for up to four people are also available, weather and sea conditions permitting.

8. Dunvegan castle is about a mile from Dunvegan village 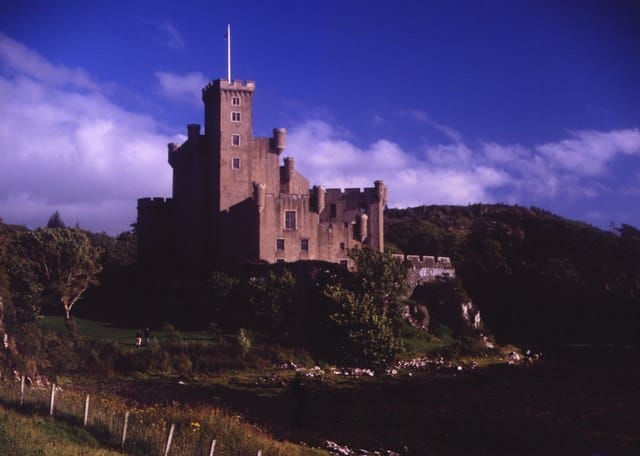 Dunvegan Castle is located 1 mile (1.6 km) to the north of Dunvegan on the Isle of Skye, off the west coast of Scotland. It is the seat of the MacLeod of MacLeod, chief of the Clan MacLeod. Probably a fortified site from the earliest times, the castle was first built in the 13th century and developed piecemeal over the centuries. In the 19th century, the whole was remodeled in a mock-medieval style. The castle is built on an elevated rock overlooking an inlet on the eastern shore of Loch Dunvegan, a sea loch. Photo by Jack Joseph Anderson – Wikimedia Commons

The castle is about a mile from Dunvegan village on the Northwest Coast of the Isle of Skye. If you are driving, program your satellite navigation to the Kyle of Lochalsh.

From there, cross the Skye Bridge to the island. It’s a 45-minute drive to Dunvegan. The scenery along the way is spectacular but some of the roads are pretty hair-raising.

9. You could also take a coach tour while visiting the castle 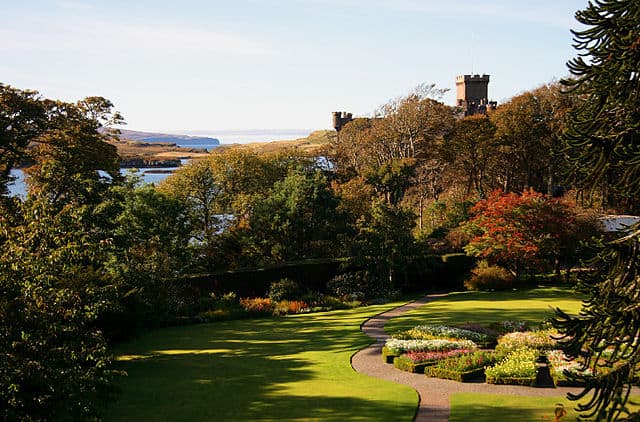 10. The Dunvegan castle essentials are key to taking notes off 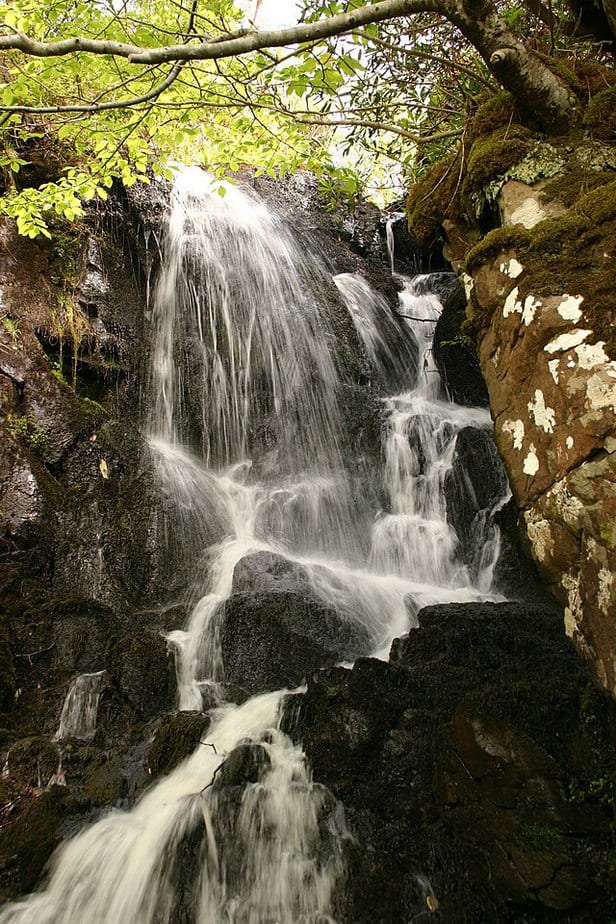 The opening hours of the Dunvegan castle are from 10 a.m. to 5:30 p.m. The facilities within the castle include three shops with Scottish gifts, souvenirs, and the MacLeod brand, single malt whisky, special children’s castle, garden tours, and baby changing facilities.

The price to pay to access the castle as of 2019 was 14 pounds for adults. Tickets for children, students, senior citizens, and families are also readily available.

If interested in taking seal trips, fishing trips, and loch cruises the costs are extra, meaning you have to be ready to top up your entry charge.