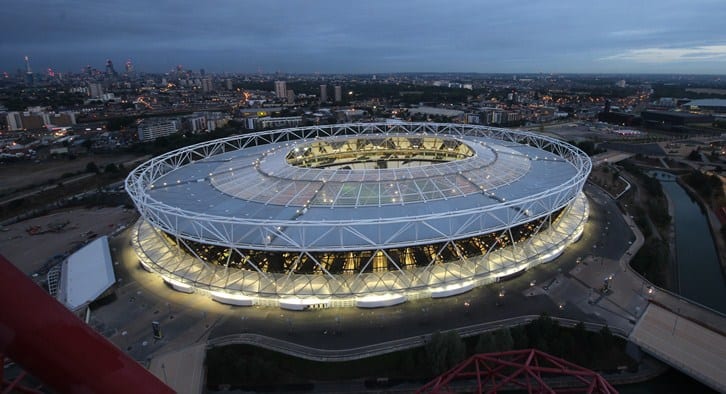 It was constructed specifically for the 2012 Summer Olympics and 2012 Summer Paralympics, serving as the track-and-field venue and as the site of their opening and closing ceremonies.

Originally, the Stadium was priced up at £280m in the London 2012 bid book, but the total cost of constructing the stadium was £486 million.

Following the Games, the stadium was renovated for multipurpose use, and it now serves primarily as the home of Premier League club West Ham United.

Below are the top 10 interesting facts about London 2012 – Olympic Stadium;

1. Its first official even was not an Olympics even 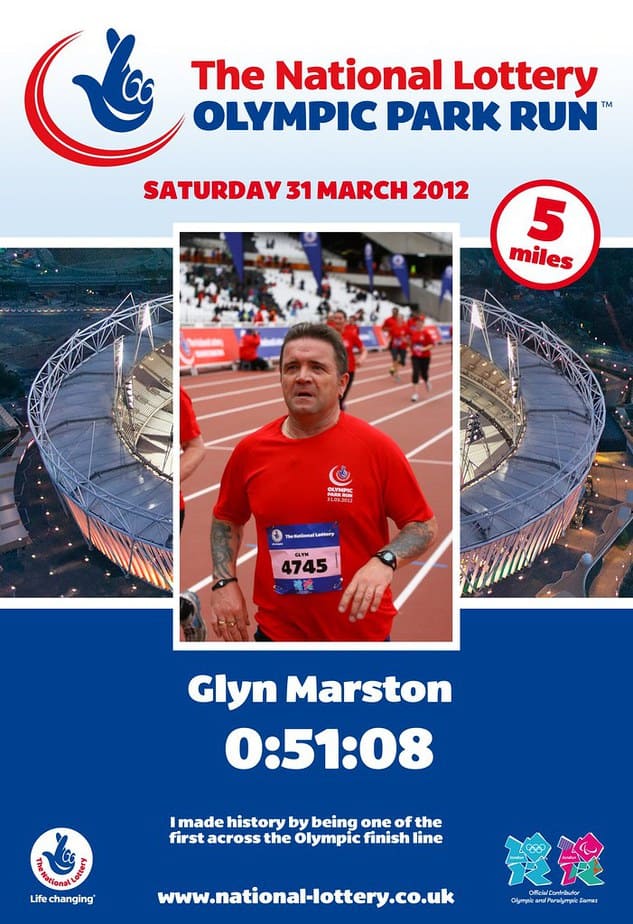 The stadium was primarily constructed for the 2012 Summer Olympics and 2012 Summer Paralympics, however the stadium held its first public event in March 2012, serving as the finish line for a celebrity run organised by the National Lottery.

Princess Beatrice officially started the event at 14:00 BST that had five thousand runners picked randomly from almost 43,000 entrants from around the UK. This people became the first public crowd allowed in to the venue.

The runners set off in waves from a point near the spiraling red Orbit Tower, and passed the Athletes’ Village, Velodrome, Basketball Arena and other venues before finishing in the Olympic Stadium. Finishers were spurred on in the final 300 m by the sound of the theme from the classic athletics film, Chariots of Fire. 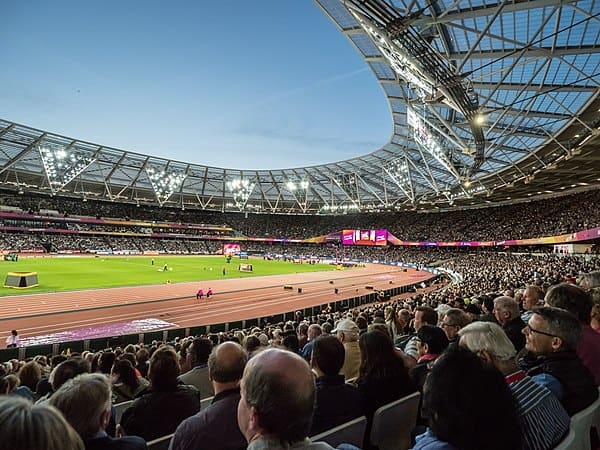 The Olympic stadium hosted the 2017 IAAF World Championships. The event hosted the athletics events and the opening and closing ceremonies of the 2012 Summer Olympics, and has a capacity of 60,000.

Six days before the events were due to begin, it was reported that more than 660,000 tickets had been sold, which was a record for the World Championships, surpassing the previous record of 417,156 tickets sold for Berlin 2009.

It was the first to be held after being renamed from IPC Athletics World Championship, and featured 213 medal events.

This was the first time that both events were held in the same location in the same year. An impressive fit to conquer.

3. Not a Royal Park of London 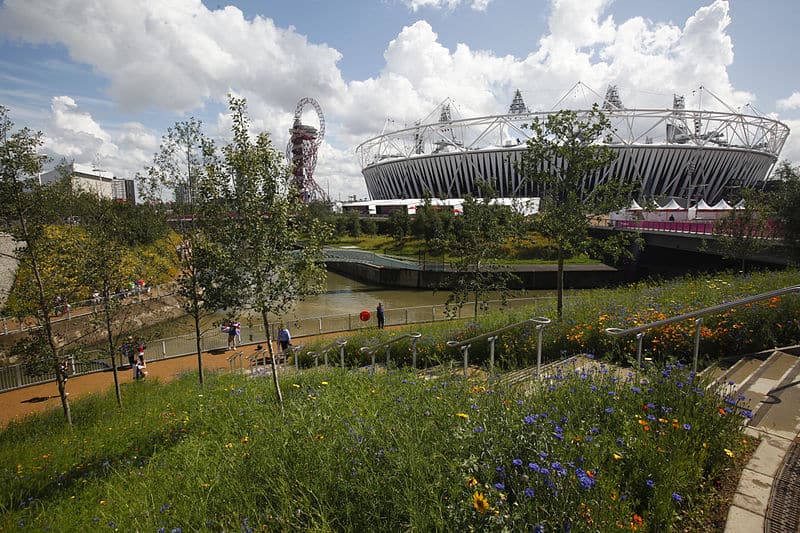 The Olympic Stadium is located at Olympic Park, which is also known as the Queen Elizabeth Olympic Park, although it’s not an official Royal Park of London.

The Royal Parks of London are lands that were originally used for the recreation, mostly hunting, of the royal family. They are part of the hereditary possessions of The Crown, now managed by The Royal Parks Limited, a charity which manages eight royal parks and certain other areas of parkland in London.

4. The soil on the Olympic was cleaned 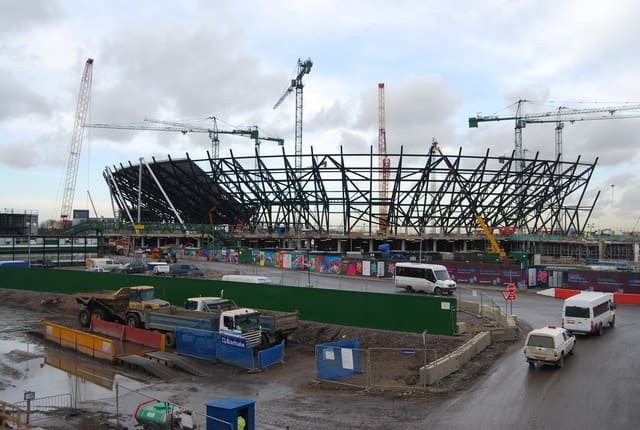 Dominated for more than 100 years by light industry, the 2.5 km2 site was contaminated and its waterways choked. To save money, 95% of the vital soil on the Olympic site was actually cleaned.

The project involved the excavation of 2.3 million m³ of soil, 800,000 m³ of which were washed in five soil cleaning machines. But other treatments such as bioremediation (in which oxygen is used to accelerate the breakdown of waste by bugs) and stabilisation technologies were also explored.

Five ‘soil washing machines’ were installed on the site. The machines work by having the contaminants stick to fine particles inside the machine which in turn form into cakes of waste, these cakes can then be transported to landfill sites.

5. It is not the first Olympic stadium to be built in London 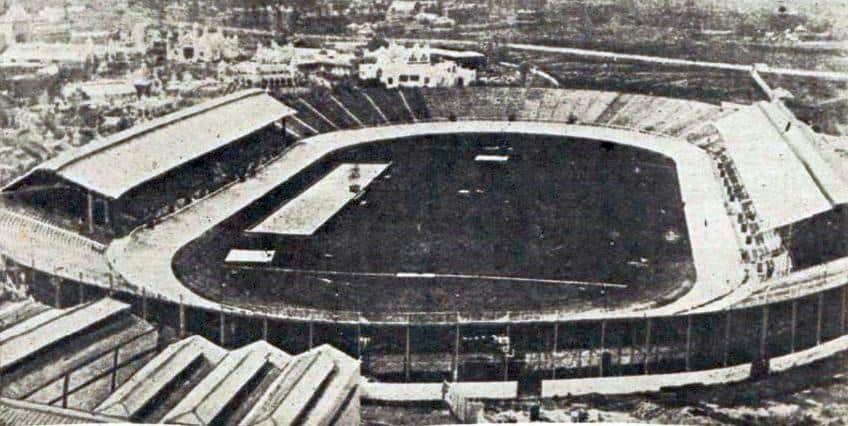 The White City Stadium, located in White City, London, was constructed for the 1908 Summer Olympics. This was after the games changed locations from Rome to London after the eruption of the volcano Vesuvius in 1906.

It hosted the finish of the first modern marathon and other sports like swimming, speedway, boxing, show jumping, athletics, stock car racing, concerts and a match at the 1966 World Cup.

The stadium was completed in 10 months and costed about £60,000. However, the White City Stadium was demolished in 1985 and the site is now occupied by White City Place.

6. Keep an eye for otters 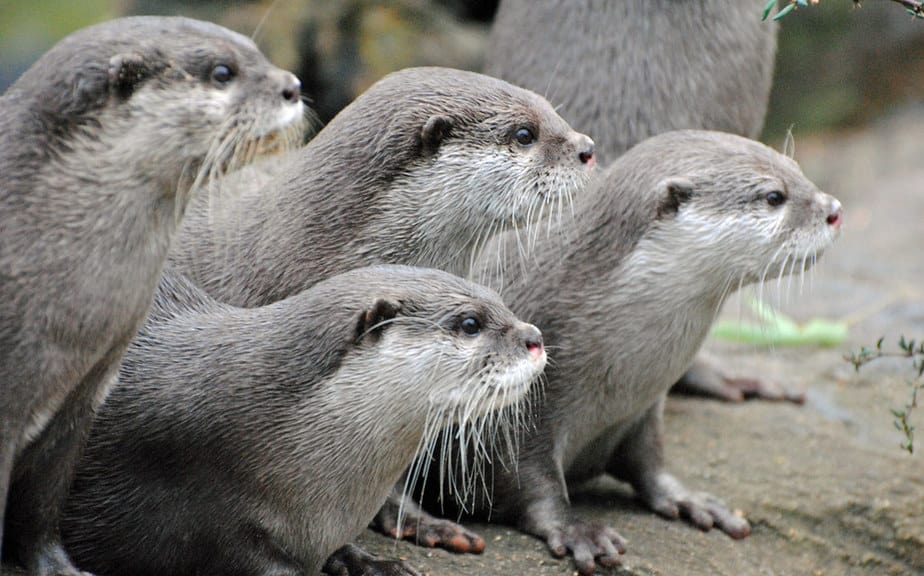 The animals, which are related to stoats, weasels and badgers and were romanticised in books like Ring of Bright Water and Tarka the Otter, are making a comeback in the area after being driven away by pollutants.

The River Lea runs right through the site, winding its way around the Olympic stadium. To increase the species recovery, specially created otter homes have been installed along the river. Now there are thought to be no more than 13 otters in the South-east.

7. The stadium gave new life to an abandoned area 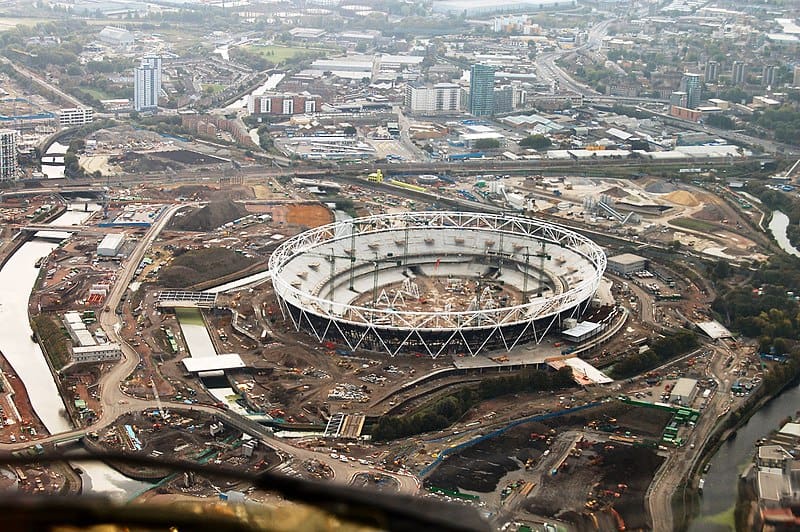 The London Olympic Park is located on former industrial land at the southern end of the Olympic Park between rivers and tributaries including the Old River Lea and parts of the Bow Back rivers and St Thomas Creek.

This area was originally an old, polluted and disused area of east London that hard contaminated soil. Today there are more than 3,000 mature trees and thousands of flowers specially selected to represent every continent. 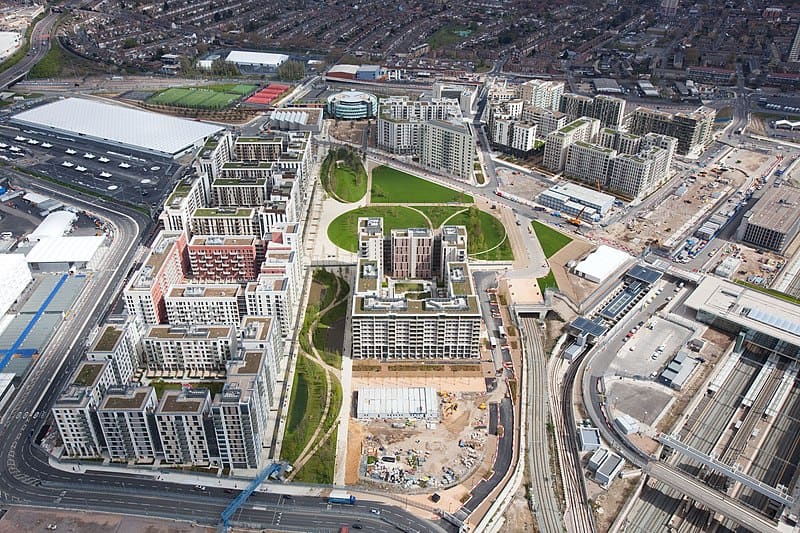 The Olympic Village is a relatively new mixed-use district with around 3000 flats, half of them of affordable and social housing, while three universities and other cultural institutions have plans to open new branches in Stratford.

With new life breathing into the area, many other commercial and offices spaces came up, resulting in the creation of more jobs within the area.

9. Olympic Stadium was nominated for its architectural design 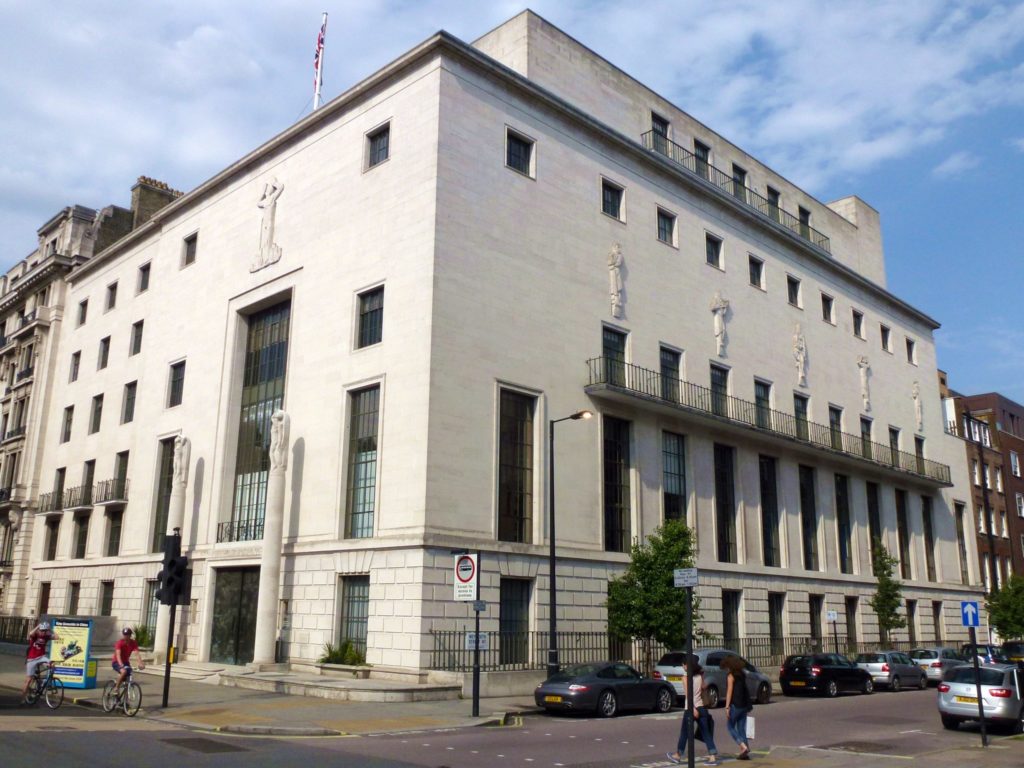 Despite the criticism, the Olympic Stadium was nominated for the 2012 Stirling Prize in architecture, losing out to the Sainsbury Laboratory at the University of Cambridge.

The Royal Institute of British Architects Stirling Prize is a British prize for excellence in architecture. It is presented to “the architects of the building that has made the greatest contribution to the evolution of architecture in the past year.” The architects must be RIBA members.

10. The government meant to have an athletics-only stadium 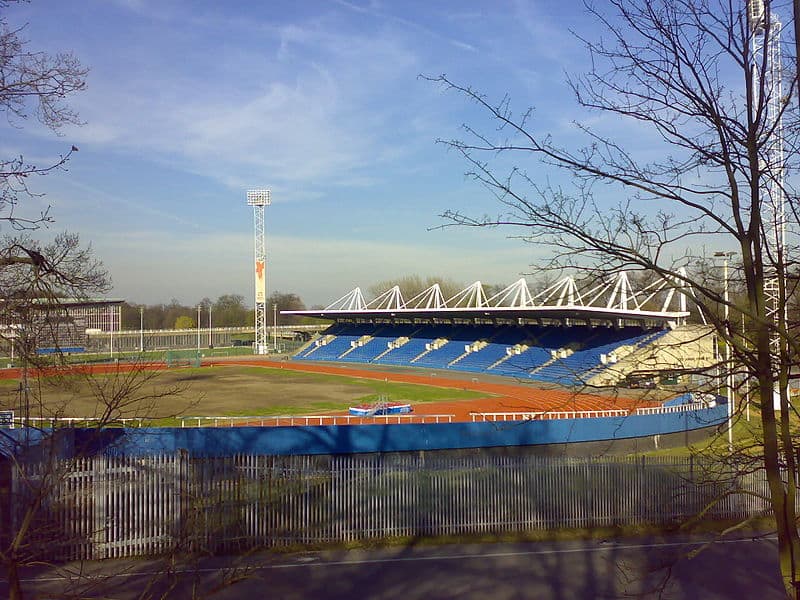 Today we know the Olympic Stadium as a multipurpose outdoor stadium, however the British government preferred to produce a brief for an athletics-only stadium.

The original aim was to largely disassemble it after the games, reducing the 85,000 seats to a capacity of 25,000, with the lower tier remaining in place as a permanent athletics facility. However, later on, the government changed the initial plan for a multi-sport stadium.

Olympic Stadium was meant to replace the Crystal Palace National Sports Centre, which was destroyed by fire in 1936.