Top 10 Facts About the Royal Opera House in London 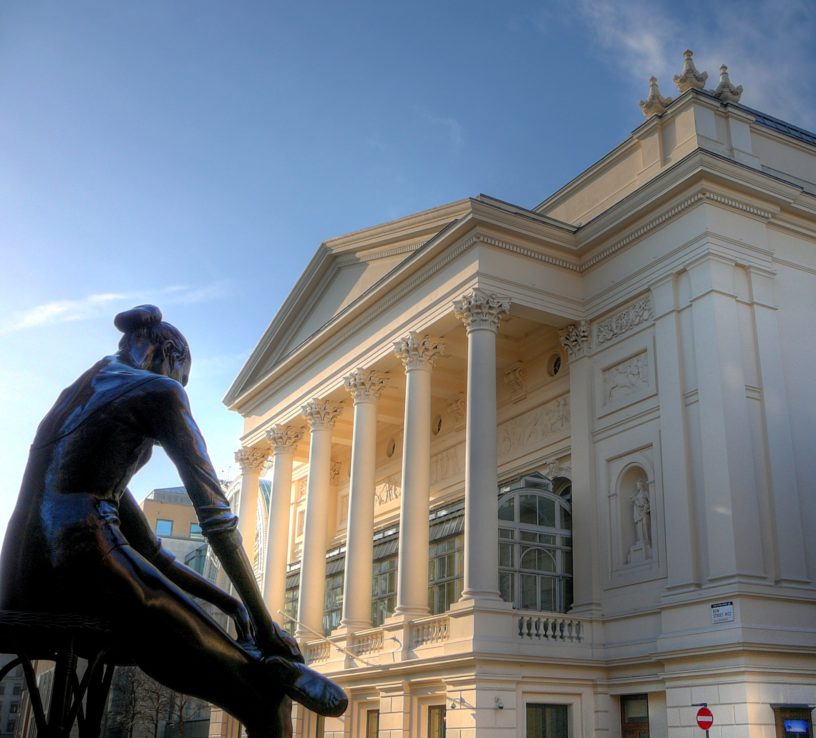 Top 10 facts about the Royal Opera House in London

The Royal Opera House in London is one of the most iconic buildings in the entire city. The exterior of the building alone is enough reason to make this one of your stops on your tour of the city during your next visit to the capital. Not to mention, the inside is one of the most beautiful and intricately decorated interiors that you will ever see. Often called simply “Covent Garden” by local Londoners, the Royal Opera House is the home of the Royal Opera and the Royal Ballet – two prestigious organizations that take part within the city.

The Royal Opera is one of the main British opera companies located in London after having been founded back in the mid-20th century. The Royal Ballet is an internally-renowned ballet company that is one of the biggest ballet companies in the entire United Kingdom. Since The Royal Opera House is one of the most prestigious buildings in the United Kingdom, it is no wonder that this building brings massive crowds to gaze at the outside, take tours of the inside, or buy tickets to the Ballet or the Theatre.

But what are some of the lesser-known facts about the Royal Opera House that you may not have heard in your tour of the grounds? By finding out some insider scoop and learning about this historical building, you can feel like a real local the next time you head to the English capital.

10 facts about the Royal Opera House in London

It was first proposed back in the mid-17th century 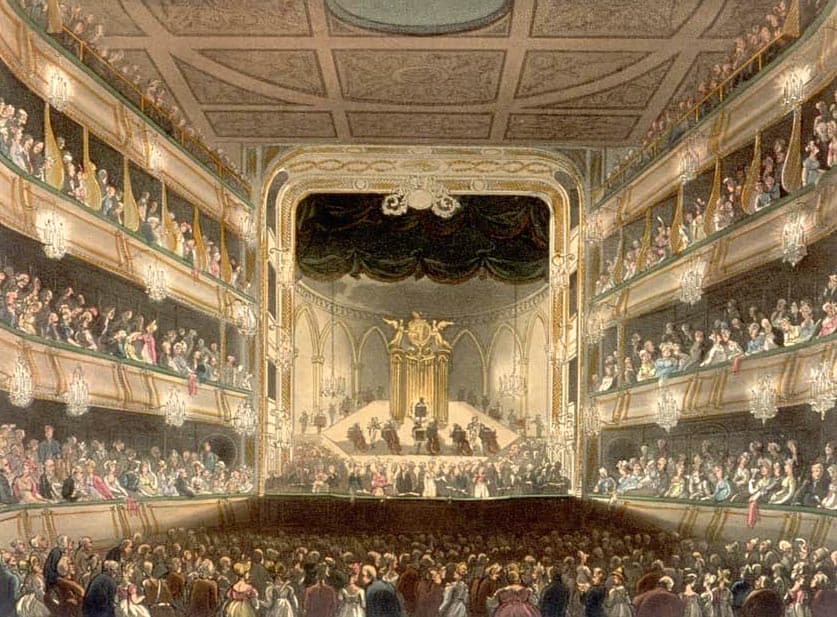 The theatre dates back to 1662, when the foundation of the Theatre Royal was proposed by Sir William Davenant, a poet, and playwright who was a prominent Renaissance figure in the United Kingdom. During this time, there were letters sent between various theatre companies in the nation to determine where their new company should be held – and the consensus was Covent Garden. 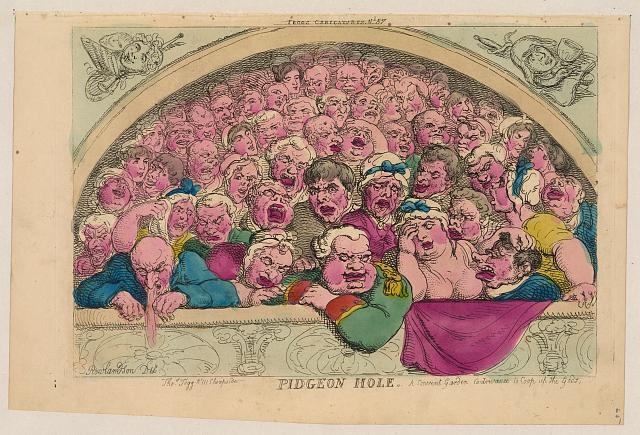 The theatre was first built in 1728, after a member of the Duke’s Company gained enough capital and financial help to begin building the Theatre Royal. The designer of this first building was Edwards Shepherd, a London architect, and developer who was known for his numerous architectural endeavors during the Georgian period in UK history. The theatre finally opened its doors a few years later in 1732, when The Way of the Word took place on the main stage.

A second theatre was built 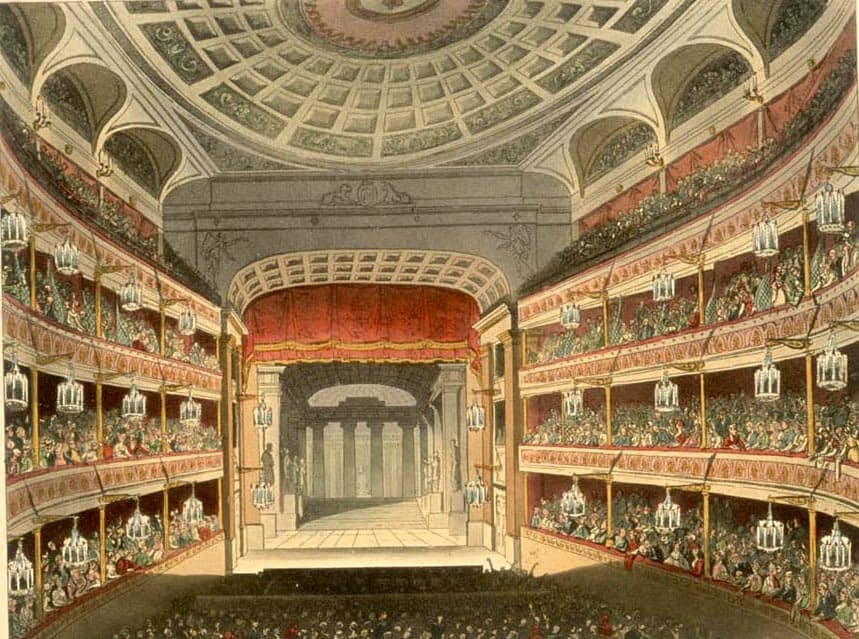 In the very early 19th-century, a second theatre was built. This theater was designed by Robert Smirke, an English architect that used various architectural styles in his building creations, focusing on the Greek Revival style. The theatre finally opened in September of 1809 with a performance of Macbeth.

The Royal Theatre was a Dance Hall During World War II!

During the Second World War, the Royal Opera House was actually used as a dance hall! During WWII, the theater was not doing any plays or performances – but the grand building was still in use for casual dances, ballet companies, and opera practices.

Reconstruction continued to happen after the late 20th-century 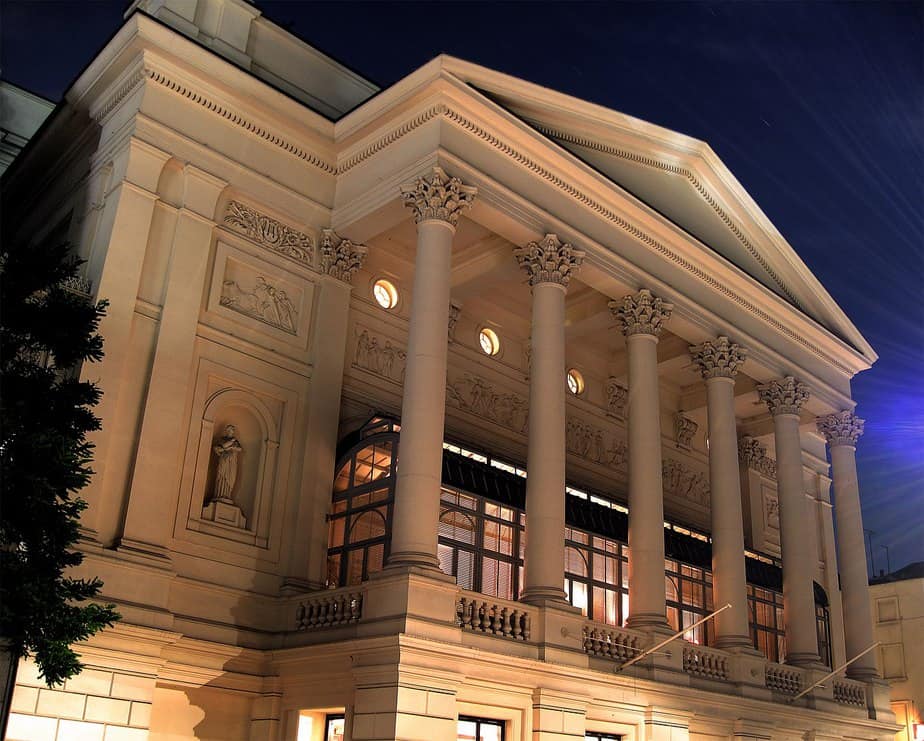 The Royal Opera House after reconstruction – By By Peter Suranyi – Own work, CC BY-SA 3.0, https://commons.wikimedia.org/w/index.php?curid=7509247

Reconstructions started happening on the Royal Opera House after the 1960s and continued well into the next decades. Mainly, there were improvements to other amphitheaters in the 1960s that required the need for further renovations in the following decades. The developers realized there had to be structural changes to enhance the integrity of the building, bringing on further changes in the early 1980s.

During this decade, a major renovation took place, including fixing the ballet studios, offices, dressing rooms, and adding an extension on the back of the building. During the 1990s, the Royal Opera House also secured additional funding to modernize and fix the entire building, helping with adding adjacent buildings for extra storage and practice space and increasing the size of the auditorium.

Is the Royal Opera House in Borough Market? 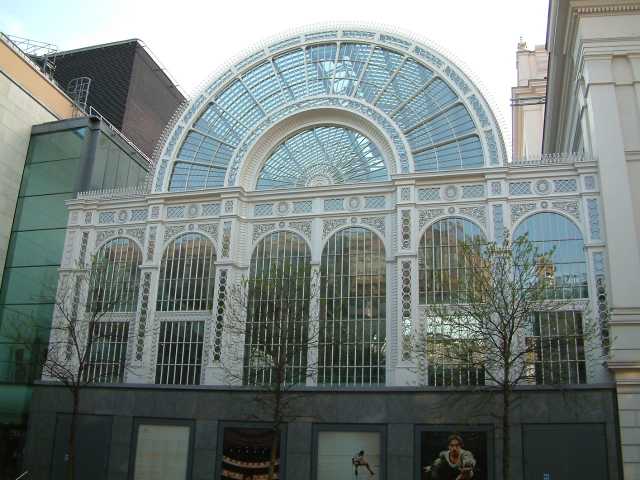 No, not quite – but it might look like it! The next time that you are wandering around Borough Market shopping for unique items, vintage clothes, ethnic food, or a coffee before work, look at the grand facade in Floral Hall – this used to be the old E.M. Barry Opera House!

It had the first ballet d’action 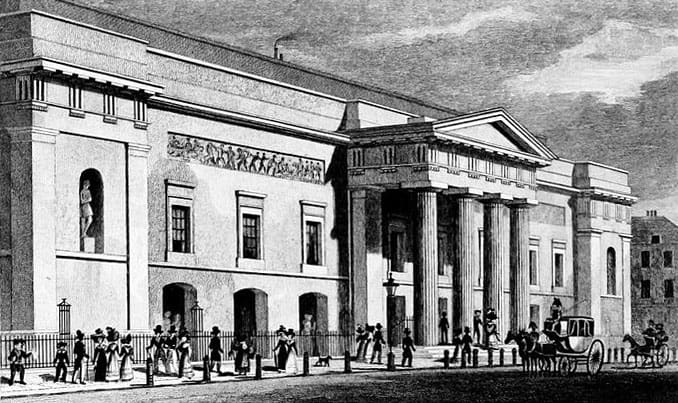 The theatre in the 1820s – By By en:Thomas H. Shepherd (1792–1864), engraved by John Rolph (1799–1862) – Metropolitan improvements or London in the nineteenth century: being a series of views, of the new and most interesting objects in the British metropolis & its vicinity; from original drawings, with historical, topographical & critical illustrations by James Elmes, Public Domain, https://commons.wikimedia.org/w/index.php?curid=690930

The Royal Opera House was home to the first ballet d’action to ever be performed on the main stage. Contrary to “traditional” ballet, the ballet d’action focuses on storytelling through the movement of dance, instead of just the dance routines in typical ballet. 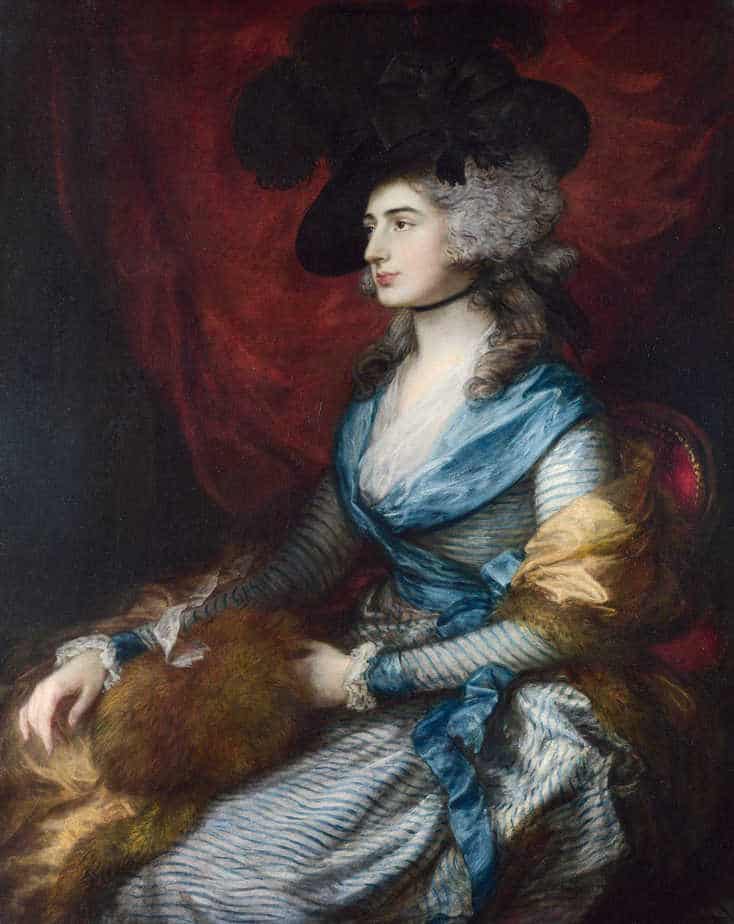 Sarah Siddons was a very famous actress and performer who had her last performance at the Royal Opera House. During her last time on stage, she gave a 10-minute long farewell speech after her performance as Lady Macbeth in 1812.

Do you want to be in the limelight? 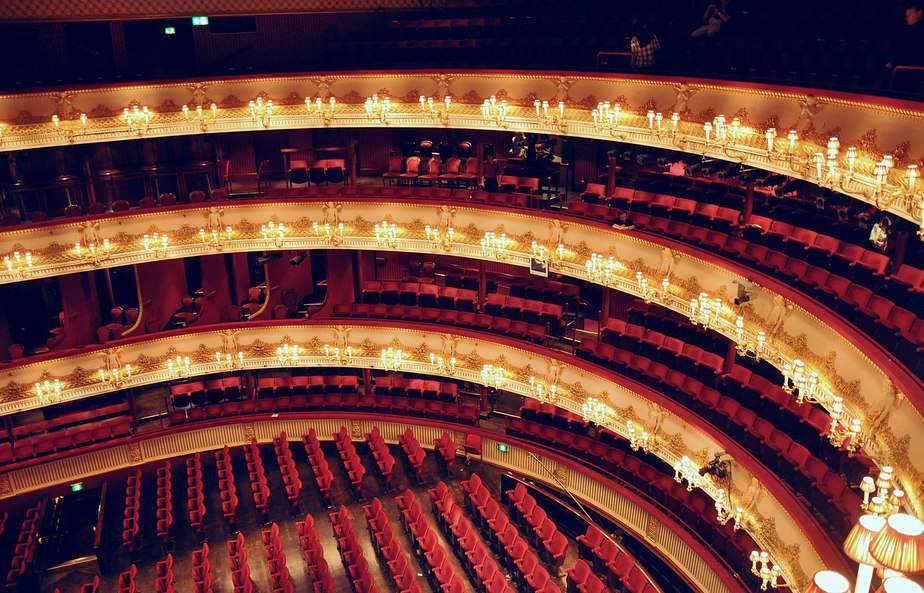 Although being in the limelight is typically referred to as a positive thing in today’s world, it actually was a sort of dangerous occurrence in the theatre. Being in the limelight referred to the backstage crew mixing oxygen and hydrogen to produce a flame to illuminate the performers on stage. Since electricity was not widely used back in the 1800s – or it hadn’t even been invented yet – there had to be some way that the audience could see the performers. Using the limelight was the only way to illuminate the singer and the actors – however, when electricity was invented, the limelight disappeared from use.

The Royal Opera House is home to an orchestra 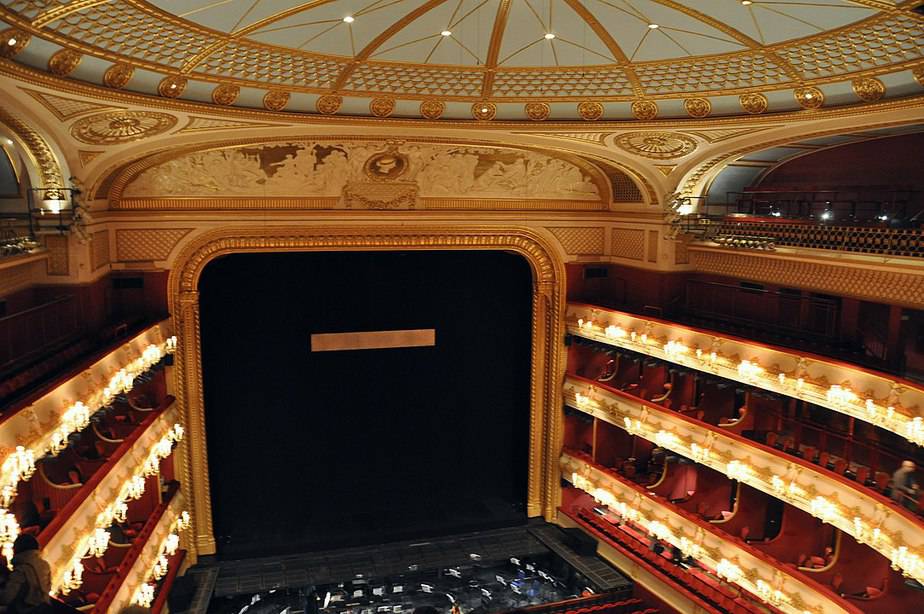