The Best Bakeries in London 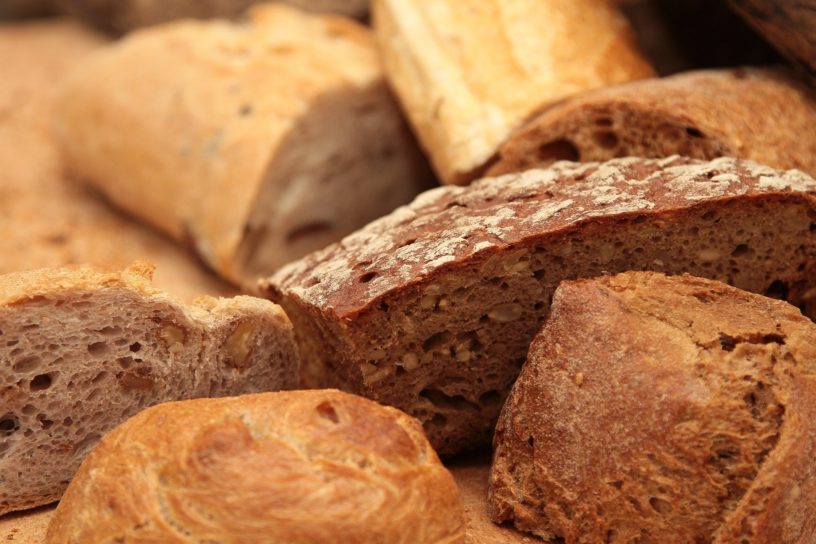 There is something very vague about the British Bakery.
After all, we all know what a French Boulangerie does. Idem for our American friends and their cake shop, or indeed bakery full of, ahem, baked goods and pies.
But what exactly, we ask ourselves, is the existentiel purpose of our London bakery. Don’t we all just buy our Hovis ‘best of both’ at Tesco and be done with it?
What an utter affront! In 2019 you need to brush up on your bread based knowledge. Use your loaf. If you can’t tell your salt dough from your brioche you’ll get laughed out of London Town in 2019.
You see, today there are so many excellent options that it just doesn’t pay to conservatively stick to taste light, industrial blandness wrapped in plastic. When it comes to spending your hard earned dough on the best bread money can buy, London has a range of incredible offerings.

Bakeries in London can essentially be divided up into the following categories :

There’s a nouvelle vague of hip Frenchies that love London and are determined to revolutionise its food scene.

It started with big names, such as Alain Ducasse at the Dorchester and Albert Roux’s Le Gavroche, but soon filtered down to cafes and simple set-ups enjoying la French touch as well.

Bakeries were a fairly obvious target. There is nothing perhaps more synonymous with France than ‘la baguette’ and ‘la boulangerie’. 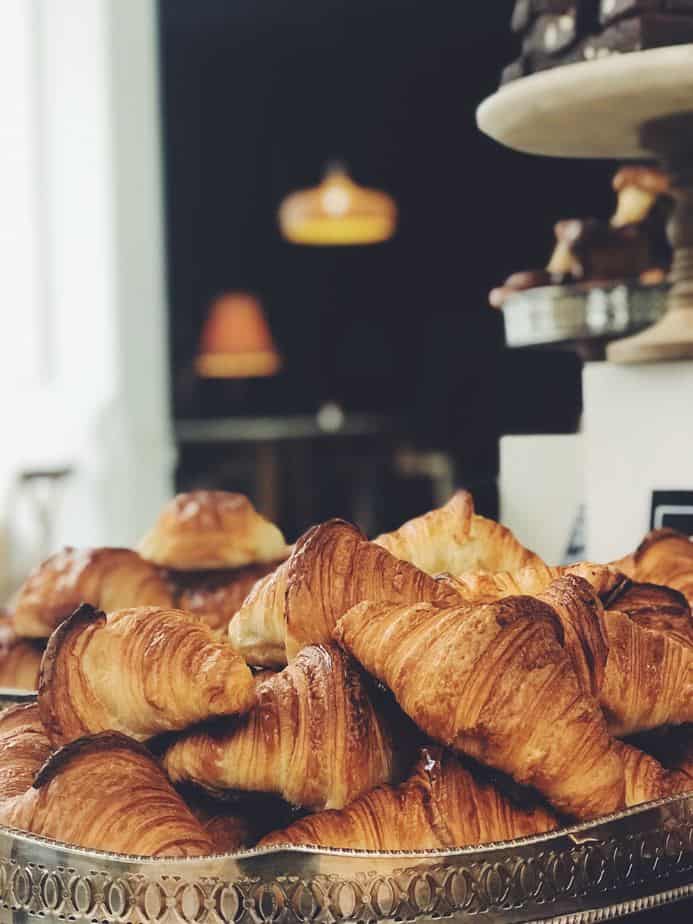 A few years back, you’d be lucky to find a decent all butter croissant this side of the Eurostar (which incidentally used to leave from Waterloo).

These days, you don’t have to venture far from the new terminus of the trans-channel train connecting us to the hexagon, before you stumble upon ‘aux pains de Papy’.

In the central, and nowadays chic, neighbourhood of King’s Cross you’ll be delighted to find this London branch of a family-run bakery chain. It offers its clients all the delights  of a solid, authentic French boulangerie/patisserie without having to actually make it over to St Pancras and cross the Eurostar departures gates.

Clientele is pleasantly mixed, enveloping those who work in the area, stopping by for their daily bread or on their lunch break, as well as anyone with a taste for proper French baking.

Best advice here is stick to les grands classiques. You shan’t be disappointed by their crusty baguettes, satisfying pan bagnats, not to mention the tempting aroma of almond croissants fresh from the oven, my preferred pain au chocolat, plus eclairs and their answer to the Paris-Brest. 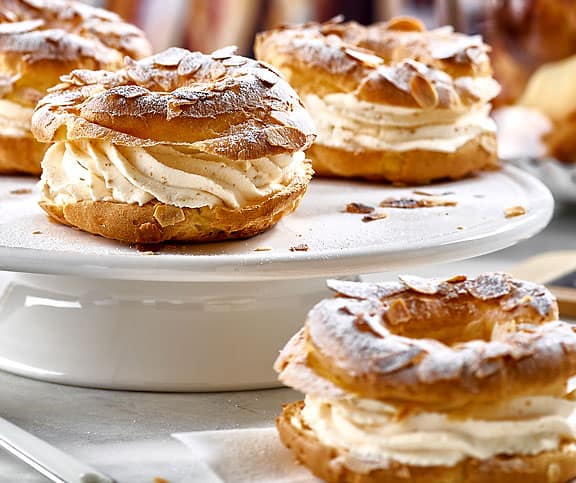 This Parisian classic is often hard to find outside France. It is comprised of crisp, thin and light layers of  golden pastry rings, which are filled with delicious nutty praline cream.

Another ‘write home about’ feature are their mouthwatering ‘bugnes’. Bugnes? I hear you say. These little sweet treats are mini-doughnuts perfumed with orange blossom water, traditionally used in the cuisine of France’s North African ex colonies.

It may not surprise you to learn that this successful outfit are looking to expand into new London territory.

Dominique Ansel is clearly brimming with pride for her eponymous bakery. You see, she did something that many pastry chefs only dream about: She invented her very own, entirely original pastry.

This wonder answers to the name Cronut.

It is a hybrid between a croissant and a donut. It takes three days to make. Stepping out onto the scene, it was hailed by TIME magazine as one of the greatest inventions of the year.

Curious as to what a Cronut looks like. Here’s one pictured. 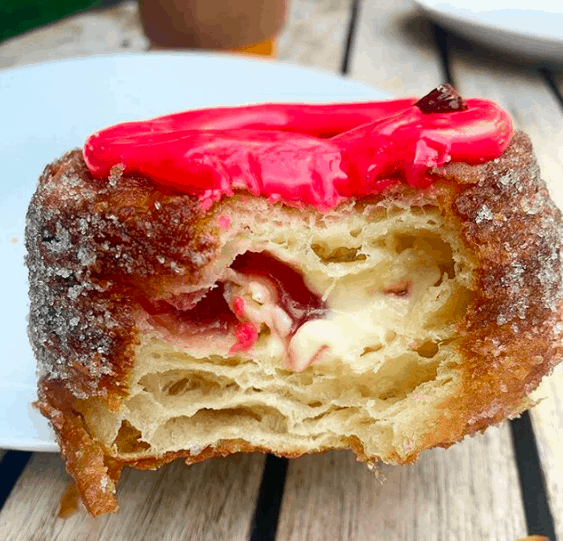 Fancy trying it for yourself? You can live that dream at Dominique’s Belgravia bakery, where you might find yourself tempted to try other creations from this terrifyingly talented patissier.

This one brings back memories!

A dear friend of mine used to have his artist’s studio right round the corner from this exotic bakery and relied heavily on Ararat Dalston for his daily sustenance. 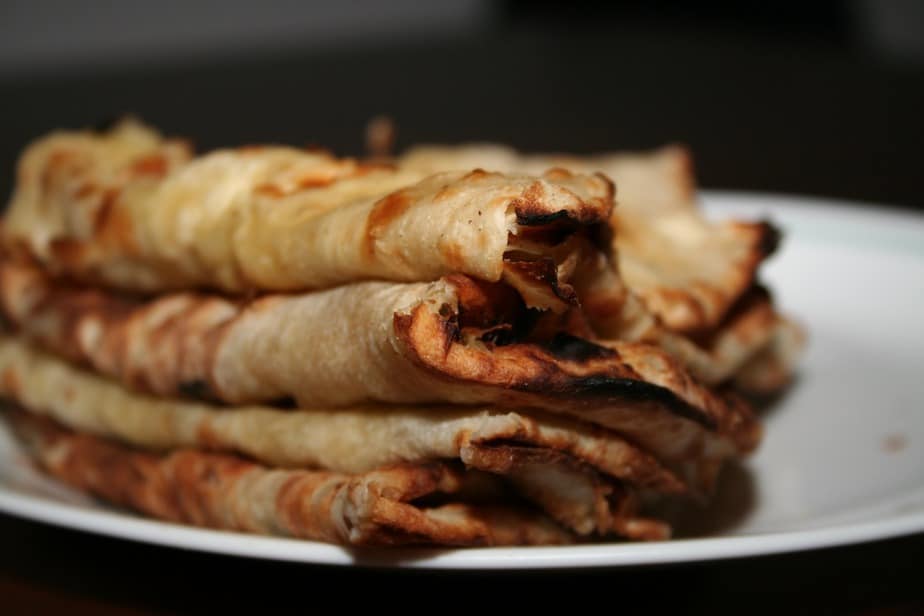 Fine, this isn’t the kind of place where you’ll mooch in for hours savouring an expensive latte on comfy cushions with your baked treats.

In fact, Ararat is scarcely more than a hole-in-the-wall set behind Ridley Road market. However, their Middle Eastern-style flatbreads (which they describe as ‘naans’ cribbing the London lingo of a neighbourhood where curries are ten a penny) are the stuff of urban legend.

Unsurprisingly word of mouth is what has made Ararat the success it is today. Their nanns have found their way into too many local restaurants and shops to name them all.

So, sidling Ridley road market, don’t forget to drop in and test one of the nicest, cheapest lunches you’ll get by miles. 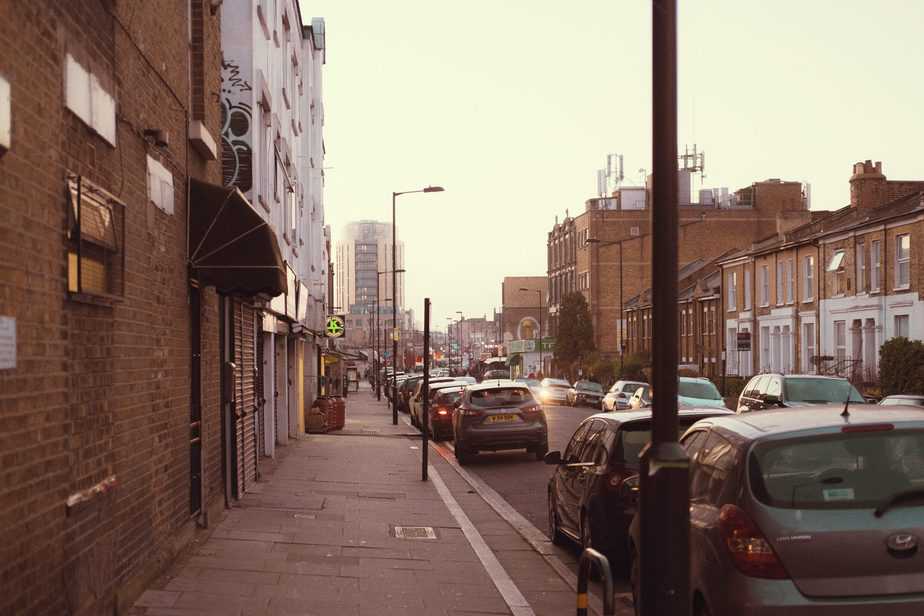 The nanns are cooked on site, then bagged up in environmentally friendly plastic bags (conviction and playing to an Eco East London crowd). If you choose to take yours away hot to bite into straight away, then it will be wrapped in paper.

Plenty of topping on offer to make it a meal: Meat, cheese and eggs are all popular choices. This substantial delicious carb fix is often enjoyed by those in the area, ahem, a little worse for wear or slightly over refreshed.

Sourdough good disgustingly trendy around the same time that self-conscious Londoners started describing themselves as ‘foodies’.

From what I can glean, a ‘foodie’ far from being fussy, is anyone British, (usually from the chattering classes), who shows above average interest and discernment for the fodder they ingest. 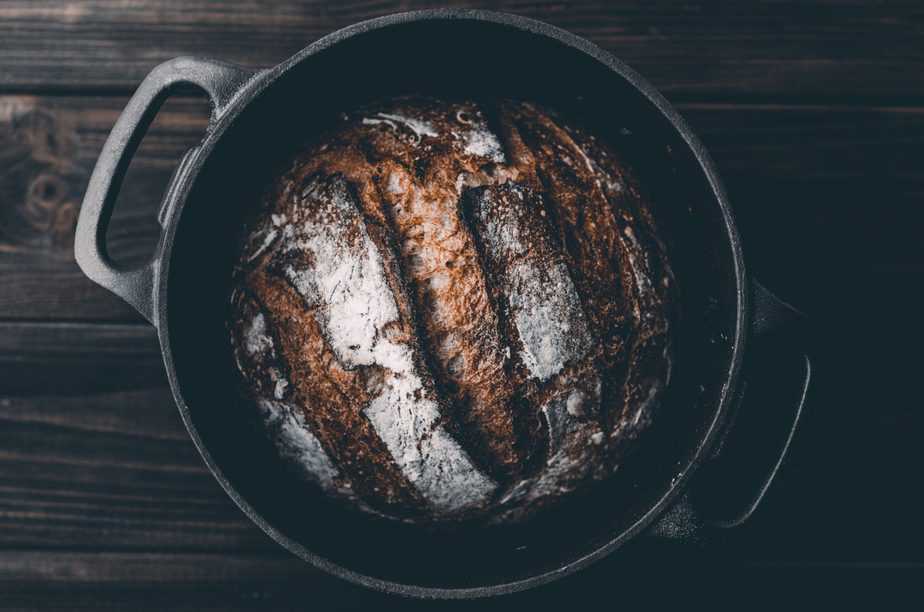 Bread Ahead in Borough Market has got it right. Their sourdough has a veritable cult following. They keep regulars happy by consistently producing the very best fresh baked fare.

Punters adored picking up their fresh loaves and peddling them home to perfume their homes so much that another niche need arose: That for a baking school for those needing a bit of kneading tips to create their own exceptional loaf.

Enlist in a workshop and learn to master the bread recipe of your choice. Lovely thing to do as a couple of with friends, and as they say “teach a man to fish…”

I could hardly let this list go out without adding a bit of royal regalia for our readers. When thinking London bakeries, it’s nice to feel that one is in good company, you know, not slumming it with the plebs. And what classier cakes could you hope for than those ordered by royal decree for the nuptials of Prince Harry and Meghan Markle back in 2018? 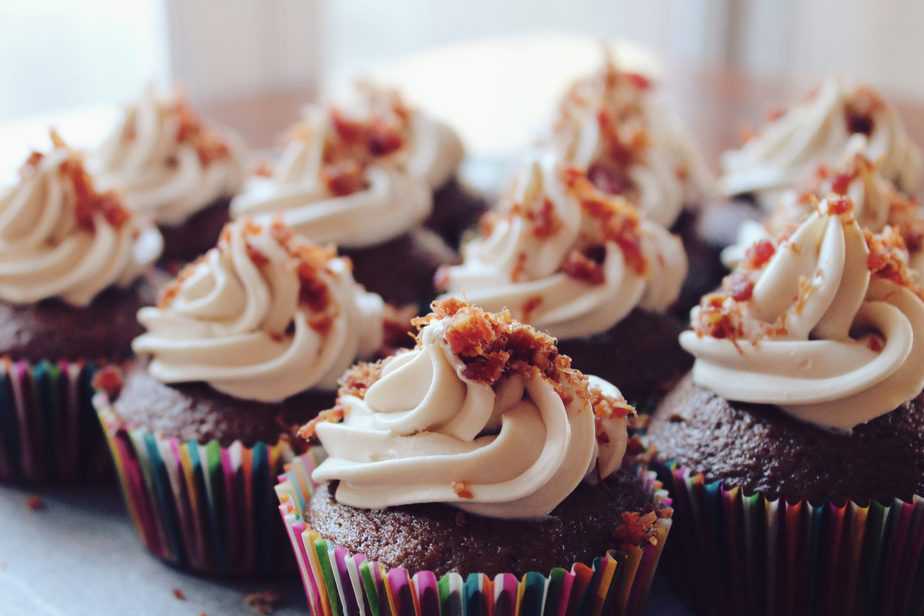 Violet is run by Californian Claire Ptak, a woman of her times whose professional skills span cooking, design and styling. It was she who made Harry and Meghan’s lemon and elderflower wedding cake.

Her bakery/café is humbley housed on a Dalston backstreet and has a laid back vibe. Their sweet treats are adorably decorated with real flowers. You should try something from their repertoire of US-style mini buttercream cupcakes, which change according to the season.

The chocolate/violet classic is pretty and perfumed, but if you like lemon you’ll enjoy the balance of the tart and fresh citrony version.

Take away or eat in and enjoy the pretty retro decor. 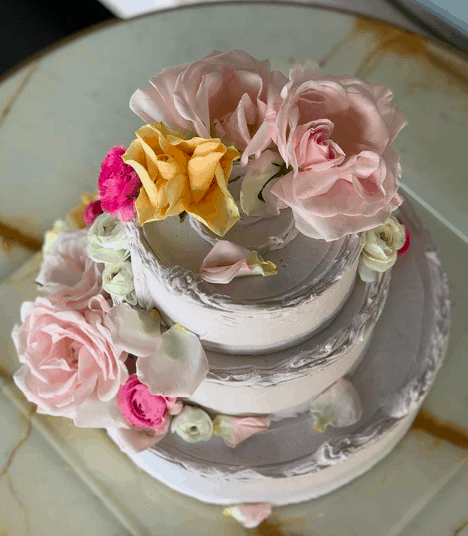 A Violet cakes creation. Photo credit by @violetcakeslondon on Instagram.

Coming here is quite the experience. You may be picking up one of the most elaborate cakes money can buy or simply enjoying the beauty of the tea salon with your own slice of heaven and perfumed Peggy Porschen branded tea.

A second offshoot has opened its doors on the King’s road, mecca for sloanes looking to see and be seen. The place to be if you come over all ‘Made in Chelsea’ / food fetish blogger. 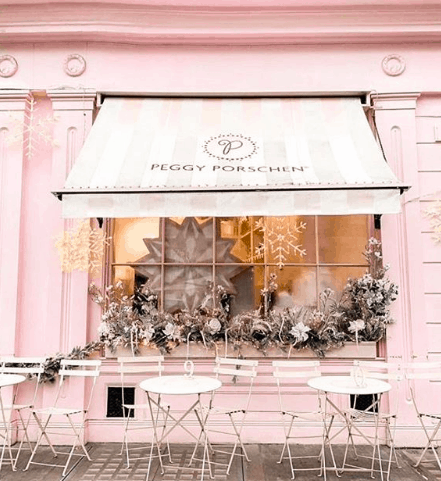 Step inside the marshmallow fantasy of Peggy Porschen. Photo credit by @peggyporschenofficial on Instagram

And just like that I’m  whisking you back to East London in a dust cloud of nostalgia for my misspent youth.

I cannot emphasise enough the cultural clout that Brick Lane bagel has.

It is more than a taste experience, it is sitting in the doorway of any house or shopfront on the stretch, weeping into your best friend’s hair at 3am, whilst simultaneously stuffing bagel into your face. 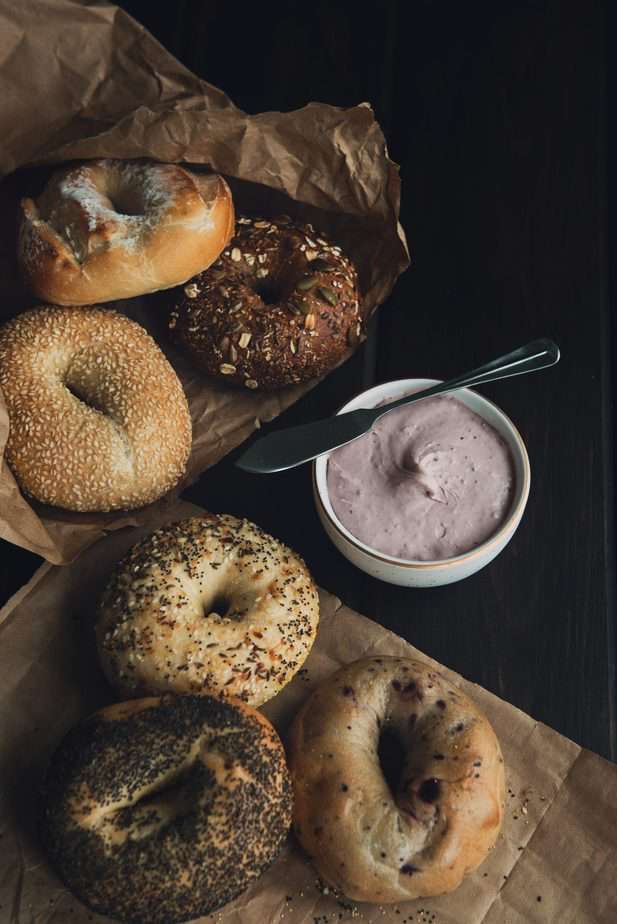 Don’t get disappointed, the beigels they sell do not look like the ones pictured. But, and I want to add a disclaimer – they will taste as good as these look if you arrive at the premises in the same state as most of the clientele.

Brick Lane Beigel Bake is open 24 hours a day.  The East End institution has been serving up fresh filled beigels to clusters of clubbers, amiable drunks, taxi drivers and those on the night shift since opening its doors in the late seventies. 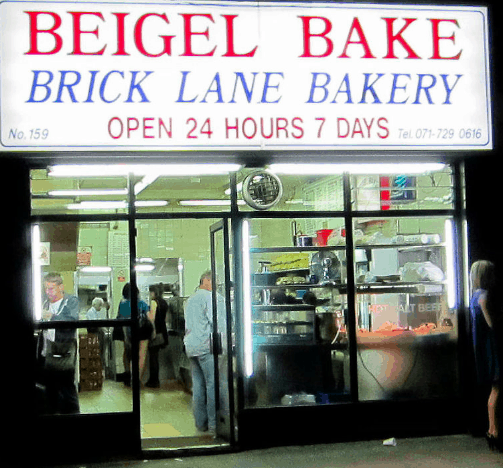 I’d recommend the smoked salmon/cream cheese classic, my standard staple. If you enjoy red meat and are craving salty protein, look no further than the salt beef beigel , carved as you wait from a slab kept warm in the shop window.

The home baked beigels are boiled first, then baked and fly fresh out of the oven at all hours of the day and the night.

You can perch at the counter if there’s any room and you want to eat in. My memories of these times being somewhat fuzzy, I can’t recall what a beigel cost. I have a vague recollection that they used to be just a pound, but obviously inflation will have got to the best of them, this wonderful establishment not unscathed. Plus my info is all pulled from early noughties nights, not up to date.

Greggs is the ultimate guilty pleasure that everyone loves.

Once assumed the preserve of construction workers and the morbidly hungover, Greggs bakeries tended to inhabit working class neighbourhoods. 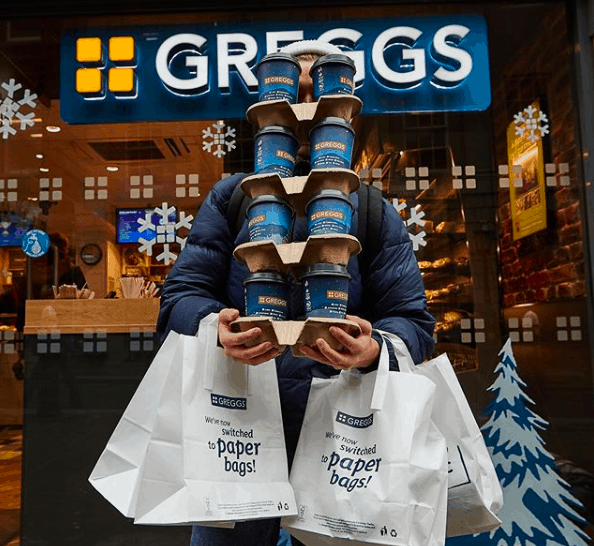 So, what do we go to Greggs for? It’s not for those seeking pretentious artisan quality, nor cool points as they leave their Hackney Bakery/Brewery/Concept shop with an artfully wrapped loaf nestled photogenically in the crook of their arm.

Greggs is a bastion of basic, unpretentious childhood comfort food: Sausage rolls, a cornish pasty, a box full of custard donuts. All these as well as seasonal favourites, piping hot drinks and fresh as you like ’em sandwich bloomers (probably some of the cheapest in town if we play favourites comparing with Marks and Spencer and the Boots meal deal). Bonus, it’s all made fresh to order that day.

Yum! No wonder London bridge optimistically put a queuing barrier outside the bakery to control crowds. Get real – go to Greggs!