A Visit to the Tate Modern in London 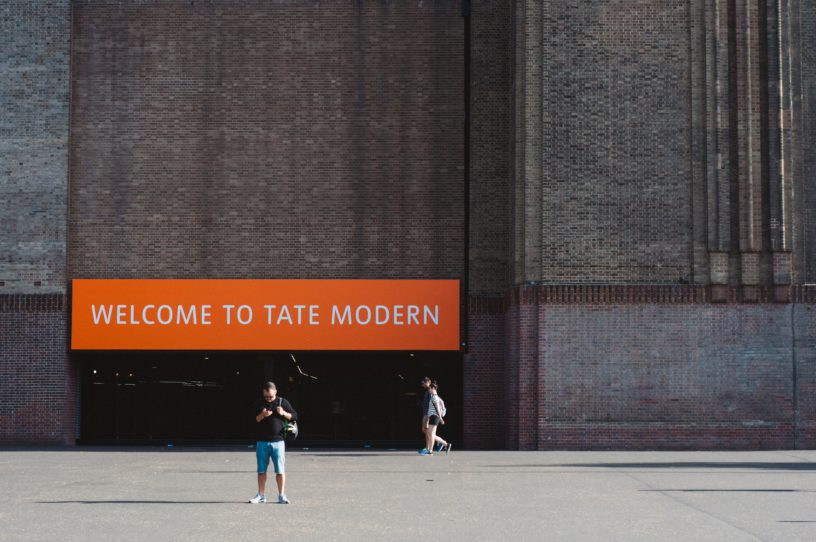 A Visit to the Tate Modern in London

There are few museums I’d recommend to everyone visiting London. Museums in the first world are so divided when it comes to taste and content, that people need to flock where their interests lie and leave out the rest.

The Tate Modern, however, has something for everyone. Even though it’s dedicated to modern art, I feel the curation of this museum has a very unique way of capturing the attention of even the most unlikely of visitors. 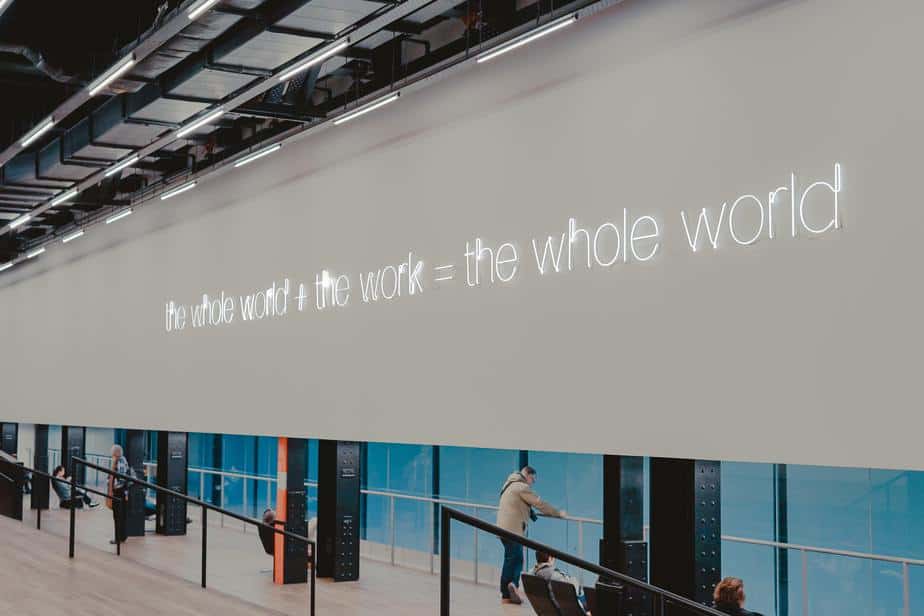 If you’ve made it to this page you’re likely already halfway to the entrance; here is everything you need to know prior to your visit to the Tate Modern in London.

OPENING HOURS: Monday to Sunday — 10am to 6pm

What is the Tate Modern in London

The Tate Modern is, arguably, the most famous modern art museum in the United Kingdom.

It is one of five Tate establishments across the country; the other four being the Tate Britain, Tate Liverpool, Tate St Ives and Tate Online.

The unique space chosen to house this museum falls in the Bankside neighborhood in Central London. It is built into an old power station that closed down in 1981, leaving opportunity for the Tate to sweep in. 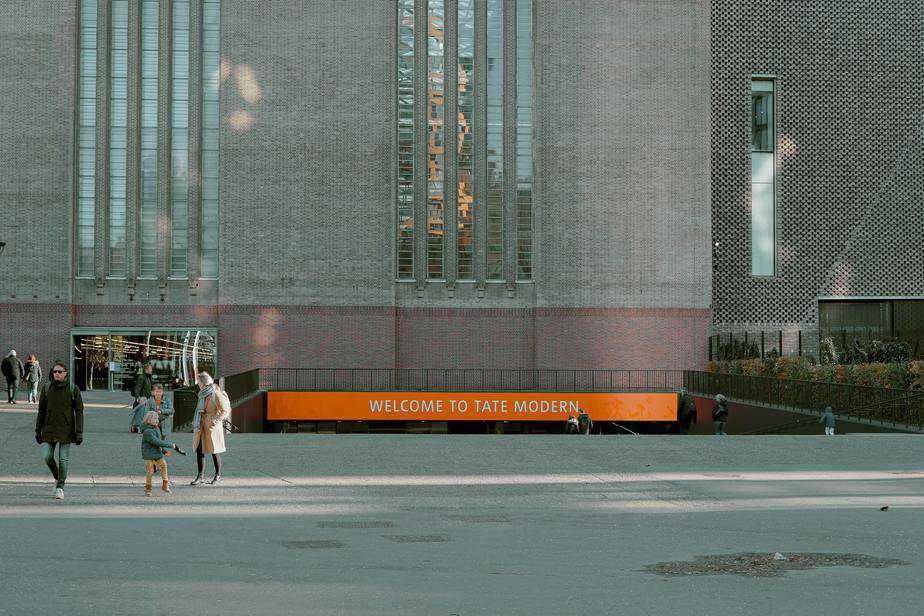 Plans for museum construction within the abandoned lot were set in motion come 1995, and the museum was only eventually completed in the year 2000.

The Tate Modern is one of the biggest modern art museums on the planet. After it’s opening in 2000, the Tate began attracting more visitors than originally expected, posing need for an expansion project almost immediately.

This project was put into works by 2004; it added around 5,000 m2 of new display space, almost doubling the size of the original museum. It’s a work of art, both architecturally and content-wise. 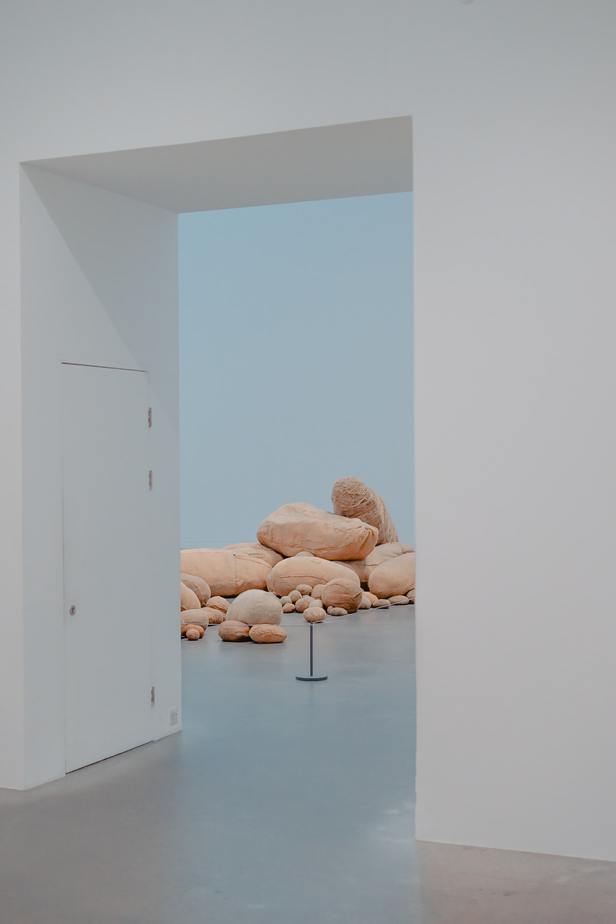 Galleries at the Tate Modern in London

The works in the Tate Modern are pieces created anytime between 1900 and the modern day. This is considered to be the standard time lapse for modern and contemporary art.

The Tate Modern holds gallery spaces on the 2nd, 3rd and 4th floors of The Boiler House. Each floor is split into grand wings, and each wing holds around 11 giant display rooms in each. There is also display space between the wings that are not counted as rooms. 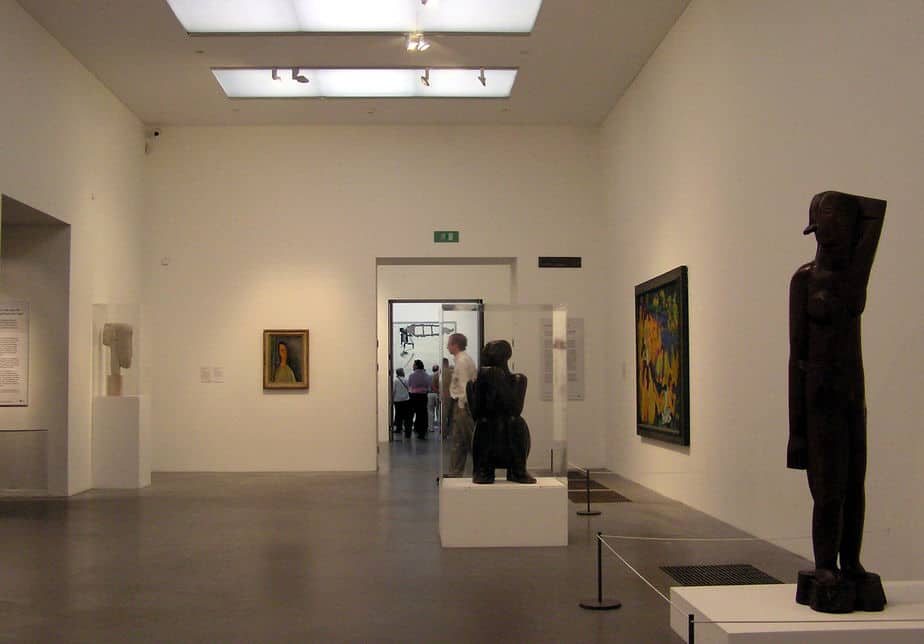 The Boiler House is where you’ll find the oldest works in the Tate, with pieces dating back to 1900.

The Switch House has 11 floors dedicated to art. The floor numbered 0 contains the old factory fuel oil tanks that were converted into galleries of their own for creative installations and art exhibits.

The Switch House holds artworks from the 1960s onwards. 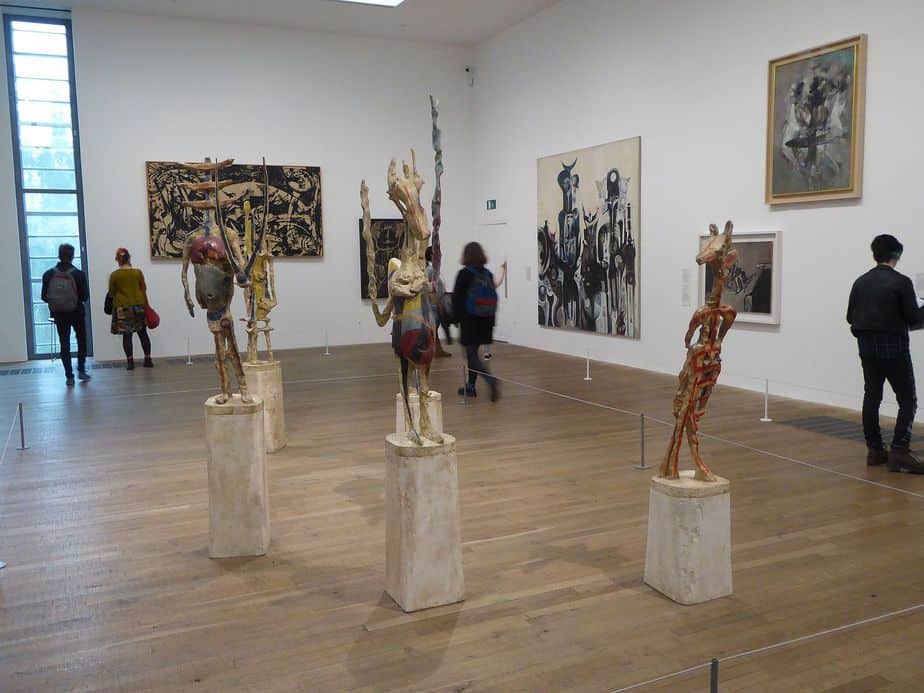 The Turbine Hall connected the Boiler House to the Switch House. It’s the massive central factory space that spans six stories upward, with no room divisions between them. It’s one great, grand hall suitable for displaying oversized artworks that don’t fit elsewhere in the museum.

Exhibits at the Tate are a mix of permanent and temporary collections. Most temporary exhibits take place in the Turbine Hall, and if you visit yearly you’ll notice the works are constantly rotated. 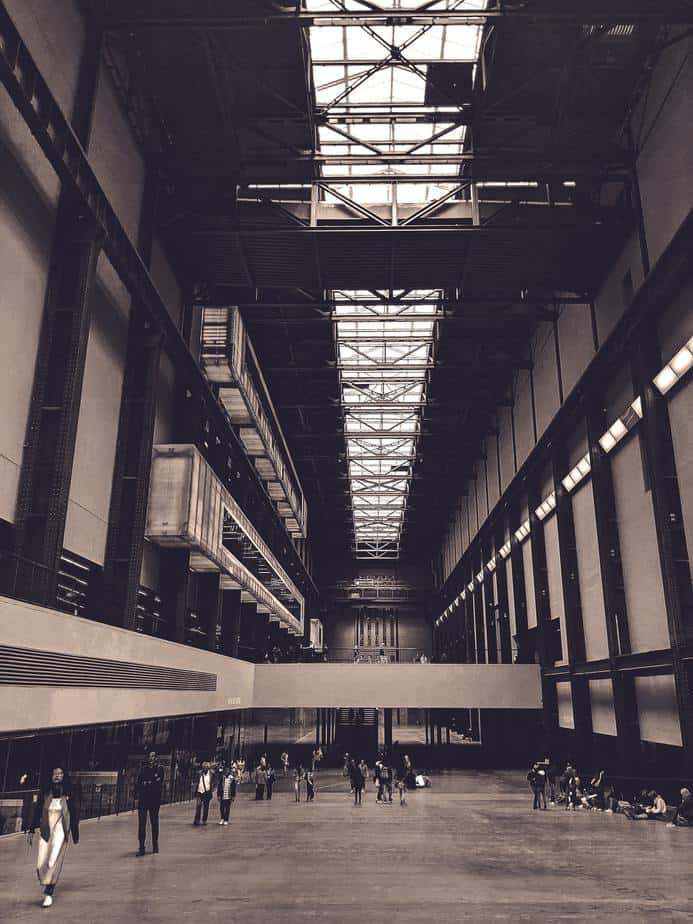 Seeing the Tate Modern in under a day is largely impossible; it is comparable to the Louvre Museum in Paris, one that you have to visit multiple times to consume in its entirety.

Other Attractions at the Tate Modern in London

The Tate Modern has so much space that it is able to house a number of other facilities in addition to the art.

One of the tanks I mentioned on level 0 is actually used solely as a performance space. The program of works here is forever changing, with the facility being booked out years in advance. There is sometimes even an entrance fee to get in. 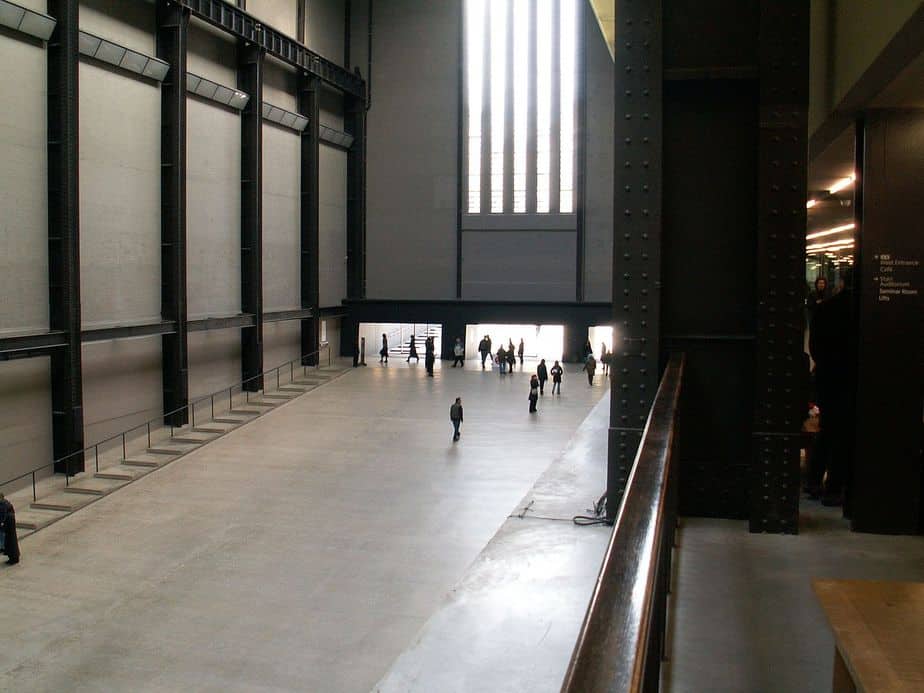 Visitors to the museum need not worry about how they are going to make it through the day refreshment wise. The Tate houses a bar, a cafe, a restaurant, a coffee shop and a members-only lounge.

There are also a number of bookshops throughout the museum where one can purchase art books and memorabilia to remember their visit.

Outside, there is a community garden that is open to all. 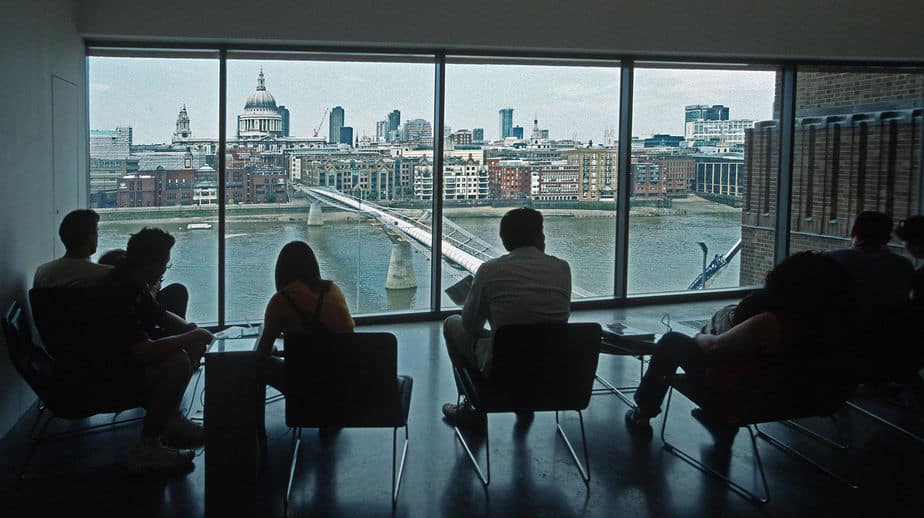 Best Time to Visit the Tate Modern in London

This is a year-round attraction, and there is really no “best” time to visit.

Personally, I love London’s museums when the weather is bad, be it the dead of winter or simply a rainy day in the summer. There is a subtle guilt that comes with spending a day of good weather indoors in London; if you’ve been here a while you’ll know what I mean. 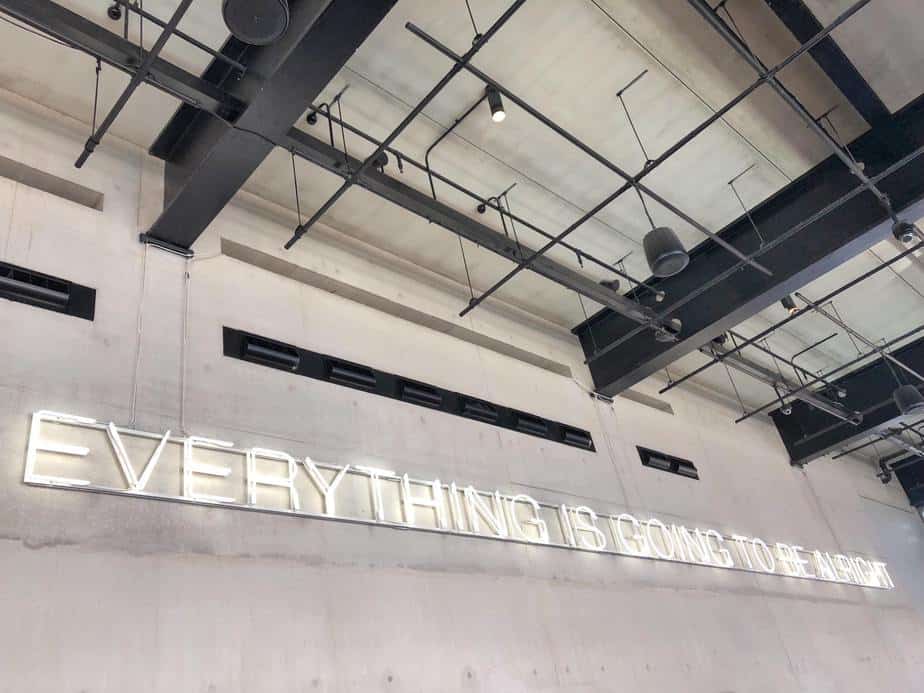 The best time to visit the Turbine Hall would be anytime between October to March. This is when their most important exhibits of the season will be on display.

One thing to look out for is something known as the Tate Lates. This takes place on the last Friday of every month, and the Tate Museum comes to life until late into the evening via musicians and artists who transform the space into an array of film screenings, musical performances, discussion panels, food stalls and more.

These evenings as usually themed, with events in the past looking at topics such as women in the arts. Tate Lates are always free to all. 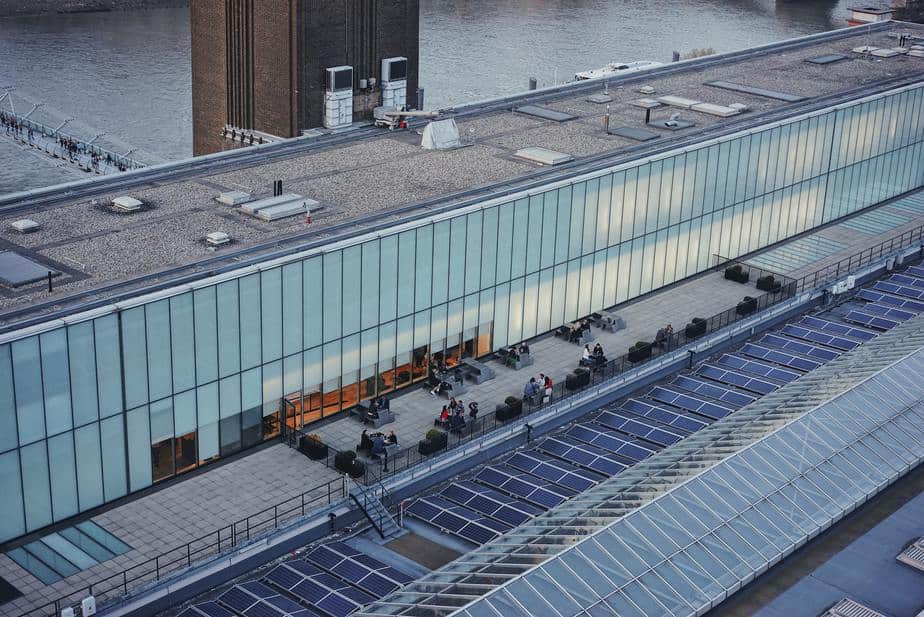 Since you’re in the center already, considerer adding a guided walking tour to your museum excursion. This will take you through the iconic streets surrounding the museum, giving you a glimpse at the history and architecture of London along the way.