The Best Way to Enjoy London During The Summer 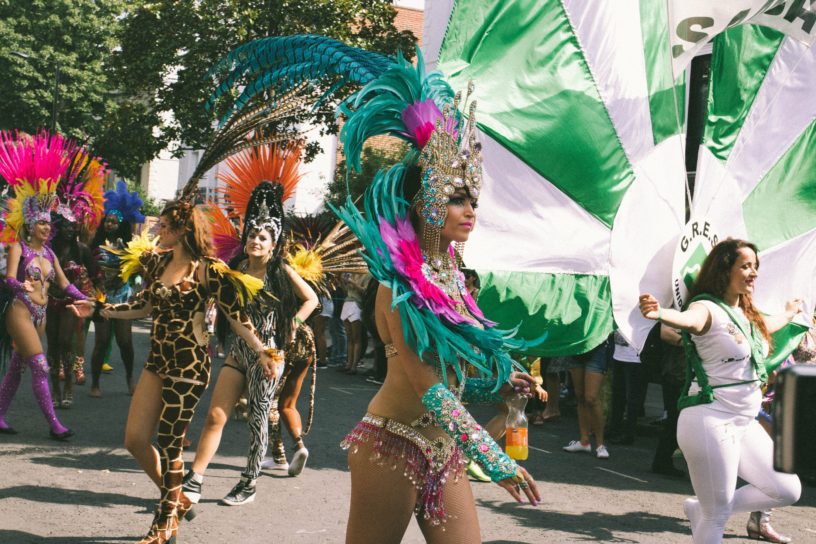 So, I can’t guarantee you blue skies and 30 degrees celsius.

What will you get visiting London in the Summer?  A fun-filled programme of loads of stuff to do.

I’ll walk you through some of my favourite parts of town, especially suited to summer in the city.

Then we’ll look at iconic events, activities and happenings and where the Londoners go to enjoy their much loved city in the brighter months.

Impossible to mention Summer in London without a nod to London’s most famous and flamboyant street party.

Notting Hill Carnival is the stuff of urban myth and legend. The costumes and colours are exquisite and inspire old and young, Londoners and visitors alike. 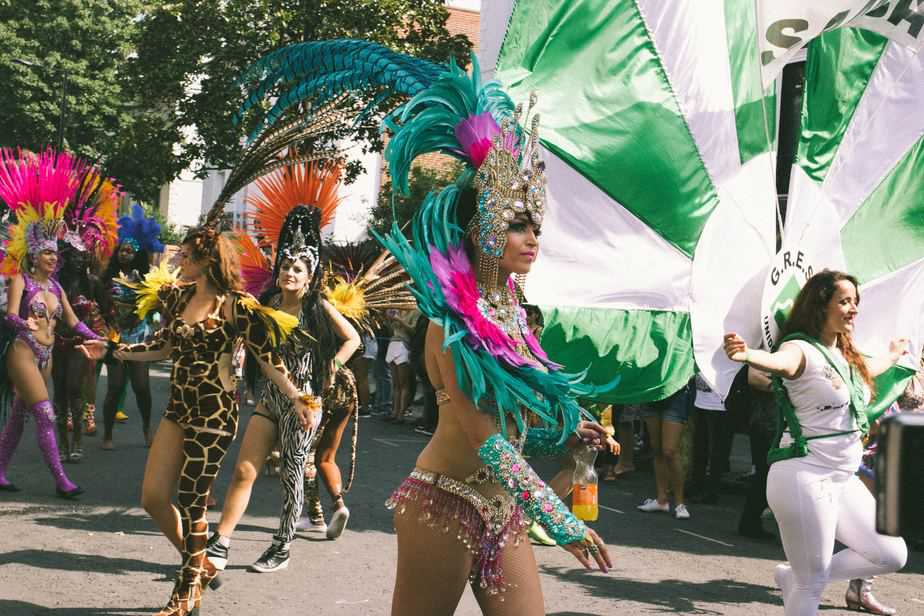 I vividly remember walking back from my ballet just streets away from Carnival territory on Pembridge Crescent and voicing my desire to partake or perform in the Carnival to my mother.

At the age of seven or eight Notting Hill Carnival had already captured my imagination!

Notting Hill Carnival happens every year on the last weekend of August.
As this includes the August bank holiday on the Monday, this leaves ample time open to party.

Often the Sunday afternoon and celebrations are the most fun, especially if you sneak off the main thoroughfare and into side street parties. 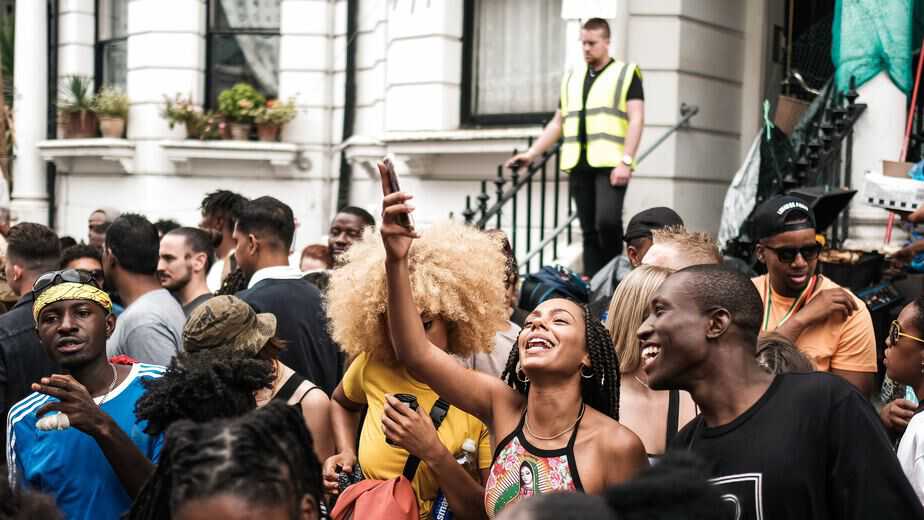 Londoners enjoying carnival. A police presence has been in place since rowdier carnivals in the 90s. Photo credit by Glodi Miessi on Unsplash.

Obviously, it goes without saying to keep your wits about you. For all celebratory Summer London and its good vibes, there will be a few bad apples there looking to leave having relieved relaxed carnival goers of their wallets, hastily stuffed into a backpack or back pocket after buying Jerk chicken.

That reminds me – the food.

You will eat well here. Look out especially for all that aromatic Rhum, fried plantain and Caribbean chicken and rice dishes.

The Notting Hill Carnival 2020 dates are 30 and 31 August, with more celebrations on the eve of the carnival on 29 August.

Watching Shakespeare in the Open Air is one activity to put up high on your list for London in the Summer.

If English is your second language, which you speak fluently and work in, then I’d recommend picking up an abridged copy of the play you’re about to see or googling a quick summary online. 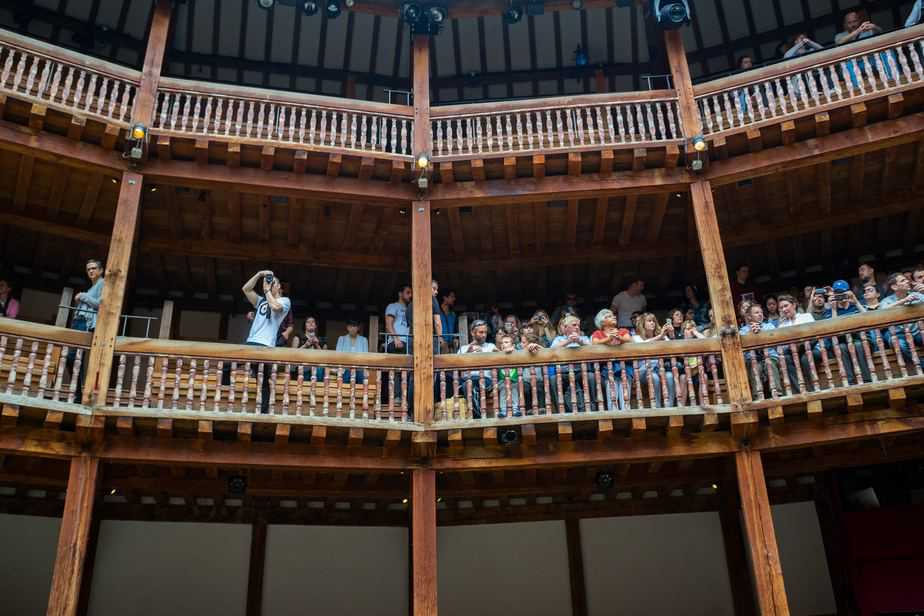 The Globe London. Photo credit by David Anderson on Unsplash.

This will add to your enjoyment on the day. I’d wager a bet that the majority of native Anglophones wouldn’t have much of a clue what was going on 100% of the time in the plays and pieces they hadn’t studied at school.

But allusive language aside, Summer Shakespeare is such a great tradition and there is something about appreciating it in the open air which helps it come alive.

The Globe London, (pictured above) is an open air theatre hailing distance across the river from Saint Paul’s Cathedral.

History wise the Globe is pretty impressive: The original Globe was built in 1599.

A modern reconstruction named “Shakespeare’s Globe” opened to the public in 1997. It’s located just 230 metres away from the site of the original theatre.

Their site advices first time visitors: “The Globe Theatre is open–air. The temperature is dependent upon the weather. Please dress accordingly.” 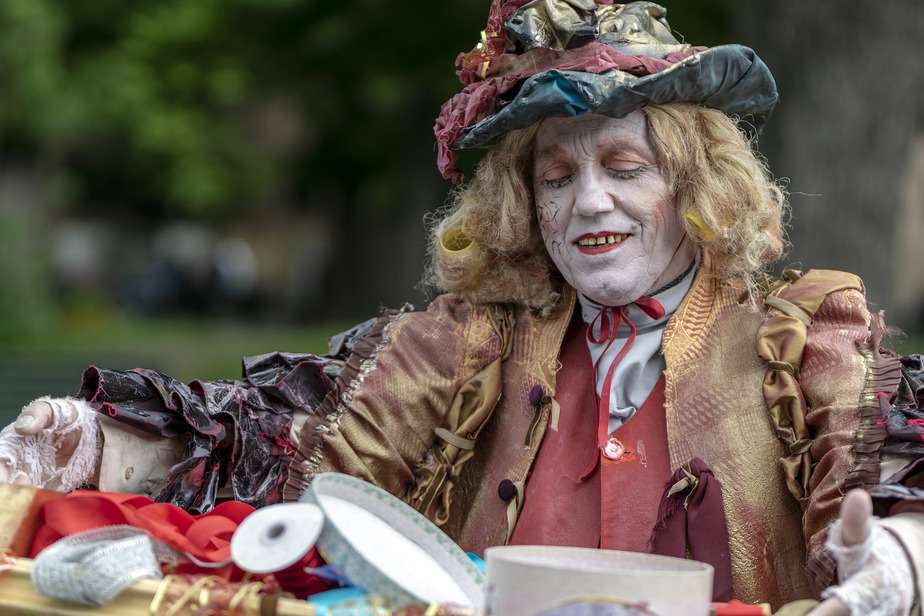 An actor in an outdoor classical theatre production. Photo credit by Mirceaianc from Pixabay.

Oh, a few years back when I was in my mid twenties the Globe were doing Standing Tickets for £5 – a fiver! Really, well worth it to watch a world class performance of Shakespeare.

Do note, you need to be in good enough shape to stand for several hours, otherwise, best go for restricted view seats, a little under £20, or look into their other concessions. 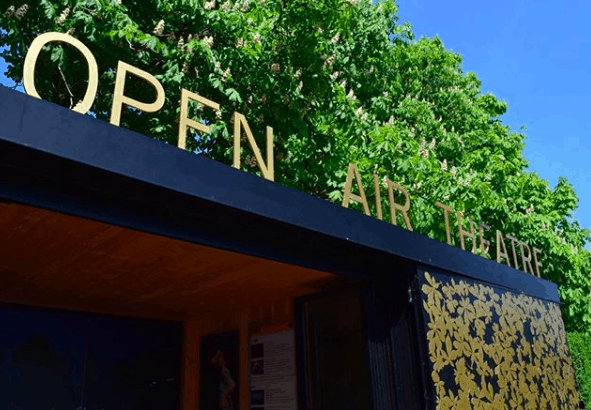 My second Open Air Shakespeare tip for your Summer in London would be Regents Park.

Here, you’ll feel the relaxed vibes of being in a park, maybe bringing your own picnic to enjoy before the performance, or taking advantage of the bar. You can dress up, dress down, the seating is tiered, so you’ll get a pretty good view: A lovely event with a difference.

This is something that you won’t hear me say a lot, but what brilliant Town Planning!

Whoever designed Southbank understood a thing or two about using space and how people would interact and move around and through it in their leisure time. 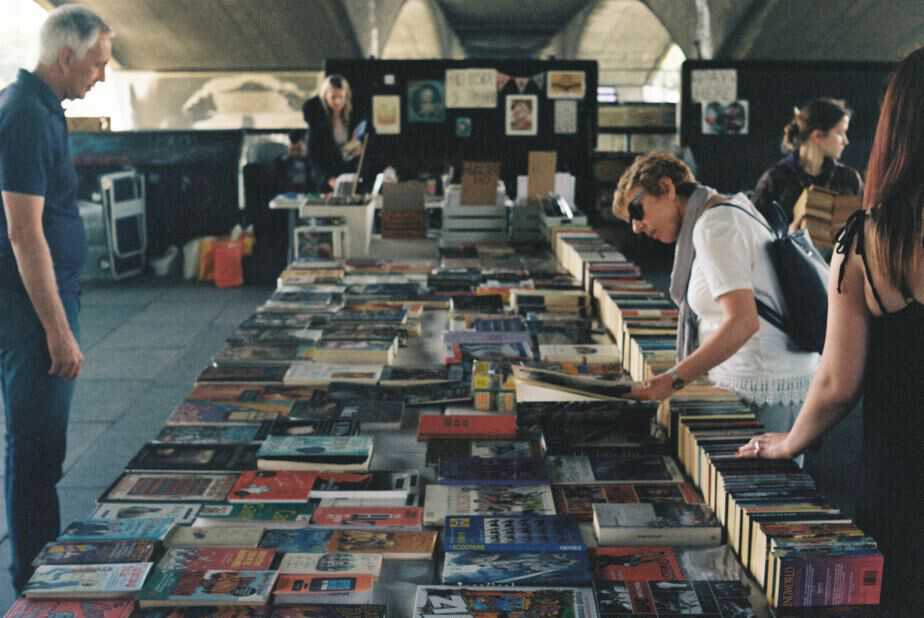 Southbank and the book stands in front of the British Film Institute. Photo credit by Charlie Read on Unsplash.

You are just so central at Southbank. Arrive from Waterloo or Embankment tube. In fact, you could easily walk down from Soho in twenty minutes of less.

As spots go to group together friends for Summer fun after work, you can bet this one’s a tried and tested good fit.

Once here you may want to enjoy the pop up astroturf and deck chairs which often crop up in front of the National Theatre in the Summer. 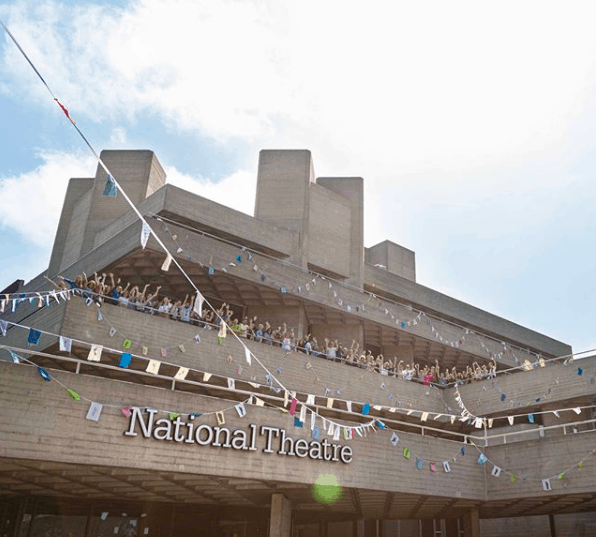 Over 600 flags flying from the NT to celebrate the 70th Anniversary of the Declaration of Human Rights. Photo credit @nationaltheatre from Instagram.

Another great address is the BFI, (British Film Institute). Here you’ll enjoy, if needs be, a heated terrace. They have a great selection of snacks and artisan beers.

You’re not too far down from the Tate Modern, if you fancy an exhibition, or a meandering gallery wander. Find out more here.

If you like classical music the nearby Queen Elizabeth Hall and the Royal Festival Hall are offering a variety of recitals. More details from the Southbank Centre.

I included this one because the Serpentine Gallery always makes me think of Summer in London due to their renowned Summer Party. 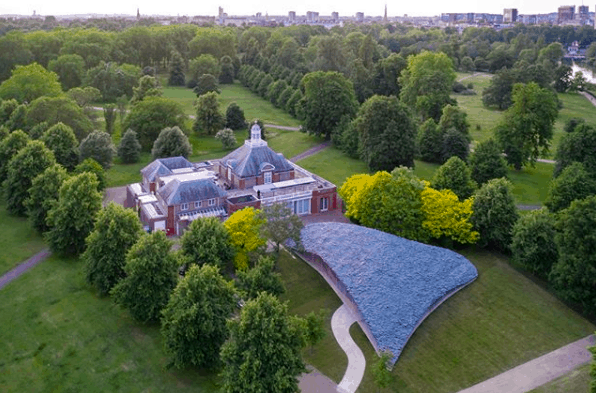 I find the Building itself strikingly beautiful.

Here’s what the Gallery had to say about it, quoting Junya Ishigami in conversation with Hans Ulrich Obrist:

“Because the Serpentine Gallery is situated in Hyde Park, I wanted the building to be part of the park’s scenery, to be a part of the landscape. In trying to come up with ways to integrate or link the scenery and architecture with the landscape, I wondered why primitive buildings or architectural structures, regardless of culture or region, have something in common, such as the stone roofs you see both in Japan and Europe. I came to the conclusion that it was because primitive buildings use natural materials as they are, without processing them, linking them to the surrounding landscape.”

I’d recommend that you leave at least half a day for your visit to the Serpentine.

Good, clean fun can be had on the boating lakes nearby: Hyde Park has a fleet of rowing and pedal boats which operate on the famous Serpentine.

Further details to help plan your day out:

Boating on the Serpentine opens from April through until October 31. 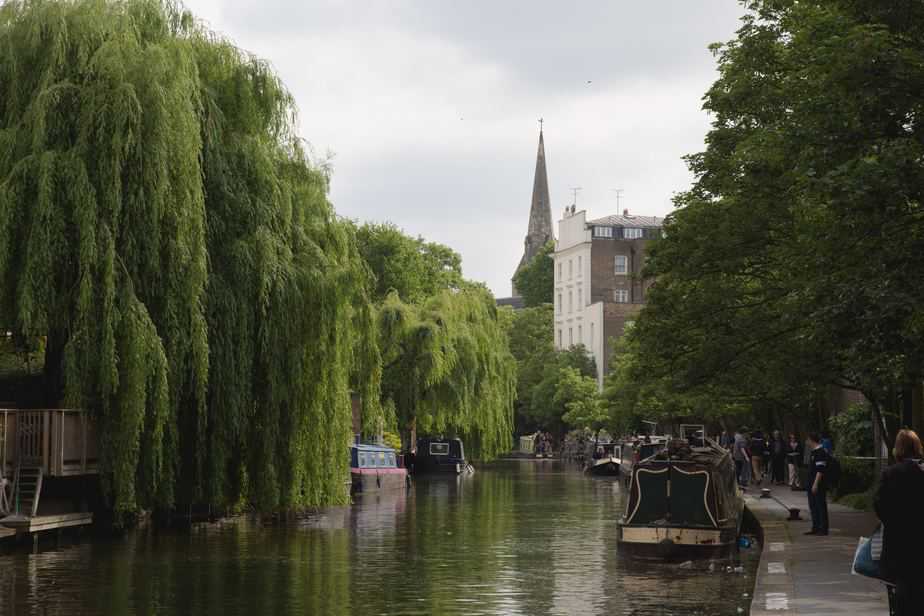 Sticking with the boat theme, (can you tell I like boats and may have spent two years living on one?)

London’s canals offer some of the best spots to enjoy the city in the Summer.

It really doesn’t matter whether you’re team #EastLondon or #WestLondon – everyone’s got their canals, the waterways running through the city like veins; proffering peace, calm and picturesque scenes of Dutch barges and weeping willows.

So where to go walking if you’d like to drink in this atmosphere?

The above photo is taken on the Regents canal. This canal which is 8.6 miles long takes in parts of London as diverse as Little Venice down to Camden.

Little Venice is dotted with brightly coloured canal boats. It is quaint and breathtakingly picturesque on a clear day. 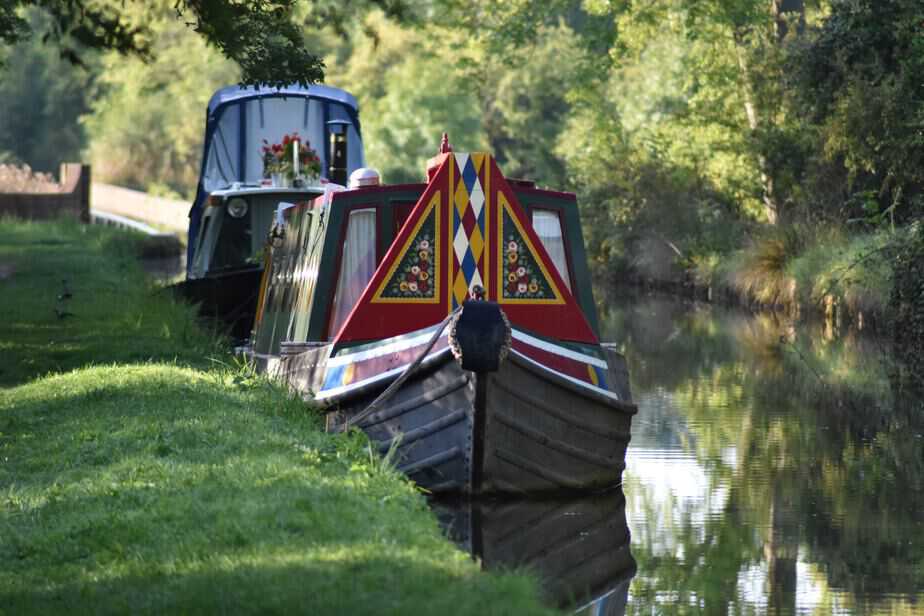 There are small cafés and restaurants where you can eat overlooking the canal, but just a few years back it remained remarkably uncrowded.

This stunning scenery is less than 20 minutes away from Oxford street and yet you feel like you’re in another world.

When the canal reaches Camden’s Locks you are thrust into a completely different but equally pleasant atmosphere: Bustling with cafes, bars, craft stores and clothing shops, not to mention one of London’s most famous markets.

Here you’ve officially arrived in the centre of several subcultures.

You might want to plan a route map for your day out, although I’d recommend wandering between the places mentioned.

If you need more details, check out the Canal River Trust with their wealth of knowledge and resources.

Drinking along the river Thames has to be one of London’s greatest Summer pleasures.

Get to the pub in good time to bag a pew and order in a pitcher of Pimms.

You’ll be pleased you did as you’ll have room for all your party – pups, prams and whatever else included and won’t be left standing. 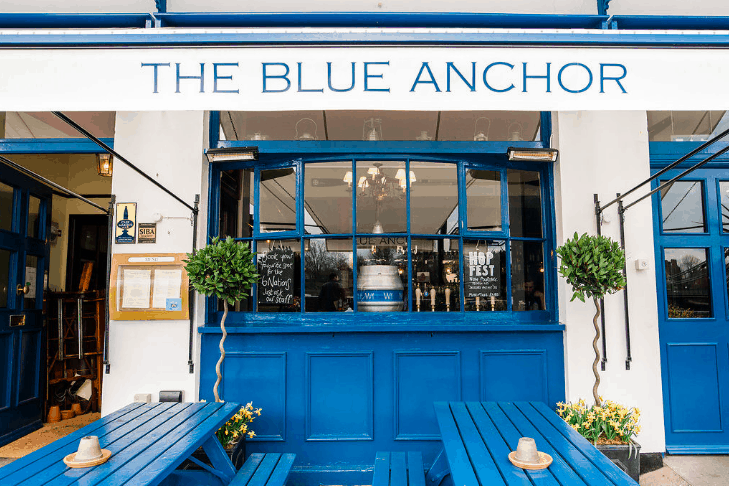 I rather like the Blue Anchor in Hammersmith on the walkway down towards Chiswick. Here, you’re really only just outside central West London and can get back on plenty of lines from Hammersmith station, and yet it feels expansive and open.

If you were looking to feel less guilty about your pub food and boozy indulgence, you could start your session off with a walk  or cycle along the river banks. 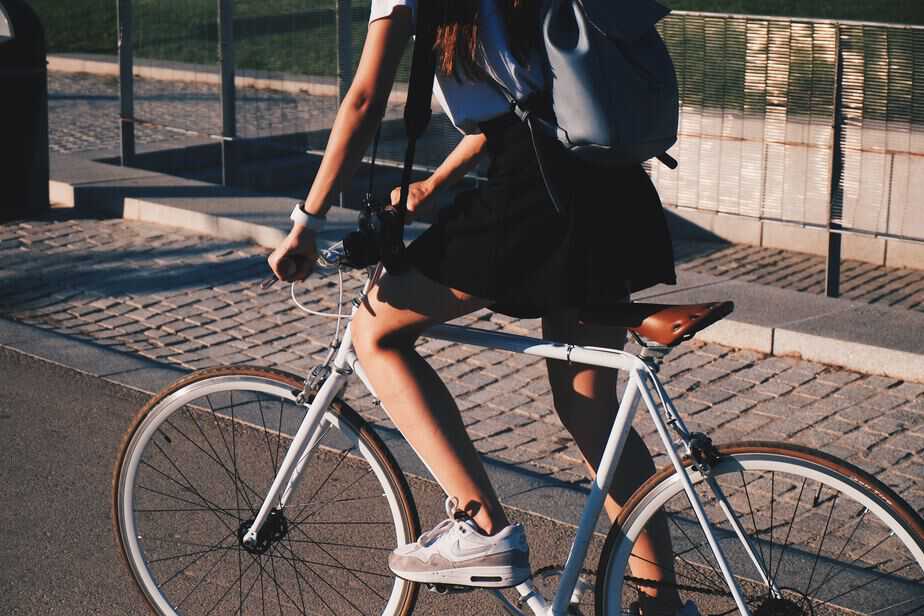 Further down the river you’ll have even more options along the way passing by Chiswick and on into Richmond. That’s if you decide to go Pub Crawl.

Music festivals have been part of UK Summer culture since Woodstock.

In fact, it’s many other of our European neighbours with sunnier climates who have followed suit in the last few years.

Granted these grand gathering and field festivals weren’t conceived of with London in mind, but the city actually lends itself incredibly well to them, given its wealth of green space and parkland. 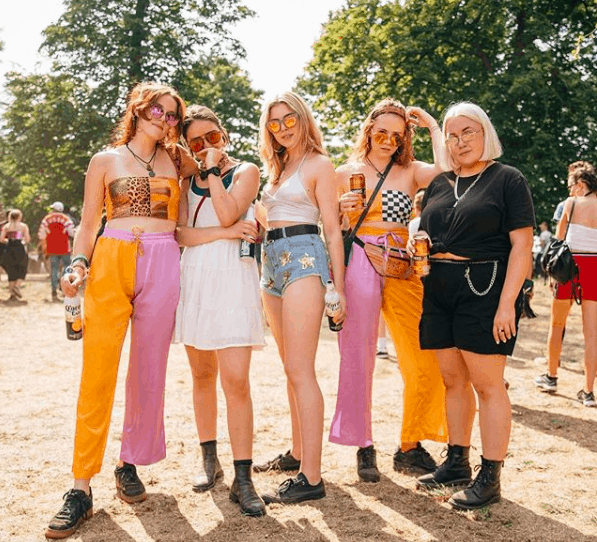 Originally in the people’s park of London, Victoria Park. As it expanded it outgrew that location and Tower Hamlets turned down their application. Blocked by Lambeth residents, in  2018 the event moved to Gunnersbury Park, London.

The festival lasts for two days, and is full of bright young things enjoying drinks and ahem, potentially some recreational drugs, alongside a line-up of great music.

I went to Lovebox in 2015 and whilst the weather held up and it was well organised, it felt rowdier and harder than the field festivals that I so love out of town. One to do in a large group in your twenties. 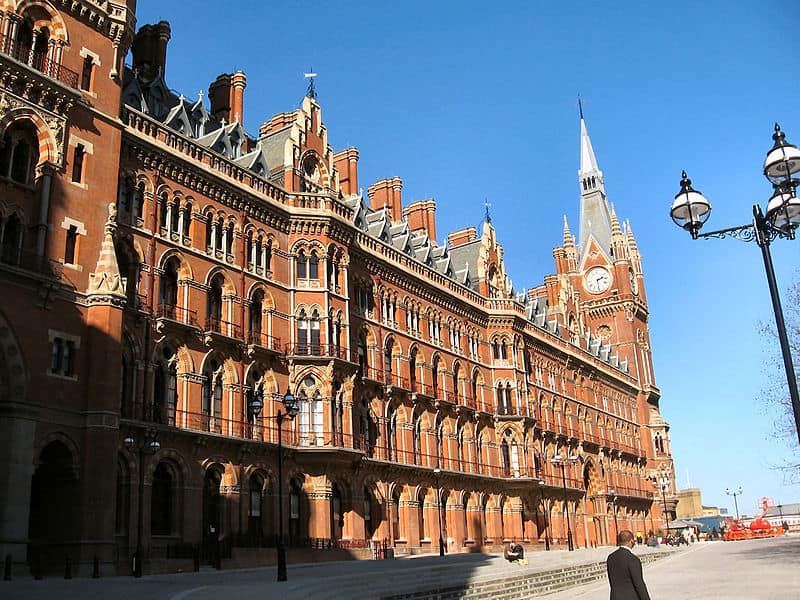 So enjoy your time in London in the Summer.

It’s not like other cities you might have a Summer fling with – London’s energy and entertainment will have you coming back for more before too long.

There really never is a bad time to visit Lady London.

If you want to know what I’d recommend for a London trip in the Winter, then you can keep reading here.