Top 8 Facts about the Rossio Square in Lisbon 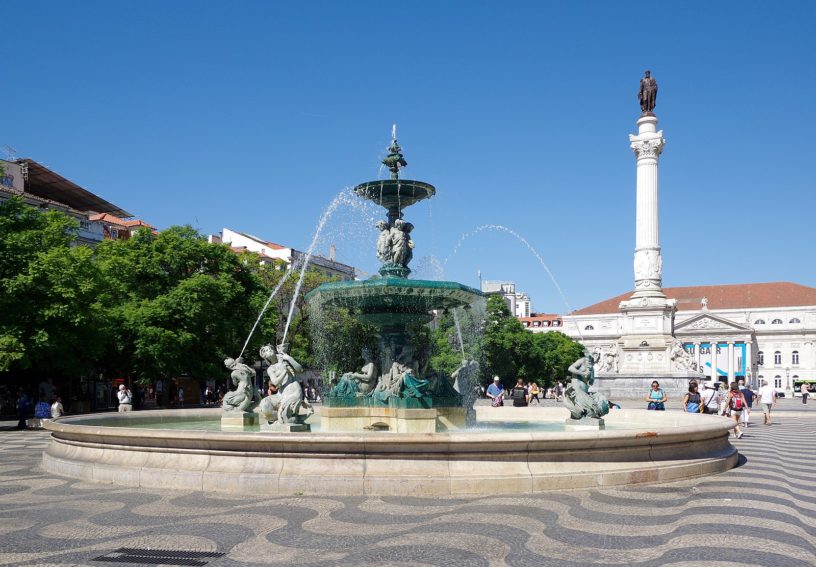 Top 8 Facts about the Rossio Square in Lisbon

Situated in the heart of downtown Lisbon, Rossio Square is the place to see and be seen if you’re on your first visit to the Portuguese capital. This vibrant square is where people from all over the world gather to enjoy the sun, drink delicious coffees and bask in the rapidly changing light that hits the various municipal buildings that frame the space’s outskirts.

Here are 8 things you likely didn’t know about Rossio Square in Lisbon:

But foreigners can’t seem to wrap their tongues around that cedille in Praça, so Rossio Square quickly became the go-to name for this communal gathering spot.

The word “rossio” actually simply means “large square” in Portuguese, so when we say Rossio Square we are essentially saying “large square square” — who would have thought?

While the buildings that surround the square are quite the sight for sore eyes, the inner square has its fair share of marvels as well. The two baroque fountains that are housed here are worth a visit alone, and one can take part in the tossing of spare change to bring about luck and good fortune. 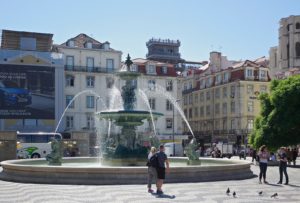 A Quick Guide to Lisbon’s Architecture

It was only in the 19th century that Rossio Square was eventually changed to a cobblestoned surface. The square was originally constructed in the 13th century, so it had a long run of sand and pavement before it was turned into this aesthetic wonder (as were most other public squares across Portugal).

4. The Square is Home to The Dona Maria II National Theater

The entire northern wing of the square is dedicated to the housing of the Dona Maria II National Theater, a monumental building that was constructed in Neoclassical style sometime during the 1840s. The theatre is still in operation to this day and is a wonder to behold if you get the chance!

Which Theaters to Visit in Lisbon

5. Cafe Nicola is Also Part of the Architecture

Cafe Nicola is one of the most famous coffee shops in all of Lisbon, and it calls the Rossio Square home. The beautiful art deco façade is a notable visual in the square, and the shop itself dates back over 200 years.

6. In the Center Stands the Column of Pedro IV

You can’t miss it, and the column is known amongst locals as the “soldier king”. It’s a wonderful sculpture to stand in front of, as the attention to detail can only properly be appreciated from close proximity. At the bottom of the pillar there sit four female figures that are said to represent the King’s various qualities: Justice, Wisdom, Strength and Moderation. 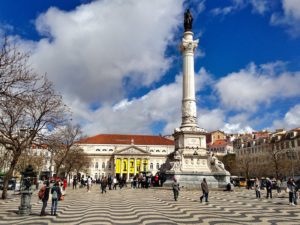 7. The Square is Attached to Rossio Railway Station

The Rossio Station is a spot you’ll become very familiar with if you intend to take any day trips outside of Lisbon. It’s from here that one can catch various trains to places on the coast, such as Cascais.

The station has been in operation since 1887, making it a landmark in terms of Portuguese history.

8. By Night, This Square Comes to Life

Well actually, the action starts from around golden hour, when the sun rays start beaming across the square and drenching everything (and everyone) in gold. This is when people start to gather in their unique groups. 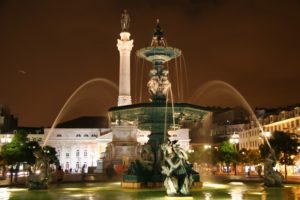 You’ll find everything from youth-group skater types, to romance-seeking couples with their tripods ready. Musicians come to busk, vendors come to hawk, and families roam around fulfilling their bucket list endeavors.

Nightlife in Lisbon: What to do and Where to go