The Portuguese Palaces Near Lisbon 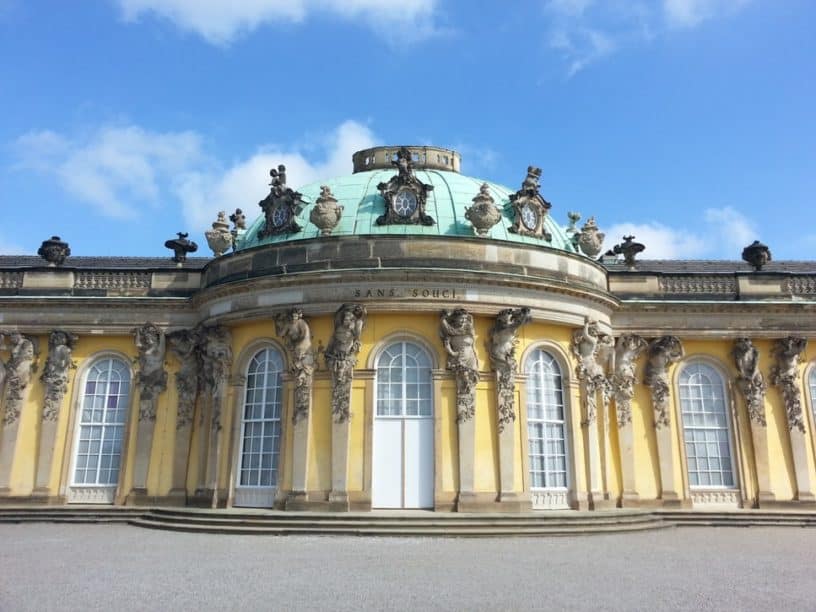 The Portuguese Palaces Near Lisbon

Portugal was once a land of immense royalty; the plethora of remaining castles and palaces around the country are testament to this.

In and around Lisbon there are a number of royal residencies that are today available for public viewing, something that would not have been an option in years prior. The palaces make for wonderful day trips out of Lisbon, and most of them land up being both a cultural/educational experience and a workout. 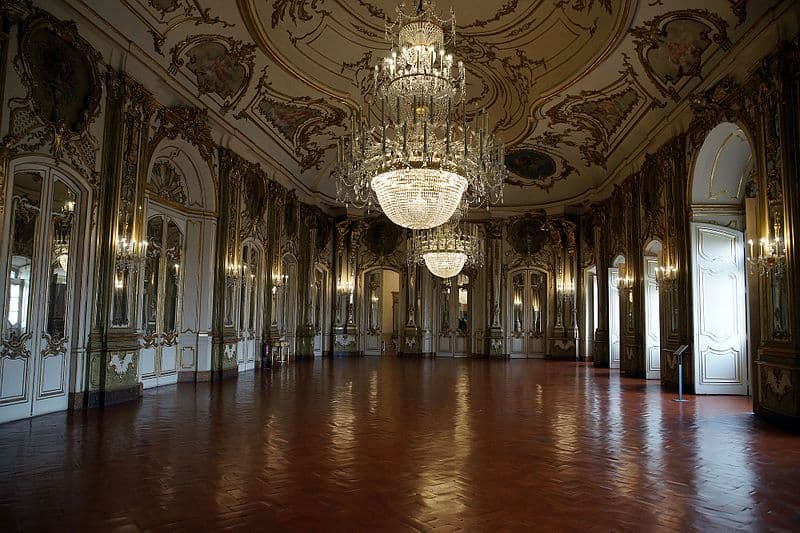 Here are some noteworthy ones that would do well worked into any travel schedule. All of them are suitable for visits with children, just be sure you’re all wearing comfy walking shoes.

Upon first arriving in Lisbon I was itching to get myself to Mafra to see the National Palace. I had seen images of the library embedded within the palace, and this was almost reason enough to buy a flight to Portugal alone.

The library inside of this beautiful palace is one of the most enchanting spaces on the planet; believed so by me and just about everyone to have ever visited it.

Construction of both the palace and library began back in 1717, commissioned by King D. João V who envisioned a grand palace that would have both a church and a convent on site. 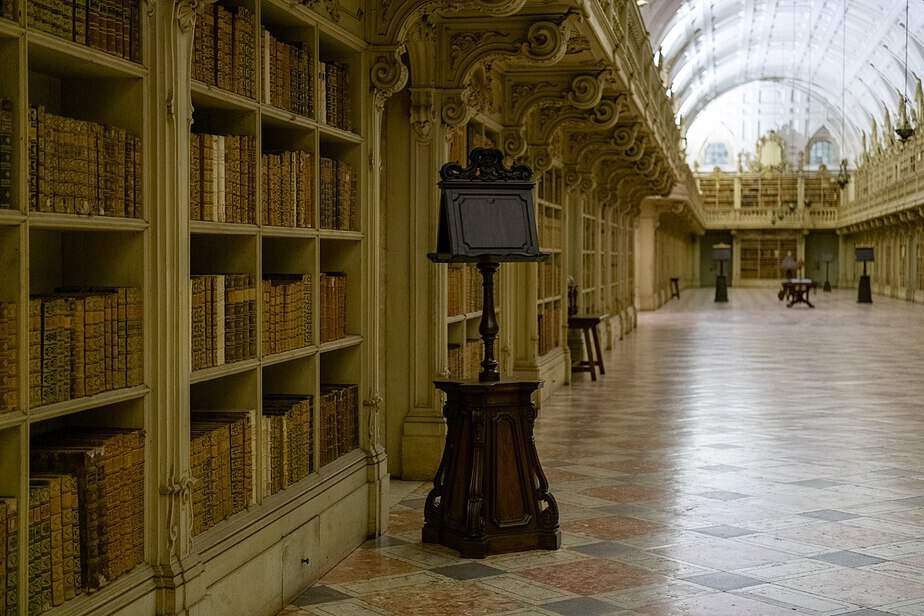 The palace covers a land mass of over 4 square kilometers. There are over 1200 rooms in the building, and none of them are small.

Mafra lies about 45 minutes outside of Lisbon and can be accessed using the trains or busses . If you’ll be visiting in a group of three or more, splitting an Uber fair works out roughly the same as public transport would, and it will be a bit faster! 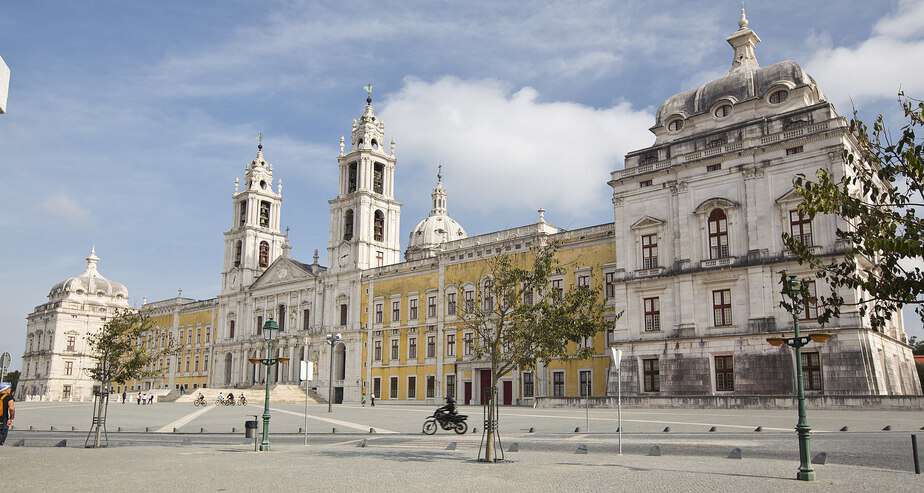 Opening Hours: Wednesday to Monday – 9am to 6pm

National Palace Of Pena near Lisbon

A day trip to Sintra is an absolute must for anyone who is visiting Lisbon for the first time. It’s an old forest village also about 45 minutes outside of the city center, and again, can be accessed using public transport or by splitting a taxi fare.

Sintra holds many beautiful palaces; it was once the summer getaway region for the Portuguese royals. A lot of the palaces have since been transformed into lavish 5 star hotels, something Sintra has become known for in recent years. 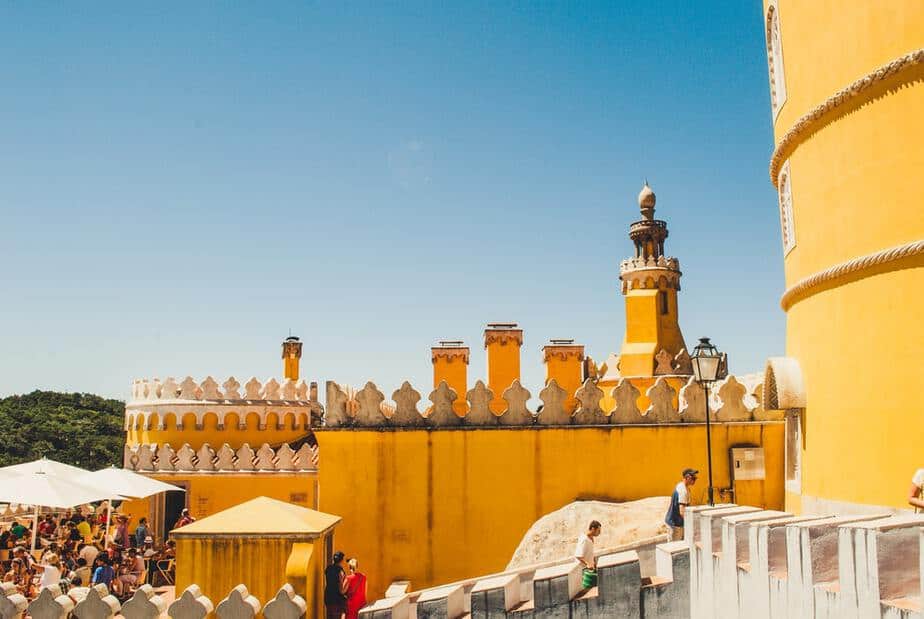 The Pena Palace remains a historic site and sits proudly on top of one of the valley’s hills. It’s the bright orange, animated looking palace you’ve likely seen in photographs if you’ve ever looked up Sintra online.

The palace is one of few remaining examples of Romanesque Revival architecture in the region. It’s a space for escapism; a fairytale castle high up in Sintra’s mountains.

There is a €14 entrance fee to visit the Pena Palace for the day. Be prepared to queue for a while to get inside, especially if you try to arrive in the middle of the day. My recommendation: get here early so you can leave early and spend some time exploring the rest of Sintra’s Old Center.

This palace actually isn’t near Lisbon… it’s inside of it.

Situated in the west of the city, the Ajuda National Palace became the official home of the royal family after the great earthquake destroyed the Ribeira Palace where they were currently housed.

Arranging a guided walking tour through this neighborhood in Lisbon would be a great way to get a feel for life in these parts, before entering the palace itself for a visit. 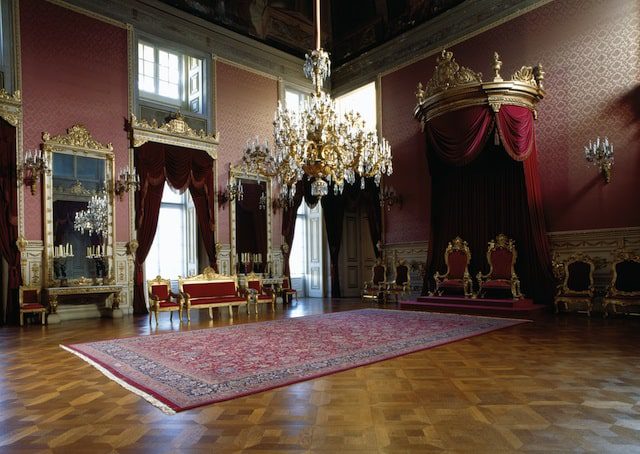 The Ajuda National Palace is arguably the most beautiful structure in all of Lisbon. The isolated nation of the Ajuda neighborhood leaves it largely unnoticed by first time travelers who tend to spend all of their days exploring the coast or center districts like the Alfama or Chiado.

The exterior is Neoclassical, but inside is opulent Baroque at its finest. A whimsical space that is now used as a public museum for art dating back to the 15th century.

You’ll have to pay €5 to get into the Ajuda Palace; alternatively you can visit on Sunday’s between 10am and 2pm when entry is absolutely free.

Opening Hours: Thursday to Tuesday – 10am to 6pm

National Palace Of Queluz near Lisbon

The Portuguese royals loved their summer homes. The National Palace of Queluz was the summer getaway for King Pedro III of Portugal and Queen Maria.

It sits in the town of Queluz, which is halfway between Lisbon and Sintra.  The building was constructed during the 18th century, drawing influence from Baroque, Rococo and Neoclassical designs. The result being one of the most romantic palaces in the country. 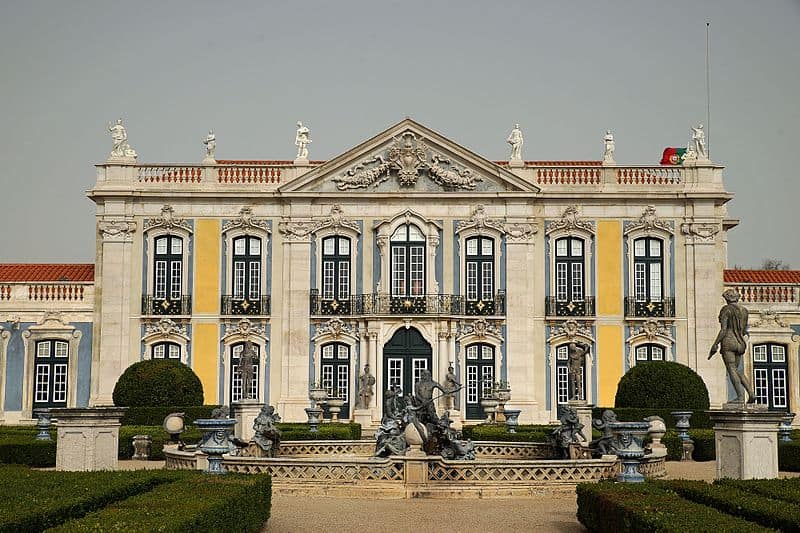 Visitors are permitted to roam the palace interior as well as the gardens. The management teams often put on interesting performances involving actors in period clothing; check their website to find out when to be there for this.

While on the grounds, the throne room is not to be missed. This was worth the visit alone for me; I’ve not seen anything quite like it to this day.

Opening Hours: Monday to Sunday – 9am to 7pm

Castle of Óbidos near Lisbon

The Castle of Óbidos was given as a gift from the king to his wife in 1282. The town of Óbidos itself predates the Romans, and holds rich history in the Portuguese evolutionary timeline. 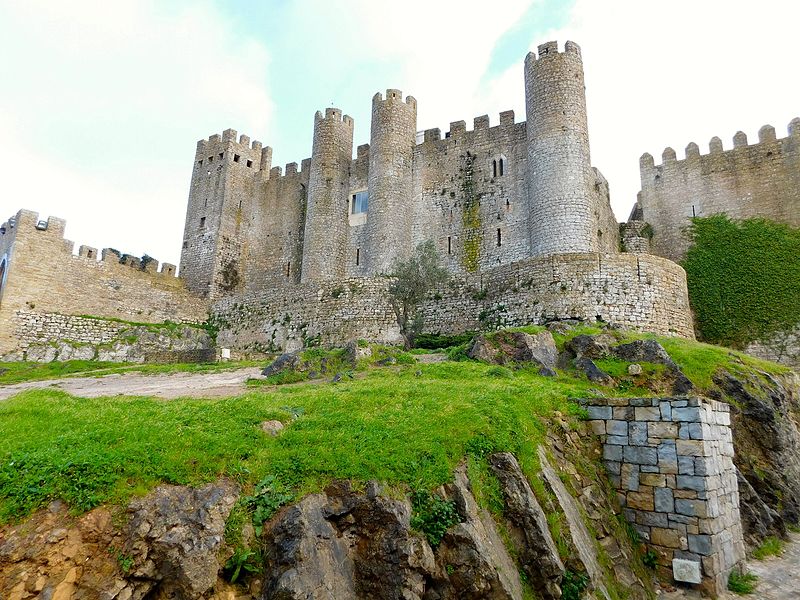 The castle is a gargantuan thing, drawing architectural inspiration from Gothic, Manueline and Baroque styles. Today it is used as a 5 star hotel for visitors looking to take a break from the big city for a few nights.

Day visitors are welcome to come and see the grounds. The Castle of Óbidos is about an hour outside of Lisbon and is best accessed by bus or by taxi.

Opening Hours: Monday to Sunday – 9am to 5pm