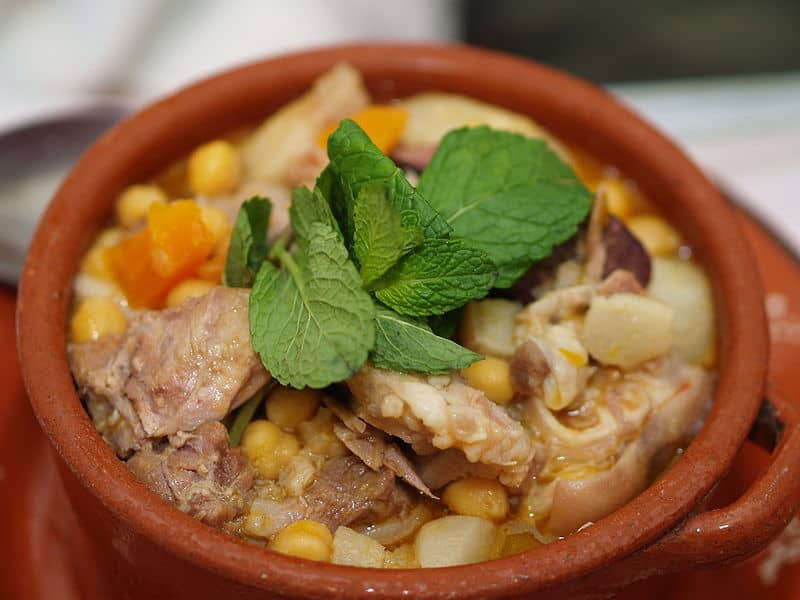 Traditional Portuguese cozido and I have a bit of a love hate relationship. The initial concept of the dish makes my toes squirm in my shoes, and then with further consideration I actually being to feel really pro-cozido as far as being part of a carnivorous society goes.

Allow me to elaborate…

Cozido is an age old Portuguese dish that came about during the 19th centuries. During these times in Europe, servants lived in house with their wealthy employers and were fed most of the leftovers that the house produced.

Cozido is basically a dish made by combining any leftover animal parts and vegetables that were previously going to be disposed of. It usually contains carrots, turnips, beans, cabbage, chickpeas, potatoes, mutton, chicken parts, ribs, ears, trotters, sausages, blood… whatever going, really. 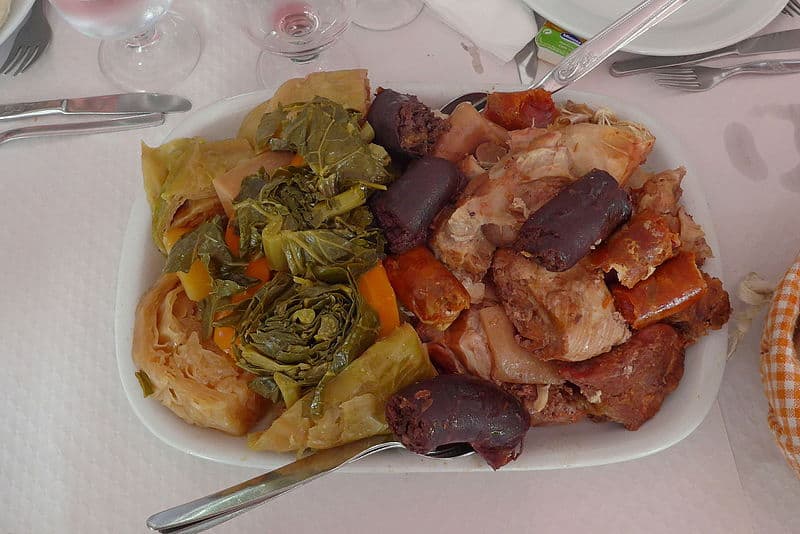 If you hail from outside of Portugal this dish will naturally feel a bit delicate for you. A sort of “anything goes” concoction that the locals will spend hours queueing to eat.

You can understand my initial apprehension toward consuming this kind of “delicacy”; but if you think about it, we should celebrate any dish that makes an effort to use all parts of the animals we kill, instead of offering them up as waste. Cozido is a big part of Portuguese cuisine and definitely something one should try during a visit to the capital.

When you venture to any restaurant in Lisbon to try cozido, one needs to keep in mind that some establishments only offer the dish on specific days of the week. They usually let their pile of unused animal parts and vegetables pile up during the weekdays, for example, and then use it to prepare masses of cozido to serve on the weekend. Call ahead if you are wanting to eat it on a specific day, just incase.

Tasquinha do Lagarto in Lisbon

Tasquinha do Largarto is one of those Portuguese restaurants where there is a queue of locals after 8pm all wanting a spot inside to sit and dine on cozido.

The restaurant is far out of the city center, in a neighborhood known as Azul .

In addition to being packed each evening, weekends are even worse, with lines outside from before 1pm ever Saturday. This is because a lot of Portuguese locals wait until the weekend and consider cozido to be a Saturday or Sunday lunch dish. 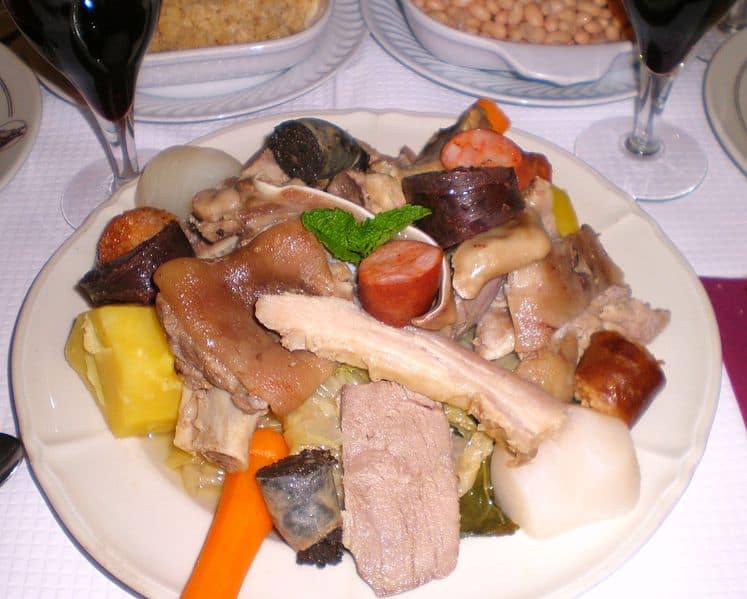 The food at Tasquinha do Lagarto is home cooked goodness at next to nothing prices. Make a booking if standing for 45 minutes sounds unpleasant to you.

Os Courenses is both a Portuguese cultural and cuisine experience. It is in the far north of the city, far away from the gentrified neighborhoods that cater to all the English speaking travelers.

Almost no one in Os Courenses speaks any English, and their menus are full Portuguese as well. Prior to eating here I suggest sitting with a translation app and isolating everything you’re going to want to order on arrival, as well as a few general phrases like “the bill please” or “can we have salt”. 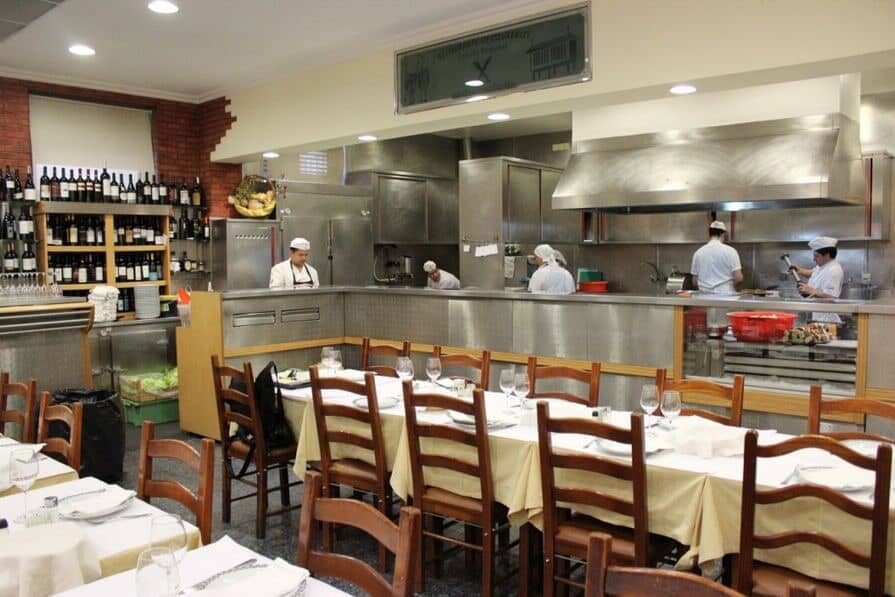 Os Courenses makes fresh, home cooked cozido every day. This is why it is so loved by the Portuguese public. A lot of their diners are regulars, you’ll notice it by the way the staff, owners and diners interact with distinct familiarity.

One of the pricer cozido dishes you’ll have in Lisbon, simply due to the nature of this upmarket restaurant.

Something that a free guided walking tour through Lisbon won’t teach you is that there are tropical islands just a few miles west of Lisbon that are easily accessible from the capital.

The Azores Islands are a cluster of unfathomable land masses floating on the mid-Atlantic. While much of the cuisine is traditionally Portuguese, the island naturally has its own adaptions that make for a different experience of the foods altogether.

Just outside of Lisbon’s center, on the west coast of the Tagus, the town of Belem is home to Espaço Açores; a restaurant that brings Azores cuisine to the mainland. 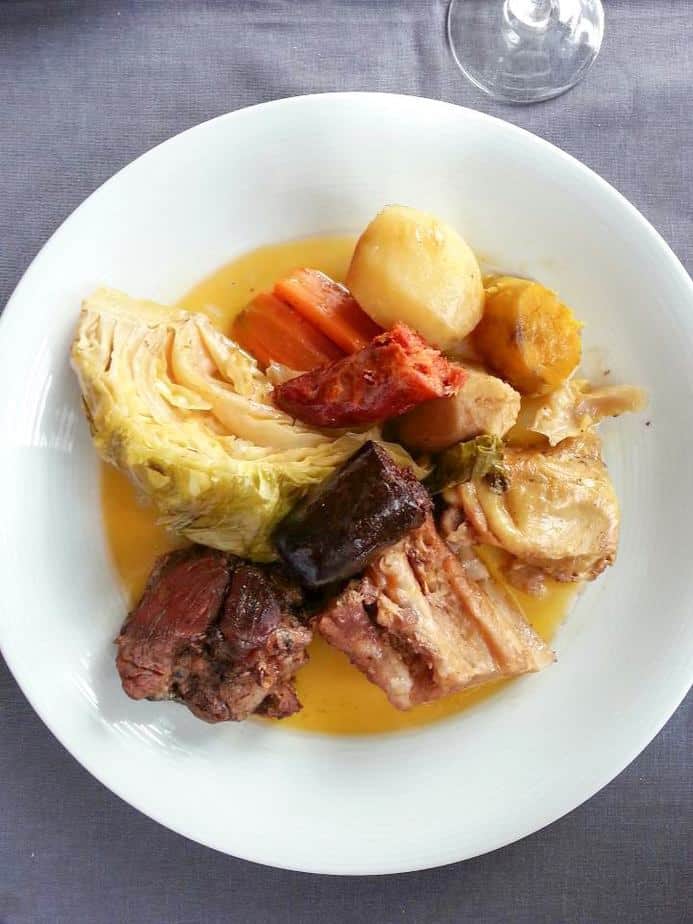 Even on the islands they don’t like to waste ingredients, and cozido is a dish served daily.

Dining at Espaço Açores is a wonderful exposure to the traditional cozido dish as well as the foods one will find on Azores. If you’re headed to the islands from Lisbon this is a great preparation dinner before you go! The owner loves giving travel tips and information about the island to interested patrons.

An age old Portuguese dish is best eaten in the age old village that precedes the cuisine itself!

In the far south of Lisbon’s Alfama, Reviervolta has made itself into a little haven of food, drinking and Portuguese entertainment.

Restaurants in the Alfama generally double as bars, bakeries or fado performance venues in order to bring in additional revenue and keep up with the high cost of rent in this part of the city center. 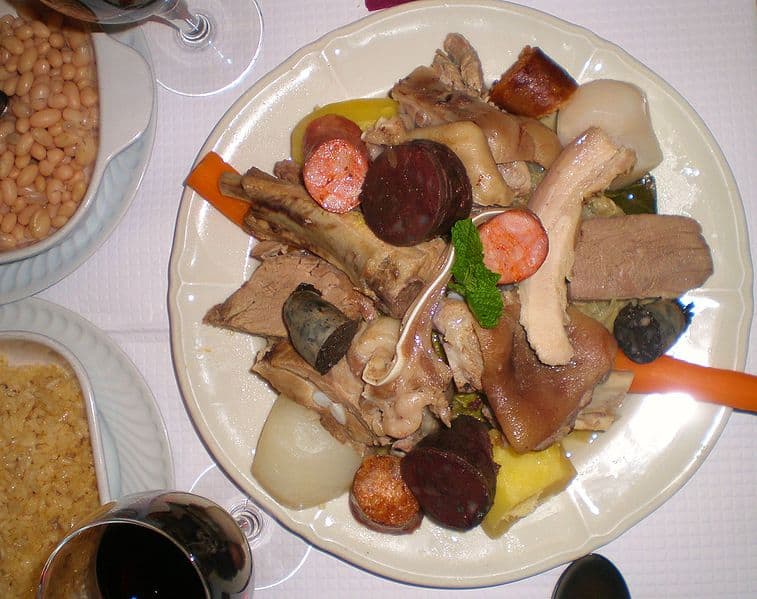 Reviervolta is a one stop shop for all of these hospitable elements and a typical day here starts as early as 10am through until late in the evening.

Cozido is always on the menu, however there have been a few times where I have arrived only to be told that they weren’t able to serve it that day. Calling ahead is always recommended, as is booking a table if you’d like to eat during dinner service; it’s a popular spot in the Alfama district.