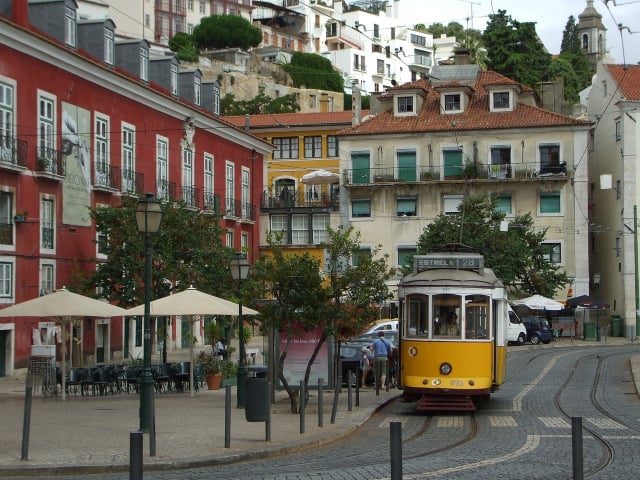 Something I love about traveling throughout Europe is seeing the historical sites in various countries. As an American, Europe just feels so old, and I love wandering through different places that make me feel like I’m walking through a history book.

Lisbon is no exception – there are several different sites worth exploring! Lisbon was established in the 8th century, so you know that there are some really ancient buildings, monuments and churches to visit.

If you’re a history buff like me and are planning a trip to Lisbon, or if you just want to brush up on your Portuguese history…you’ve come to the right place! Keep reading for a comprehensive list of the 10 best historical sites to visit in Lisbon. 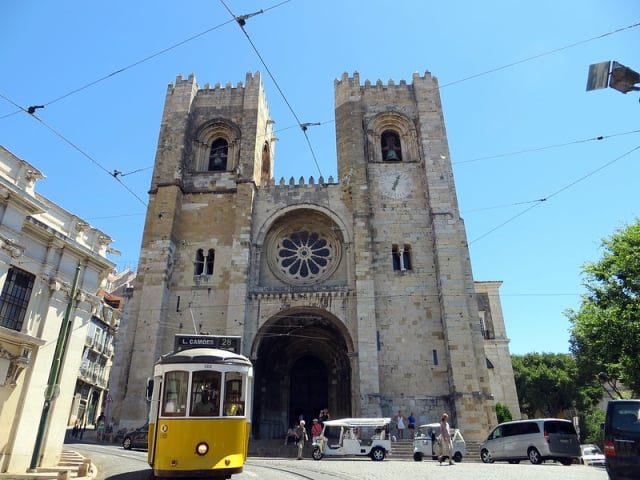 In the 12th century, Lisbon was conquered by an army of North European crusaders during the Second Crusade. An Englishman was named bishop, and construction on the new cathedral began.

The first version of the cathedral was completed in the early 13th century, and was built in the Late Romanesque style. Over the years, new sections were added and other remodelled and restored. At the end of the 13th century in particular, King Dinis of Portugal added on a Gothic cloister. Then, King Afonso IV of Portugal commissioned that the main chapel be converted into a royal pantheon in the Gothic style as well.

Things really changed in 1755 due to a major earthquake that destroyed huge areas in Lisbon. The main chapel, cloister and the pantheon were destroyed, and a long project of reconstruction began. In the beginning of the 20th century, a major remodel was carried out to give the cathedral the appearance it has today. 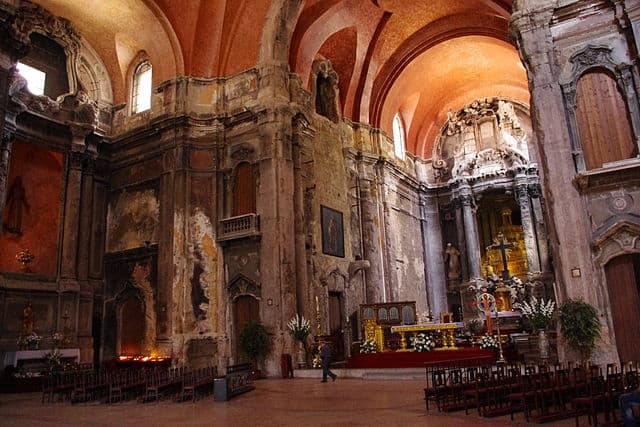 The Igreja de São Domingos is another church to visit in Lisbon! It was constructed in 1241, and was once the largest church in Lisbon. It hosted a slew of Portuguese royal weddings over the years, and is also listed as a National Monument. The church was once home to the Inquisition in Portugal. The Inquisition was a group within the Catholic Church who’s aim was to fight heresy.

Repairs on the church were completed in 1807, but disaster struck in 1959 when a fire ensued. The fire took close to 6 hours to put out, and killed 2 firefighters in the process. Artefacts and paintings inside were destroyed, and the church wasn’t able to reopen until 1994!

The interior of the church is impressive, despite some of the damage left over from the fire. 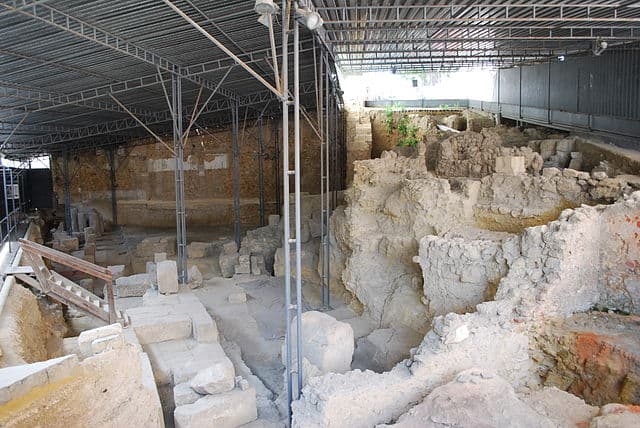 Like most places across Europe, thousands of years ago, the Romans ruled and lived. At the Museu do Teatro Romano in Lisbon, you’ll get to go back in time to discover what a Roman theatre looked like.

The ruins you’ll see here date back to 57 A.D. It was commissioned by Emperor Augustus, and fell out of use in the 4th century AD. After that famous earthquake of 1755 that I’ve been talking about, the theatre was completely buried.

In the 1960s, the theatre was rediscovered and archeologists worked towards unearthing the ruins. There isn’t that much of the theatre that remains, but inside the museum you’ll also be able to take a peek at various artefacts that were discovered in the dig. 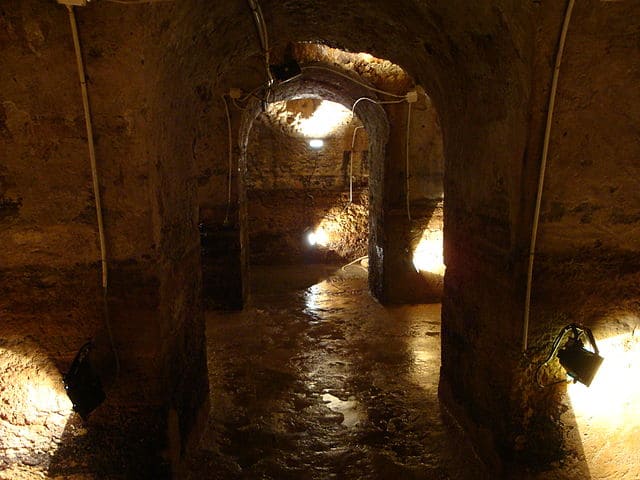 Keeping on the Roman theme, I’d like to introduce the Galerias Romanas. In Roman times, Lisbon was called Olissippo, and the amount of ruins that have been discovered is pretty incredible.

Archeologists are still unsure about what the galleries were used for. There are some that believe the massive chambers were used for storage, while others think that it could be the ruins of thermal springs that supplied the wells of the city.

The reason that the Galerias Romanas are open only one time per year is because the chambers are usually filled with water. The fire department is required to step in in order to drain the galleries so that tourists and locals alike can visit!

Opening hours: The Galerias Romanas opens once a year in March. Visit their website for more details. 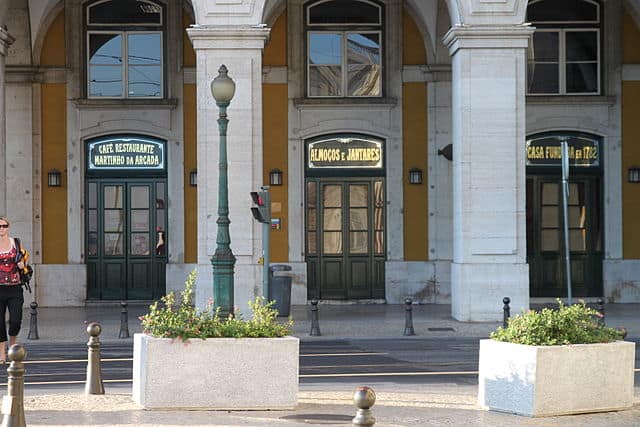 This historical site holds a special place in my heart because I am a huge fan of the Portuguese writer Fernando Pessoa. Pessoa used to frequent the Café Martinho da Arcada, and his usual table has been turned into an homage to the writer.

Additionally, the café is one of the oldest in Lisbon! It was founded in 1782, making it an excellent stop on your historical sites tour. The outdoor terrace is the perfect place to enjoy a hot or cold beverage under the arcades before you go inside to take a look at Pessoa’s table.

I hear that his favorite meal was juliana soup, cod and fried eggs with cheese…in case you want to try it yourselves! 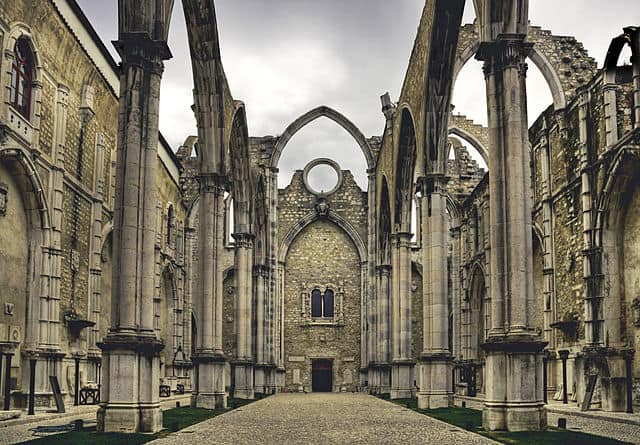 This historical site was built over nearly 35 years between 1389 and 1423. It was originally meant to be a convent and place of worship for the Carmelite order, but the complex is now in ruins.

The earthquake of 1755 strikes again, which is why the convent and church were partially destroyed. The ancient and dark façade sticks out amongst the brightly painted buildings around it, and it is an excellent place to appreciate medieval architecture.

Before the earthquake, the Carmo Convent and Church was the pinnacle of Gothic religious structures in Lisbon. Today, it houses the Carmo Archaeological Museum, which is also a great place to learn more about Lisbon’s history! 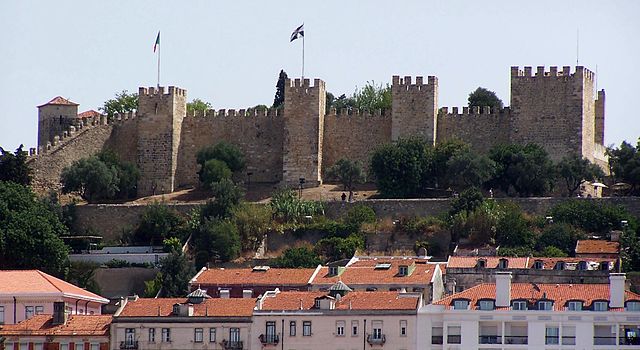 The São Jorge Castle is one of Lisbon’s most famous landmarks. The original structure was built in the 5th century, before it was expanded and improved by the Moors in the 11th century.

Under King Afonso I’s reign, the castle was modified, and in the 13th century it was turned into a royal palace. The royal family and the Bishop of Lisbon both lived there, and it was outfitted with the most luxurious amenities.

In the 1940s, a major restoration project went under way, which including rebuilding many sections of the castle, making it accessible for tourists and the addition of several gardens! 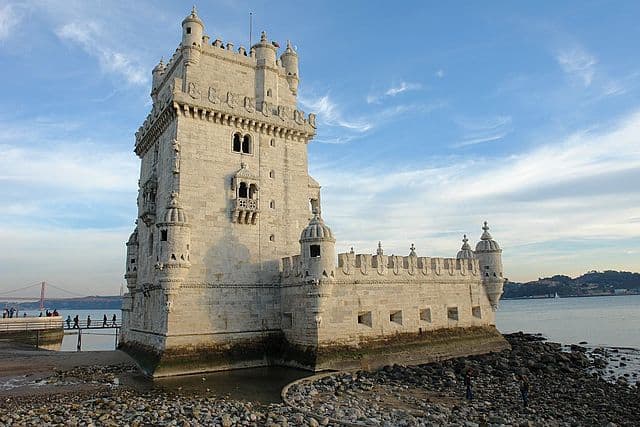 The Tower of Belém is another Lisbon landmark which is synonymous the city. It was named a UNESCO World Heritage Site in 1983, and is on the top of every Lisbon tourists’ to-do lists.

The tower is about 30 metres high and was built in the 16th century, between 1515-1521. The architectural style is called “Manuelino,” after King Manuel I.

Interestingly, in the 16th century a fight between an elephant and a rhinoceros took place on a beach near the Tower of Belém. The Portuguese had recently been on a voyage to Africa, where the picked up the poor animals. In the end, when the elephant saw the rhino, it fled. I’m just happy that no animals lost their lives that day! 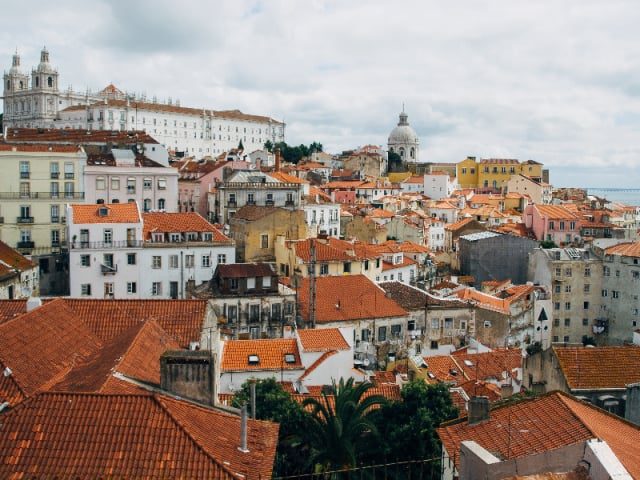 The Alfama district as a whole is a great place to get your dose of history in Lisbon. It is the oldest quarter in the city, and it shows (in a good way)! The streets are narrow and winding, their are beautiful balconies bursting with colorful flowers everywhere.

Alfama is like a village within Lisbon. It is one of the rare places in the city that survived the earthquake in 1755, and there is plenty of history to be found. You’ll find tiny churches, traditional Portuguese azulejo tiles and Fado houses – places where you can listen to traditional Fado music.

Take some time out of your trip to Lisbon and wander through this neighborhood! 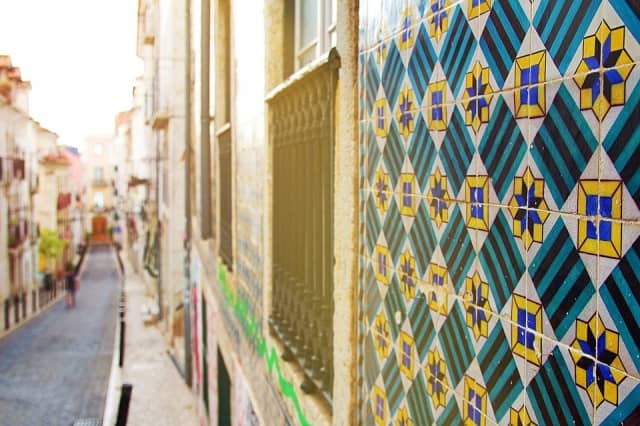 The Bairro Alto district is another historical area in Lisbon. It can be described as bohemian, and there is definitely a hipster vibe to the area.

That being said, there are century old homes in this district, and this is really the place for you if you enjoy Fado music. The quarter dates back to the 16th century, and was (and still is!) the home to many writers and artists.

Another interesting aspect of Bairro Alto is that during the day, it is a fairly quiet area perfect for a stroll, but at night it really comes to life with clubs, bars and restaurants. So, if you’re into history but have a bit of a wild side too, Bairro Alto should definitely be on your to-see lists.

There you have it my fellow history buffs, a list of the 10 best historical sites to visit in Lisbon! Save this article when you’re planning your next trip and I guarantee you’ll enjoy yourselves, and learn a little something too!

If you want to discover even more about Lisbon history, why not join one of our walking tours? You’ll learn even more from our local guides’ expertise. Click here to learn more and make your booking!