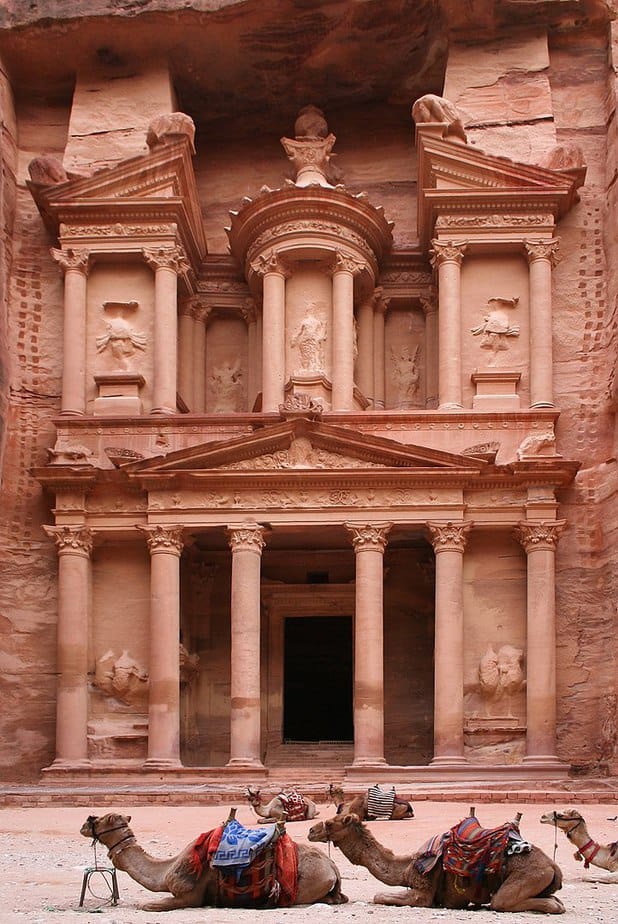 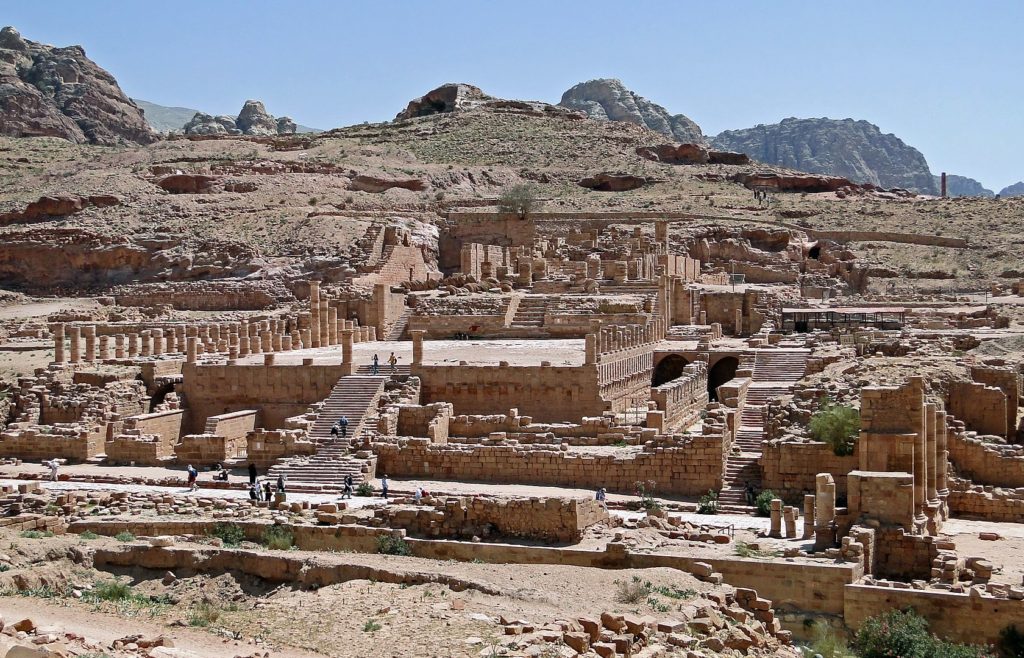 Petra has been named as one of the New 7 Wonders of the World. It is one of the most visited tourist attractions in Jordan. It is also referred to as the Rose City because of the colour of the stone.

Others call it the Lost City reason being it was hidden from the Western world until 1812. Petra is quite surreal and has one of the most precious cultural properties on man’s heritage.

This lost city served as the capital of the Nabatean Kingdom in 300 BC. There are several tombs and temples carved out of the pink rocks.

As an archaeological site, Petra has beautiful rock-hewn architecture and an advanced water management system. This is quite impressive considering the area is in the desert.

It was named a UNESCO World Heritage Site in 1985. Check out these 10 facts about Petra.

1. Petra was home to ancient Arabs in the 2nd Century

The land around Petra has been home to humans from as early as 7000 BC. Archaeologists found evidence proving that the first settlers were the Nabataeans. Petra was the capital of their kingdom until the 4th century BC.

This group of people were nomadic Arabs who capitalised on Petra’s proximity to trade routes. They established a major regional trading centre.

The trading route brought significant profit to the Nabateans and the city became the source of their wealth. This Arab tribe lived in deserts and mountainous areas.

Their location was strategic as they were able to hide from their enemies. The Nabateans were very skilled in water harvesting, agriculture and stone carving.

One of the most famous structures in Petra is Al Khazneh. It is a stone building that accommodated more than 20,000 people. 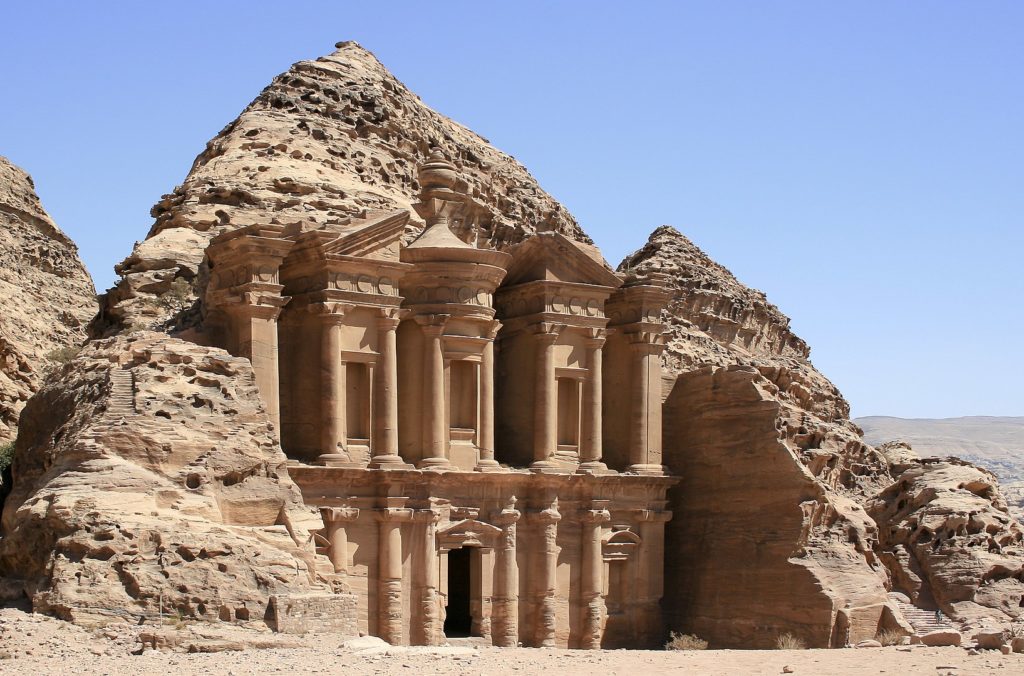 For the longest time, the Nabataean kingdom was an affiliate state of the Roman Empire during the 1st century BC. In 106 AD, the kingdom lost its independence to the Roman Empire.

The Romans took over Nabataea and renamed it Arabia Petraea. This led to a decrease in trade in the city as new trade routes were introduced via the sea.

An earthquake destroyed the city in the year 363. Several structures were destroyed. During the Byzantine era that followed, several Christian churches were built.

Unfortunately, this did not improve the status of Petra. It was later abandoned and was occupied by nomads.

Petra was rediscovered in 1812 by Johan Ludwig Burckhardt.

3. Petra was a booming trading centre

The city of Petra started as a trading post for the Nabateans. They were an Arab Bedouin tribe native to the region now known as south-western Jordan.

This Arab tribe was successful in trade such that their Greek neighbours became jealous of them. They attacked the city in 312 BC and it was the first time the city was recorded in history.

The Nabateans succeeded in fighting the Greek invaders since they were familiar with the mountainous terrain surrounding the city. The mountains acted as their rampart.

4. Petra is one of the New 7 Wonders of the World 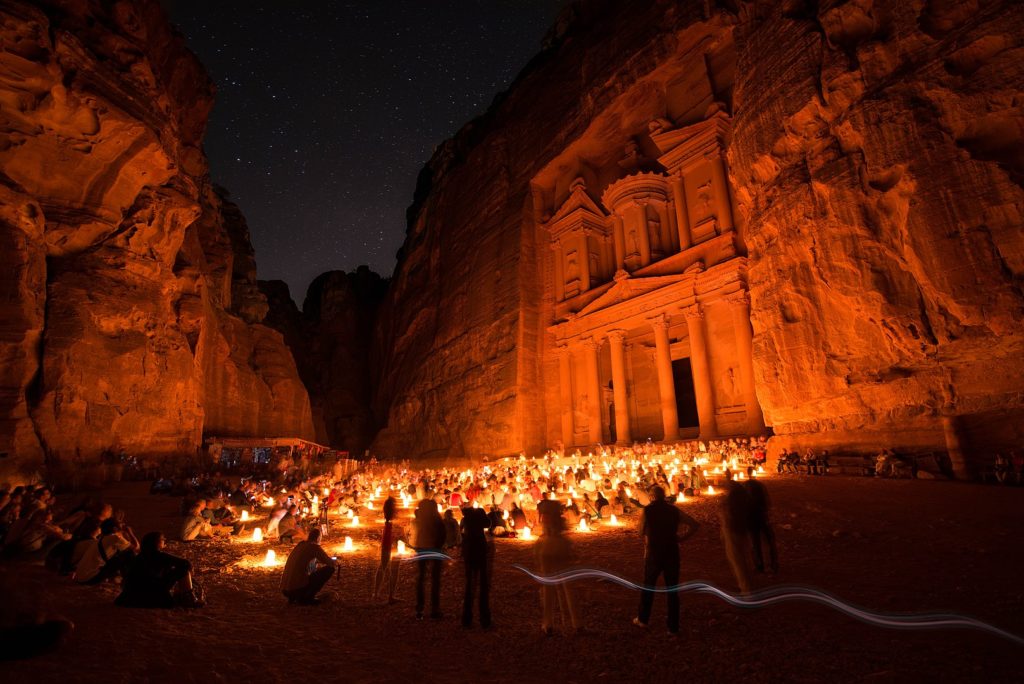 This ancient city of Petra is half man-made and half rock-hewn. The backdrop of the pink rocks makes Petra a beautiful sight.

Its natural beauty got it a place in the New 7 Wonders of the World and also a UNESCO Heritage Site. UNESCO described it as a place that offers an outstanding universal value.

This was because the city dwellers were very creative and innovative as seen in the architecture and plumbing. Despite being in the middle of the desert, the Nabateans had a sufficient supply of water and food.

Its name literally means rocks in Greek because the city was carved from rocks. It was named by Greek visitors due to its distinctive rock carvings.

The Nabateans were expert rock architects and managed to curve an entire city from rocks. Their culture evolved with improved water systems and farming.

After the Romans attacked and conquered the city, they also attempted to introduce their own architectural styles. The result was a mix of different cultures. 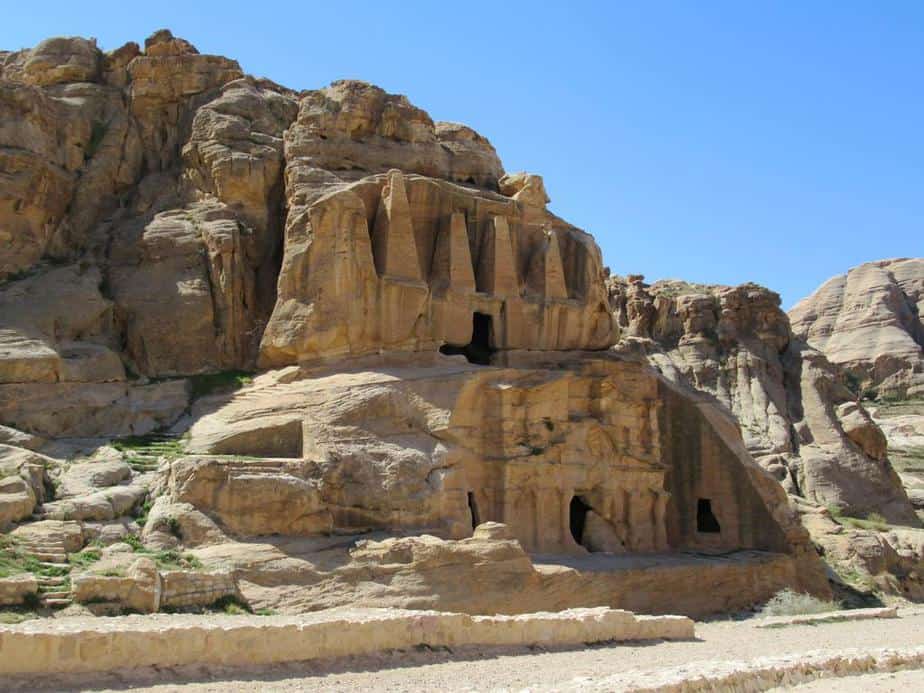 The carved tombs in Petra are well detained and beautiful. One of them is the iconic Urn Tomb. This tomb was carved into the façade of the mountain overlooking the rest of the city.

These tombs are said to be the resting place of the noble from the Nabatean tribe. The tombs were carved between the 1st and 2nd centuries.

They also represented the wealth and status of the Nabatean elite. The tombs are huge and richly decorated. Later after they left, Christians built churches alongside the tombs.

7. Petra is considered to be the lost city

At the beginning of the 8th century A.D., Petra was mostly abandoned and had lost its significance. Its unique architecture continues to make it stand out and this caught the eye of archaeologists and historians.

The ruins of this city were discovered in 1812 by Swiss explorer Johann Ludwig Burckhardt. He made it a popular attraction to the western world. 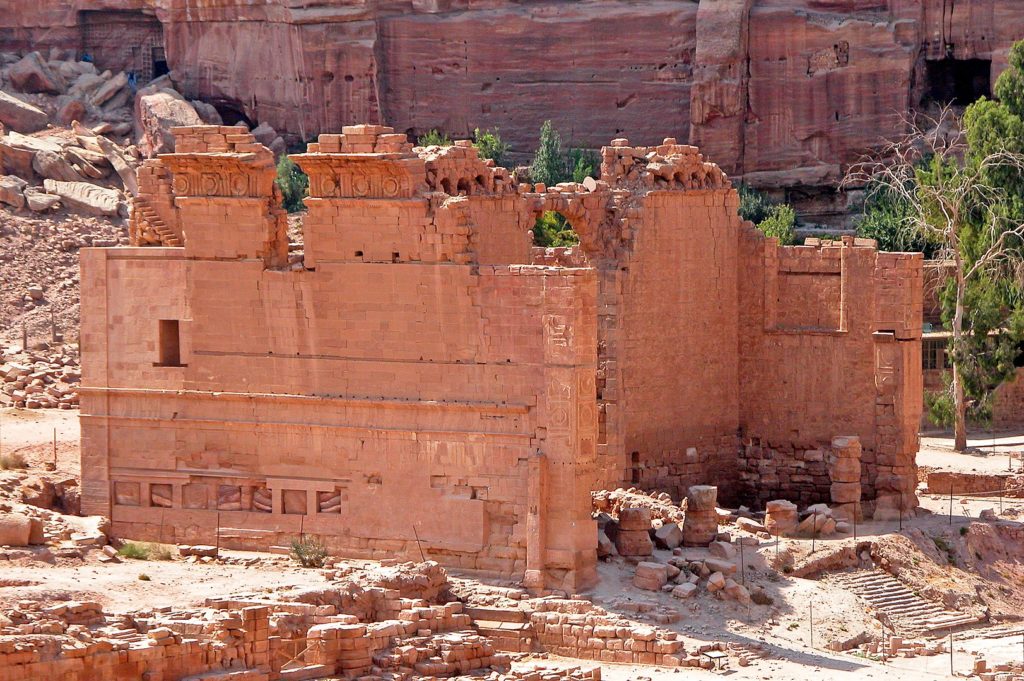 As desert dwellers, the Nabateans had to figure out a method that would help them preserve water. They built dams and other water reservoirs that stored rainwater all year round.

These water reservoirs came in handy when they experienced flooding. With enough water, they were able to practice agriculture.

To date, people are living in the caves. Some of them were relocated to a new location by the Jordanian government.

9. The face of Petra was not a treasury

The Treasury also known as Al-Khazneh, is the most famous rock structure of Petra. This was the face of the ancient city because of how elaborate it is. The structure is so popular and most people believed that it was Petra itself.

Furthermore, the structure is not a treasury but a mausoleum of the Nabatean King Aretas IV. It is the most photographed site in Petra.

10. The City of Petra was destroyed by an Earthquake and flash floods 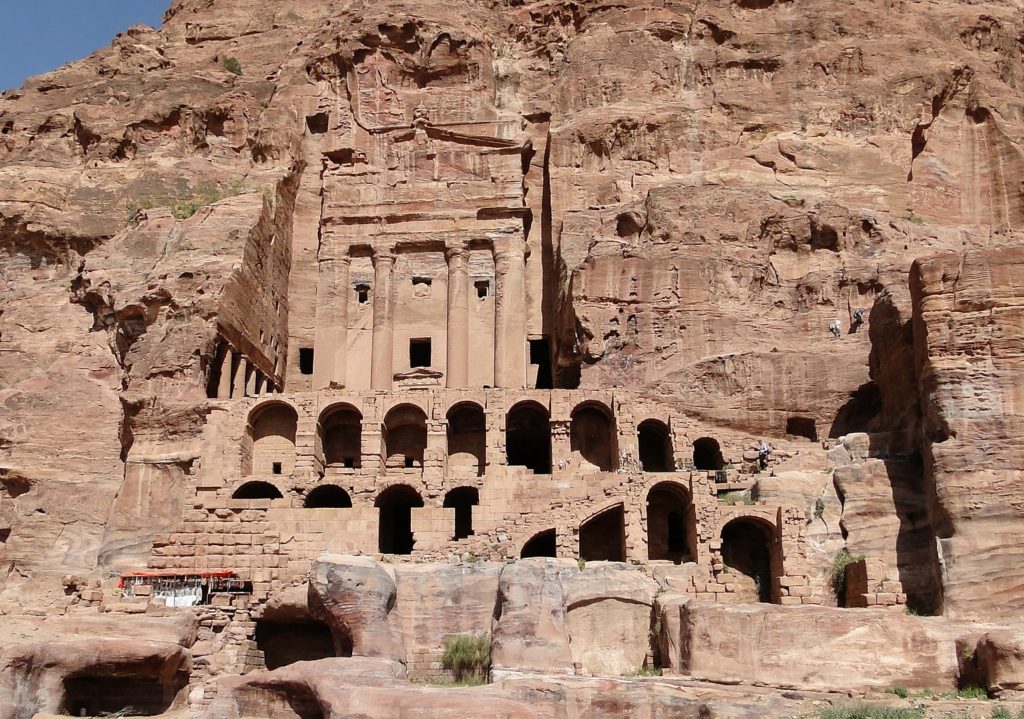 Most of the buildings in Petra were destroyed by an earthquake in A.D. 363. This led to the decline of the popularity and prosperity of the city.

Another disaster that destroyed the city was flood water. Several flash floods saw the destruction of several structures and loss of life.

In 1960, the Jordanian government restored the neglected dams that were built by the Nabateans.