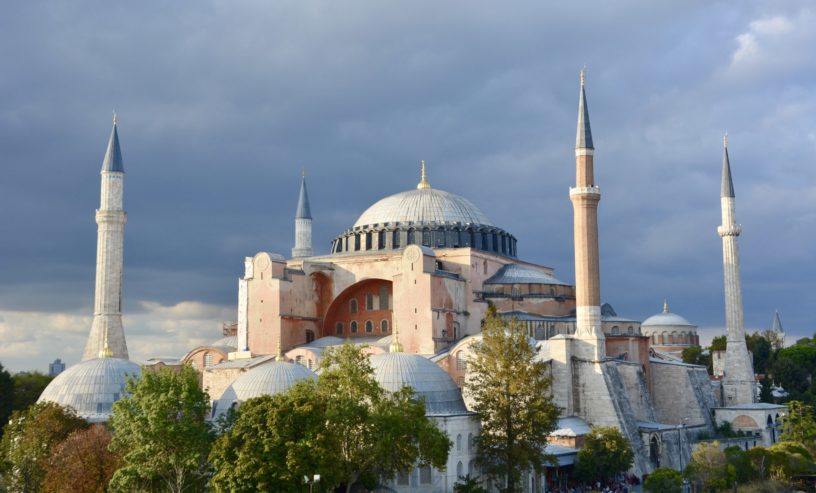 Hagia Sophia is one of the world’s greatest monuments and was also once one of the largest Cathedrals in the world. It is more than 1500 years old, yet it was built within a short period of six years. This has rather popularized its architects.

Interestingly, Hagia Sophia was a church then mosque turned museum. How is that for diversity. The top 10 facts about Hagia Sophia draw a vivid picture of the great piece of architecture and history of this Istanbul beauty. 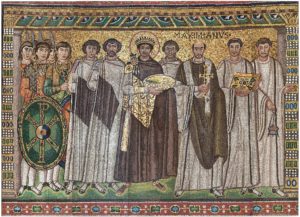 Emperor Justinian and members of his court- Wikimedia Commons

Hagia Sophia is undoubtedly the most important Byzantine (Istanbul) empire buildings, and also one of the world’s greatest monuments. Emperor Justinian ruled for 38 years, during which a revolt took place, and the church building was destroyed. The emperor however ordered and oversaw Hagia Sophia’s construction and inaugurated it in 537 CE. He was very proud of this work.

2. One of Hagia Sophia’s features is a great dome 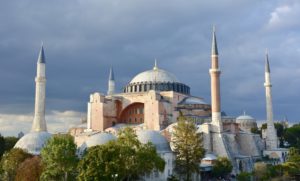 Hagia Sophia’s walls once had to be reconstructed to support a huge dome that sits atop it, as its weight caused the walls to lean outward. Its sheer size which is 31.7 meters in diameter and 55.6 meters high from floor level is breathtaking. The pendentives that sit between the arches that support the dome were also a unique feature used in construction then.

Getting a circular dome to stay on top of a square building by itself is impressive, hence the fascination with the Hagia Sophia.

It is said that the huge dome is a symbol of the realm of heaven and its glory. This dome is worth the mention as it is the most striking element of Hagia Sophia, and the second biggest in the world- pantheon in Rome boasts a slightly bigger dome

3. Hagia Sophia’s design has been used as an architectural yardstick

The Basilica style and the huge 32-meter dome of the Hagia Sophia structure make it outstanding. Its structure is almost square with three aisles separated by columns with galleries above it. Marble piers support a heavy dome that sits on its top.

Hagia Sophia has windows that obscure the supports when the sun shines making the canopy appear to be floating.

These and many other architectural marvels have made Hagia Sophia more than ordinary-its design inspired that of other mosques like the Blue Mosque of Istanbul and the Sultan Ahmed Mosque. 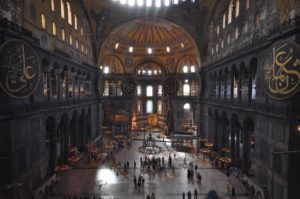 Hagia Sophia was built as a Cathedral and its name means holy wisdom. It was built under an officially Christian state at a time when citizens were dissatisfied with their government and were rioting.

Justinian, the ruler then, managed to quell the riots and had the Hagia Sophia built with simple decorations that were mostly images of the cross, and later ornate mosaics.

5. Hagia Sophia lost a lot of art to iconoclasm 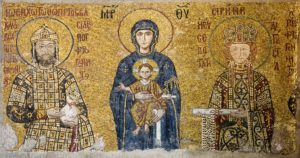 The Hagia Sophia museum is rich in artworks of both Muslim and Christian varieties. One can only imagine how much more of Christian artwork there would have been if iconoclasm had not taken place- this is the belief in the importance of the destruction of images and monuments for fear of these becoming the center of reverence rather than God.

During the iconoclasm period, many artworks or images were plastered over, destroyed, or altogether removed. People would actually come to pray and mak wishes in front of Hagia Sophia’s icons with the belief that they would come true.

6. Hagia Sophia’s ‘ Weeping Column’ is said to have healing powers

Hagia Sophia has a column known as the wishing column, perspiring column, or sweating column that is damp to the touch. It is located on the northwest portion of the church, and on it there is a hole in which people jam their fingers to receive healing from their ailments! It is believed that it has the blessing of St. Gregory who appeared near it, thus provides healing.

A finger that emerges wet from the hole is believed to be an indication of the fulfillment of one’s wishes and the provision of healing. Protective bronze plates put over the hole was no determent to pilgrims who still found a way to access the hole.

7. Modernization of Hagia Sophia caused its conversion into a museum 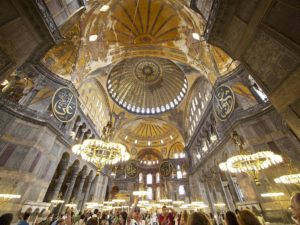 The first President of Turkey Mustafa Kemal Atatürk came into power in 1923. He banned numerous Islamic customs and westernized Turkey. This was precedence for the secularization of the Hagia Sophia, later converted to a museum.

Before its conversion, Hagia Sophia was Istanbul’s main mosque. Its conversion was seen as beneficial to the Eastern countries and the world as it would provide new knowledge.

Turkey’s Kariye mosque turned museum was contested in court. The ruling made was in its favor, as the conversion was declared unlawful. This may have set precedence for other museums that were once mosques such as Hagia Sophia to revert to being mosques.

8. Hagia Sophia sits on the site of two other churches

Hagia Sophia is the third construction at the spot on which it sits. The other two constructions were churches as well. The first one, Μεγάλη Ἐκκλησία, Megálē Ekklēsíā, meaning “Great Church” was burned in 404.

Theodosius II ordered the erection of a new church which was built but was also razed to the ground during a revolt against Emperor Justinian I. This emperor commissioned architects Isidore of Miletus and Anthemius of Tralles to build the Hagia Sophia in the wake of the revolt. 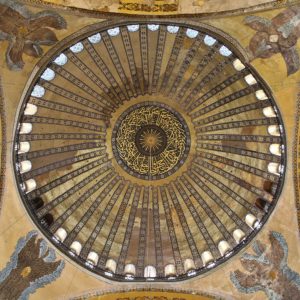 Apart from the Hagia Sophia itself, and its dome, one other outstanding feature of Hagia Sophia is its forty windows beneath the large dome all around the building. When the sun shines, it casts a light into the cathedral that creates a mystical aura reflecting into the nave.

The famous windows, while letting light into the building also would show structural problems or wear and tear, while easing the pressure of the dome on the pendentives. 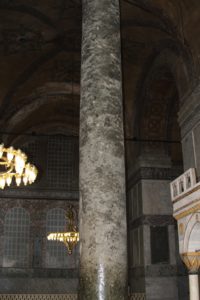 Hagia Sophia’s columns were from the Temple of Artemis at Ephesus which is one of the Seven Wonders of the Ancient World. Large stones were acquired from Egypt while black stone was acquired from the Bosphorus. Additionally, green marble and yellow stone were acquired from Thesally and Syria respectively. All these materials from around the Byzantine Empire and beyond made Hagia Sophia as magnificent as it is.

The features of the Hagia Sophia as described are splendid, and a visit there would help appreciate their individuality as well as their coming together to form the whole. Conversion of the church to mosque, then museum ensures that everything is available for viewing.

It is feared that an earthquake might bring Hagia Sophia down as it was constructed over a fault line. The Museum could also do with some refurbishment as it has been said that Hagia Sophia is in such a state of disrepair it desperately needs work.