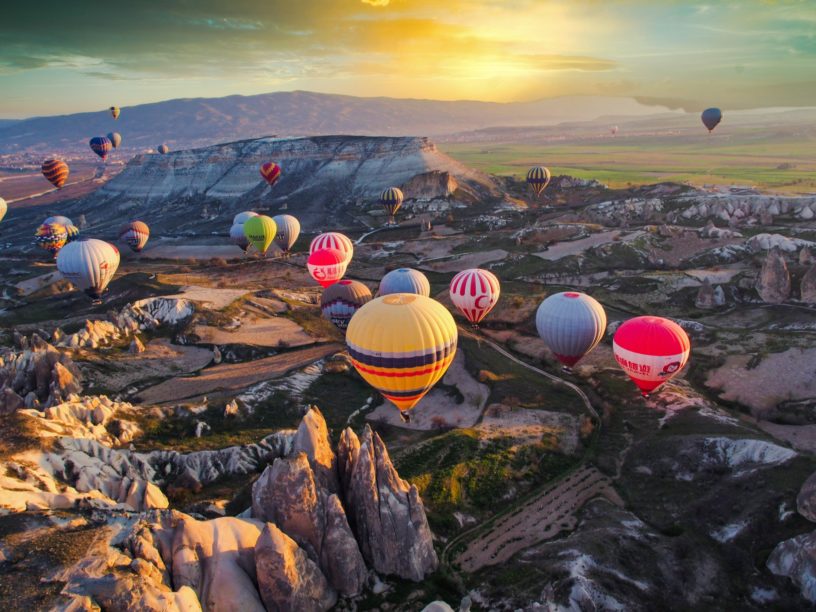 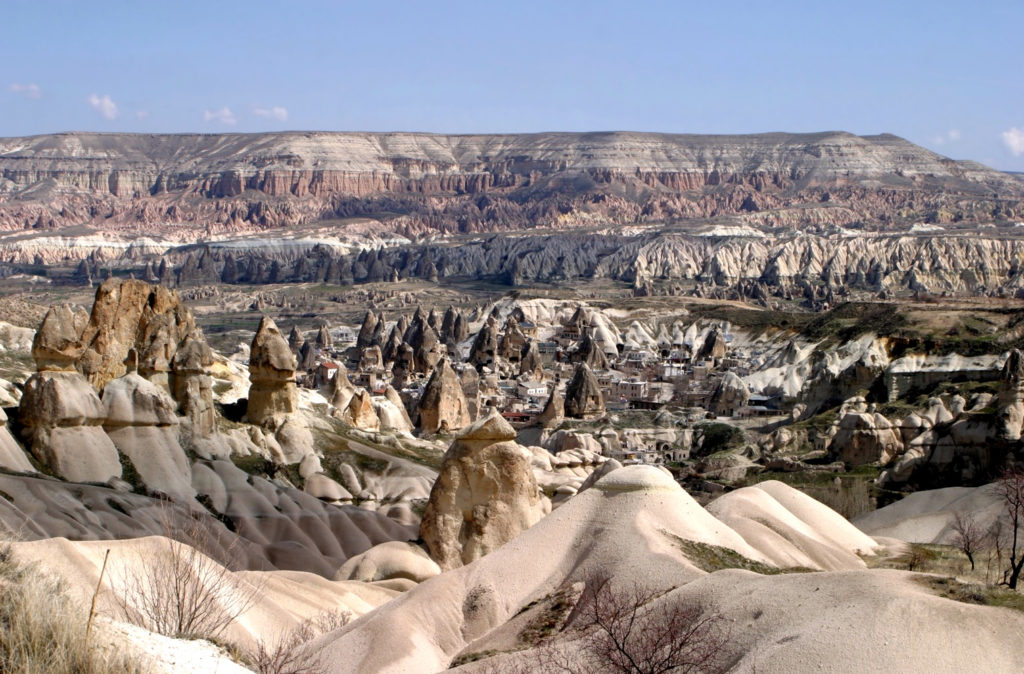 Cappadocia was once an ancient district in east-central Anatolia. It is located along the rocky plateau in the centre of present-day Turkey.

The landscape of the place has dramatic stretches of soft volcanic rocks. The shapes of these rocks were a result of constant wind erosion. This has resulted in towers, cones, valleys and caves.

Some churches were carved from the rocks, underground cities and tunnels. These structures date back to the Byzantine and Islamic eras.

It was formerly occupied by the Hittite Empire that saw the rise of Christian philosophers.

Cappadocia has served as a backdrop for fascinating rich history. It remains to be a popular attraction in Turkey. A popular activity here is taking a hot air balloon.

Here are ten interesting facts you might want to know about the Cappadocia.

1. The name Cappadocia dates back to the 6th century 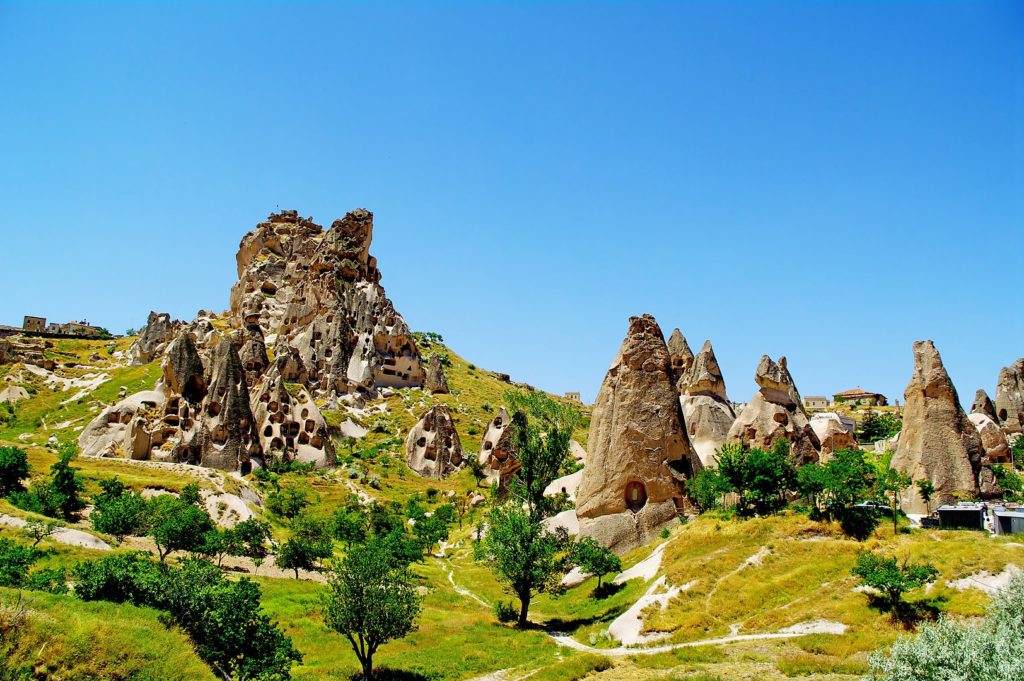 This name has been used since the late 6th century BC. The first record of this name was by kings, Darius I and Xerxes. It was one of the countries that made up the Persian empire.

The locals called it Katpatuka, a name from the Luwian language meaning low country. It was also known as the land of good horses by Iranians.

Persian and Assyrian Kings would receive gifts and tributes of horses. The horses were part of the taxes paid to the Persian government.

Horses are still valued by the locals to date. It is also used as a mode of transport by visitors.

2. Cappadocia is famously known for its rock formation

About 60 million years ago, a series of volcanic eruptions disrupted the landscape of central Anatolia.

The result of the volcanic eruption led to magical rock formations. They are known as Cappadocia fairies or Cotton Castles. Constant wind and water erosion polished the soft rocks.

These rocks were formed after thick ash solidified into tuffs. They turned into fairylike chimneys that stand at about 130 feet high.

The shapes of these rocks may change in the next century since wind and water slowly erodes them.

3. There are cities underground Cappadocia 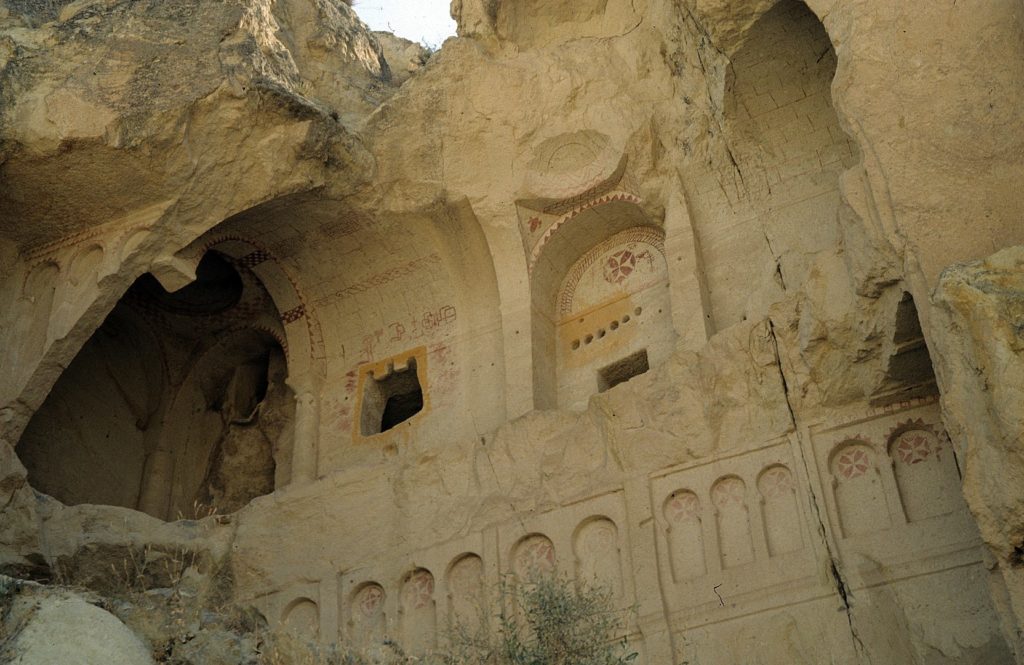 Below the surface of the fairy chimneys is an entire underground city. The city is connected by a network of tunnels and was used as a settlement.

Christians used the underground city as a refuge from Romans. There are about 200 churches underground that are of great historical significance.

The builders were able to carve out tunnels because the rocks are malleable. Many of the cities are open to visitors.

There are also several man-made caves in Cappadocia that were dug during the period of instability. They served as hideouts.

Some of the buildings underground are up to 8 levels deep into the earth. They had all amenities needed for day to day living.

4. There are several churches and monasteries in Cappadocia

Between the 10th and 11th centuries, Cappadocia enjoyed a period of opulence that increased the construction of rock-hewn churches and monasteries.

Most of the churches were decorated with expensive ornaments. There are about 600 churches and it is believed that there are more yet to be discovered.

Walking through the church, one can admire the beautiful frescoes that have retained their colours.

Some of the frescoes have been damaged due to superstition and erosion. superstitious locals scratched out the eyes of some of the figures due to fear of the Evil Eye.

5. Cappadocia has an open-air museum 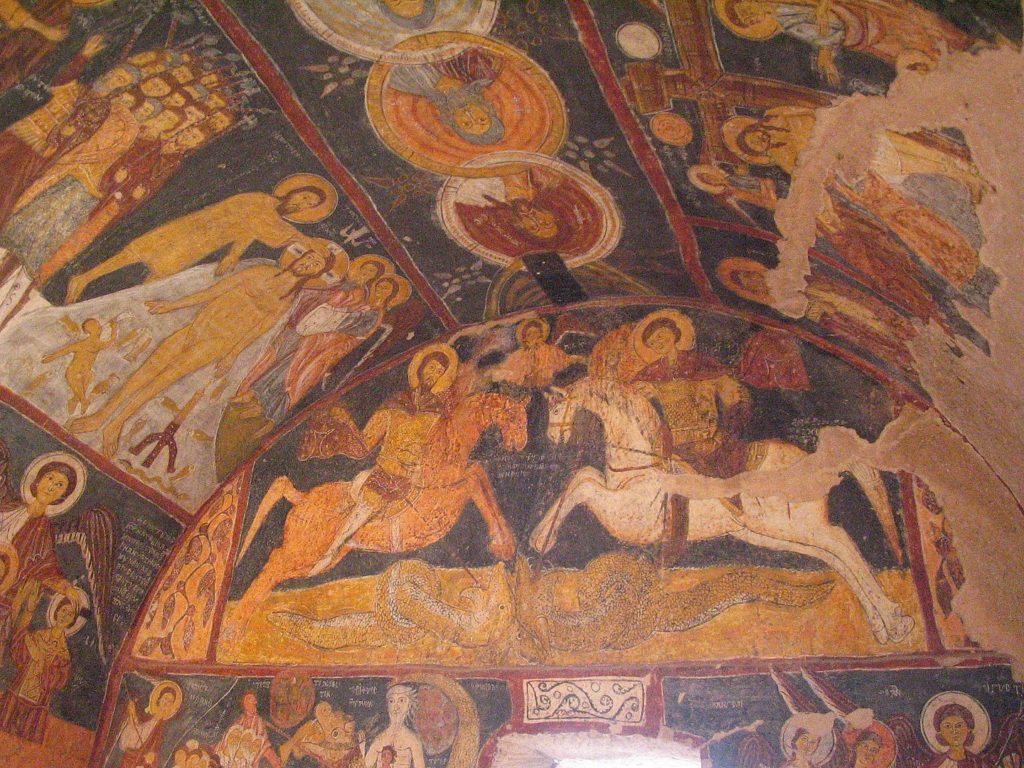 The Göreme Open-Air Museum has some of the best known religious complexes in the area.

It was listed in the UNESCO World Heritage Site in 1985 and was the first in Turkey. This was together with the other rock sites of Cappadocia.

This open air-museum looks like a monastery with its own church side by side. Tourists visiting Cappadocia make this museum their first stop.

The church buildings present unique examples of rock-hewn architecture and frescoes. These churches date back to the 10th, 11th and 12th centuries.

6. Human occupation in Cappadocia dates back to the 3rd century

Cappadocia has been inhabited by human settlers since the Palaeolithic Era. It was home to the Hatti tribe between 2500 and 2000 BCE.

The Hittites occupied the region around 2000 BCE. Assyrians also lived here at the same time. They made Cappadocia their trading post.

During medieval times, Cappadocia was a refuge for people escaping religious persecutions. Most of the monks lived here for thousands of years.

Archaeologists found Neolithic pottery and tools that show the existence of human occupancy in the region.

7. The best view of Cappadocia is in a hot air balloon 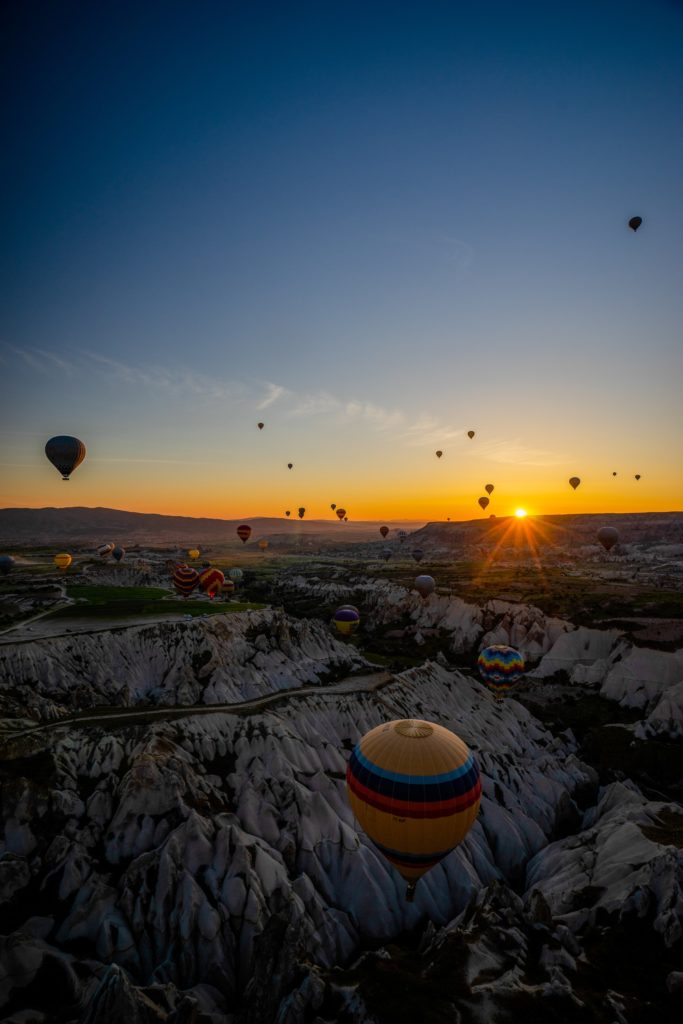 Photo by Tony Lee on Unsplash

Hot-air ballooning is very popular in Cappadocia. You can get to ride in one of these balloons in Göreme.

Taking a hot air balloon gives the land the credit it deserves for beauty. Float in the air across the Cappadocia skyline, and take in the unforgettable views.

More than 100 hot air balloons take to the skies every morning.

8. An ancient village in Cappadocia is still inhabited 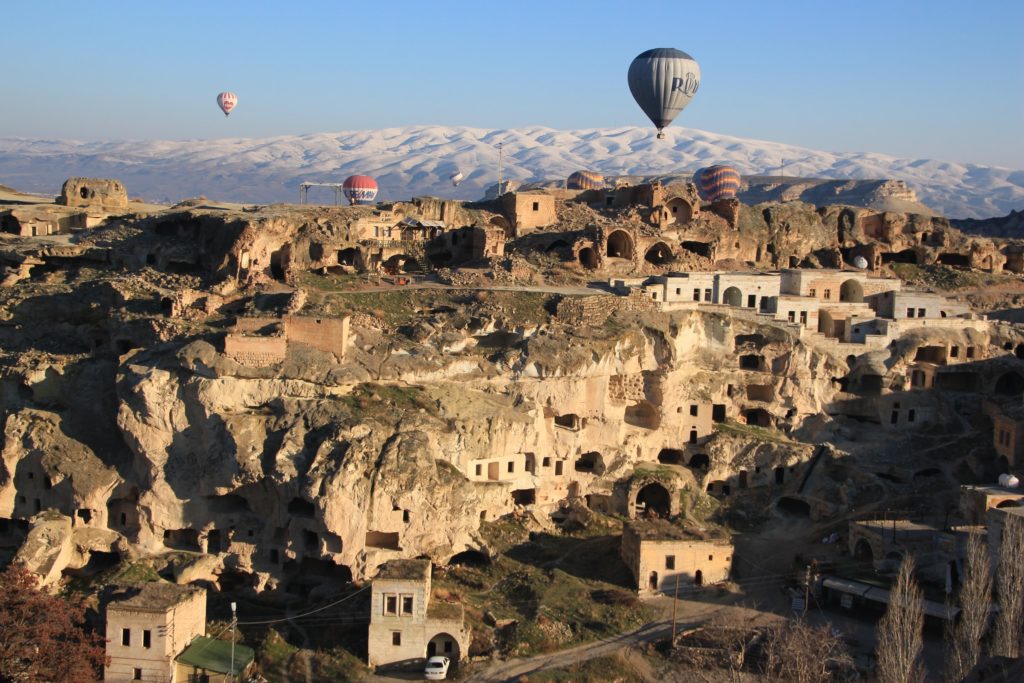 Photo by Thomas Griggs on Unsplash

The village of Goreme is one of the few settlements in Cappadocia that is still occupied to date. It is also the main area for tourists.

This village was known as Avcilar meaning hunters. It was also called Maccan and later known as Goreme, a name it goes by to date.

Goreme means one cannot see in here. The name was arrived at after Christians hid in the caves from the Arabs during the invasion.

9. The rocks were formed millions of years ago

The rocks of Cappadocia near Göreme have undergone several erosion processes. It led to the current shapes of the rocks today.

People that lived in that region carved the rocks and built homes, churches and monasteries. Goreme became a monastic centre in 1200 AD.

The volcanic soil in the region makes this region the best producer of wine. The region is the source of popular red wine brands and white wine that visitors can sample in the many wine tasting shops.

Cappadocia is not only a magical place to be for its landscape but also for music festivals. The festivals include music by local and international artists, food.

The festival runs for the entire week with performances from choirs and orchestras. This festival is held in July in hidden courtyards and old churches.

There is also a Balloon fest in July that celebrates the hot air balloon tradition.