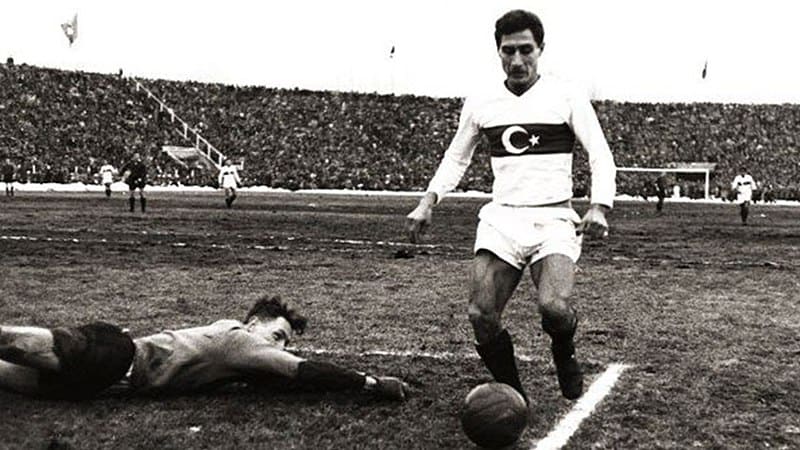 Among all other sports in the world, soccer is, by far, the most popular one. With its team spirit, unique aesthetics and top-level physical side, soccer have been thrilling sport lovers for almost 150 years.

Turkish people are no exception at this point. Like many other countries in the world, soccer is the most popular sport in Turkey. Since the establishment of first football clubs in the early 1900s, Turkish people have been bodacious addicts of this sport.

In our list of “Top 10 Best Turkish Soccer Players”, we will talk about the best soccer players Turkish sport history has ever created. Our list will include both retired and active players who have been successful on national and international level. 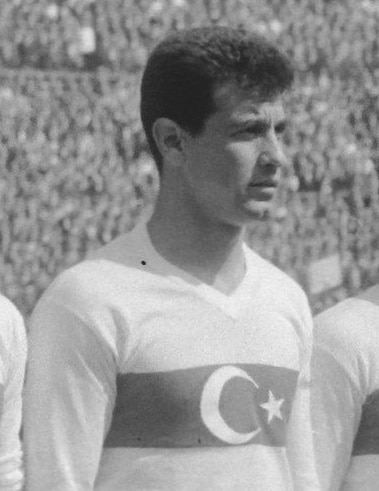 Metin Oktay, who actively played soccer between 1954 and 1979, is known as one of the greatest legends of Turkish soccer history. Metin Oktay played as a forward player for Galatatasaray SK, İzmirspor and SSD Palermo (Italy) and scored 314 goals in his career.

Oktay became a legend after wearing the red-yellow jersey of Galatasaray, which is one of the biggest sport clubs of Turkey. In a short period of time, Oktay (later named as “The Uncrowned King”) turned into a symbol for Galatasaray while winning 5 league titles, 4 Turkish Cups and 2 Presidency Cups. During that time, he became the top goal scorer of Turkish league 6 times. He also broke the goal scoring record in Turkey with 38 goals in one season. This record was later broken by another Galatasaray player, Tanju Çolak, in 1987-88 season.

Oktay also starred in a movie titled “Taçsız Kral” (The Uncrowned King) in 1965, telling the story of his sport life and failed marriage.

Metin Oktay died in a car crash in 1991, leaving lots of amazing memories and great successes behind. As for today, he is recognized as the greatest legend of Galatasaray Sport Club.

Lefter Küçükandonyadis, also known as “Ordinaryus” (Professor in ordinary), is accepted as one of the biggest names of Turkish soccer history and a true legend of Fenerbahçe Sport Club.

Lefter was a Turkish player with Greek origin who was born and grew up in Istanbul and spent almost all his career in Fenerbahçe football team. In Fenerbahçe jersey, Lefter scored 423 goals and won 5 league titles. He also served in Turkish national team and scored 22 goals in 46 matches.

Lefter has been a symbol of success and sportsmanship thanks to his amazing performance on the field and his kind, embracing nature.

In 2009, his statue was erected in Kadıköy, which is the home of Fenerbahçe SK.

The most important player that put his mark in the late 1980s and early 1990s was, without any doubt, Tanju Çolak.

Çolak was a forward player raised in Samsunspor. He was simply a goal machine who broke all the scoring records in Turkish Super League.

Çolak played in 157 games for Samsunspor and scored 123 goals, which was an unbelievable statistic when we consider that Samsunspor was a small team and was no match for big Istanbul teams. In 1987, Tanju Çolak was transferred to Galatasaray and became a legend here. Çolak played 124 games for Galatasaray and scored 116 goals. He also broke the goalscoring record of Metin Oktay by scoring 39 goals in the season of 1987-88.  He became the top goal scorer in Europe with this performance and was awarded with a Golden Boot given by French L’Equipe magazine.

Later, Tanju moved to Galatasaray’s archrival Fenerbahçe and continued to perform as a goal machine there. He scored 50 goals in 54 games while wearing Fenerbahçe jersey. Çolak finished his career at Istanbulspor with a performance of 17 goals in 19 games.

As for today, Tanju is remembered as the most notorious poacher in Turkish soccer history.

Hakan Şükür is probably the most political figure we will mention in our list of “Top 10 Best Turkish Soccer Players”.

Şükür, who was originally a basketball player, began playing professional football in 1987 at Sakaryaspor. After 3 years at Sakaryaspor, and then 2 years at Bursaspor, he was transferred to Galatasaray in the summer of 1992. At Galatasaray, Şükür became a huge star and a top goal scorer. During his soccer career, Şükür played 392 games for Galatasaray and scored 228 goals.

Şükür also had been the most valuable player of Turkish national team by scoring 51 goals in 112 games. During his national team career, Turkey reached the European Championship Finals in 1996 and 2000, and also played in World Cup Finals in 2002.

As for 2020, Şükür is still the all-time top goal scorer in Turkish Super League and Turkish national team history.

On the other hand, Hakan Şükür is officially a “fugitive” as for today and is recognized as a “terror supporter” because of his allegiance to Fethullah Gülen Movement, which is a religious/political group outlawed by Turkish government. Şükür has been living in the USA since 2016 and will be put under arrest if he returns back to Turkey. 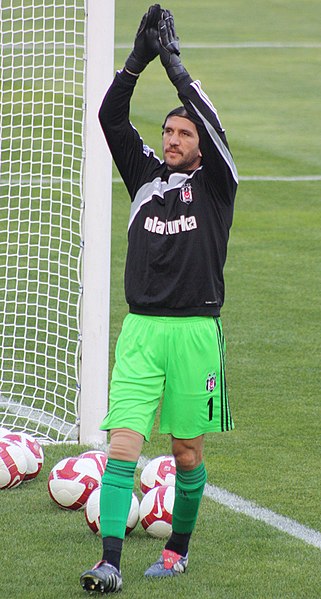 The only goalkeeper in our list of best Turkish players is Rüştü Reçber, who played for teams like Fenerbahçe, Beşiktaş and Barcelona.

Rüştü attracted the attention of soccer lovers while he was playing for Antalyaspor, a small team in Turkish Super League. Soon, he was transferred to Fenerbahçe and was invited to the national team. Rüştü played 294 times for Fenerbhaçe and his performance triggered a move to Barcelona FC, which was Rüştü’s dream since he was a kid. However, Rüştü’s performance was unsatisfying for Barca and soon he returned back to Turkey. In the last 5 years of his career, Rüştü played for Beşiktaş JK, the archrival of Fenerbahçe.

Rüştü showed great success both in club games and national games. He wore the jersey of Turkish national team for 131 times and is currently recognized as the best Turkish goalkeeper of all time. 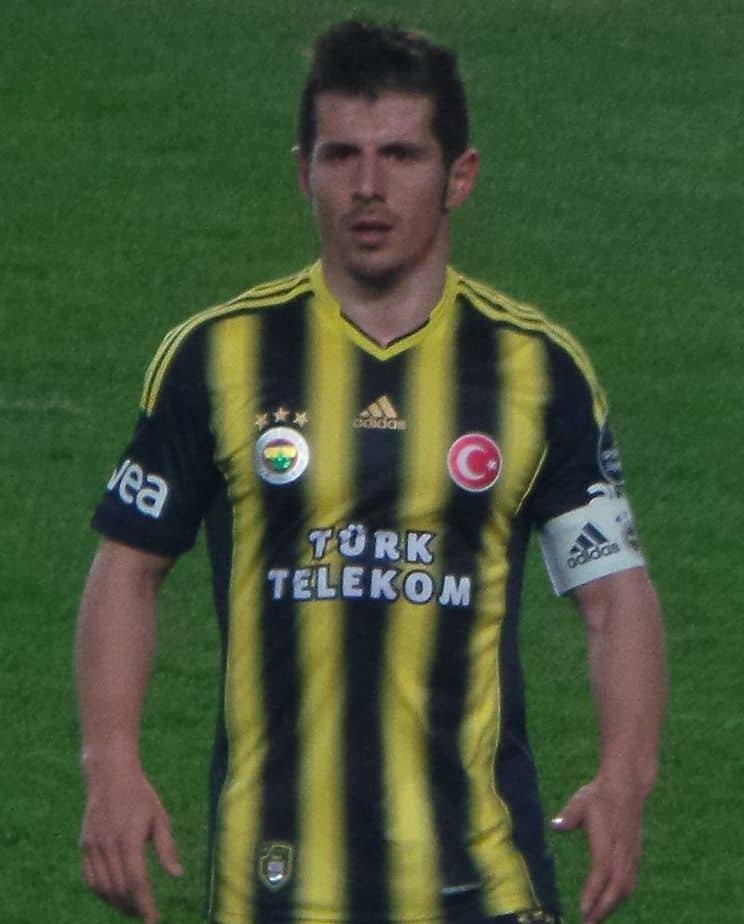 Emre Belözoğlu is one of the most important soccer players who left their mark on the last 20 years of Turkish soccer history.

Emre began his professional career by playing for Galatasaray SK at the age of 16. He even made his Champions League debut at this age against Borussia Dortmund.

Soon, Emre became the most important player of Galatasaray’s and Turkish national team’s midfield. He was great both in defense and in offence thanks to his impressive physical strength and competent technical skills. During his career in Galatasaray, he won 4 league titles, 2 Turkish Cups, 1 UEFA Cup and 1 UEFA Super Cup.

After Galatasaray, Emre played for Inter (Italy) and Newcastle United (England). In 2008, he was transferred to Galatasaray’s archrival Fenerbahçe by leaving Galatasaray fans in anger. Even though Galatasaray fans were irritated by Emre’s choice, he soon became a popular player in Fenerbahçe and took the captain’s armband.

Emre has also been known as a furious player who had lots of arguments with his opponents and the referees, making him both an admired and hated figure on the pitch. 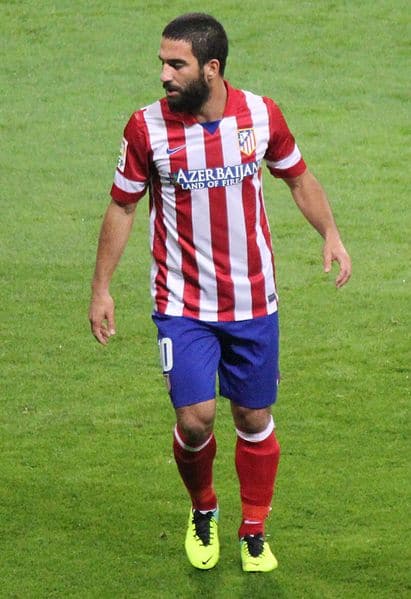 Another controversial figure in our list of “Top 10 Best Turkish Soccer Players” is Arda Turan. Turan has made the headlines for years, thanks to his great sportive achievements and his relationship with popular figures like politicians, singers and television producers.

Arda Turan began his professional career at Galatasaray and soon became the darling of fans. Turan was smart, quick and was good with the ball. He could easily dribble past his opponents and distribute the ball successfully to his teammates. During his time at Galatasaray, Arda Turan played 127 games, scored 29 goals and helped his team to win 2 league titles.

As a result of his efficient play at Galatasaray, Arda Turan moved to Atletico Madrid in 2011 and helped his team to win 1 Europe League Cup, 1 UEFA Super Cup, 1 Spanish league title and 1 Copa Del Rey trophy.

Thanks to his improving performance, Turan was transferred to Barcelona FC with a testimonial of 34 million Euros and signed a 5-year contract. Turan showed a quite good performance in his first months at Barca. However, his performance was begun to be overshadowed by his private life.

Turan’s political comments in favor of conservative Turkish government attracted the criticism of many Turkish fans. Arda’s involvement in a fight at a nightclub in Istanbul and his attack on a Turkish soccer columnist after a national game stirred the anger towards him. Soon, Arda turned to become a hate figure for all sports fans, even including Galatasaray fans. In this period, Arda’s performance began to freefall and he found himself at Başakşehir FC in Turkey, as a player on loan.

Today Arda is still a Barca player but apparently his football career has come to an end in a sad way. 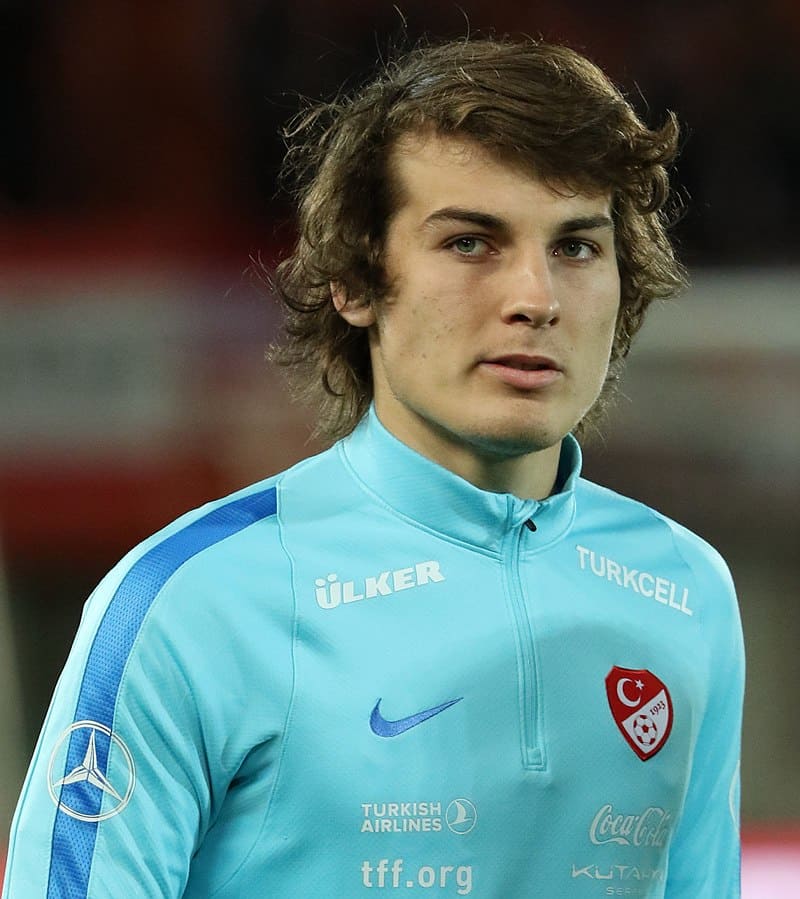 Another young star in our list of “Top 10 Best Turkish Soccer Players” is Çağlar Söyüncü, who is currently playing for Leicester City in English Premier League (EPL)

Çağlar started his professional soccer career at Altınordu FC in Turkey. In 2016, he moved to SC Freiburg in Germany, and after a two years period at the German club, he was transferred to Leicester City in EPL. Soon, Çağlar has become an inevitable part of his team and showed impressive performances as a defender.

Çağlar has also been an essential player for Turkish national team. He wore the red-white jersey 36 times and scored one goal. He is expected to play in European Championship Finals which is planned to be organized in the summer of 2020.

Merih Demiral is recognized as one of the most promising names of Turkish soccer and is currently playing at Italian giants Juventus FC (Italy).

Merih, born in 1998, started his career at Karamürsel İdman Yurdu, an amateur team in Turkey. After getting experienced in some small teams in Turkey, Portugal and Italy, he moved to Italian champions Juventus FC in 2019 with a testimonial of 18 million Euros and signed a contract of 5 years.

With his strong physics and fundamentals, Merih has become a respected defense player in a short period of time. Soccer authorities see him as the future of Turkish soccer and say that his transfer to Juventus is no coincidence.

In his first year at Juve, Merih played in 5 Serie A games and 1 Champions League match, while scoring 1 goal and making 1 assist.

Yusuf Yazıcı is a highly talented attacking midfielder who was raised in Trabzonspor and currently playing for Lille OSC in France.

Yazıcı began his professional soccer life at Trabzonspor in 2015 and soon became the most popular player of his team. Yazıcı’s talent attracted the attention of national team coach and he was invited to the U-19 team of Turkey. Yazıcı increased his performance day by day and eventually, he was transferred to Lille OSC with a testimonial of 17,5 million Euro.

In 2019-2020 season, Yazıcı played in 18 games for Lille and scored one goal. Football authorities think that Yazıcı has a very bright future and has potential of playing for bigger teams of Europe.